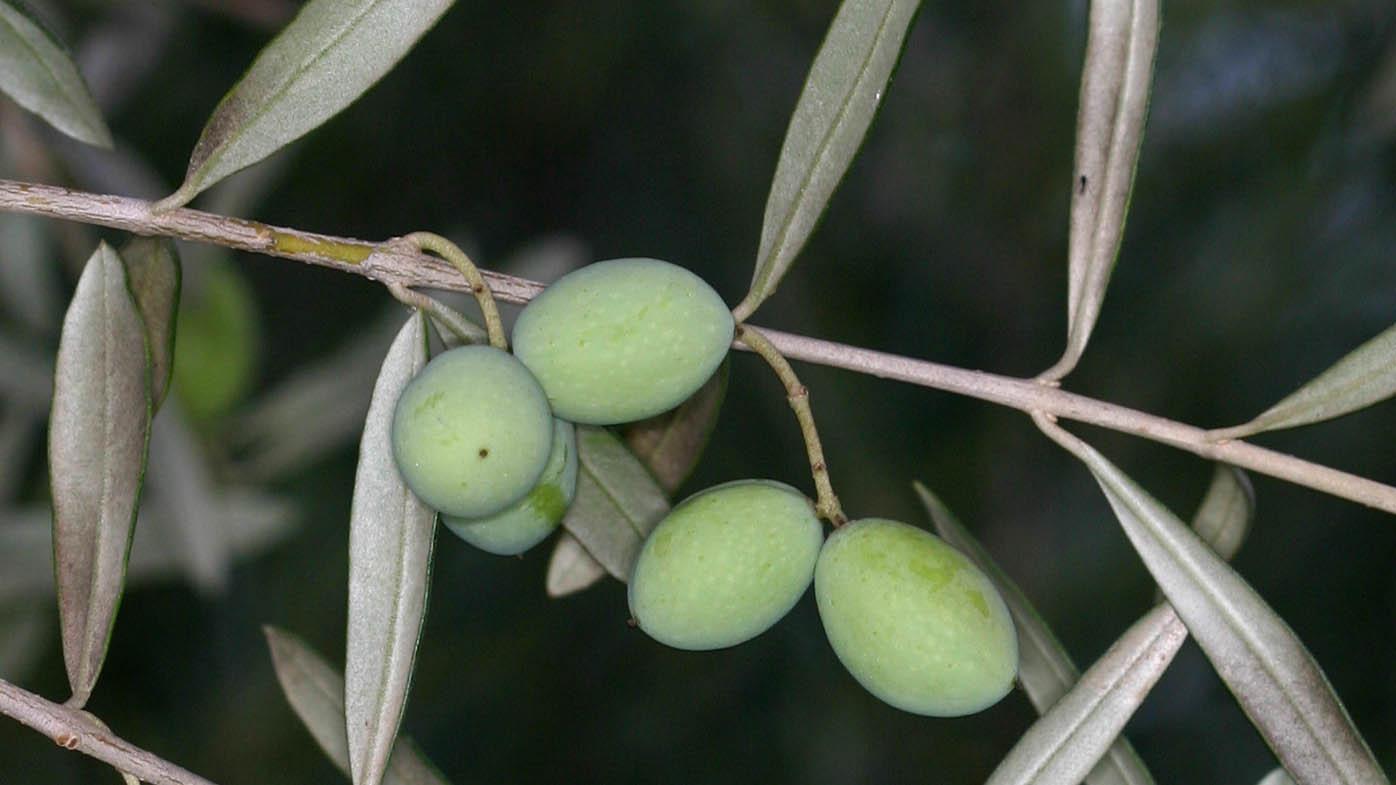 General Description
Kew's Herbarium contains a wreath of folded olive leaves which was found in the sarcophagus of King Tutankhamun and is over 3,300 years old.

Its primary product, olive oil, is revered throughout the world for its distinctive flavour. Homer called it 'liquid gold'. In ancient Greece athletes rubbed olive oil over their bodies and victorious competitors received no trophies or medals - instead the symbol of supreme honour was the olive wreath placed on their heads.

There are claims of 1,600 year-old trees still producing fruit.

This species is widely distributed across the Mediterranean region, Africa and Asia.

Overview:  Olea europaea  is an evergreen shrub or tree, which grows up to 15 m tall. It is slow to mature but can live for hundreds of years.

Flowers:  The flowers are borne in axillary clusters, with a four-lobed calyx, and a four-lobed corolla. The two stamens (male parts) project beyond the mouth of the flower.

Fruits:  The fruit has a hard endocarp (the olive stone), which is surrounded by a fleshy, edible mesocarp.

Subspecies  europaea  is distributed around the Mediterranean as both the cultivated olive (var.  europaea ) and its feral relative (var. sylvestris ).Subspecies  cerasiformis  is restricted to the island of Madeira.Subspecies  guanchicaoccurs only on the Canary Islands.Subspecies  maroccana  is to be found as a small population at the southern end of the High Atlas Mountains of Morocco.The isolated Saharan massifs of the Hoggar, Air and Jebel Marra also have a distinct subspecies,  laperrinei .The remaining subspecies,  cuspidata , occurs widely through eastern and southern Africa, Arabia, and across Asia as far as southern China.

There are over 1,000 cultivars of olive, which have much larger, fleshier fruits (drupes) than their wild ancestor, which grows throughout the Mediterranean.

Grown in the Mediterranean for over 5,000 years, the olive has shaped the landscape and culture of the region: 90% of all olives are produced in the Mediterranean. It is the region's most versatile and valuable crop with the fruit, oil and leaves having been used for food, fuel, medicine and embalming.

The birth of olive-farming is shrouded in the mists of time. Discoveries of olive stones at archaeological sites in Israel show at least 20,000 years of use and by 5,000 years ago olives had been taken into cultivation and spread throughout the Levant. Domestication may have taken place in the eastern Mediterranean region, or in the region of the Nile Delta where the climate of the time would have been more suitable for cultivation. Today, there are thought to be around 1,000 million olive trees in the world.

Olives are harvested in autumn. If they are to become table olives they are soaked in water for five days to extract the bitter phenolic compounds such as oleuropein. The fruit is then cured in brine for around four weeks. Green olives are unripe, whereas black olives are ripe and less bitter. Olives are eaten as snacks or appetisers with a variety of accompaniments, and are a key ingredient of Mediterranean cooking.

Olive oil is used for food, cooking and for a multitude of therapeutic purposes.

The safe dosage for adults is two tablespoons (28 g) of olive oil per day. Evidence suggests that people whose diets include olive oil have a reduced risk of developing breast and colorectal cancers. Likewise, a diet rich in olive oil (and low in saturated fats) is associated with reduced risk of cardiovascular disease, high cholesterol levels and high blood pressure.

The beneficial qualities of olive oil have been attributed to the fatty-acid composition and the presence of phenolic compounds, which seem to have antioxidant, vasodilating, antiplatelet and anti-inflammatory effects. Kew is investigating how the waste products of olive oil production could be used as sources of compounds for medicines to treat cardio-vascular disease.

The fine texture and intricate grain of olive wood is sought after for turnery and furniture, although it is difficult to work with due to the density (it is very hard and heavy). Olive wood and olive stones are excellent for fuel.

Olive trees are planted for ornamental purposes, as firebreaks and to control soil erosion in Mediterranean climates.

Number of seed collections stored in the Millennium Seed Bank:  11

Seed storage behaviour:  Published literature compiled in the Seed Information Database (SID) indicate that this species' seeds survive drying to low moisture content and cooling to sub-zero temperatures and are thus amenable to long-term storage in facilities such as the Millennium Seed Bank. However, survival in storage may be quite short, and more research is needed.

Germination testing:  Collections so far tested at the MSB have failed to pass germination tests. However, seeds remaining at the end of the tests are healthy, indicating dormancy rather than low viability, and work is continuing to establish appropriate dormancy-breaking treatments.

Young olive plants are grown from seed in the Arboretum Nursery. It has been noted that germination is spasmodic, taking from a few weeks to a few months. The compost used as a growing medium is an open, gritty, free-draining mix.

The seedlings are pricked out into 'air pots'. Air pots prevent the plants from becoming pot-bound by encouraging the roots to grow outwards rather than spiralling. Planting out into the required position in the garden can be carried out straight from the air pot. The glasshouse zone in which the seedlings are grown is kept at a minimum temperature of 5˚C. Only natural light is provided. The young plants are well watered and not allowed to dry out.

Many of the trees growing in the Mediterranean Garden are over 100 years old, having survived transplantation whilst mature to provide instant impact. These trees were sourced from a nursery in northern Italy, which purchases them from land-owners when they need to remove or replace them, and hence ensures a longer life for these trees.

The oldest of Kew's herbarium specimens is a wreath of folded olive leaves, which was found in the sarcophagus of King Tutankhamun. This well-preserved olive wreath is over 3,300 years old. Details of specimens of Olea europaea , including images, are available online in the Herbarium Catalogue.

In the summer of 2006 several mature trees were planted in a newly-landscaped Mediterranean setting. These included specimens of cork oak ( Quercus suber ), stone pine ( Pinus pinea ) and an olive ( Olea europaea ).

Tony Hall, who manages this collection, notes that olives respond well to the sandy, free-draining soil at Kew. In the winter of 2008 they survived snow, frost and temperatures of -7˚C. So far, flowers and small fruits have been observed, but ripening of the fruits has yet to occur at Kew. 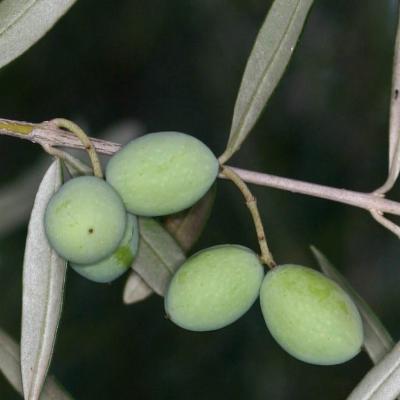 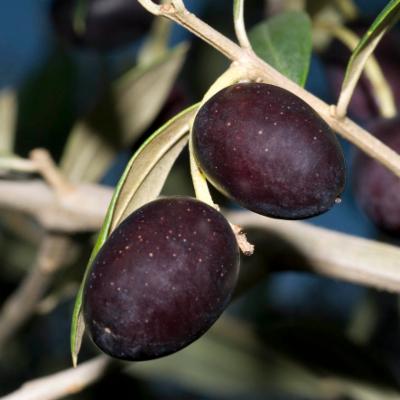 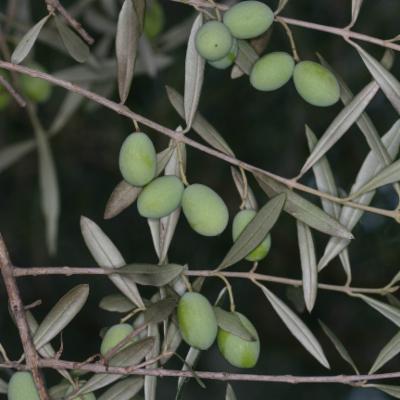 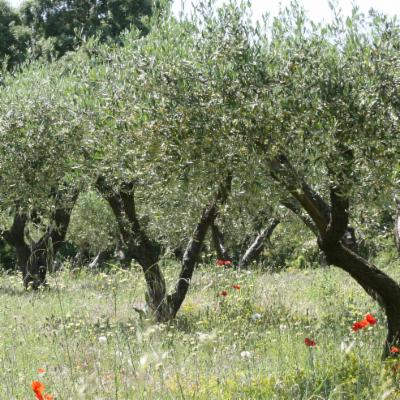 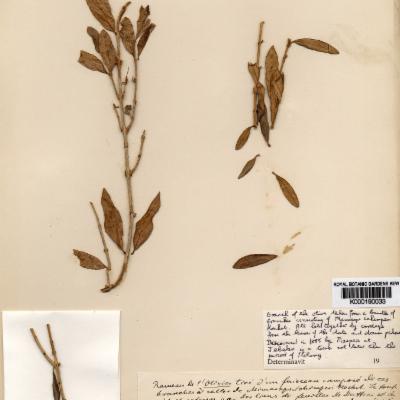 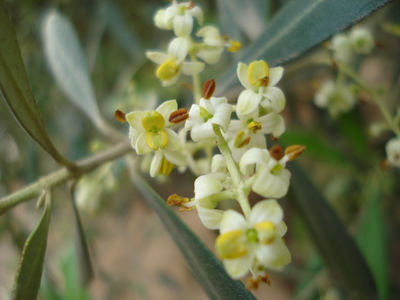 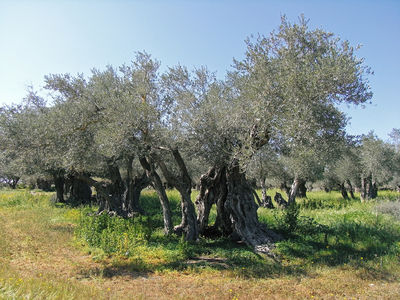 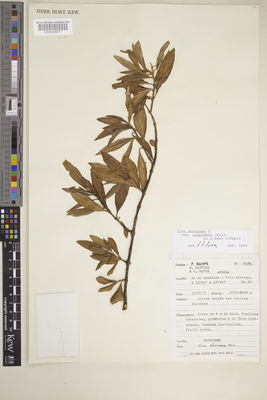 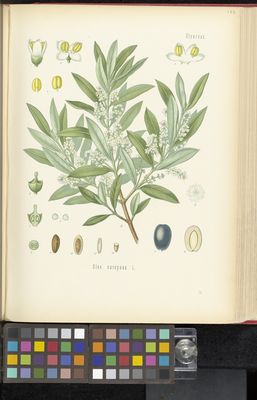 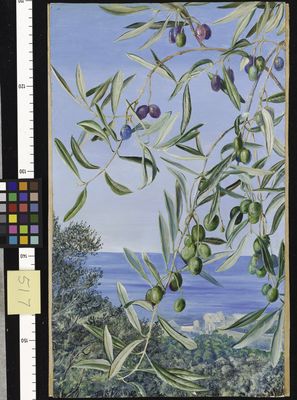 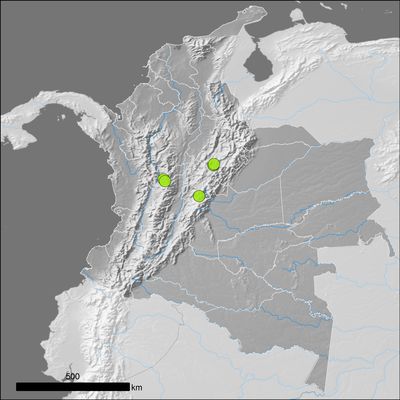