The monkey puzzle or Chile pine (Araucaria araucana) is an evergreen conifer native to Argentina and Chile. It was discovered in about 1780 by a Spanish explorer and introduced to England by Archibald Menzies in 1795. Menzies was a plant collector and naval surgeon on Captain George Vancouver's circumnavigation of the globe, travelling in Captain James Cook's old ship, HMS Discovery. He was served the seeds of this conifer as dessert while dining with the governor of Chile and later sowed them in a frame on the quarter deck, returning home to England with five healthy plants. One of these monkey puzzles could be seen at Kew until it died in 1892. 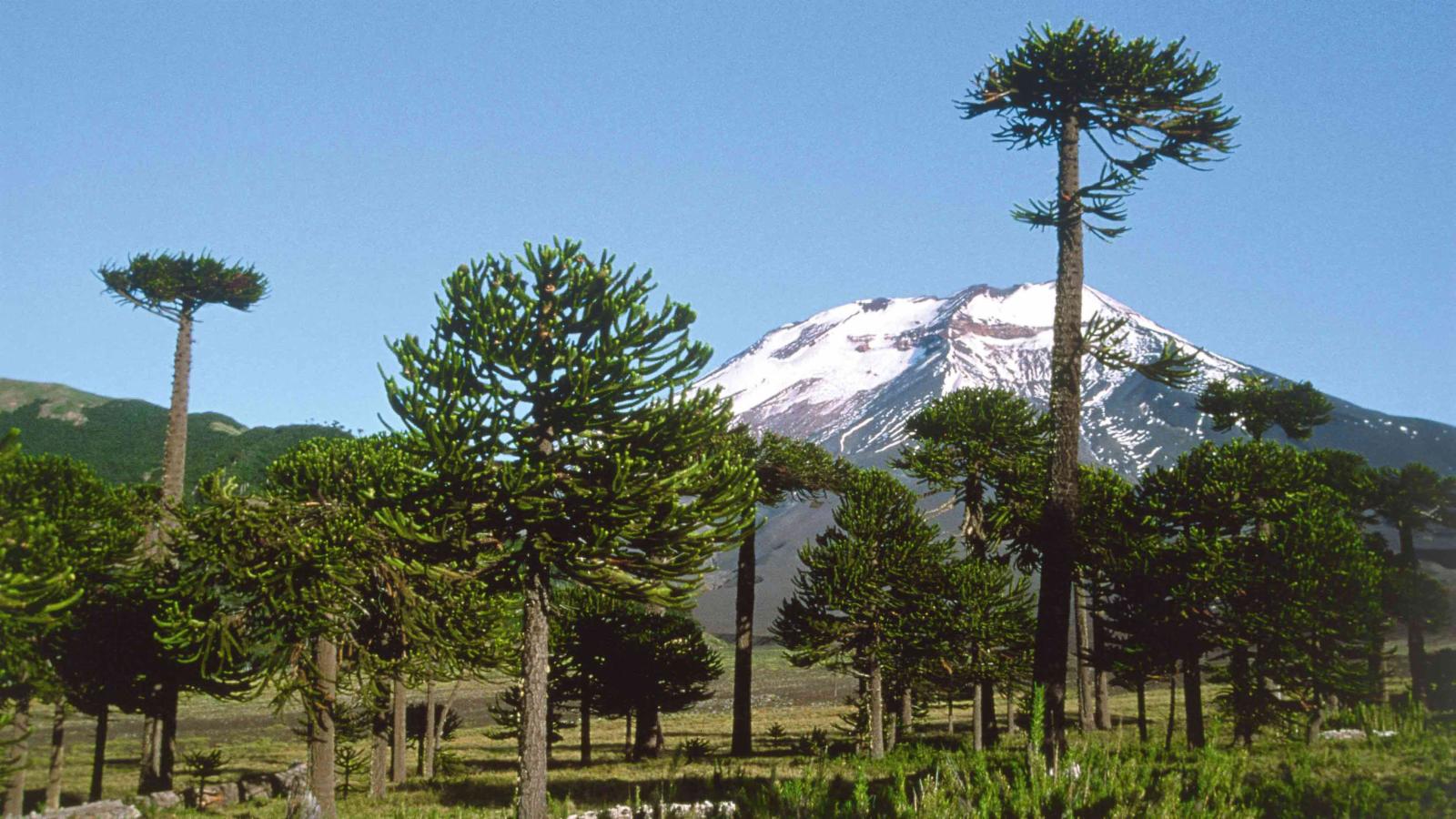 The monkey puzzle or Chile pine (Araucaria araucana) is an evergreen conifer native to Argentina and Chile. It was discovered in about 1780 by a Spanish explorer and introduced to England by Archibald Menzies in 1795. Menzies was a plant collector and naval surgeon on Captain George Vancouver's circumnavigation of the globe, travelling in Captain James Cook's old ship, HMS Discovery. He was served the seeds of this conifer as dessert while dining with the governor of Chile and later sowed them in a frame on the quarter deck, returning home to England with five healthy plants. One of these monkey puzzles could be seen at Kew until it died in 1892.

The common name alludes to the fact that the task of climbing the tree, with its sharp branches tightly clothed with spiny leaves, would puzzle even a monkey.

Native to southwest Argentina and southern and central Chile, where it grows at 600 to 1,800 m above sea level.

An evergreen, pyramid-shaped tree, the monkey puzzle grows up to 50 m high with a trunk circumference of up to 2.5 m. The tree's most distinguishing feature is its leaves. They are stiff, dark green and glossy with a spiny tip and completely cover each branch, closely overlapping each other. The visual effect is wholly unusual and while many consider the appearance of the tree majestic, others find its scaly, almost reptilian foliage somewhat scary. The horizontal branches are produced in tiers and have few side branches. The female cone is globular and up to 20 cm in diameter; the male cone is cylindrical and up to 15 cm long. Trees normally have cones of only one sex, rarely both.

The monkey puzzle is well-adapted to fire, volcanic activity having long caused wildfires in its natural habitat, so this is not a threat under natural circumstances. However, fires resulting from human activities (especially agricultural clearances) cause severe damage to remaining populations of the tree. Research in Chile, carried out under the auspices of the Flagship Species Fund of the U.K.'s Department of Environment, Food and Rural Affairs (Defra) and Flora & Fauna International (FFI), found at least 80% of the trees remaining in one study area had suffered fire damage.

Despite being officially declared a Natural Monument in 1990 (making it an offence to cut down wild trees), forests outside of protected areas are still subject to high levels of damage due to burning, grazing and conversion to commercial plantations. The majority of the forests occur in a relatively small area of the Chilean and Argentinean Andes; the most threatened populations are in the coastal cordillera in southern Chile. Araucaria araucana is listed in CITES (the Convention on International Trade in Endangered Species of Wild Fauna and Flora) Appendix 1, which includes species threatened with extinction. Trade in specimens of these species is permitted only in exceptional circumstances.

The name Araucaria araucana comes from the Araucanos, a group of Amerindian tribes of the Araucana linguistic family, some of whom still live in Chile and Argentina. The Araucanos consider monkey puzzles to be sacred. They traditionally ate the seeds (piñones), which although edible, taste better roasted than raw. Piñones continue to be an important part of the diet of Araucanos living close to monkey puzzle populations. The dried seeds are made into a flour, which the Araucanos then use to make a fermented beverage (muday). The seeds are also fed to livestock, especially during the winter.

Local people used to cut trees for fuelwood and construction, but large-scale logging of Araucaria forests followed the arrival of Europeans in the region in the 19th century. Monkey puzzle was at one time considered to be the most valuable timber in the southern Andes, being used for railway sleepers, pit props in mines, ship masts, and for paper pulp. In the 1940s, it was even reported as being used in the construction of aeroplanes.

A recent study indicates that local communities have begun to replant degraded areas of logged forest with Araucaria araucana and other useful native plant species. Indigenous knowledge and the involvement of local communities could play a role in developing sustainable use strategies in the future.

The monkey puzzle is often planted as an ornamental in parks and gardens, where its unusual appearance is admired. In the UK, it was most widely planted in the Victorian era. However, because it grows to a great height and gardens have become smaller, its popularity has waned. Nevertheless, the sight of a monkey puzzle tree (especially a mature specimen bearing cones) will often arouse curiosity and comments from passers-by.

The planting of  Araucaria araucana  was a popular means of creating impressive avenues on large estates in the UK and other countries in the 19th century, such as this example in Bicton Gardens, Devon (image, right). Younger trees have since been planted to replace those damaged in the 1987 storm.

Number of seed collections stored in the Millennium Seed Bank: None.

One monkey puzzle, which stands beside the Orangery, was planted in 1978. There are other specimens planted in the Pinetum by the Lake, including two recently collected on a Kew expedition to the tree's native homeland of Chile.

A grove of monkey puzzles can be seen in Bloomer's Valley at Kew's sister garden Wakehurst.

The Economic Botany Collection contains 23 specimens of Araucaria araucana , including cones, seeds and samples of the wood. Dried and spirit-preserved specimens of monkey puzzle are held in the behind-the-scenes Herbarium, where they are made available by appointment to researchers.

Distribution
Argentina, Chile
Ecology
Mixed deciduous and evergreen forest, or growing as pure stands; in moist loamy soil or in stabilised volcanic ash; on the lower slopes of mountains.
Conservation
Endangered (EN) according to IUCN Red List criteria. Declared a Natural Monument in Chile in 1990.
Hazards

The rigid spines on the trunk and leaf tips are potentially hazardous. This is a tree to avoid climbing!

Conservation
Araucaria araucana is rated as Endangered (EN) according to IUCN Red List criteria and has received a EDGE score of 3.35, which places it in position 9 on the EDGE Gymnosperm list. It has a Evolutionary Distinctiveness of 67.71, ranked 17. More information on the EDGE Gymnosperm project here https://www.edgeofexistence.org. 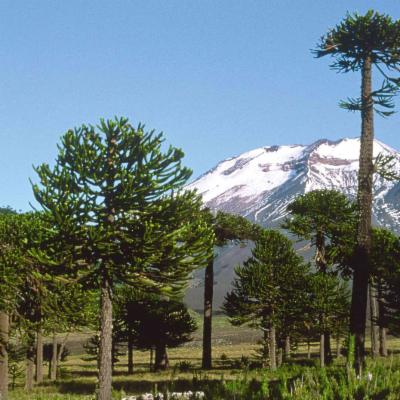 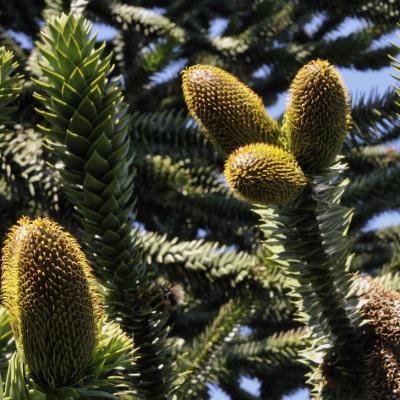 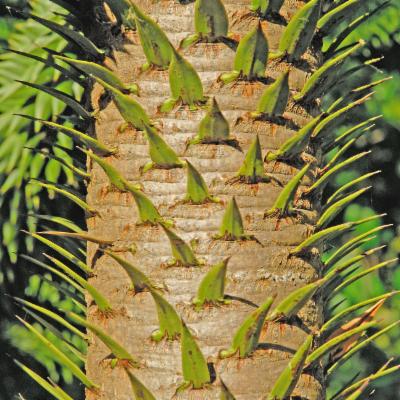 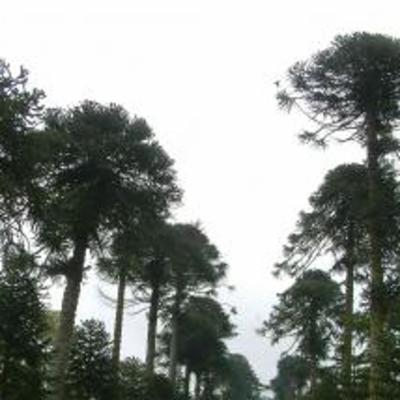 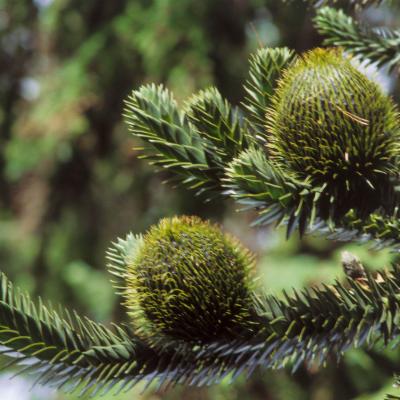 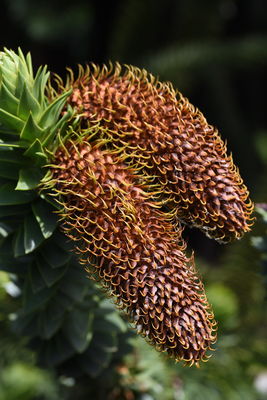 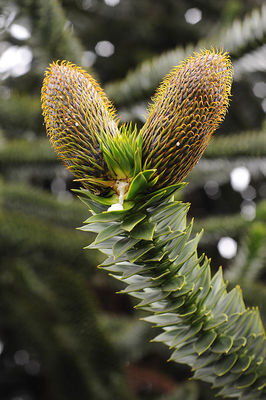 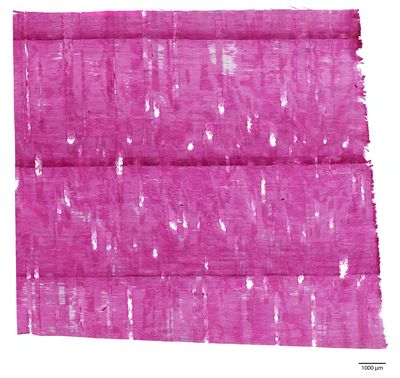 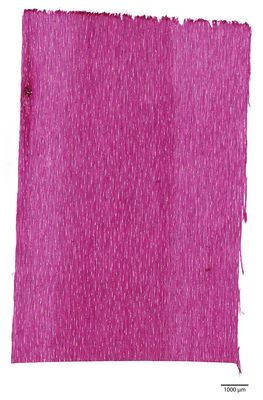 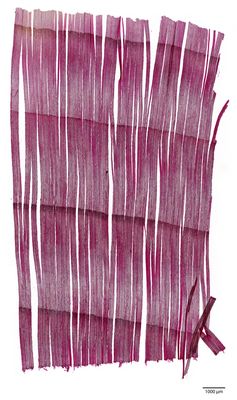 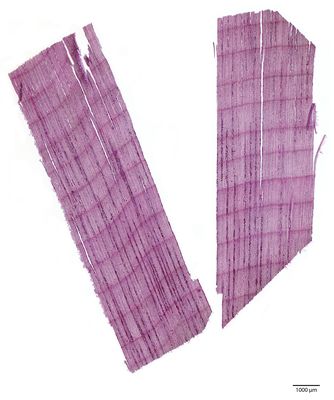 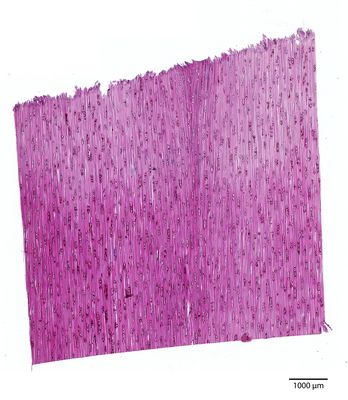 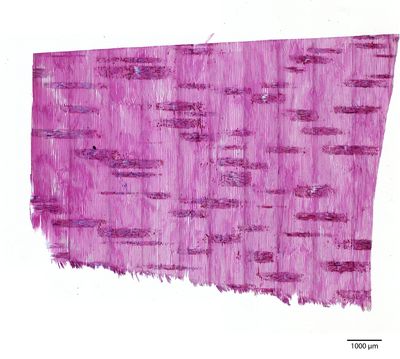 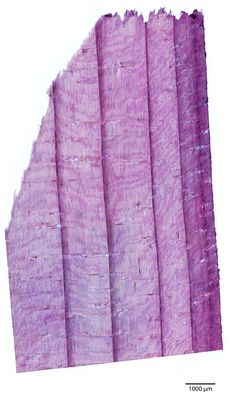 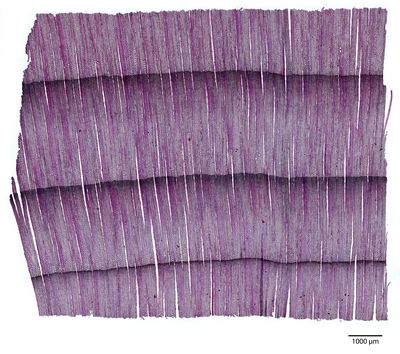 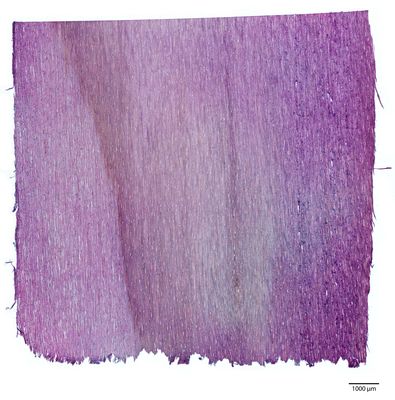 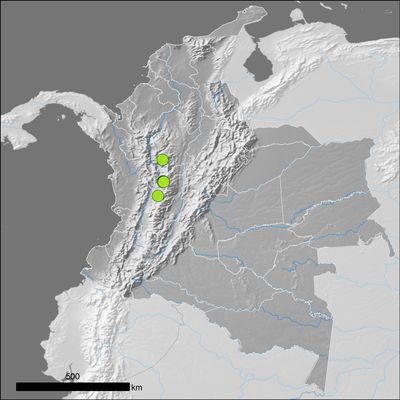 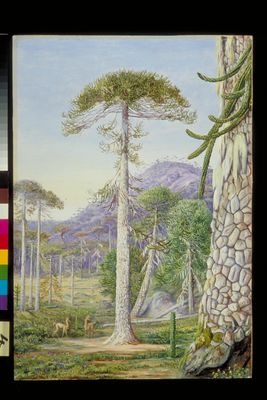