Brassica oleracea has been cultivated for at least 2,000 years, possibly much longer, and a wide variety of forms have been developed. Although considerably different in general appearance, cabbage, kale, kohlrabi, cauliflower, broccoli and Brussels sprouts are all cultivars of Brassica oleracea. 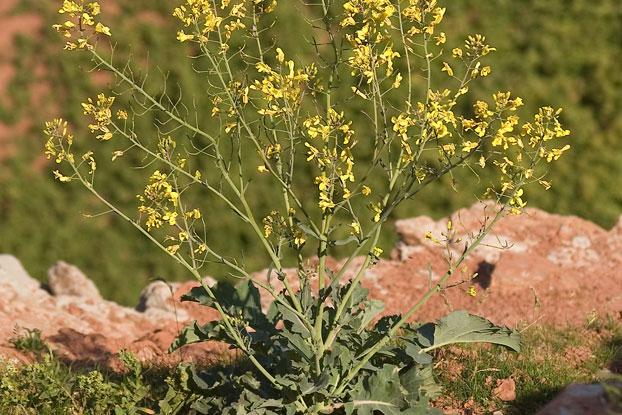 Brassica oleracea has been cultivated for at least 2,000 years, possibly much longer, and a wide variety of forms have been developed. Although considerably different in general appearance, cabbage, kale, kohlrabi, cauliflower, broccoli and Brussels sprouts are all cultivars of Brassica oleracea.

Brassica oleracea is native to the Mediterranean region and southwestern Europe, as far north as southern England. It is found growing wild on seaside cliffs.

Fruits: A short-beaked siliqua (fruit divided into two cells by a thin partition) up to 10 cm long, round in cross-section.

Brassica vegetables are consumed in large quantities across the globe. They are an important source of dietary fibre, vitamins C and E, a range of B vitamins and carotenes. Their distinctive bitter flavour is due to the presence of glucosinolates, which can be toxic in certain circumstances but are also credited with potential anti-cancer activity.

Marrow-stem kale, 1000-headed kale and kohlrabi are examples of cultivars grown for livestock feed and forage; kohlrabi is also eaten by humans as a raw and cooked vegetable.

Cabbages with white, pink, green and purple foliage, sometimes with fringed margins, are cultivated as ornamentals. They are considered to be attractive in garden borders and are sometimes used in fresh flower arrangements. Ornamental kales with white or pink markings on the leaves are available.

There are considered to be eight main cultivar groups:

Also known as winter greens, these non-heading cultivars are probably the most similar in appearance to wild cabbage. Cultivars with coloured leaves are grown as ornamentals. Jersey longjacks have tall, woody stems that are used for walking-sticks. Other cultivars are grown for livestock feed and forage.

Leaves of these cultivars are used in Chinese, Vietnamese and Thai cuisine.

Bearing edible inflorescences in compact heads, these are popular vegetables served raw or boiled and are often accompanied with a white sauce. They are also used in pickles. Forms of cauliflower suitable for hot and humid climates have been developed in India over the past 200 years.

Developed in Germany by the 12th century, these have a large, edible, terminal bud. Savoy cabbage has puckered leaves and is shredded for use in coleslaw. Red cabbage contains the pigment anthocyanin and is used for pickling. Sauerkraut is fermented shredded cabbage leaves that is popular in Germany and some other European countries.

Developed in Belgium in the 18th century, this form has dense, compact, axillary buds (like mini-cabbages) packed tightly on a single, upright stem.

Bearing a white, green or purple, turnip-like, edible swollen stem (5-12 cm wide).These first appeared in Europe in the 15th century and are consumed as a boiled vegetable or used as livestock-feed.

Bearing edible inflorescences not compacted into a single head, these cultivars became popular in northern Europe in the 18th century. They are alleged to reduce the incidence of bladder and colorectal cancers.

More than 20 collections of Brassica oleracea seeds are held in Kew's Millennium Seed Bank based at Wakehurst in West Sussex.

Brassica oleracea can usually be seen growing in the Plant Family Beds and Student Vegetable Plots at Kew.

Specimens of Brassica oleracea seeds and seed oil, Jersey cabbage walking sticks and wool dyed with it are held in Kew's Economic Botany Collection, where they are available to researchers by appointment.

Contains glucosinolates, which can cause goitre (enlargement of the thyroid gland) if consumed in large quantities (although also thought to provide protection against cancer). 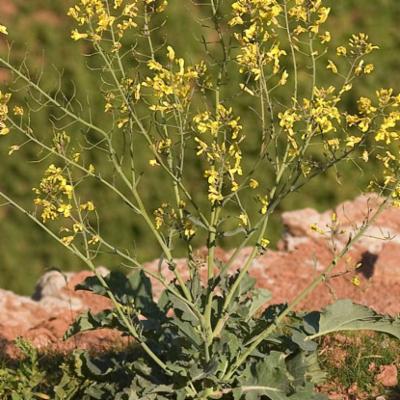 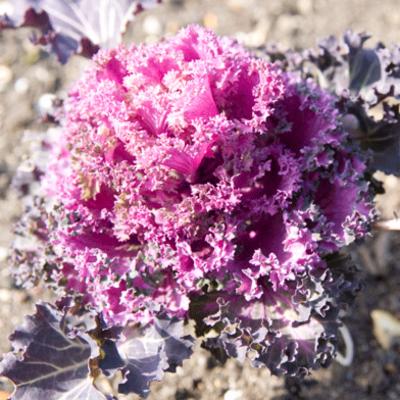 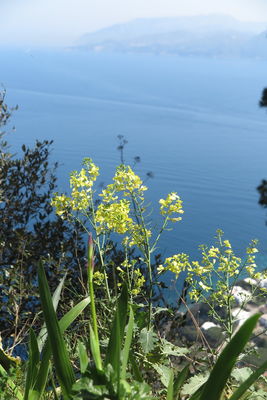 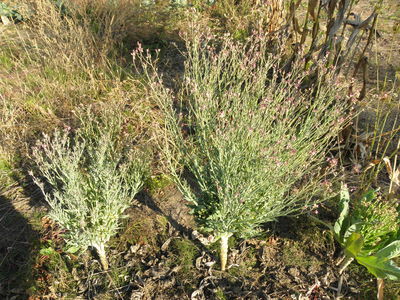 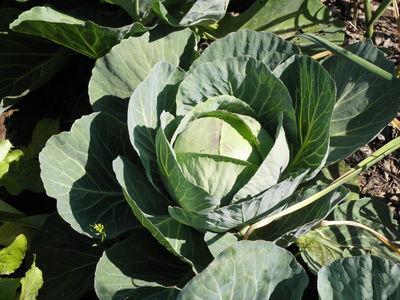 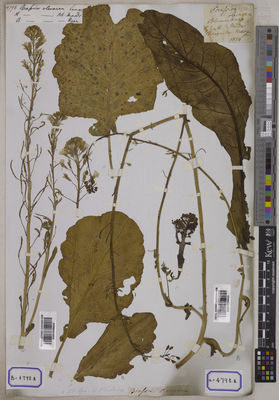 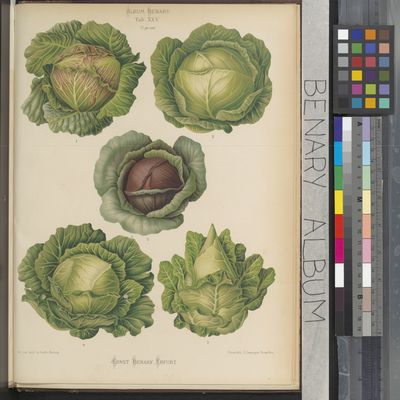 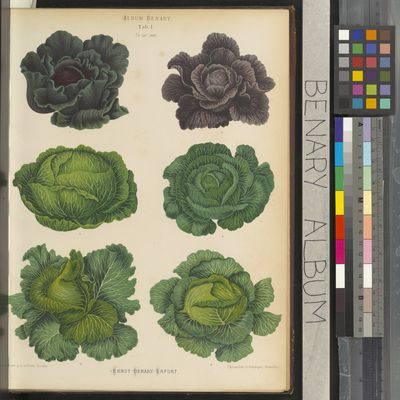 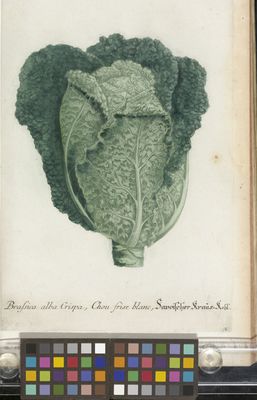 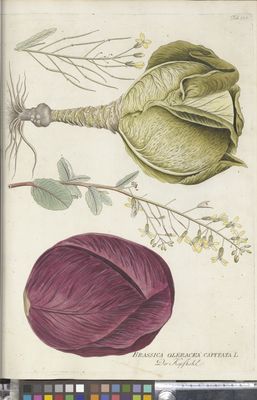 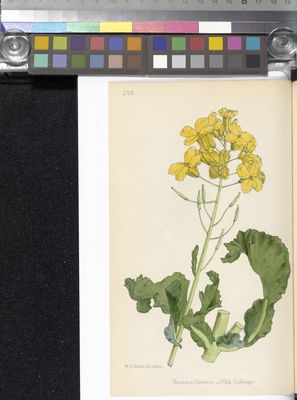 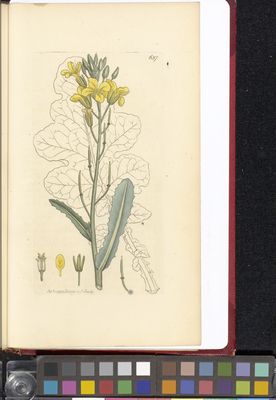 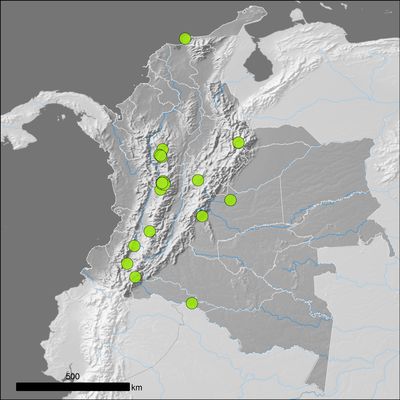