Despite its common name, Chilean blue crocus is not a true crocus at all, and instead belongs to the plant family Tecophilaeaceae. The genus Tecophilaea (meaning 'lover of children') was named after Tecophila, the daughter of the Italian botanist Luigi Colla (1766-1848). 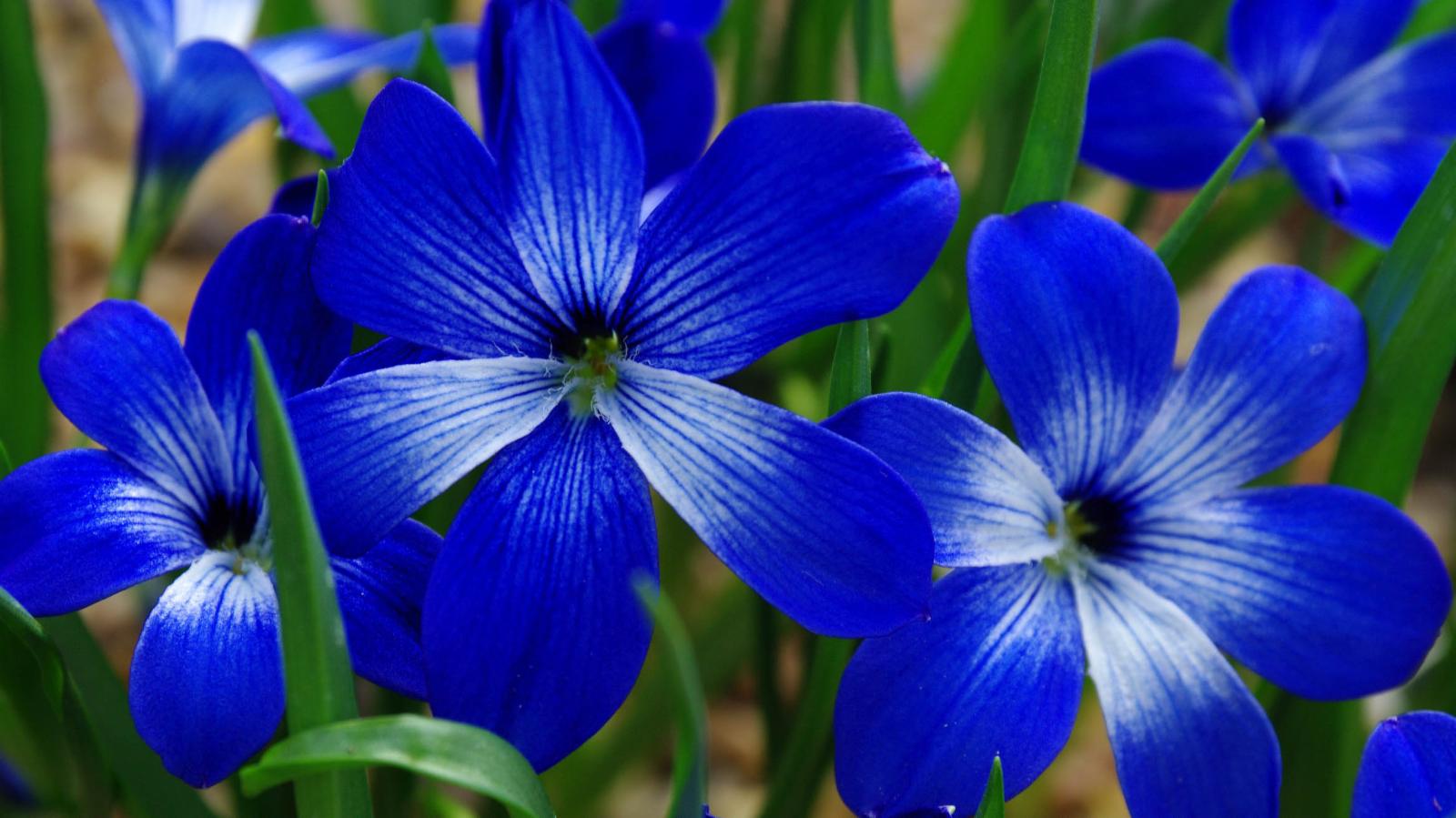 General Description
Chilean blue crocus has brilliant blue flowers, and was thought for many years to be extinct in the wild.

Despite its common name, Chilean blue crocus is not a true crocus at all, and instead belongs to the plant family Tecophilaeaceae. The genus Tecophilaea (meaning 'lover of children') was named after Tecophila, the daughter of the Italian botanist Luigi Colla (1766-1848).

Tecophilaea cyanocrocus has scented, cobalt-blue flowers with a white centre, and grows from a storage organ known as a corm. It was formally described by the German botanist Friedrich Leybold in 1862, and was only known to grow in the range of hills around Santiago (Chile), at about 3,000 m above sea level. From around 1950, Chilean blue crocus was thought to be extinct in the wild, due to over-collecting (corms were dug up in large quantities for export, mainly to Europe), over-grazing and habitat destruction. However, in the spring of 2001, a large population was discovered on private land south of Santiago.

Native to central Chile (near Santiago), where it grows in the Andes mountain range, on dry, stony slopes, from about 2,000-3,000 m above sea level.

Overview: The corm (short, underground, swollen stem) is small (about 1 cm in diameter), with a whitish, fibrous tunic.

Leaves:  The leaves, of which there are two or three, are flat or canaliculate (channelled), bright green, up to 10 cm long and 1 cm wide.

Flowers: The leafless flower stalks are up to 8 cm long. The trumpet-shaped flowers are deep blue, pale blue or purple, about 2.5 cm across and 4 cm long. The flowers have a constricted throat and six perianth segments with a fringe of hairs at the base. There are three fertile stamens and three sterile ones at the mouth of the tube. The ovary is semi-inferior.

Fruits:  The fruit is a small, rounded capsule containing a few small seeds.

Chilean blue crocus was considered to be extinct in the wild from around the 1950s, mainly as a result of corms being dug up from the wild and exported (a trade which proved to be unsustainable) and over-grazing. Kew and the Corporación Nacional Forestal (CONAF) (Chile's national forest corporation), with support from the Alpine Garden Society, initiated a plan to reintroduce it to the wild.

Plants were successfully cultivated at Kew, and different populations were sampled to test how much genetic diversity remained in the cultivated plants. These tests showed that, although the plants grown at Kew were genetically uniform, inclusion of plants from other collections increased the genetic variability considerably. However, in the spring of 2001, a thriving population of Tecophilaea cyanocrocus was discovered in the wild near Santiago, before the attempts at reintroduction had begun. Today, Chilean blue crocus is considered to be rare in the wild and to be vulnerable to land use changes.

Chilean blue crocus is cultivated as an ornamental. There are a number of different cultivars, including Tecophilaea cyanocrocus 'Leichtlinii' (formerly given varietal status), the flowers of which have a prominent white throat. Like the species itself, this cultivar has received an Award of Garden Merit from the Royal Horticultural Society.

Cultivation of Chilean blue crocus is quite straightforward. At Kew, free-draining compost is used and the corms are re-potted each year in August. After re-potting, the pots are plunged into a sand bed, and both the pots and the sand are watered. The sand is kept damp until the corms come into growth, when they are watered freely. Watering is reduced as the plants die back for their summer rest. During this resting period, the pots are sprayed about once a fortnight, to prevent them from drying out completely. The pots are kept in a glasshouse to protect them from hard frosts but the plants will often survive outside in milder parts of the UK, as long as they do not get too wet in the summer. Propagation is mostly by corm offsets, though occasionally seed is sown in the spring. Seedlings are left undisturbed in the seed pots for about three years, so that when it is time to separate them and put them into bigger pots, they have already formed a small corm, and damage during re-potting is less likely. Flowering occurs after about five years, when the electrifying blooms put on a dazzling display.

Tecophilaea cyanocrocus can be seen growing in the Davies Alpine House and Rock Garden at Kew, where it usually flowers during February or March.

Pressed and dried specimens of Chilean blue crocus are held in Kew's Herbarium, where they are available to researchers by appointment. The details, including images, of some of these can be seen online in Kew's Herbarium Catalogue. 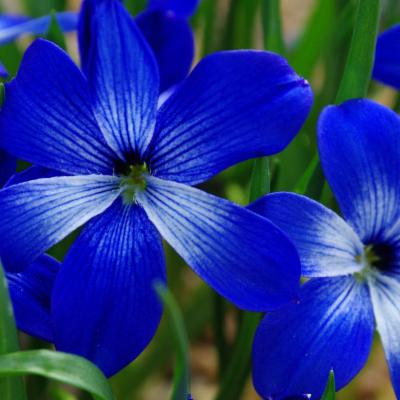 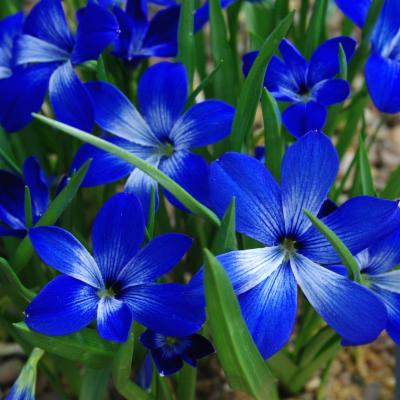 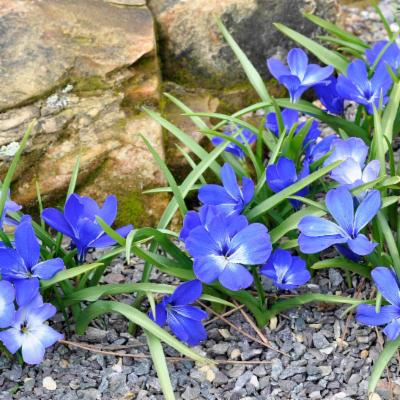 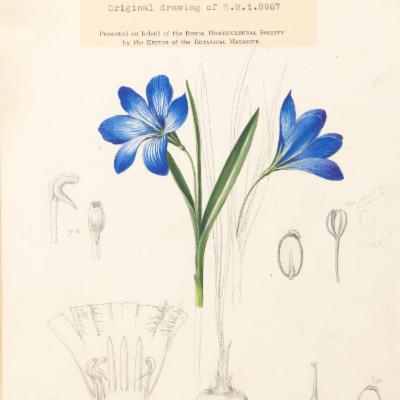 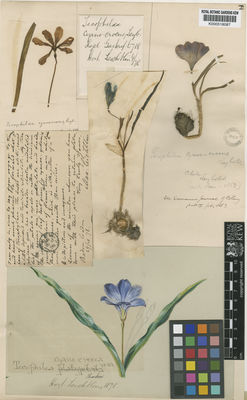