Watermelon is a member of the cucurbit family (Cucurbitaceae), which includes cucumbers (Cucumis sativus), melons (Cucumis melo, for example), loofahs (Luffa species), and pumpkins and squashes (Cucurbita species). The generic name Citrullus is the diminutive of Citrus, perhaps referring to the spherical fruit. The specific epithet lanatus (meaning woolly) refers to dense woolly hairs on young parts of the plants, particularly stems. 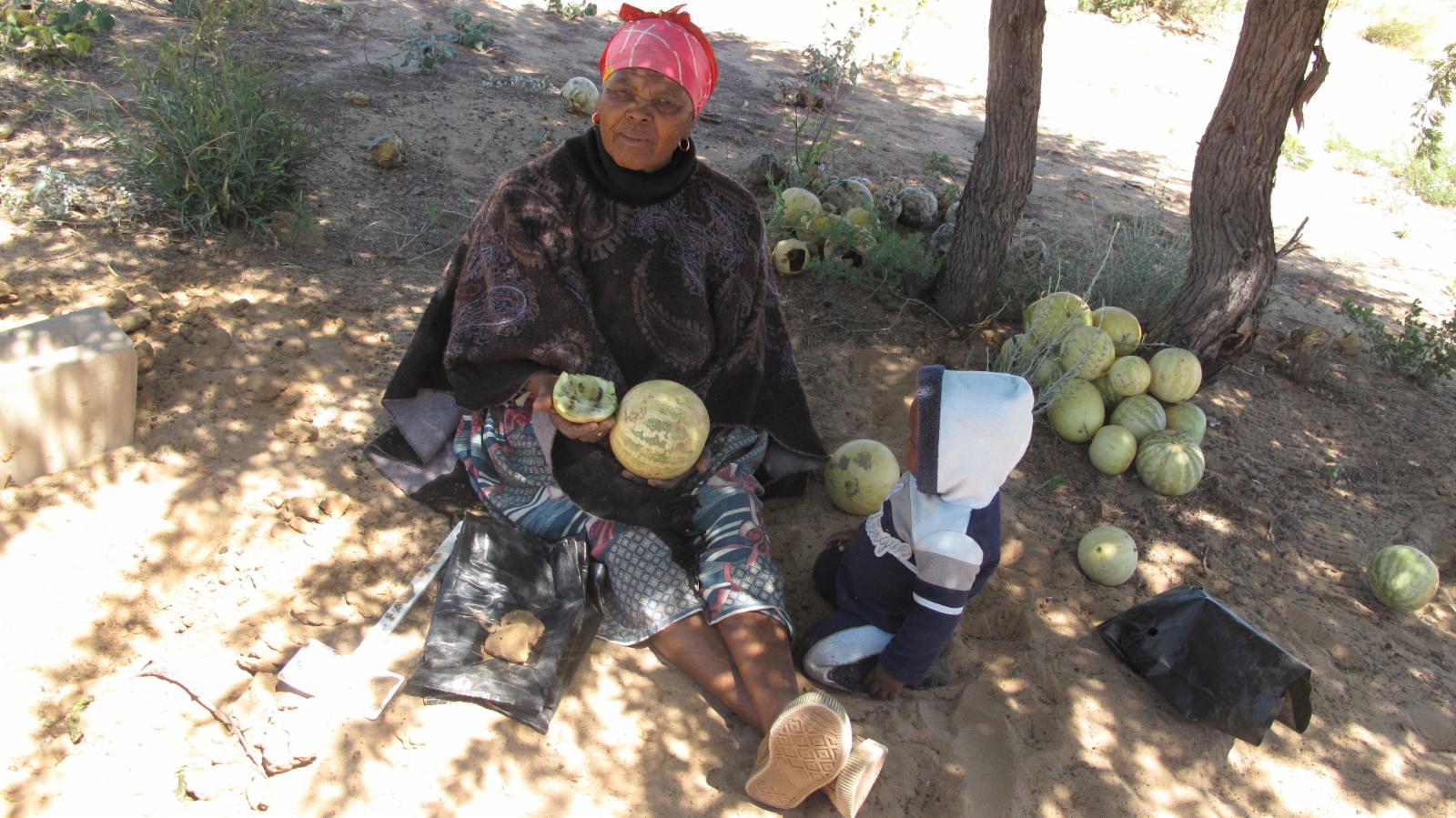 Watermelon is a member of the cucurbit family (Cucurbitaceae), which includes cucumbers (Cucumis sativus), melons (Cucumis melo, for example), loofahs (Luffa species), and pumpkins and squashes (Cucurbita species). The generic name Citrullus is the diminutive of Citrus, perhaps referring to the spherical fruit. The specific epithet lanatus (meaning woolly) refers to dense woolly hairs on young parts of the plants, particularly stems.

Citrullus lanatus is widely cultivated for its edible fruits, which are also an important source of water in arid regions of Africa. It is thought that watermelon was first domesticated in central and southern Africa. Watermelon seeds and leaves have been found in ancient Egyptian tombs, suggesting it was cultivated there more than 5,000 years ago. Having been cultivated for so long, its origins are unknown, but it is thought that it may have been selected from Citrullus colocynthis (known as 'bitter colocynth'; a bitter, poisonous perennial) in early African agriculture.

Wild, unselected forms tend to bear bitter fruit, due to the presence of cucurbitacin (a biochemical compound used for defence against herbivores) and hence are normally only fed to cattle.

Citrullus lanatus is thought to be native to Africa. It is found in grassland and bushland, mostly on sandy soils, and often along watercourses or near water, up to 1,785 m above sea level. It flourishes in dry climates and requires only limited rainfall.

Some propose the Kalahari region (Botswana, Namibia and South Africa) as the area of origin, whereas others suggest it is native to northeastern Africa. Citrullus colocynthis , thought by some to be the wild parent, is found in dry areas of North Africa and Asia (eastwards to Afghanistan and Pakistan).

Another closely related Namibian species, C. ecirrhosus , is thought more likely to be the progenitor based on studies of plastid DNA. In the wild in Africa, both sweet and bitter forms exist, and they quickly escape from sites of cultivation everywhere into neglected or abandoned farmlands, where they continue to be harvested.

Watermelon is cultivated in all tropical and subtropical countries, as well as in temperate countries with a continental climate. It is widely naturalised.

Overview: An annual climbing or trailing herb, with hairy stem up to 10 m long. Tendrils divided at the tip into two or three parts. Separate male and female flowers are borne on the same plant.

Flowers: Solitary, borne in leaf axils. Both male and female flowers are yellow, up to 3 cm in diameter, and borne on pedicels (flower stalks) up to 45 mm long. Flowers are usually pollinated by honey bees.

Fruits: Fruits of wild plants up to about 20 cm in diameter, greenish mottled with darker green. Fruits of cultivated plants up to about 70 × 30 cm, rounded, oval or oblong, with a golden-yellow to dark green skin, the skin being uniform, mottled or striped. Flesh usually red or yellow, sometimes orange, pink or white.

Watermelons are cultivated commercially for their refreshing, sweet fruits. Dry conditions are considered to produce the sweetest fruit (high humidity is thought to suppress formation of sugars).

They are mostly consumed as fresh fruit, alone or as part of fruit salads or other desserts. In some African cuisines the fruit and leaves are cooked as a vegetable.

Small, white-fleshed cultivars are used in the production of preserves. Watermelon fruits are made into syrup in Eastern Europe. The rind may be consumed in pickled or candied form. In parts of the former Soviet Union, and elsewhere, watermelon juice is fermented to produce an alcoholic beverage.

Watermelons are collected from the wild for local use, notably as a source of water in the Kalahari region of southern Africa. The flesh comprises about 65% of the whole fruit and contains over 90% water. Watermelon contains carotenes and vitamin C.

Watermelon seeds are used in some traditional African cuisines. They are eaten dry or roasted as a snack food or as an ingredient in soups, in the Middle East, China and other Asian countries. Watermelon seeds are rich in edible oils and protein. They are ground into flour and baked as bread in some parts of India.

Watermelon seeds are sold in West African markets as egusi (a name also used for Cucumeropsis mannii , another member of the cucurbit family). They are chiefly used as a masticatory, but also for medicine, food and oil. They are roasted and ground to a pulp, which is added to soup or made into sauce or porridge. Seed oil is extracted for use in cooking.

Seeds can be roasted and used as a coffee-substitute.

Bitter forms of watermelon and the cake left over after expressing the seed oil are used as cattle-feed. The leaves and fruit provide grazing for stock.

Watermelon has been used as an ingredient in sun-lotions and other cosmetics.

Although watermelon is native to Africa and did not reach the Americas until the 16th century, it rapidly gained favour and assumed an important role in American popular culture.

The true southern watermelon is a boon apart and not to be mentioned with commoner things. It is chief of this world's luxuries, king by the grace of God over all the fruits of the earth. When one has tasted it, he knows what the angels eat.

The true southern watermelon is a boon apart and not to be mentioned with commoner things. It is chief of this world's luxuries, king by the grace of God over all the fruits of the earth. When one has tasted it, he knows what the angels eat .

Watermelons feature prominently in art, literature, advertising and merchandising, and summer watermelon festivals are held throughout the USA.

TheMillennium Seed Bank Partnership aims to save plant life worldwide, focusing on plants under threat and those of most use in the future. Seeds are dried, packaged and stored at a sub-zero temperature in our seed bank vault.

Thirteen collections of Citrullus lanatus seeds are held in Kew's Millennium Seed Bank based at Wakehurst in West Sussex.

Specimens of watermelon fruits, seeds and oil are held in Kew's Economic Botany Collection in the Sir Joseph Banks Building, where they are available to researchers by appointment.

Kew's Useful Plants Project in Botswana aims to help conserve plant species that are most beneficial to the wellbeing of local people.

One particularly useful species is watermelon, Citrullus lanatus . An important source of water in the Kalahari region over the dry season, it also provides food and medicines.

Working with inhabitants of Tsetseng and Lerala, the project team has agreed which plants are to be propagated in the community gardens. In both communities, facilities have been put in place for training growers and for propagating the useful species. In addition, a school programme has been developed to involve local children in the project.

Some people experience an allergic reaction on ingestion of watermelon, including swelling of the mouth and throat.

Use
Food and drink.

Use
Widely cultivated for its edible fruits 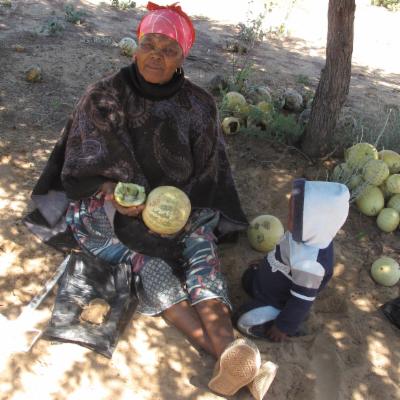 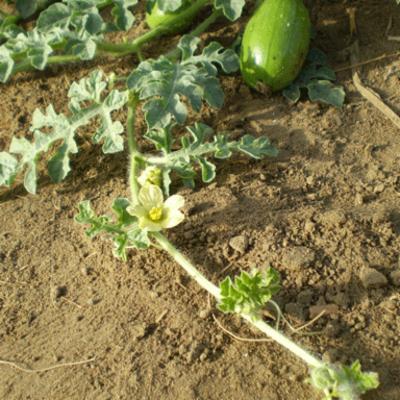 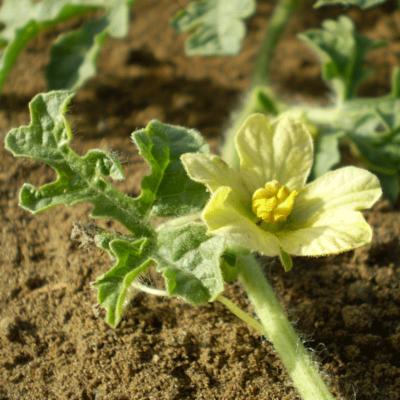 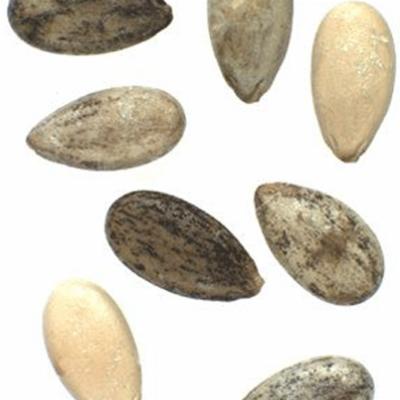 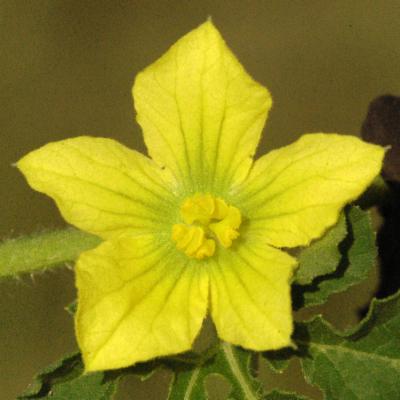 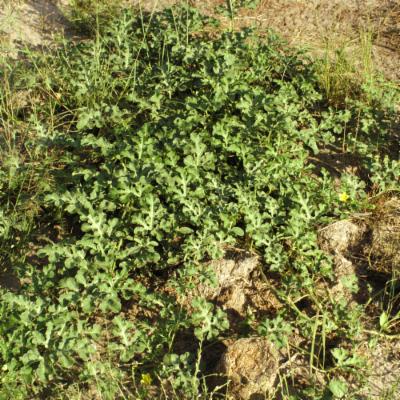 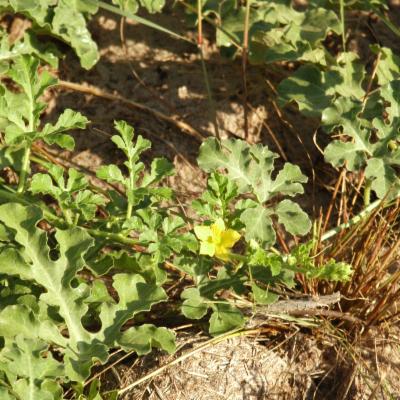 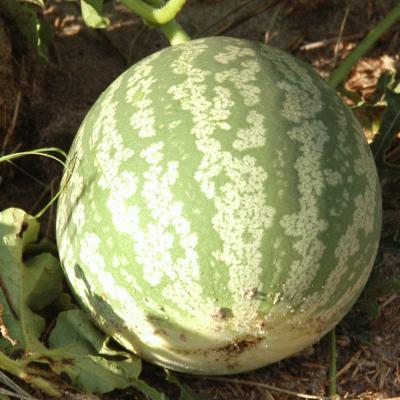 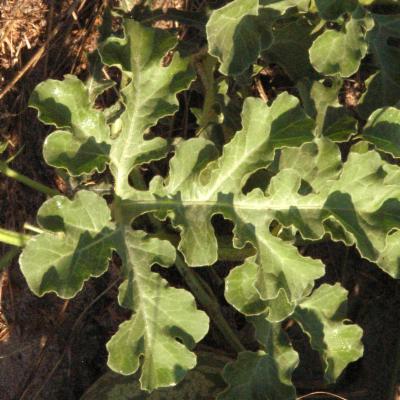 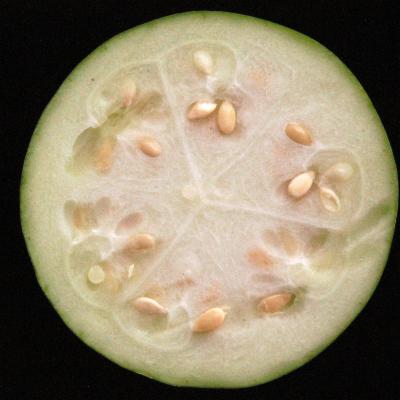 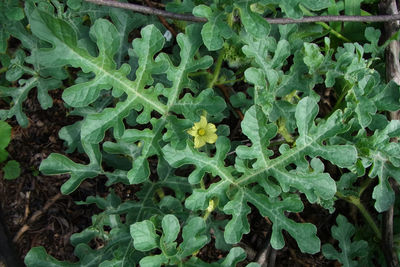 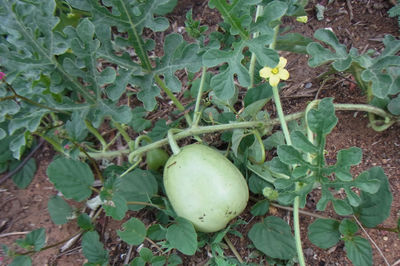 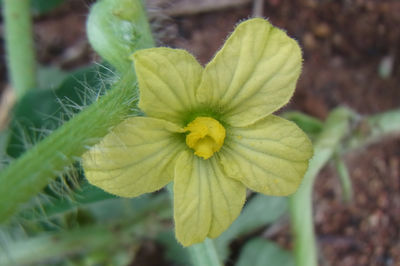 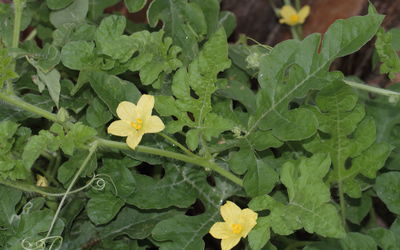 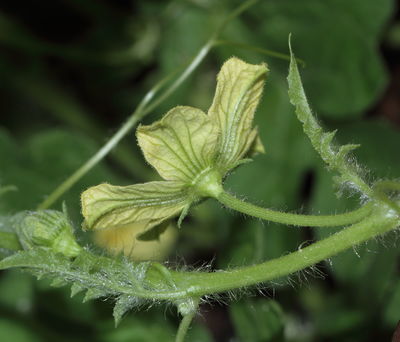 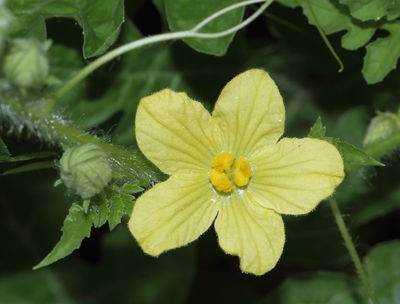 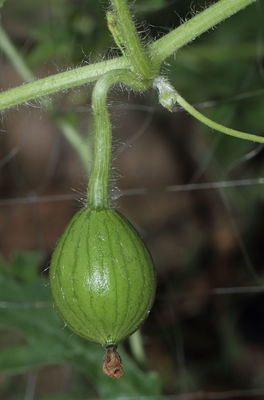 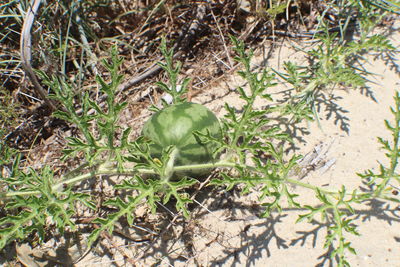 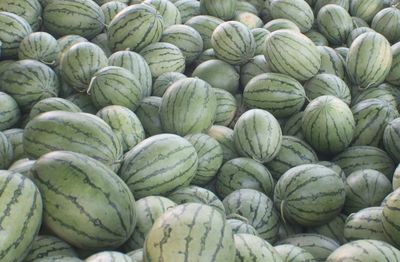 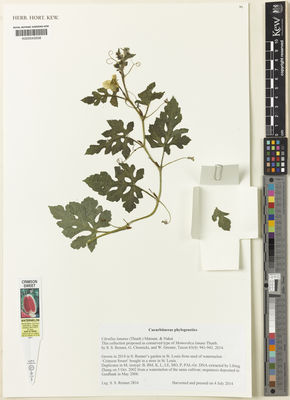 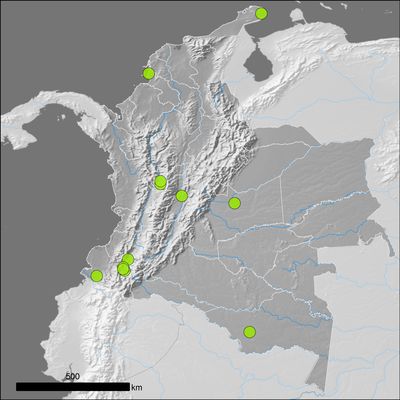 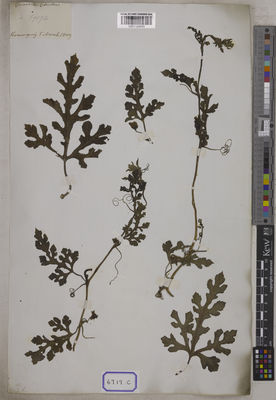