Famous for its spectacular reddish brown autumn leaves, red oak is a rapidly growing tree native to North America. It produces excellent timber and is also cultivated as an ornamental. Although usually known by the common name red oak, it is sometimes referred to as the northern red oak, which distinguishes it from the southern red oak (Quercus falcata). There are more than 600 species of oak (Quercus species). 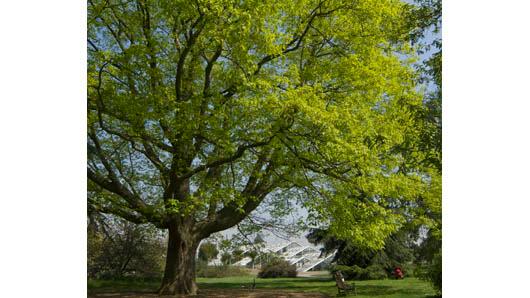 Famous for its spectacular reddish brown autumn leaves, red oak is a rapidly growing tree native to North America. It produces excellent timber and is also cultivated as an ornamental. Although usually known by the common name red oak, it is sometimes referred to as the northern red oak, which distinguishes it from the southern red oak (Quercus falcata). There are more than 600 species of oak (Quercus species).

Quercus rubra is native to south-eastern Canada and north-central and eastern USA.

A deciduous tree with a rounded crown, Quercus rubra can grow up to 45 m tall. Its bark is smooth and slate-grey to greyish-brown on young trees, becoming dark brown to almost black on older trees. The leaves are deciduous (they are shed during autumn) and have 3-5 pairs of lobes. The edges of the leaves are irregularly toothed.The leaves are green when they unfold, but become reddish or yellow-brown in autumn. The flowers open in spring as the new leaves unfold. Male and female flowers are borne separately, males in clusters on slender, hanging catkins, and the tiny, inconspicuous females singly or in clusters.

The fruit is a single-seeded nut (acorn) with a cap (cupule) enclosing the lower quarter of the nut. The acorns are 2-3 cm long and take two years to ripen (being only small and partially formed in the first year). Trees do not normally flower until they are about 20 years old and do not usually produce abundant nuts until they are about 40 years old.

Oak wilt, caused by the fungus Ceratocystis fagacearum , has led to the death of many red oak trees in North America. The fungus is spread from tree to tree by beetles or through inter-connecting root systems. Control efforts focus on removing dead or diseased trees and preventing damage to healthy ones.

Red oak wood is hard and strong, and the rapidly growing Quercus rubra is one of the most important timber trees in its native North America. The light reddish-brown wood is used for flooring, veneers and furniture. Despite its strength, the wood has such an open grain that smoke can be blown right through a flat-sawn board from end to end, down the grain.

Quercus rubra has been widely planted in Europe as an ornamental, on account of its autumn leaves. It is commonly found in parks and large gardens but is less suited to cities as it cannot tolerate shade and needs ample space to grow. Its leaves can also be slippery when they fall onto pavements.

The majority of the oaks propagated at Kew are grown from seed. This method is preferred for the scientific collections as it is the easiest and safest means of collecting oaks in the wild without damaging their populations. Acorns are collected green and sown directly into the Arboretum Nursery field during the autumn. The seeds germinate the following spring. Oak seed does not store well and quickly becomes non-viable as it dries out. Mice and squirrels present a threat to the seeds, and netting or wire mesh is used to keep them at bay during autumn and winter. Rare oak specimens are sown in pots in a frost-free glasshouse for added protection.

Occasionally, young trees are also brought in from nurseries, for example to give instant impact in heritage plantings on the vistas. These are grown in a reputable nursery for 12 months where they can be inspected for pests and diseases before they are transplanted to Kew.

Young oaks often suffer from mildew on the young foliage. Such trees are not treated because once the oaks are planted out the mildew no longer presents a problem. It is often necessary to stake young trees. Tony Hall, who manages the oak collection at Kew, says that the Arboretum is treated as an extension of the nursery, in the sense that young trees there are carefully monitored during their early years.

Red oak can be seen growing near the southern entrance of the Princess of Wales Conservatory at Kew. Other specimens can be seen towards the western edge of the Gardens on the riverside walk, with a few key individuals at the northern end of the Gardens.

Pressed and dried specimens of Quercus rubra are held in Kew's Herbarium, where they are available to researchers by appointment. The details of one of these, including an image, is available online in the Herbarium Catalogue.

Specimens of the wood, bark and fruits of red oak, as well as a tool handle made from it, are held in Kew's Economic Botany Collection in the Sir Joseph Banks Building, where they are available to researchers by appointment. 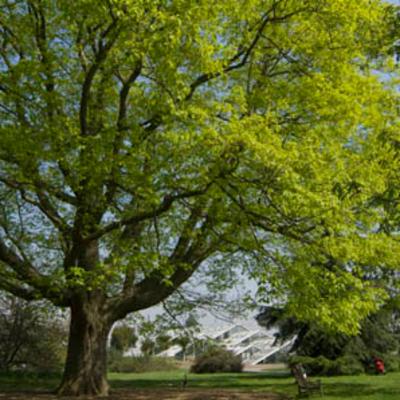 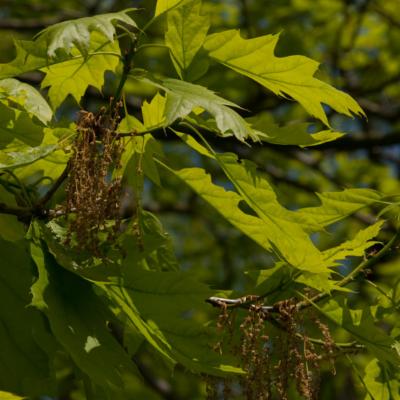 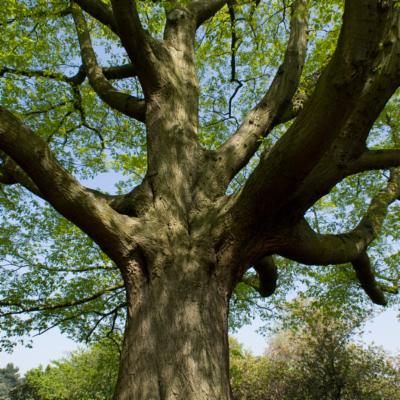 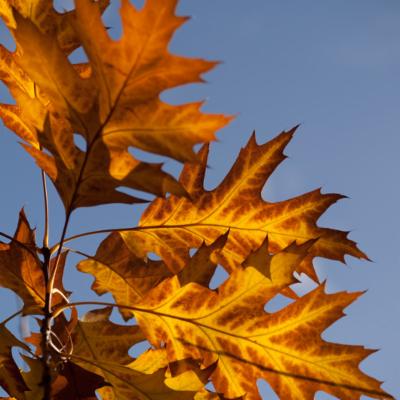 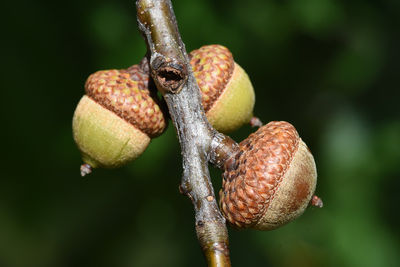 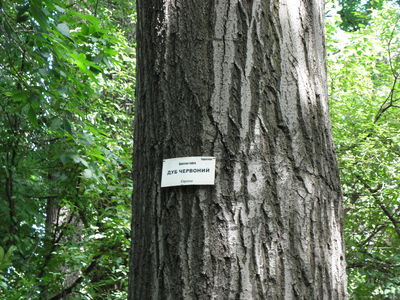 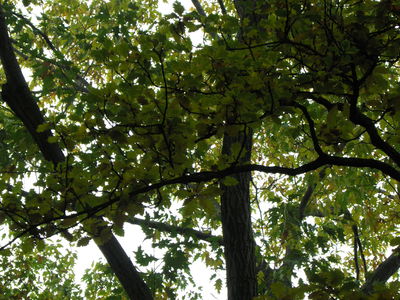 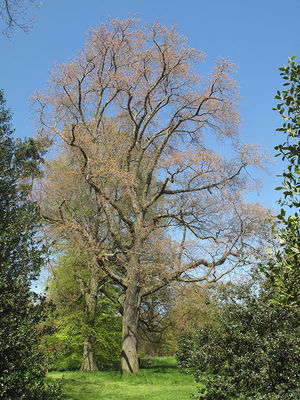 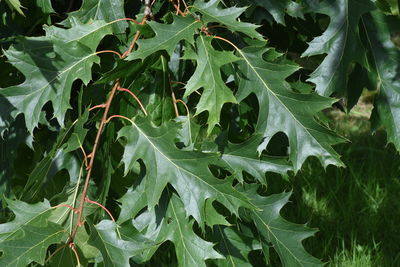 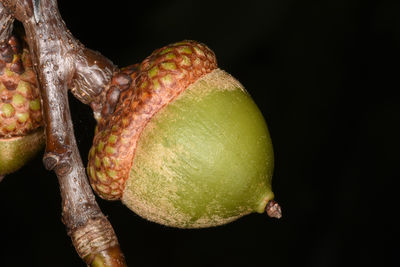 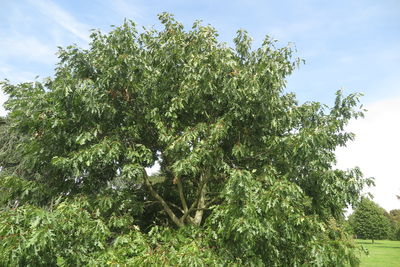 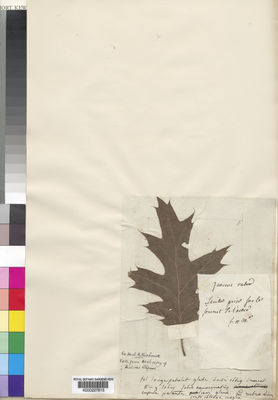 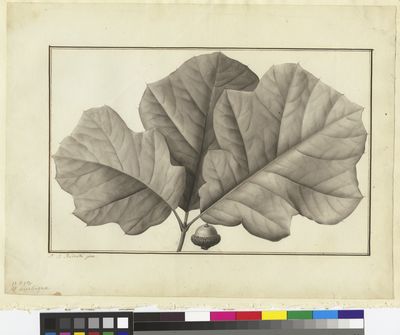 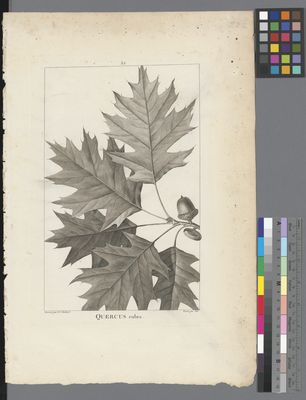 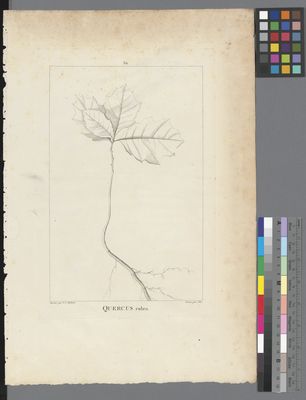 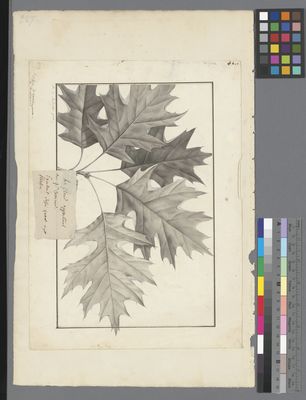 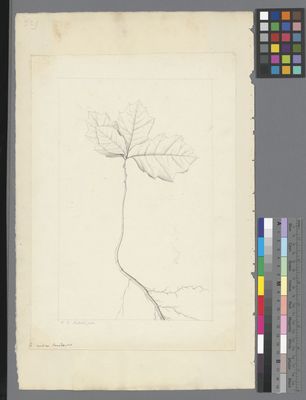