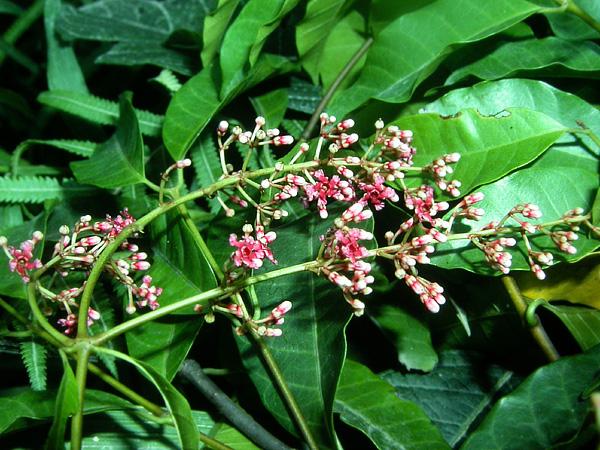 Morphology General Habit
Trees, shrubs, lianas, or sometimes herbs (not in our area, except introduced ones); latex nearly always present, usually white, sometimes clear, yellow or red
Morphology Leaves
Leaves simple, opposite, whorled, or less often alternate (as in Adenium), pinnately veined, entire, rarely stipulate
Morphology Reproductive morphology Flowers
Flowers bisexual, mostly actinomorphic, 5- or rarely 4-merous, fragrant
Morphology Reproductive morphology Flowers Calyx
Calyx often with colleters inside, free or united at the base, imbricate in bud
Morphology Reproductive morphology Flowers Corolla
Corolla tubular, contorted or occasionally valvate, free, overlapping to the right or left in bud, sometimes with a corona
Morphology Reproductive morphology Flowers Androecium
Stamens included or exserted, epipetalous, free or connate to the style; filaments often very short, epipetalous; anthers frequently triangular, of two cells longitudinally dehiscent, often partly sterile, sometimes with apical appendages
Morphology Reproductive morphology Flowers Gynoecium
Ovary superior or sometimes partly inferior, 1-celled and with 2 parietal placentas, 2-celled and with an axile placenta in each cell or composed of 2, or more, separate or at the base partly united carpels each with an adaxial placenta; ovules 2 to many; style one, often split at the base when carpels more or less separate; pistil head composed of a large variously shaped stigmatic basal part and a stigmoid apex; disk annular, cupular, composed of separate glands, or absent
Morphology Reproductive morphology Fruits
Fruit entire or consisting of two (rarely more) separate or partly united carpels, baccate, drupaceous, or follicular
Morphology Reproductive morphology Seeds
Seeds in dry fruits often winged or with a coma, mostly with an endosperm and a large embryo
Note
The corona presents many diagnostic characters for generic and specific recognition. Following the system devised by Liede & Kunze in Pl. Syst. Evol. 185: 275–284 (1993), it may be corolline (derived from the corolla) or gynostegial (from the staminal column). Corolline coronas can be divided into those occuring in the corolla lobe sinuses and those forming an annulus in the corolla tube. Gynostegial coronas again have two basic elements, a staminal corona attached dorsally to the stamens, and an interstaminal corona, and these elements can be combined in a number of ways: e.g. staminal corona lobes only; a fused ring of staminal and interstaminal lobes; fused staminal and interstaminal corona with additional staminal lobes. Notes on floral structures within the more derived subfamilies of Apocynaceae: the five stamens are fused apically to the expanded stylar head and together form a compound structure called the gynostegium. The ovary is therefore almost entirely concealed within a ring of stamens (the staminal column) whose filaments are usually fused into a tube, but free in subfamily Periplocoideae. Only the sterile apex of the stylar head remains visible, level with or extending beyond the anthers; the receptive parts of the stylar head are on its underside behind the frequently sclerified margins of the anthers which form a chamber for the deposition of pollen. The pollen transfer apparatus is formed by secretions from the stylar head and, in periplocoid genera, generally consists of a spatulate translator onto which pollen tetrads, or more rarely pollen masses (pollinia), from adjacent anthers are shed; in the two remaining subfamilies, the secretions form a central corpusculum linked by caudicles or translator arms to 2 or 4 pollinia of adjacent anthers – the unit is transferred in its entirity from one flower to another and is called a pollinarium.

Large shrubs (Calotropis, introduced in New World), lianas, vines, herbs or subshrubs, mostly perennial , often sending up annual shoots from a perennial rootstock, occasionally annual , and rarely strongly succulent (introduced in the Americas); latex usually white, but clear in non-native, succulent Ceropegieae. Leaves simple , entire , most commonly opposite but occasionally whorled , or reduced to a scale or spine (in introduced succulent genera).  Flowers actinomorphic , bisexual , 5- merous except for the paired carpels; corolla fused at least at the base, varying from rotate or shallowly campanulate to tubular or funnel-shaped, lobes twisted in bud and overlapping to the right, or valvate ; coronal structures often present either on corolla (infrequently) or more commonly on gynostegium (formed from fusion of stamens and stylar head ; stamens inserted at base of corolla , filaments fused into a tube, anthers with specialised marginal wings or guide rails; pollen aggregated into pollinia (one per locule , two per pollinarium), these bound by a waxy outer wall, pollinia attached to hard, brown or black, grooved corpusculum by translator arms, forming a pollinarium extracted from the flower as a unit; ovary superior , apocarpous with two carpels, these fused apically to form a stylar head with stigmatic surfaces on underside (secretions from the stylar head are formed into five discrete clip-like structures (corpuscula) which assist in pollen transport). Fruits paired dehiscent follicles (frequently single by abortion). Seeds generally flattened, ovate , mostly with a narrow marginal rim and a tuft of hairs at one end.

Goyder, D. J. (2004). An amplified concept of Philibertia Kunth (Apocynaceae: Asclepiadoideae), with a synopsis of the genus. Kew Bull. 59: 415 - 451. [Includes key to genera of Oxypetalum group, and key to species of Philibertia]

Goyder, D. J. (2006). An overview of Asclepiad biogeography. In: S. A. Ghazanfar & H. Beentje (eds), Taxonomy and Ecology of African Plants and their conservation and sustainable use (Proceedings of the XVIIth AETFAT congress). pp. 205 - 214.

Morphology General Habit
Climbing, twining or erect, softly woody or occasionally with wiry stems, or herbaceous perennials with a tuberous rootstock; leaves opposite, entire, linear to very broad, pinnately nerved; stipules absent, but sometimes with a stipular frill around the stem at the nodes which may become woody; inflorescence a terminal cyme often lateral by sympodial growth of the axis, sometimes racemiform or umbelliform; bracts very small; flowers bisexual, sometimes functionally unisexual and then dioecious; calyx-tube very short or obsolescent, segments 5, valvate or imbricate but opening very early; corolla gamopetalous, 5-lobed, tube short or sometimes as long as or longer than the lobes, lobes contorted or very rarely valvate; corona of 5 lobes arising from the base of the stamen filaments, of varied form, or rarely absent or reduced to tubercles; stamens 5, inserted in the corolla-tube or at its throat, free from each other, but with the anthers pressed together and to the expanded apex of the style; anthers basifixed, introrse, usually with a scarious apical appendage inflexed over the style; pollen granular, in tetrads discharged on to 5 spathulate pollen carriers derived from the expanded part of the style and with a glandular base; pollen carriers concealing the 5 stigmatic surfaces; carpels two, joined only by their styles, which unite to form a flat or variously elongated head; ovules numerous, multiseriate on a single adaxial placenta; fruit of two (or one by abortion or pollination failure) divergent or reflexed sessile follicles; follicles more or less fusiform and often greatly elongated, or sometimes broadly ovoid, smooth, glabrous or hairy, sometimes warted or winged, finally dehiscing lengthwise adaxially; seeds flat, often winged, and crowned with a coma of soft silky hairs; endosperm present; embryo straight, almost as long as the seed, cotyledons flat 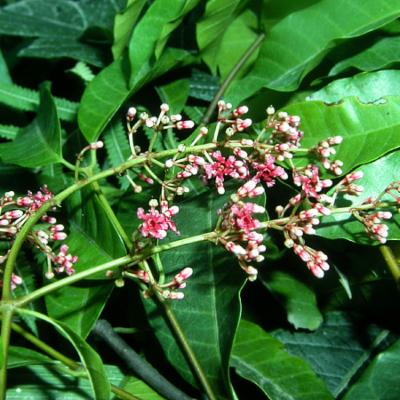 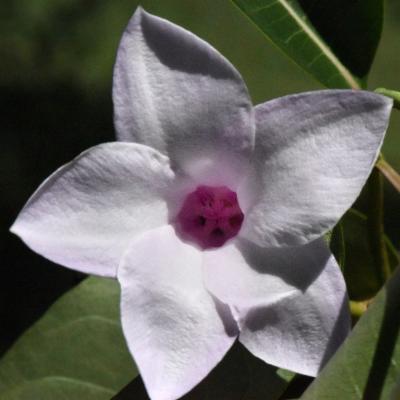 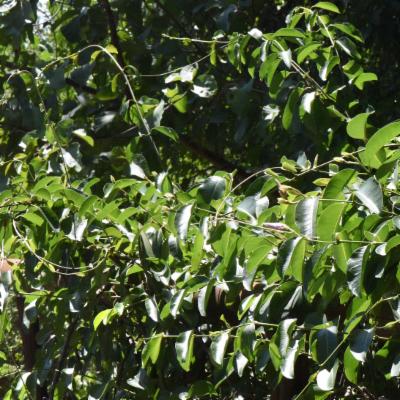 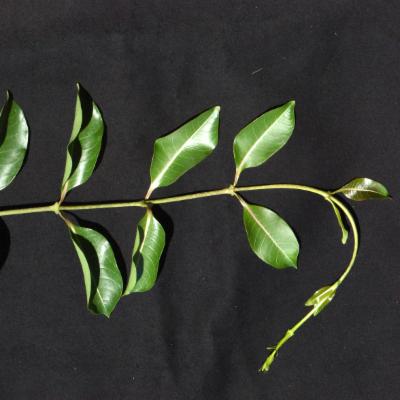 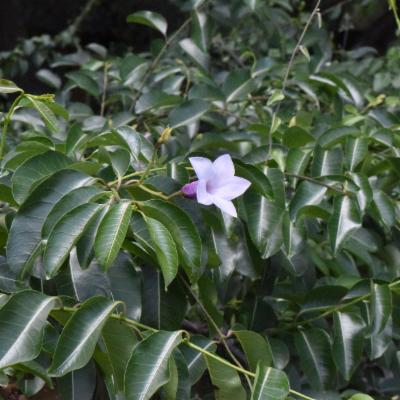 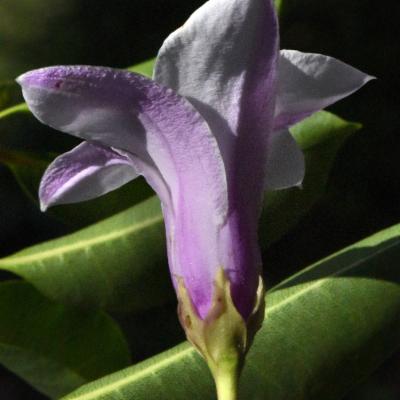 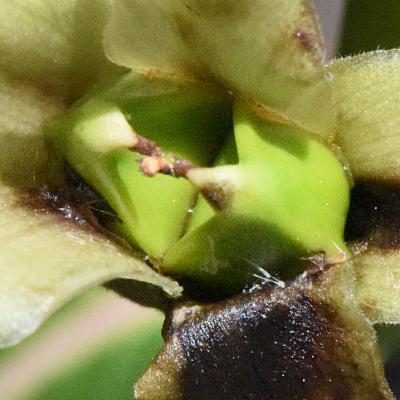 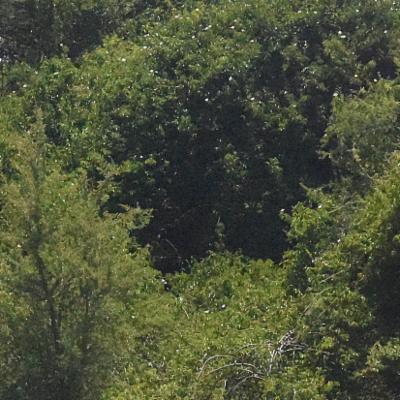 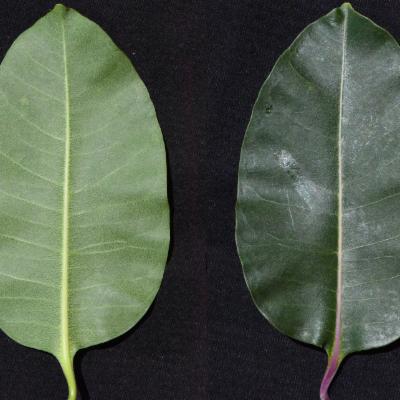 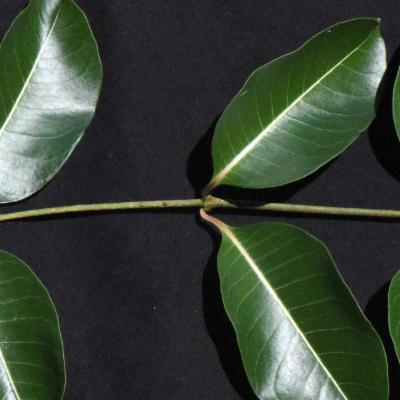