Sarracenia purpurea is a carnivorous plant that attracts insects and other small animals to the colours and sweet secretions of its pitchers. Its prey includes insects, beetles and spiders, as might be expected, but also slugs and more rarely frogs, lizards and newts. Insects entering the pitchers lose their footing on the smooth hairs and waxy covering of the rim and inner surface and fall to the bottom of the pitcher where they are digested by plant enzymes. This mechanism of capturing prey (termed a pitfall trap) is therefore different from that of the Venus flytrap (Dionaea muscipula), for example. 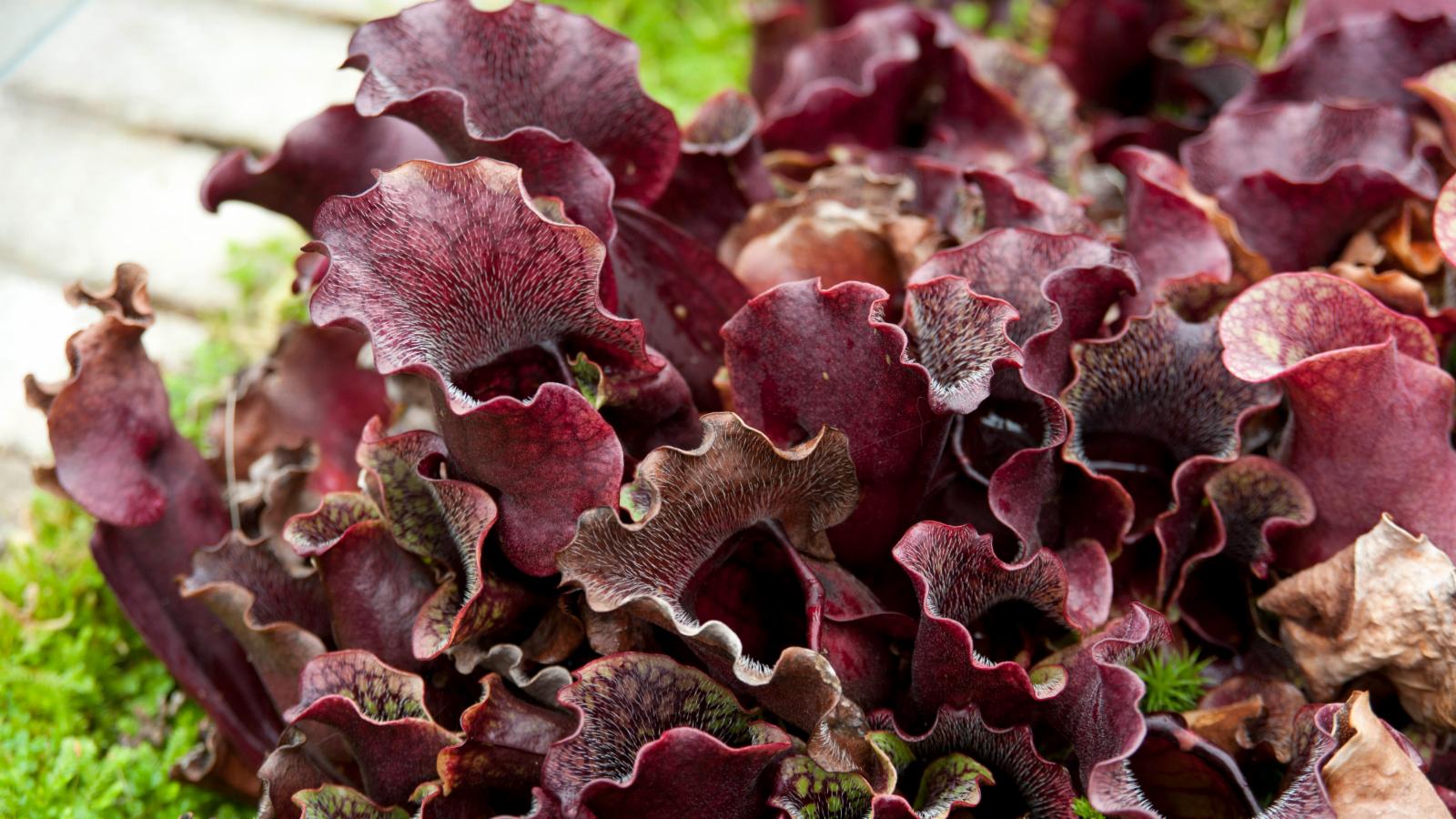 Sarracenia purpurea is a carnivorous plant that attracts insects and other small animals to the colours and sweet secretions of its pitchers. Its prey includes insects, beetles and spiders, as might be expected, but also slugs and more rarely frogs, lizards and newts. Insects entering the pitchers lose their footing on the smooth hairs and waxy covering of the rim and inner surface and fall to the bottom of the pitcher where they are digested by plant enzymes. This mechanism of capturing prey (termed a pitfall trap) is therefore different from that of the Venus flytrap (Dionaea muscipula), for example.

Despite the danger for most insects, there is a species of mosquito and a midge that actively seek out pitchers and use them as their breeding grounds. Larvae of the pitcher plant mosquito (Wyeomyia smithii) and midge (Metriocnemus knabi) commonly inhabit the aquatic environment in the pitchers of Sarracenia purpurea in the wild.

The genus Sarracenia was originally named by Linnaeus in 1753 after Michel Sarrazin de l'Etang (1659-1734), the French king's physician in New France (Canada), who sent plant specimens of S. purpurea to Europe.

Sarracenia purpurea subsp. purpurea is considered the hardiest of the pitcher plants, and for many years it has been naturalised in bogs in Ireland (following initial planting) and Switzerland. The most recent comprehensive survey of the British flora indicates that S. purpurea has increased its range in the last few decades and is now found in several boggy sites in England and Scotland.

Overview:  Sarracenia purpurea has a rhizome that produces a tuft of 4-10 hollow leaves, forming pitchers that trap insects and other small prey. The hood is curved around the mouth of the pitcher. Pitchers contain liquid in which the insects drown.

Leaves: Leaves are 10-30 cm long, green, yellow or reddish with purple veins, curved, swollen around the middle, with a flat wing along the inside margin. The inner surface of the apex of the pitcher is covered with downward-pointing hairs.

Flowers: The flowering stems are 30-80 cm tall and carry a single nodding, deep purple flower. This has five green sepals and 3-4 bracts. The five petals are obovate (egg-shaped), around 5 cm long and curl over the style, which is yellow, flattened and umbrella-like with five small, hooked stigmas. The flowers are scented (but sometimes not pleasantly so) and pollinated by bumblebees.

Seeds: The seeds are small and numerous.

Although Sarracenia purpurea is considered fairly common in suitable habitat throughout much of Canada and north-eastern USA, it is considered rare in much of south-eastern USA, where states have passed legislation to protect native populations due to declining numbers.

The species is widely traded for ornamental and medicinal purposes, and Sarracenia purpurea is therefore included on Appendix II of CITES (Convention on International Trade in Endangered Species), which mandates regulation of international trade in threatened species. Whereas much of the international trade is now conducted with artificially propagated plants, poaching and wild-harvesting of this species continue. In addition to potential collection pressures on wild plants, significant declines in wetland habitat threaten the native populations. In particular, conversion of natural pine savanna to pine plantations in south-eastern USA has destroyed many sites for this and other Sarracenia species. Changes in fire regimes and grazing patterns, nutrient enrichment and chemical pollutants deposited from the atmosphere also pose significant threats.

Native American Indians used Sarracenia purpurea for a variety of medicinal purposes, including as a diuretic and in childbirth, menstruation and treatment of fevers, chills, whooping cough and smallpox.

Sarracenia purpurea is grown as an ornamental. It is well suited for growing in cool greenhouse conditions or in sheltered places outdoors - in the bog garden or in damp woodland settings, for example. There are several hybrids and cultivars, including Sarracenia x chelsonii (a hybrid between S. purpurea and S. rubra ), which has slightly curved, narrow pitchers that are strongly veined dark red. This hybrid of garden origin has received an Award of Garden Merit from the Royal Horticultural Society.

The Millennium Seed Bank Partnership aims to save plant life worldwide, focusing on plants under threat and those of most use in the future. Seeds are dried, packaged and stored at a sub-zero temperature in the seed bank vault at Wakehurst.

Sarracenia purpurea is growing in the Princess of Wales Conservatory in the carnivorous plant zone.

Pressed and dried specimens of Sarracenia purpurea are held in Kew's Herbarium, where they are available to researchers from around the world by appointment. The details of some of these can be seen online in the Herbarium Catalogue.

Samples of the rhizome, roots, leaves and pitchers of Sarracenia purpurea are held in Kew's Economic Botany Collection, where they are available to researchers by appointment.

The botanical artist Marianne North depicted Sarracenia purpurea in her painting North American Carnivorous Plants , (see image, above), which can be seen in the Marianne North Gallery.

Pitcher plants ( Sarracenia sp.) were one of 12 star plants featured in the 2012 North American Landscape - the fifth in the series created by Kew for the British Museum's West Lawn.

North American plants have global ecological and economic importance and have been utilised by native peoples for thousands of years. Many were introduced to Europe following the colonisation of North America in the early 1600s. Grown for their medicinal uses, as food crops and for other economic purposes, some species have also become familiar ornamental garden plants.

The landscape was designed to evolve throughout the seasons - from a carpet of colourful daisies in the summer to spectacular orange and red maple leaves in the autumn. Other plantings included cypress, echinacea and carnivorous pitcher plants.

None known, but most insects and other small creatures are advised to stay well away from the pitfall traps! 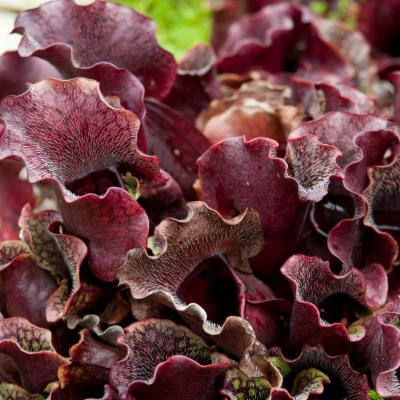 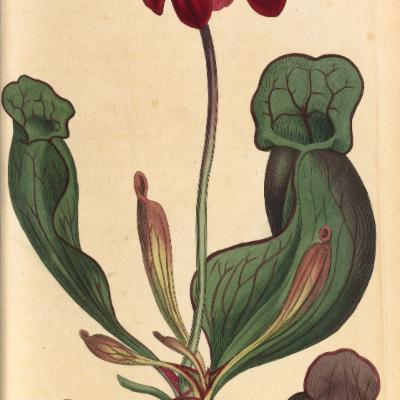 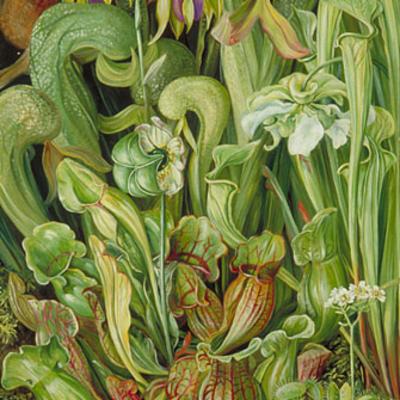 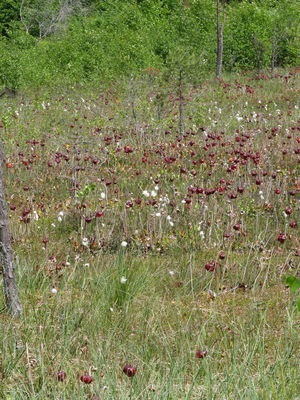 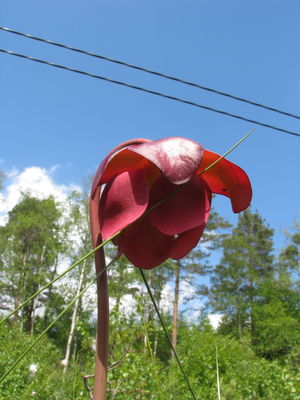 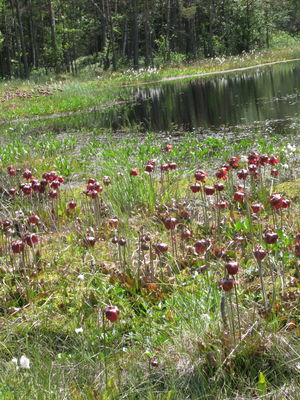 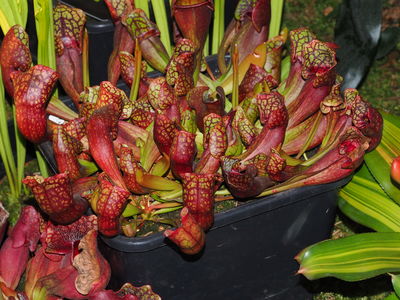 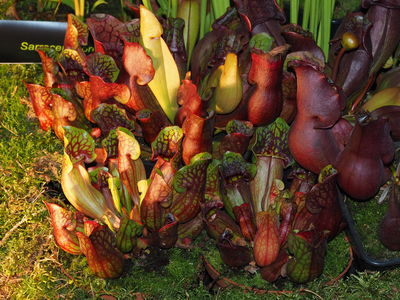