First published in Ann. Mus. Hist. Nat. 16: 298 (1810)
This species is accepted
The native range of this species is E. Central & SE. U.S.A. to Guatemala. It is a tree and grows primarily in the temperate biome. 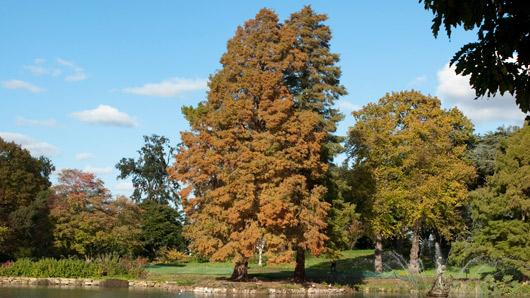 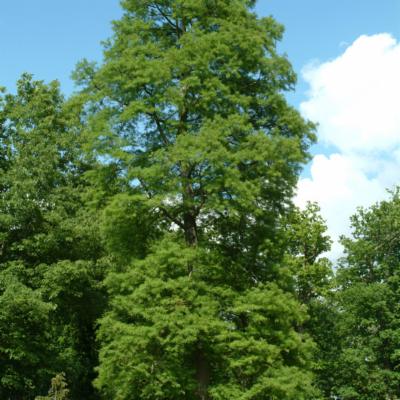 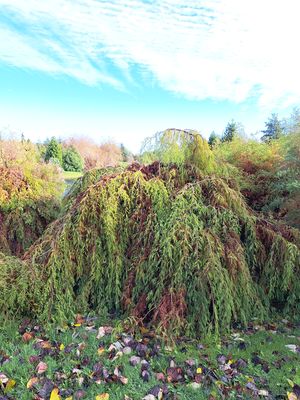 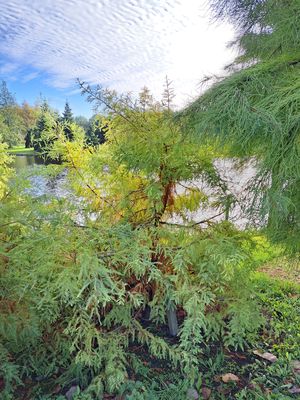 General Description
Bald cypress is an iconic tree that epitomizes the southeastern USA for residents and visitors alike.

Bald cypress is a dominant tree in lowland river flood plains and swamps where it can form extensive forests of nearly pure stands. These habitats flood frequently, and this species develops characteristic 'knees' (pneumatophores) extending upwards from its submerged roots. In the southern USA its branches are commonly hung with the 'air plant' Spanish moss (Tillandsia usneoides). The genus Taxodium was widespread in America and Europe before the Ice Ages but then became extinct in Europe.

Bald cypress is a deciduous tree up to 46 m tall with a single, erect trunk and lateral branches. The base of the trunk is often swollen, fluted or buttressed. Erect, 'breathing' roots (conical pneumatophores) are common and numerous on the root systems of trees growing in or near water. The trunk bears fissured bark which is light brown, turning grey and peeling off in long, more or less fibrous, strips.

The branches form a conical or pyramidal crown in young or cultivated trees. Older trees become increasingly flat-topped. The foliage shoots are 8−10 cm long, with leaves arranged in two ranks, and are shed in winter. The winter buds are spherical with 6−8 scales. The pollen cones are yellowish green turning purplish to brown and are borne singly or in pairs. The more or less spherical seed cones are often clustered and contain about 20−40 seeds per cone.

The soft, durable, straight-grained wood has many uses, in particular those for which decay-resistance is important, such as in the construction of houses, boats, flooring, barrels, river pilings and fences. This tree is also widely planted as an ornamental. In its native swamp forest ecosystem it provides food and nesting sites for rare birds and can help to regulate floods.

Bald cypress can be seen growing along the north side of Kew's Lake and Sackler Crossing and around the Palm House Pond.

Specimens of the wood, roots and cones of bald cypress are held in Kew's Economic Botany Collection in the Sir Joseph Banks Building, where they are available to researchers by appointment.

Bald cypress ( Taxodium distichum ) was one of 12 star plants featured in the 2012 North American Landscape - the fifth in the series created by Kew for the British Museum's West Lawn.

North American plants have global ecological and economic importance and have been utilised by native peoples for thousands of years. Many were introduced to Europe following the colonisation of North America in the early 1600s. Grown for their medicinal uses, as food crops and for other economic purposes, some species have also become familiar ornamental garden plants.

The landscape was designed to evolve throughout the seasons - from a carpet of colourful daisies in the summer to spectacular orange and red maple leaves in the autumn. Other plantings included cypress, echinacea and carnivorous pitcher plants.

Conservation
Taxodium distichum is rated as Least Concerned (LC) according to IUCN Red List criteria and has received a EDGE score of -6.69, which places it in position 695 on the EDGE Gymnosperm list. It has a Evolutionary Distinctiveness of 24.98, ranked 54. More information on the EDGE Gymnosperm project here https://www.edgeofexistence.org.