First published in Amoen. Acad. 3: 54 (1756)
This species is accepted
The native range of this species is Europe to Russian Far East. It is an annual and grows primarily in the temperate biome. 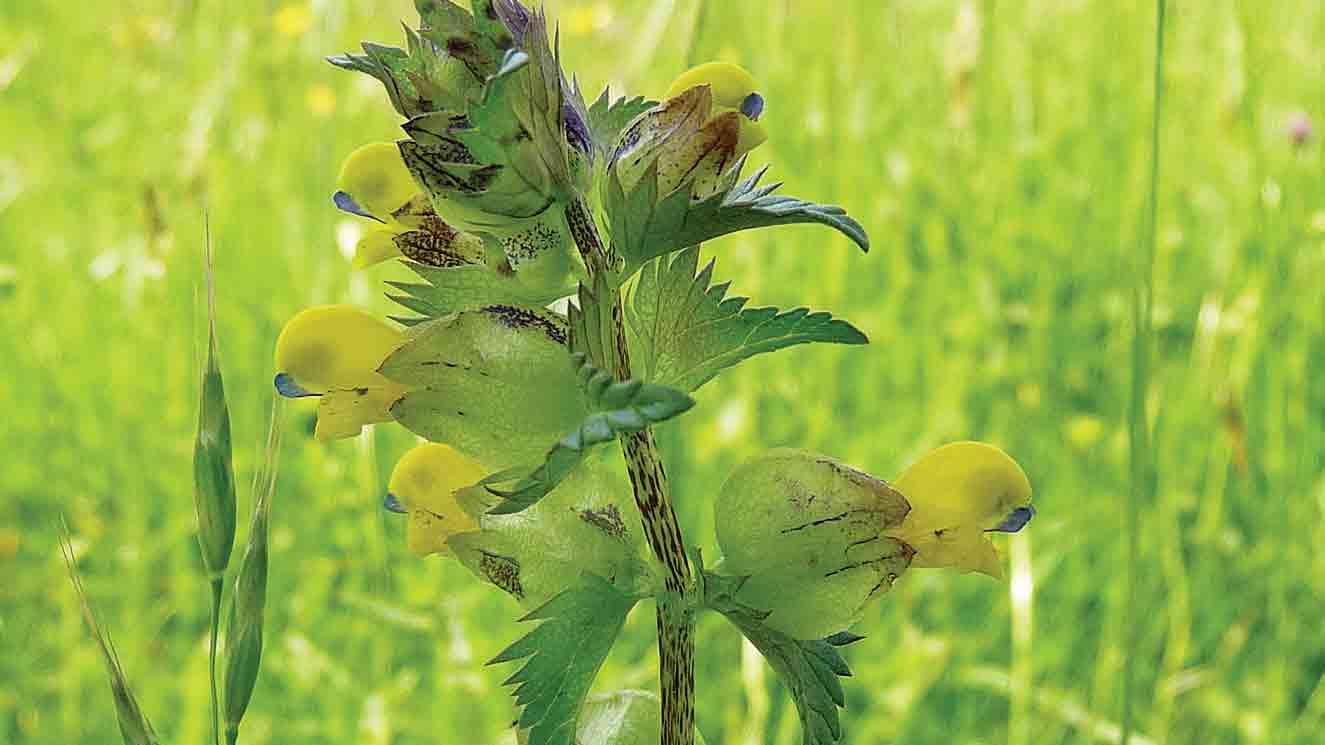 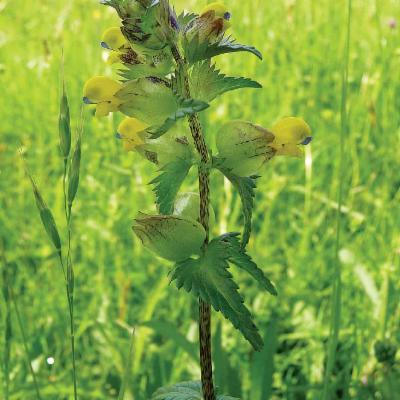 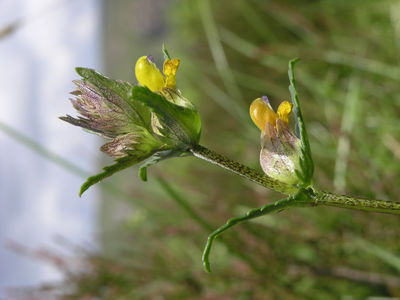 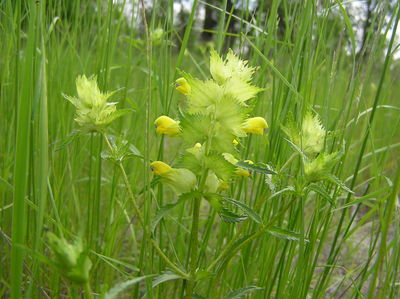 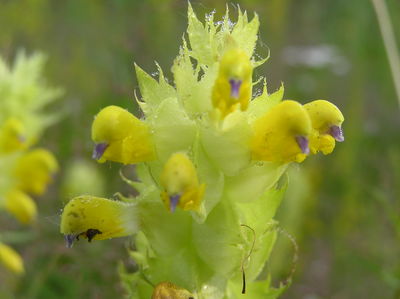 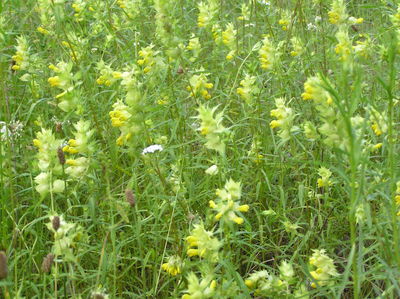 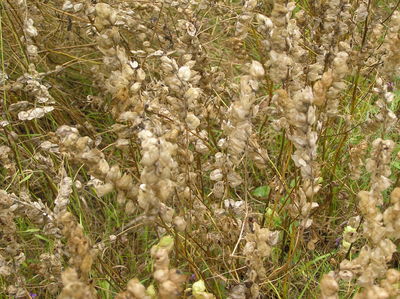 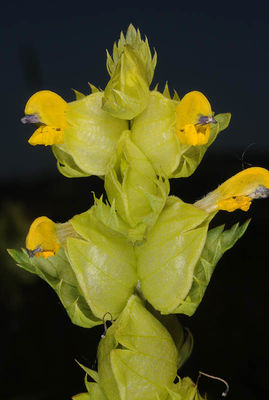 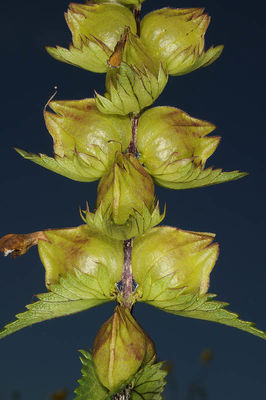 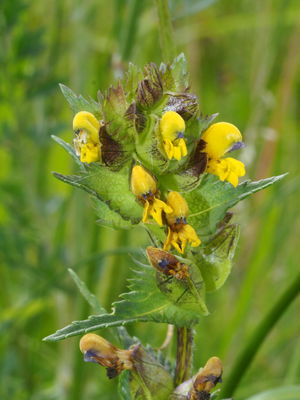 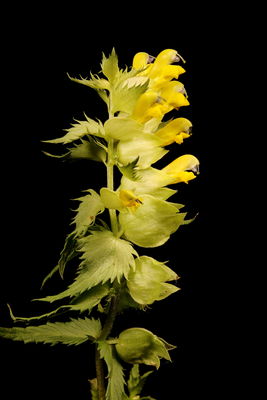 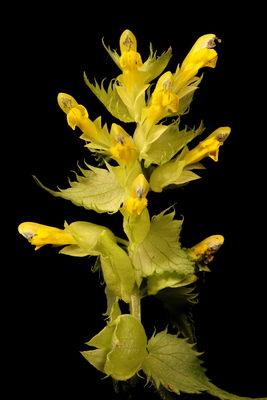 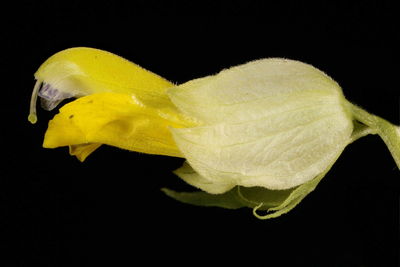 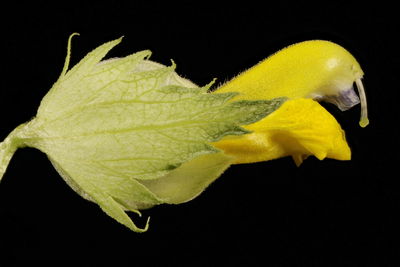 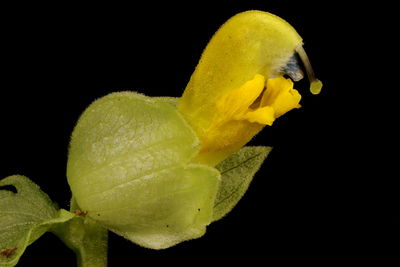 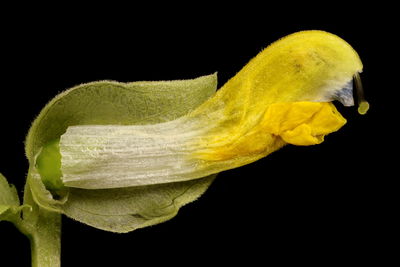 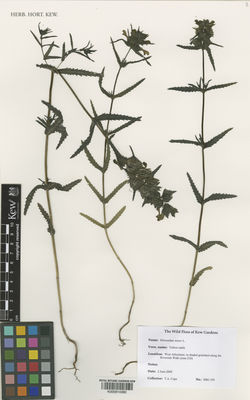 This pretty little annual sends out roots that grow into the roots of neighbouring grass plants, and steal nutrients from them. It will produce many tiny seeds that rattle around in the papery brown calyx - hence the common name - and it can spread itself year by year, weakening the poor, hard-working grasses that it grows among! But you can get rid of it easily: just cut the flowers before they can produce seed, and the yellow rattle will disappear from your meadow. But if you like variety in your field, keep the rattle; it will weaken the grass, giving other species more chance to survive.

An annual herb, 15-50 cm tall, with roots that penetrate the roots of other plants. The toothed leaves are borne opposite each other on the stem. The flowers are borne above the leaves, and are small and yellow, just peeping out of the inflated green calyx. The calyx turns brown in fruit, and holds the rounded capsule in which the seeds rattle about - hence the common name. Yellow rattle flowers in summer and is pollinated by bumblebees; if that fails, it can fertilize itself. Several varieties have been described, but are now all thought to be part of a single, variable species.

Rhinanthus minor is a widespread species, and is currently not under threat. Changes in farming practice will influence this plant; you will not find many in 'improved grassland', but in nutrient-poor, low-lying fields, yellow rattle can be very common.

The conservation of a parasite may not immediately strike people as important. However, recent studies on the impact of R. minor show that annual parasitic plants can play an important role in maintaining species diversity within habitats through differential growth suppression effects and enhanced soil nutrient recycling.

Yellow rattle is hemi-parasitic on grasses, that is, it can survive independently - but it grows best when drawing some nutrition from the grass roots its roots penetrate. Farmers used to dislike it, as it weakens grass, and it was seen as an indicator of rather poor grassland. But for this very reason it is now used when trying to turn grassland into wildflower meadows. This is done by sowing yellow rattle seeds in the grass. Because they steal food from their neighbours, yellow rattle seedlings can grow very quickly in the spring and also slow the growth of the neighbouring grass plants, so other plants have more chance to survive.

Number of seed collections stored in the Millennium Seed Bank: 12

Seed storage behaviour: Orthodox (the seeds of this plant survive drying without significant reduction in their viability, and are therefore amenable to long-term frozen storage such as at the MSB)

Yellow rattle seeds were sown alongside Kew'sMillennium Seed Bank atWakehurst in the summer of 2009, as part of work to restore wildflower meadows. The seeds need a long cold period to germinate, and the harsh winter provided the perfect conditions for the plant to flourish and there is now an abundance of the delicate yellow flower, along with other wildflowers such as ox-eye daisy.

Andy Jackson, head of Wakehurst, said: 'The plant is called the yellow rattle because the seeds are held very loosely in a papery cup, and when they mature - which we expect to be around mid-July - they actually rattle'. He added: 'The irises and the yellow rattle are just two of the huge variety of different flowers which will be providing a wealth of colour and natural beauty at Wakehurst this summer'.

Wildflowers, including yellow rattle, can be seen growing alongside Kew's Millennium Seed Bank at Wakehurst in the Loder Valley.

Rhinanthus spp. are reputedly poisonous to livestock and are usually avoided by grazing animals. The seeds contain iridoids which used to be found as toxic contaminants in bread cereals.

Use
Creation of wildflower meadows.