First published in Bijdr. Fl. Ned. Ind.: 294 (1825)
This genus is accepted
The native range of this genus is Tropical & Subtropical Asia to NE. Australia. It is an epiphyte. 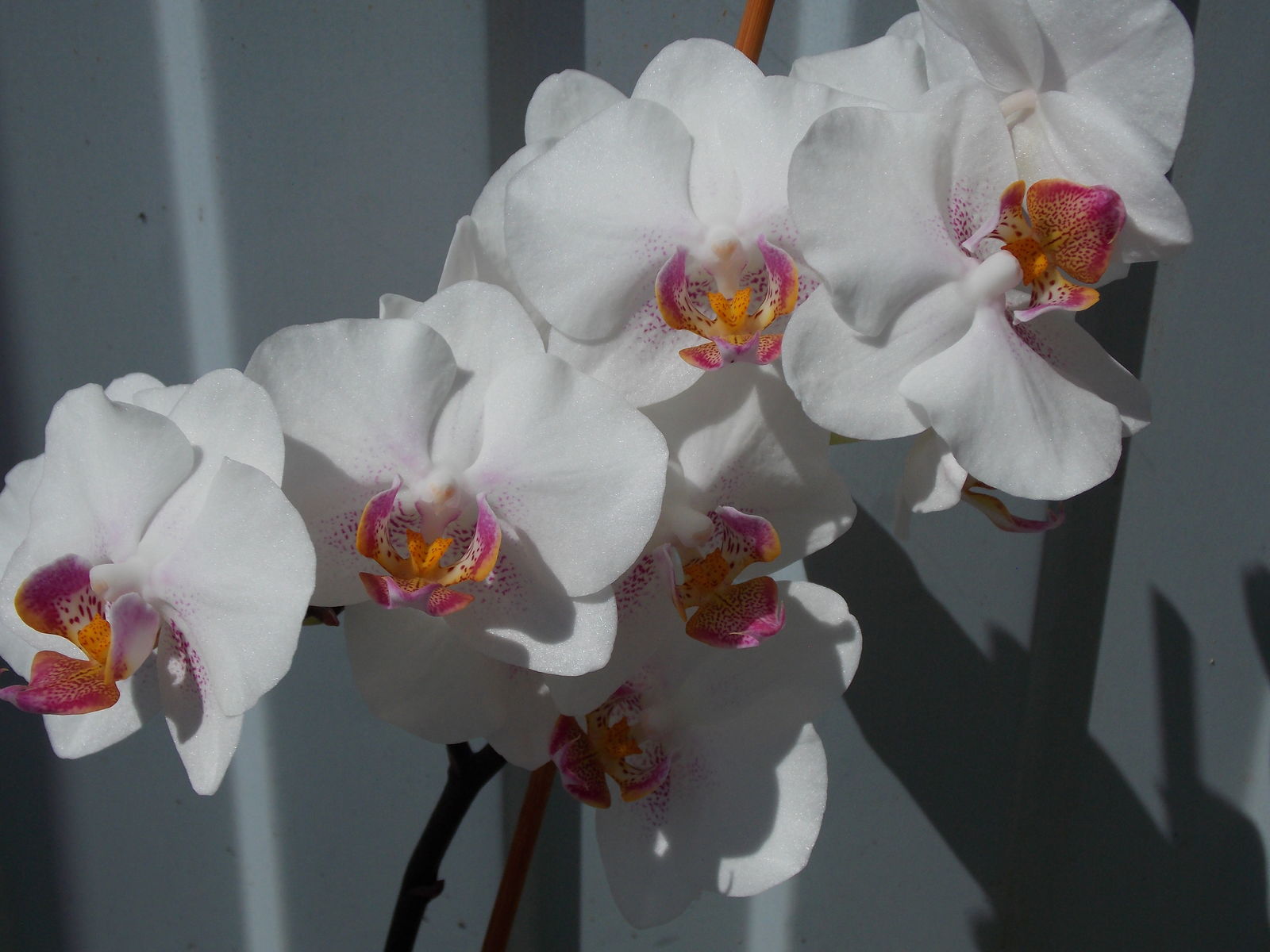 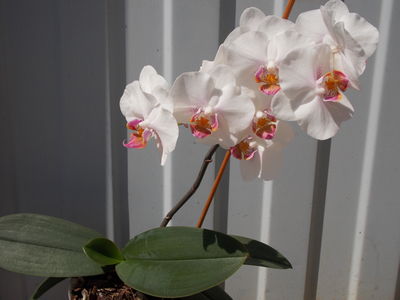 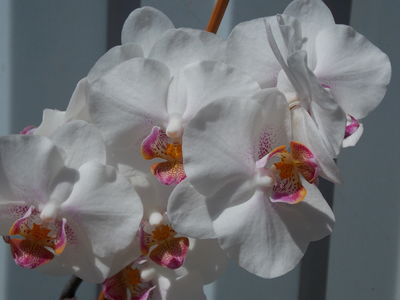 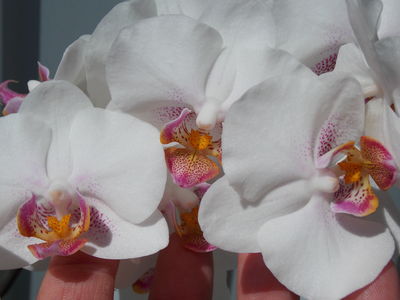 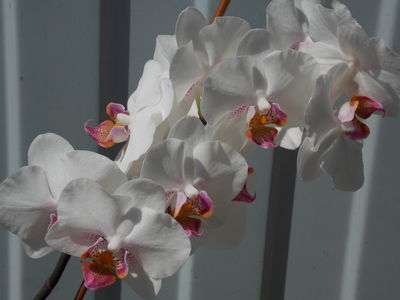 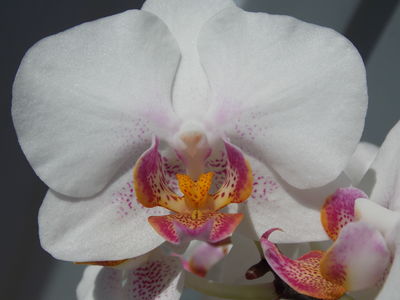 There are 45–50 species of Phalaenopsis collectively distributed from India (including Andaman and Nicobar Islands) to southern China, Korea, Japan, Thailand, Indochina, Malaysia, and Indonesia to the Philippines, Australia, and New Guinea. The majority of species occur in Indonesia and the Philippines.

Phalaenopsis species are mainly epiphytes at 0–2500 m and occur primarily in three distinct habitats: seasonally dry areas, seasonally cool areas, and constantly warm and humid areas. The plants show adaptations to each of these (Christenson 2001). Species confined to monsoonal areas with a pronounced wet-and-dry cycle have adapted to the stress of the dry season in several ways. These include increased succulence in species such as P. cornu-cervi, in which the roots and leaves are thicker than other species of similar size. There are even unsubstantiated reports that P. cornu-cervi may be semi-deciduous in part of its range. Christenson (2001), however, pointed out that this may not be a direct adaptation to seasonal dryness because the sister species P. pantherina Rchb.f. is recorded from high in the forest canopy, where it is exposed to bright, diffuse light unlike most other species in Borneo that occur toward the base of trees under low-light conditions. Increased succulence in P. cornu-cervi may simply be a response to degree of exposure independent of seasonal dryness. The most extreme form of adaptation in Phalaenopsis native to seasonally dry areas is a deciduous habit, which eliminates excessive transpiration. This is seen primarily in several mainly Himalayan groups of Phalaenopsis, including P. sections Aphyllae and Parishianae. Species adapted to seasonally cool to cold conditions also occur in regions that are seasonally dry. It is difficult to say which adaptation came first because many adaptations apply to both extremes equally. The only truly cool- or cold-growing species belong to P. section Aphyllae. Phalaenopsis taenialis has been recorded as high as 2500 m in China and the Himalayan region, an elevation more typical of cold-growing genera. All these cold-growing species of Phalaenopsis are either deciduous or semi-deciduous in habit, accompanied by a strong dormancy, which affords some protection from cold damage. The majority of species in the genus, belonging to P. subgenus Phalaenopsis occur in areas that are uniformly warm and humid throughout the year. Most species occur in evergreen forests without a significant dry season. Within these forests is a mosaic of habitats, and Phalaenopsis species occur in most of them (Christenson 2001). Some species, such as P. gigantea J.J.Sm. and P. pantherina, occur relatively high in the canopy where conditions are exposed. These have leathery leaves to prevent desiccation and will tolerate higher light levels than many. Other species, such as P. fuscata Rchb.f. and P. tetraspis Rchb.f., grow under extremely low light levels. Many others occur in riparian habitats, such as along streams and rivers, which provide constantly high humidity regardless of local fluctuations in rainfall. Phalaenopsis violacea H.Witte occurs in swamps where humidity levels are also high. Species such as P. lowii and P. sumatrana Korth. & Rchb.f. are able to grow either as epiphytes or opportunistically as lithophytes. Christenson (2001) suggested that ‘life on large boulders may provide the plants with a steadier moisture supply or may take advantage of the light gap often associated with rock outcroppings in otherwise continuous forest’. The three species of P. section Esmeralda (formerly placed in the genus Doritis) and some Australian populations of P. amabilis (L.) Blume subsp. rosenstromii (F.M.Bailey) Christenson are unusual in being obligate terrestrials or lithophytes. Christenson (2001) commented that ‘both appear to be derived conditions within the genus, and an epiphytic habit is accepted as the ancestral character for the genus as a whole. In the cases of P. buyssoniana Rchb.f., P. pulcherrima, and P. regnieriana Rchb.f., the terrestrial habit appears to be an adaptation, in part, to an extremely pronounced dry season. Direct access to the soil and accumulated leaf litter presumably provide supplemental water during the dry season. Life on the ground for these three species, which are native to more or less deciduous forests, also presumably provides some shade even when the forest canopy is leafless. These species also show perhaps the strongest tendency for the leaves to turn reddish purple under intense solar radiation or water stress, another defence under extreme conditions’.

Schill and Pfeiffer (1977) reported on the pollen of P. amabilis, P. lueddemanniana Rchb.f., and Doritis pulcherrima (= P. pulcherrima). Tetrads were convex with a laevigate surface and a rounded sexine (calymmate in P. pulcherrima) 1–2 μm thick.

Phalaenopsis is currently the most important and popular orchid genus in cultivation, with species of P. sections Phalaenopsis and Esmeralda being particularly valuable in breeding programmes for the houseplant and cut-flower trade. No uses have been reported apart from some former medicinal use of P. aphrodite Rchb.f. and P. schilleriana Rchb.f. in the Philippines (Lawler 1984).