First published in Sp. Pl.: 996 (1753)
This species is accepted
The native range of this species is Europe to Iran. It is a tree and grows primarily in the temperate biome. 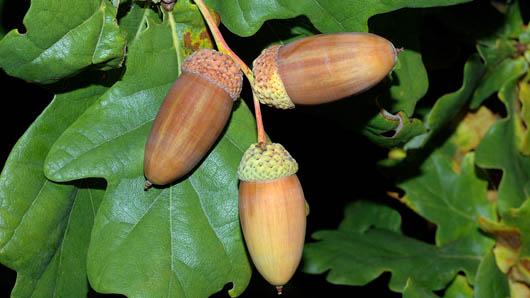 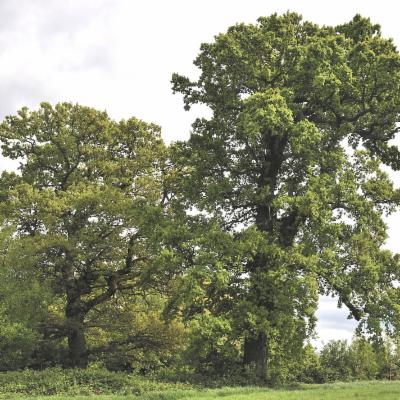 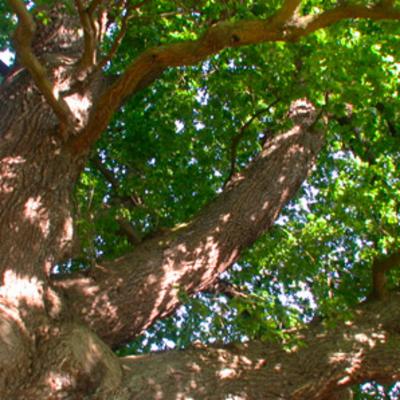 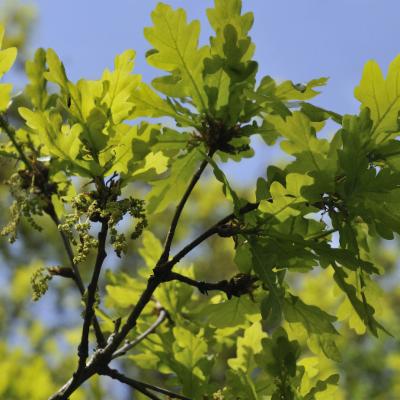 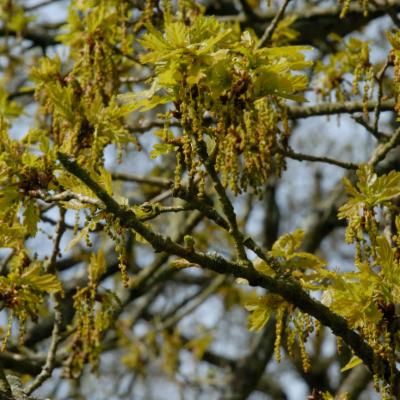 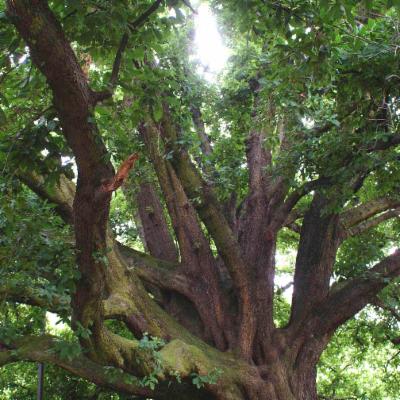 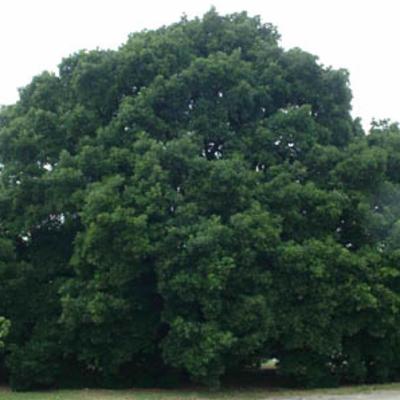 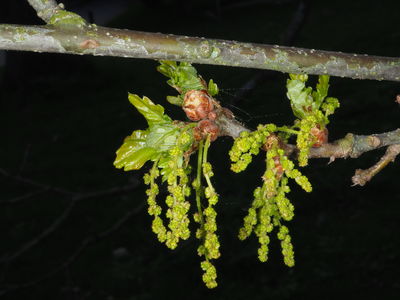 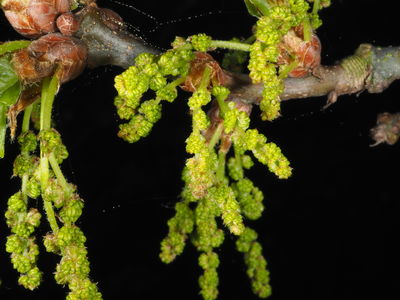 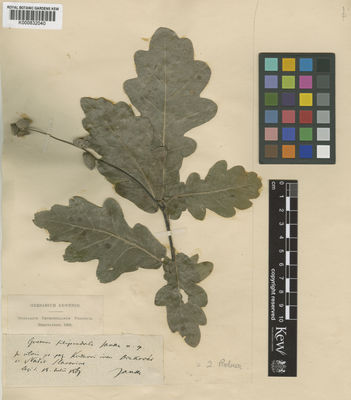 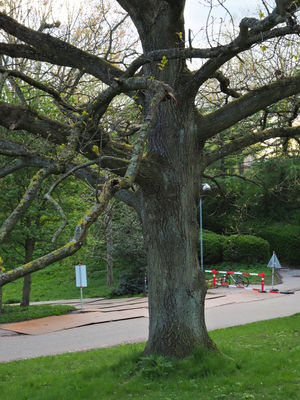 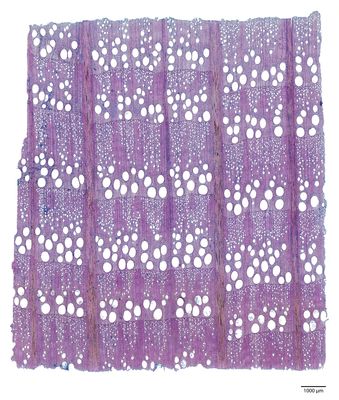 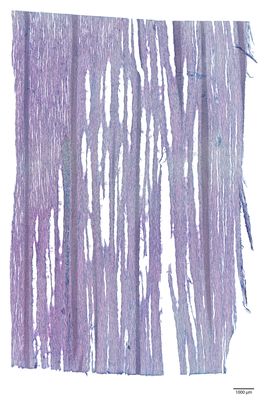 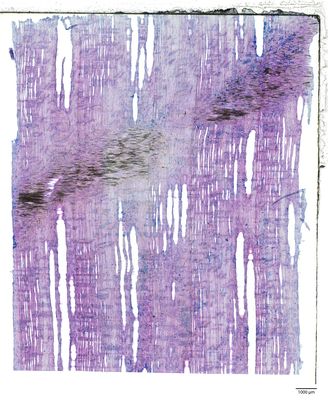 General Description
Unrivalled king of the forest in Britain, English oak (pedunculate oak) is synonymous with strength, size and longevity.

English oak is probably the most well-known and best-loved of the tree species native to Britain. This king of the forest can live for more than a millennium according to some sources, and grow up to 40 m high. Mature specimens are usually home to many species of wildlife. Since the Druids, and probably long before, the oak has played an important role in British culture. Couples were still wed under ancient oaks as late as Oliver Cromwell's time and the Yule log, kept from one year to another to warm the Christmas celebrations, was traditionally cut from oak.

Quercus robur is native to Asia Minor (an area corresponding to the western two-thirds of Turkey), North Africa, the Caucasus (a geopolitical region at the border of Europe and Asia) and Europe.

One of English oak's most recognisable characteristics is the shape of its leaves. Pale green in colour, they have four or five lobes on each side and are attached to the branches with almost no stalk. In contrast, the acorns are borne on long stalks known as peduncles, hence the name 'pedunculate oak'.

Large, old oaks often have dead branches at the top. This 'stag head' is not necessarily a sign that the tree is dying. When water is short the oak simply stops supplying its upper extremities, and as a result extends its lifespan.

For such a huge, long-lived and widespread tree, the oak is surprisingly bad at reproducing naturally. First, it can be a full 50 years before the first crop of acorns (seeds) is produced. Second, most of the tens of thousands of acorns dropped are eaten by animals, or simply rot. It is therefore left to the buried acorns of forgetful or dying squirrels or jays to ensure the continued lifecycle of this giant of the countryside.

Oakwoods have diminished greatly in the UK over the last few hundred years, but the Forestry Commission is now actively promoting woodland planting with native tree species, such as the English oak. A fungal disease known as 'sudden oak death' has recently arrived in the UK, apparently from Europe and although the disease affects many other species including Rhododendron , Viburnum , beech, sweet chestnut and holm oak, at present native oaks appear to be relatively resistant to it. However, it may pose a threat to oaks in the future - particularly if the trees become stressed by climate change. Another, more worrying 'disease' known as 'acute oak decline' has recently been identified in the UK. This does kill our native oaks and its causes have yet to be understood.

Quercus robur supports a wealth of organisms which benefit from the food, support and shelter it supplies. Its acorns are rich in starch and provide food for birds such as the Eurasian jay ( Garrulus glandarius ) and small mammals such as squirrels. An abundance of insects live on the leaves, buds and bark, and even inside the acorns. In autumn the soft leaves break down easily to form a rich leaf mould beneath the tree, which supports a wealth of invertebrates and fungi (such as the edible beefsteak fungus Fistulina hepatica ). The trunk and branches offer physical support to mosses, ferns and lichens, and the open leaf canopy lets light through to the woodland floor, meaning flowers such as violets, bluebells and primroses can thrive.

The green oak moth ( Tortrix viridana ) feeds on oak leaves in its larval (caterpillar) form and then rolls itself up in a leaf to pupate into the adult. This in turn is parasitised by at least four species of ichneumon wasps, which lay their eggs inside the defenceless pupae. Gall wasps lay their eggs inside the oak leaves, where their larvae then secrete a chemical causing the leaf to mutate and form a gall (oak apple), providing them with protection and shelter - though not enough to prevent them from being parasitised by other species of ichneumon wasp! In years when populations of caterpillar or moth larvae are high almost all the leaves on a tree can be eaten, yet the English oak is able to survive this trauma.

Birds such as great-spotted woodpeckers ( Dendrocopos major ) come to feed on insects in the bark. Acorns that have fallen to the ground provide food for rooks, wood pigeons and mice, which in turn attract birds of prey such as owls, buzzards and sparrowhawks.

Fungi, such as the orange oak bolete ( Leccinum quercinum ), form symbiotic associations with English oak roots, the fungi helping the tree to extract nutrients from the soil whilst in turn benefiting from sugars provided by the oak. Even after its death the English oak continues to support biodiversity. The decaying wood can host a vast array of fungi and the hollow trunks provide roosting sites for owls and hibernation sites for bats.

Quercus robur was named for its robust or sturdy nature ( robur means strength in Latin), and since iron tools were first made, people have been felling this mighty tree for its strong and durable timber. It can take as long as 150 years before an oak is ready for use in construction, but it is well worth the wait. Until the middle of the 19th century, when iron became the material of choice for building ships, thousands upon thousands of oaks were felled every year. Oak has many other uses; oak bark has been used in leather tanning and in dyeing, insect galls have been used to make black ink, and the acorns are valued as food for livestock.

Pig grazing rights in oak woods, known as 'pannage', have been jealously guarded through the centuries. In the New Forest in southern England these rights are still exploited by Commoners (local people with rights to the forest's resources), though on a smaller scale than in the past. Acorns have also been roasted to produce a coffee substitute, apparently quite inferior to the real thing.

The majority of the oaks propagated at Kew are grown from seed. This method is preferred for the scientific collections as it is the easiest and safest means of collecting oaks in the wild without damaging their populations. Acorns are collected green and sown directly into the Arboretum Nursery field during the autumn. The seeds germinate the following spring. Oak seed does not store well and quickly becomes non-viable as it dries out. Mice and squirrels present a threat to the seeds, and netting or wire mesh is used to keep them at bay during autumn and winter. Rare oak specimens are sown in pots in a frost-free glasshouse for added protection.

Occasionally, young trees are also brought in from nurseries, for example to give instant impact in heritage plantings on the vistas. These are grown in a reputable nursery for 12 months where they can be inspected for pests and diseases before they are transplanted to Kew.

The fresh foliage of young oaks often suffers from mildew. Trees affected in this way are not treated because once they are planted out the mildew no longer presents a problem. It is often necessary to stake young trees. Tony Hall, who manages the oak collection at Kew, says that the Arboretum is treated as an extension of the nursery, in the sense that young trees there are carefully monitored during their early years.

The 'Coubertin oak' at Kew

The 'Coubertin oak' at Kew is one of a 'ribbon' of 40 English oaks ( Quercus robur ) planted between the Olympic Park in London and Much Wenlock in Shropshire, to celebrate the London 2012 Olympic Games.

It was grown from one of 40 acorns collected by students in Much Wenlock. The acorns were from a tree planted in 1890 in honour of Baron Pierre de Coubertin who was invited to visit the Wenlock Olympian Games, a local version of the Ancient Greek Olympic Games, by William Brookes. Brookes hoped to establish a modern version of the Games and following this meeting, the Baron went on to set up the International Olympic Committee and the first modern Olympics in Greece in 1896.

Students at William Brookes School grew the 'Coubertin oak' acorns into young trees which were then moved to the Arboretum Nursery at Kew where they stayed for two years to develop their root systems. They were then transferred to a nursery in Cambridgeshire for a further two years before the planting in April 2012.

Quercus robur is by far the most numerous species of tree at Kew and well over 1,000 specimens grow around the Gardens.

The hybrid Quercus × turneri (Turner's oak) can also be seen at Kew - a cross between the English oak ( Quercus robur ) and the holm oak ( Quercus ilex ). The semi-deciduous Turner's oak has been growing at Kew since the 18th century and was raised by Mr Turner (a nurseryman from Essex) in 1783. It was then planted in the original five-acre arboretum at Kew in 1798, where it stands today by the Princess of Wales Conservatory.

Compared to some oaks, Quercus × turneri is relatively small, growing to around 17 m. It generally develops a low, domed shape, with its twisting, horizontal branches sometimes barely above the ground. This gives an open feel to the tree, and creates a perfect opportunity for the enthusiastic tree climber!

Although the leaves of this hybrid are similar in colour to those of other oaks, they have a different shape. Instead of the familiar rounded leaf lobes of the English oak, those of Turner's oak form almost sharp, forward-pointing teeth.

The hurricane-like storm which ravaged the south of England, as well as parts of northern France, on the night of 15 October 1987 brought wind speeds of up to 185 km/h. It caused extensive damage to buildings and blew down around 15 million trees.

At Kew the entire root plate of the historic Turner's oak lifted, before settling back into the ground. Far from damaging the tree, this upheaval seemed to rejuvenate it. Previously it had been showing signs of stress and decline due to compaction of the root plate where so many people had taken shelter beneath the tree in the past. Indeed, Kew have learned from this and now routinely de-compact the root plates of the mature trees in the arboretum.