First published in Sp. Pl.: 847 (1753)
This species is accepted
The native range of this species is N. Africa to Eurasia. It is an annual and grows primarily in the temperate biome. 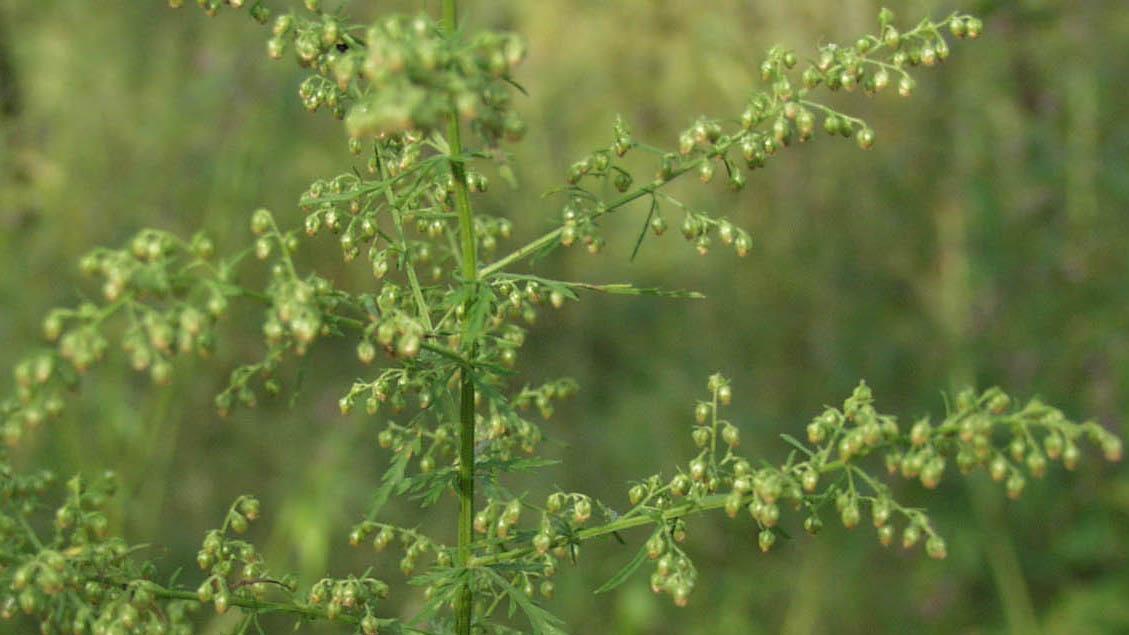 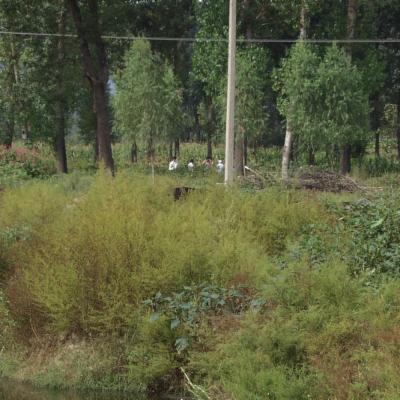 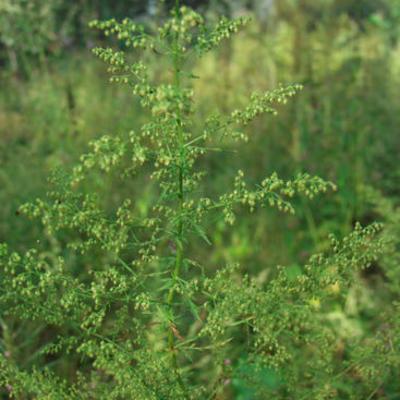 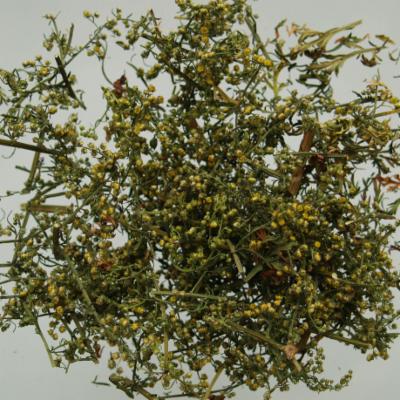 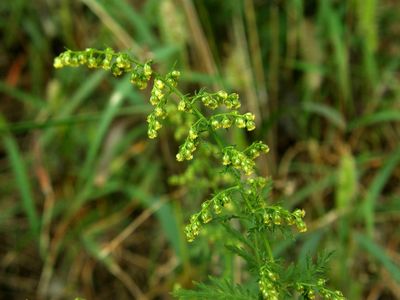 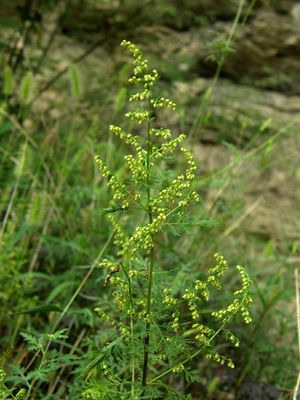 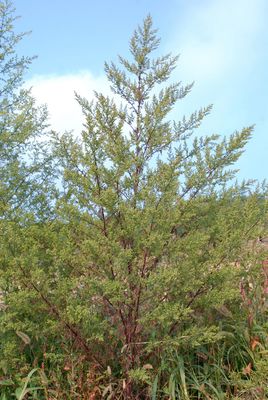 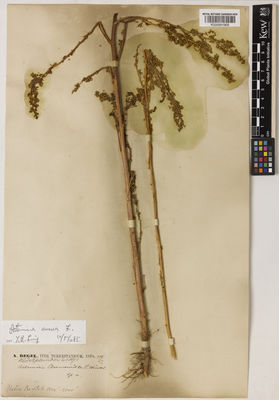 Sweet wormwood is an annual, aromatic herb from Asia, and has been used in China to treat fevers for more than 2,000 years. The genus Artemisia belongs to the Compositae (daisy and sunflower family) and includes well-known plants used in medicine, perfumery and the food and drink industry, such as A. dracunculus (tarragon), A. absinthium (absinthe) and A. vulgaris (mugwort). The ancient Greeks thought wormwood (A. absinthium) was a remedy for sea-dragon bites.

Sweet wormwood is the source of the Traditional Chinese Medicine (TCM) 'Qing Hao', which has been used for more than 2,000 years to alleviate fevers. In TCM it is often prescribed in combination with other herbs to treat (in addition to fevers) jaundice, headache, dizziness and nosebleeds. Scientific research into the anti-malarial activity of sweet wormwood began in the early 1970s in response to the increasing resistance to established anti-malarial drugs of the protozoan parasites which cause malaria (Plasmodium species). The chemical artemisinin, which occurs naturally in the leaves of sweet wormwood, is a potent anti-malarial agent, and can kill the most deadly malarial parasite, Plasmodium falciparum (it is selectively toxic to the asexual erythrocyte stage of the parasites). Artemisinin extracted from sweet wormwood has become extremely important in treating malaria, since resistance to many other anti-malarials has become widespread.

Artemisinin content varies widely depending on the provenance of the plants from which it is extracted. Many research programmes are underway focusing on the selection and cloning of high artemisinin-yielding chemotypes (plants that may be indistinguishable from one another in appearance but are nevertheless unique in their chemical composition). In addition, various chemically engineered artemisinin derivatives have now been developed based on the naturally occurring chemical.

Native to Eurasia, from south-east Europe (including Albania, Bulgaria, Montenegro, Romania, Russia, Serbia, Turkey) to Vietnam and northern India. Naturalised in many countries (including Argentina, Austria, the Czech Republic, France, Germany, Hungary, Italy, Poland, Slovakia, Spain, Switzerland and the United States). It has even been occasionally recorded growing wild in the UK, arising from bird seed or wool shoddy, and has been cultivated experimentally as far north as Finland.

Overview: Sweet wormwood is a single-stemmed, hairless, sweetly aromatic annual growing up to 1 m high (2 m in cultivation). The stem is erect, ribbed and brownish or violet-brown.

Flowers: The tiny flower heads (capitula) are globose, 2-2.5 mm in diameter and borne in loose panicles. The involucre (series of bracts around the flower head) is composed of hairless, overlapping bracts. The outer bracts are green and linear-oblong; the inner bracts are shiny and oval-round with a wide, thin, dry border. The flower heads are disciform, and composed of outer filiform florets (female) and inner disc florets (bisexual). The numerous central disc florets are greenish or yellowish.

Fruits: The fruit is a yellow-brownish cypsela (small, dry, thin-walled fruit), 0.6-0.8 mm long, with a shiny surface marked with vertical grooves and containing a single seed. The cypselas have no pappus, and hence are not wind-dispersed, as are many other members of the Compositae.

Since the early 1990s there has been a large increase in the range of plant-based products entering the world trade for use in cosmetics, herbal medicines (especially Traditional Chinese Medicines), functional foods, potpourri, colouring agents and pet products. Kew carries out research into such products, using a range of morphological as well as chemical and DNA fingerprinting methods to identify the species of plants being traded, and to study whether plant-derived products contain the specific compounds appropriate to their proposed use. Over 1,000 species and over 1,500 plant extracts have been studied so far. Although in most cases the correct species has been traded, Kew researchers have encountered a few incidents when the wrong species, or poor quality substitutes, have been sold. The potential for over-exploitation of certain species is also a concern, especially those that are harvested in the wild, and where sustainable harvesting practices should be developed to avoid adulterants or poor-quality material entering the trade.

Collections of Artemisia annua seeds are held in Kew's Millennium Seed Bank based at Wakehurst in West Sussex.

Sweet wormwood is widely planted commercially as a source of essential oils and artemisinin. It does best in open, sunny positions on fertile, sandy loams and alluvial soils, which are neutral to slightly acid and moisture-retentive. It will not tolerate drought or waterlogging. Artemisinin is extracted industrially from cultivated Artemisia annua in China, Vietnam and elsewhere. In China and Vietnam, the life-cycle of A. annua is completed in ten months under natural conditions. Seeds germinate from January to March, and fruiting takes place between October and November. In Europe and America, plants grow more rapidly, completing their life-cycle in just six months, even in the open. Germination occurs in May, and seeds can be harvested in November.

Sweet wormwood was exhibited at Kew for the summer festival in 2014.

Pressed and dried specimens of sweet wormwood are held in Kew's Herbarium, where they are available to researchers by appointment.

Authentic, fully verified and vouchered reference samples of Artemisia annua prepared for use as a Traditional Chinese Medicine (shade-dried flowering stems harvested in China) are held by Kew's Chinese Medicinal Plants Authentication Centre. These, and other dried flowering branches of A. annua , are held in the Economic Botany Collection in the Sir Joseph Banks Building and are available to researchers by appointment.

Use
Medicinal, important anti-malarial, essential oil used in cosmetics, cultivated as an ornamental in Indonesia.