Paper birch gets its name from its smooth, white, paper-like bark that can be peeled off in large pieces. The flexible and waterproof bark has long been used as a raw material and the soft, whitish wood is used commercially to make items such as toothpicks and ice lolly sticks. 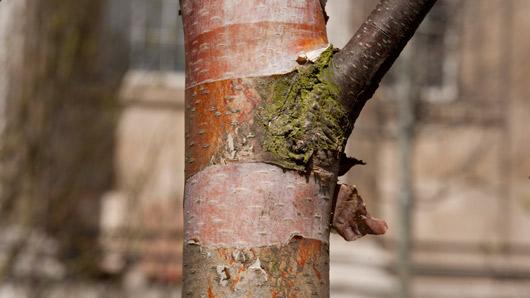 Paper birch gets its name from its smooth, white, paper-like bark that can be peeled off in large pieces. The flexible and waterproof bark has long been used as a raw material and the soft, whitish wood is used commercially to make items such as toothpicks and ice lolly sticks.

It is a pioneer species that colonises new environments, for example open spaces created by logging or forest fires. It grows rapidly when exposed to full sunlight and produces large numbers of winged seeds, which can travel long distances on the wind.

Betula papyrifera was adopted as the state tree of New Hampshire (USA) in 1947.

The bark has been used medicinally throughout history; as a poultice for wounds, a cast for broken bones and as part of a decoction for treating respiratory disorders.

Native to North America, paper birch is found from Alaska eastwards across Canada to Quebec and Nova Scotia and southwards to the US states of Washington, Montana, Missouri, New England and New York, at 300-900 m above sea level. There are also isolated populations in Nebraska, Iowa, North and South Dakota and on mountains in Virginia and North Carolina

Paper birch bark is waterproof as a result of its high oil content. This quality, alongside its flexibility, has led to its use in the construction of canoes, paddles, tepee covers, waterproof wrappings, water vessels and clothing by Native Americans. In the case of canoes, several of the outer layers of the trunk were used to create a more rigid structure than would be possible with just the paper-like outer layer. The sweet inner bark can be eaten or boiled to make a drink. Native Americans and early European colonists used sheets of bark as paper.

The bark is still used in Canada today, where baskets and 'bark-biting' artwork are sold to tourists. Bark sheets are also used commercially for handicrafts and floral arrangements.

Paper birch timber is used for turning, shoe-lasts (the solid form around which a shoe is moulded), clothes pegs, toothpicks, ice lolly sticks, broom handles and fuel. Paper birch is also used as a pulp wood, with the pulp being used for the production of paper, paperboard and toilet and facial tissue.

Introduced to Europe in around 1750, paper birch is still cultivated widely as an ornamental in temperate gardens, in particular for its attractive white bark.

A collection of Betula papyrifera seeds is held in Kew's Millennium Seed Bank based at Wakehurst in West Sussex.

Like most birches, paper birch grows best in a well drained sandy or clay soil where winter water-logging is unlikely. It will succeed on heavier soils, but growth there is slower; the tree is likely to be shorter-lived on the latter. Paper birch does not compete well in shaded woodland situations, so for this reason alone it is best planted in open sunny sites. This positioning will also maximise the effect of the white bark and reduce growth of algae and mosses that would otherwise dull the stems.

Paper birch can be seen growing near Brentford Gate, near the Bamboo Garden and beside the Lake at Kew.

Paper birch forms a substantial part of the National Plant Collection of Betula species based at Wakehurst. The collection can be found in Bethlehem Wood, near the Millennium Seed Bank, where around 20 specimens of paper birch can be found. There are other specimens in Horsebridge Wood, amongst the North American tree collections, and in the ornamental gardens near the Mansion (in the Oaks, Tony Schilling Asian Heath Garden and in the Water Garden).

Pressed and dried specimens of Betula papyrifera are held in the Herbarium at Kew where they are available to researchers by appointment.

Specimens of the wood and bark of paper birch and water vessels, plates and a box of dominoes made from it, are held in Kew's Economic Botany Collection in the Sir Joseph Banks Building, where they are available to researchers by appointment.

Use
Bark (used to make canoes and many other items), timber, wood pulp, medicinal, ornamental. 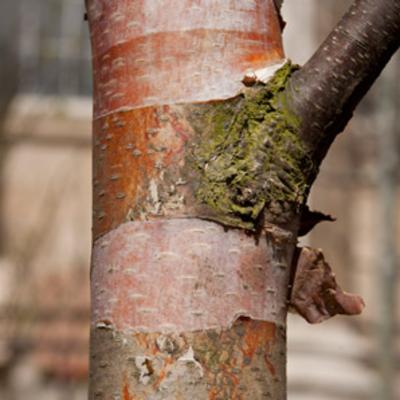 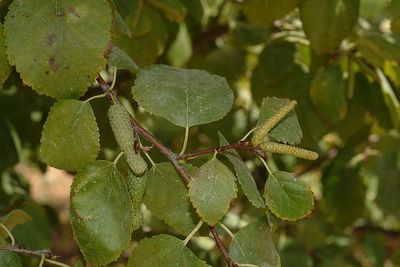 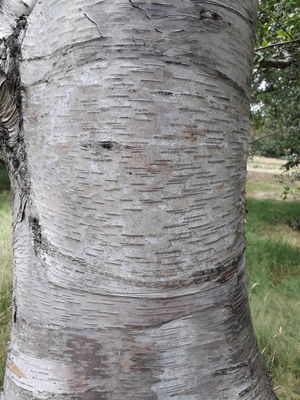 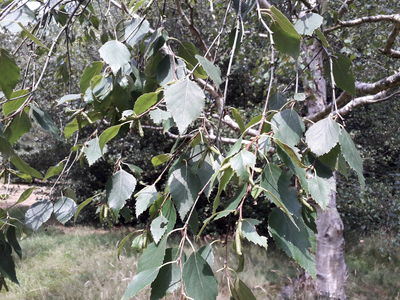 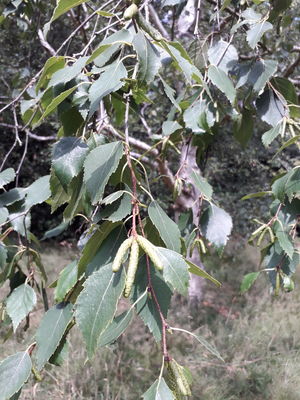 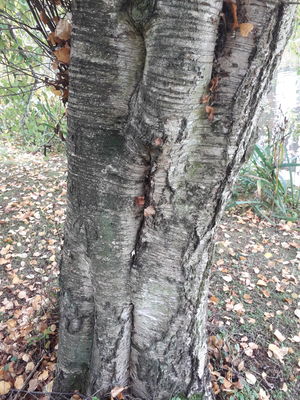 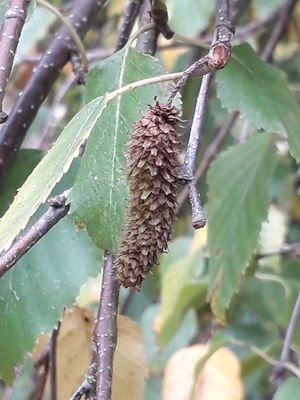 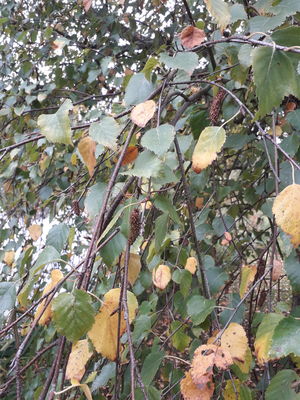 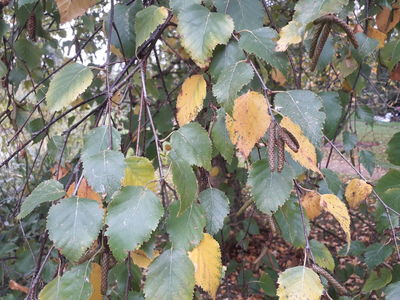 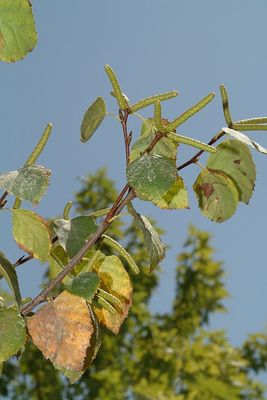 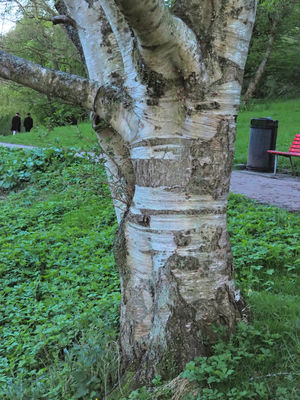 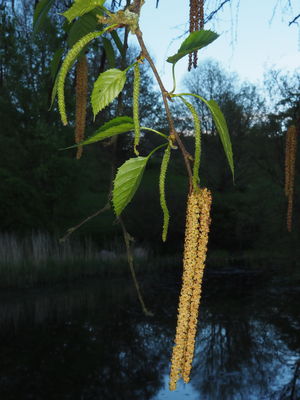 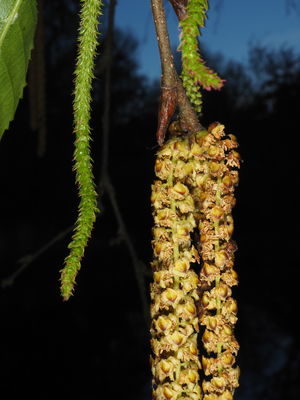 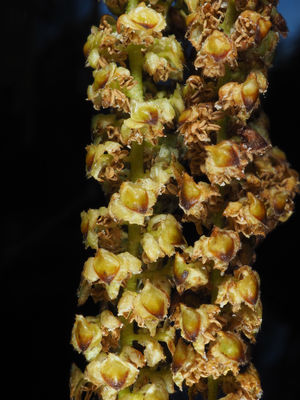 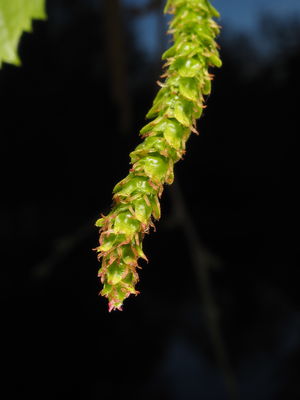