This exotic evergreen gets its common name from the French chenille, meaning hairy caterpillar, whilst also referring to the velvety strands of chenille yarn. This soft, tufted yarn has the characteristic texture and appearance echoed in the pendulous flowering tassels of chenille plant. 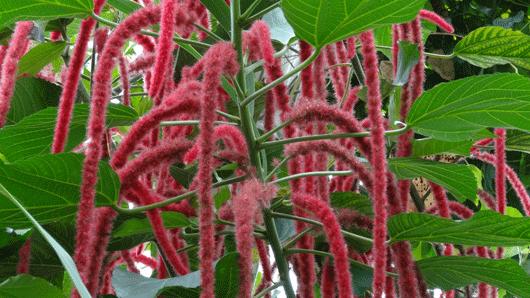 This exotic evergreen gets its common name from the French chenille, meaning hairy caterpillar, whilst also referring to the velvety strands of chenille yarn. This soft, tufted yarn has the characteristic texture and appearance echoed in the pendulous flowering tassels of chenille plant.

It is also known by the common name 'red hot cat's tail', in relation to the dense and fluffy appearance of the inflorescences (flowering parts), thought by some to be reminiscent of a cat's tail.

The generic name Acalypha is from the Greek for nettle, as nettle leaves are similar to those of some Acalypha species. The specific epithet hispida derives from the Latin hispidus, meaning hairy or bristly, which describes the appearance of the drooping red inflorescences.

Chenille plant is a cultigen (a plant that has been altered by humans through a process of selective breeding) and its exact origin is unknown. It is widely cultivated as an ornamental for its decorative, colourful and texturally exciting flowers.

The exact origin of Acalypha hispida is unknown. It is possibly native to Malesia (a floristic region that includes the Malay Peninsula, the Malay Archipelago, New Guinea, and the Bismarck Archipelago).

It has been introduced to many other tropical countries and is naturalised in the tropical regions of Africa, America and Asia.

Overview: A showy, tropical shrub up to 3 m tall and 3 m wide, but generally kept smaller in cultivation by pruning. Vigorous, erect, sparsely branched with smooth, green bark. Inflorescences are unisexual and plants are likely to be dioecious: producing distinct staminate (male) and pistillate (female) flowers on separate plants (although only female plants are known).

Flowers: Borne in attractive, pendant catkin-like inflorescences, 30-50 cm long by 0.8-1.0 cm wide, ranging in colour from deep purple to bright red. Individual female flowers about 1 mm wide, lacking in petals but bearing feathery, brightly coloured stigmas, are borne in tight clusters on the axis of the inflorescence. These showy, velvety catkins are produced sporadically throughout the year. They are very long-lasting, gradually fading and browning as they age.

Fruits: Only female specimens are known, and fruits and seeds have not been recorded.

Chenille plant is widely cultivated as an ornamental, for its long, slender, drooping inflorescences. A perennial with a long flowering-period, it is often used as a centrepiece for tropical or subtropical gardens. With proper care and favourable conditions, it will bloom several times a year. It is commonly used as an accent, for informal borders and hedges, or as a specimen or container plant.

It has been given the Royal Horticultural Society's Award of Garden Merit for its excellent use as a decorative garden plant.

Acalypha hispida has been used in traditional remedies, as a laxative, diuretic, expectorant (for asthma) and in the treatment of leprosy and kidney ailments. The bark, flowers and roots have been used to create medicines for the relief of asthma symptoms. The roots have been boiled and the resulting liquid drunk to treat dysentery.

In Indonesia, a root and flower decoction is used to stop patients coughing up blood. In Africa, a poultice of the leaves is used to treat leprosy. In Malaysia, a decoction of leaves and flowers is externally applied to treat wounds and ulcers and is taken internally as a laxative and as a diuretic.

Research into the medicinal properties of chenille plant has revealed a range of possible uses. Scientific research has established the antifungal properties and antimicrobial activity of extracts of leaves, supporting their use in the treatment of thrush, wounds and ulcers. Alcoholic extracts of chenille plant have been reported to be biologically active against bacteria such as Pseudomonas aeruginosa , Escherichia coli , Staphylococcus aureus and Salmonella typhi. Screenings to determine the chemical properties of aqueous and leaf methanolic extracts showed the presence of phenolics, flavonoids, glycosides, steroids, saponins, phlobatannins and hydroxyanthraquinones, which indicate its potential use in healthcare. A recent scientific investigation revealed that chenille plant could be a potential source of antioxidants, used as a future therapy against diseases such as cancer and coronary heart disease.

As only female plants are grown, chenille plant must be propagated via cuttings. At Kew, specimens are grown in the glasshouses at high temperature and high humidity. Plants require regular watering, feeding and pruning to keep them healthy and in a good shape.

In warmer climates, chenille plant can be grown outdoors in fertile, humus-rich, moist but well-drained soil, in sun or part shade.

Chenille plant can be seen growing in Kew's Palm House and Waterlily House.

A specimen of Acalypha hispida wood is held in Kew's Economic Botany Collection, where it is available to researchers by appointment.

Distribution
Malaysia, Papua New Guinea
Ecology
Only known in cultivation; naturalised on roadsides and in secondary forest.
Conservation
Widespread in cultivation (but only females plants are known).
Hazards 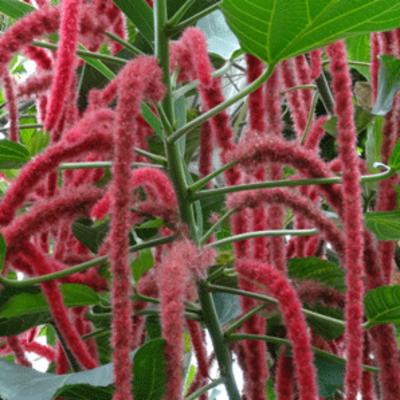 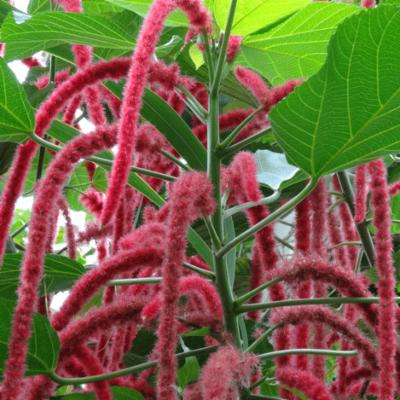 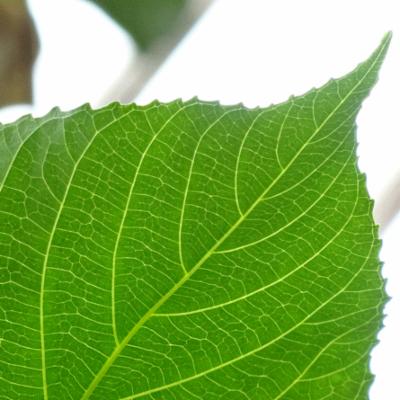 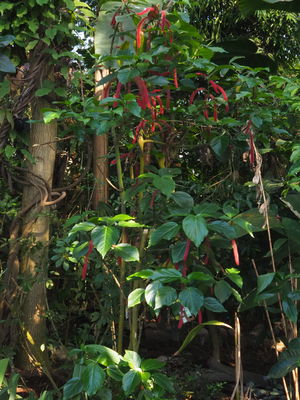 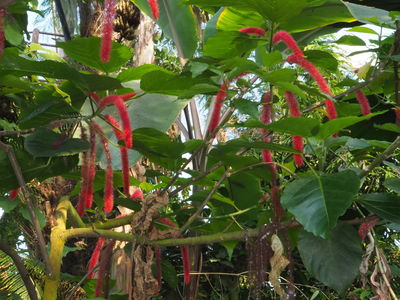 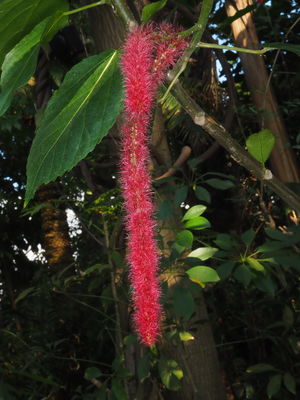 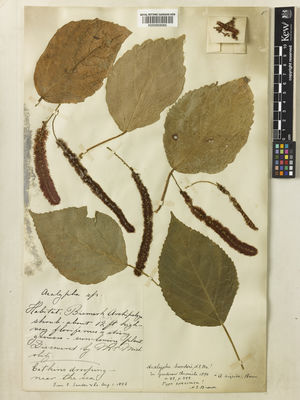 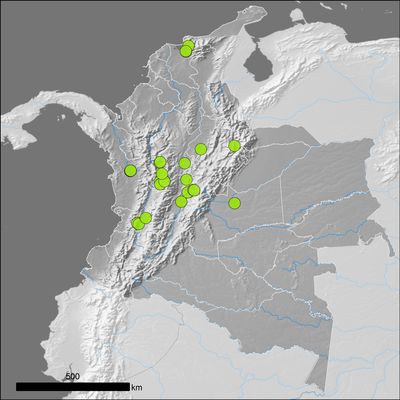