First published in Sp. Pl.: 228 (1753)
This species is accepted
The native range of this species is NE. Spain to Alps, Central Italy to Carpathians. It is a perennial and grows primarily in the temperate biome. 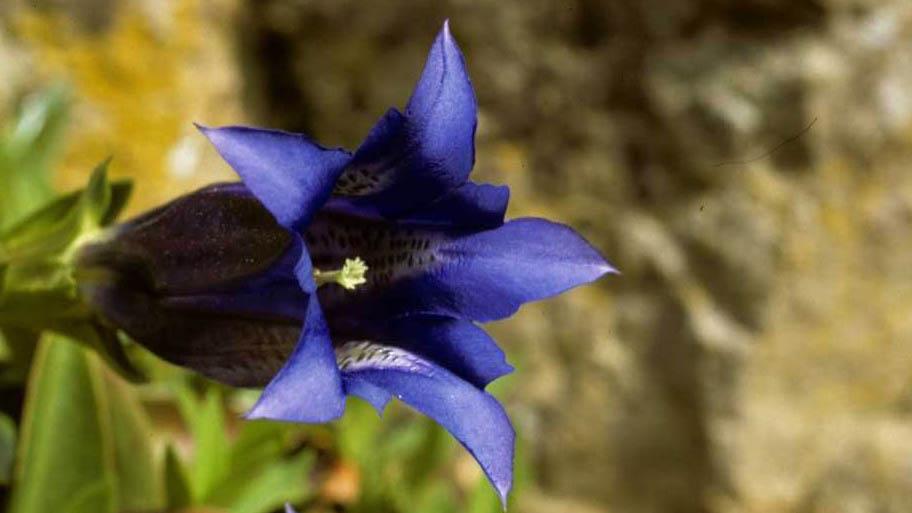 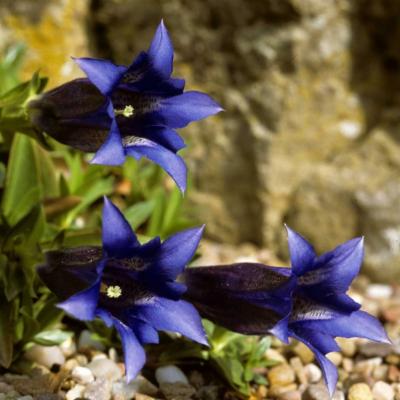 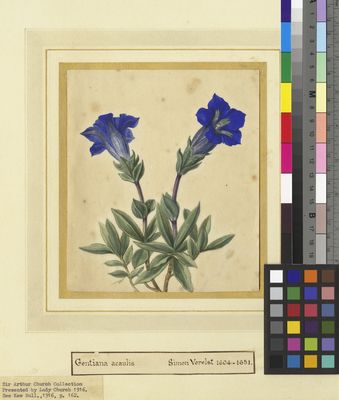 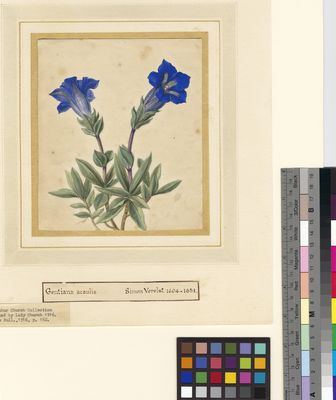 General Description
Stemless gentian is a central European species and can be seen on the back of the Austrian € 0.01 (one euro cent) coin. It has also been chosen as the logo of the Alpine Garden Society.

Gentiana acaulis was in cultivation as long ago as the 18th century. The spring-flowering Gentiana acaulis was the first gentian to be featured in the Curtis's Botanical Magazine, appearing in the second volume in 1788. The name 'acaulis' means stemless. Acaulis is also used as a group name covering a number of gentians with very short stems in which the flowers appear to sit directly on the mat of leaves.

This species is found in the Balkans and the mountains of southern and central Europe, including the Alps, Pyrenees and Carpathians.

Its large, trumpet-shaped flowers are held close to the mat of lanceolate (narrow and tapering to a point) or elliptic leaves, on a short stem that elongates in fruit. The glorious, deep blue flowers can reach up to 7 cm long and have green spots in the throat (where the petal tube widens). The five pointed corolla lobes (petals) are 6-9 mm long and are separated by small triangular lobe-like plicae (folds).

The other species in the 'Acaulis group' differ from Gentiana acaulis in the shape of the leaves, the shape of the sepals, their size relative to the corolla (petals), and the markings on the inside of the flower.

Gentiana acaulis is cultivated as an ornamental.

Several species of gentians, most notably Gentiana lutea (yellow gentian) and G. acaulis , are used in tonic preparations and some anti-smoking formulas, as well as in cosmetics. Traditionally, they have been used to make bitters to stimulate appetite, improve digestion, and treat gastrointestinal complaints, and they are still used in the food industry today. G. acaulis has also been used to treat wounds, sore throat, arthritic inflammation, and jaundice.

Gentiana acaulis grows naturally in acidic soils but will tolerate mildly alkaline conditions. It is best grown in an exposed position in full sun, firmly planted in soil that does not dry out completely. Additional watering may be necessary during dry periods. In less exposed situations, the mat of leaves can become loose and the stems elongate. The stem of Gentiana acaulis is very short at first but can reach 15 cm long by the time the seeds are ripe.

It is often stated that G. acaulis can be shy to flower. Where this proves the case, planting in different locations is worth a try, in order to find a place where the plant is happy. Alternatively, it may be that the plant in question is a clone that rarely or never blooms, so new material should be sought. Over the years, many authors have suggested feeding to encourage blooming, and a high potash liquid fertiliser, applied in midsummer and again in early spring, is well worth trying.

The normal flowering period is from March to May but the odd flower can appear throughout the summer and well into autumn. Established plants will form a dense carpet of leaves and regular division may be needed to keep them flowering.

The tendency for G. acaulis to produce stolons (a horizontal shoot at or just below the soil surface) and runners ensures a good supply of material for cuttings. From midsummer onwards, rosettes of leaves with a short portion of stem can be removed and potted in a free-draining cuttings mix. Propagation from seed sown in autumn is also straightforward, as long as the seed is fresh.

Gentiana acaulis can be seen in the in the Rock Garden at Kew, and also at Wakehurst.

Leaves of Gentiana acaulis , used in medicine, are held in Kew's Economic Botany Collection, where they are available to researchers, by appointment.

Ecology
Rocky meadows, screes and alpine and subalpine coniferous forests; at altitudes of 1,700 to 3,000 m.
Conservation
Not Evaluated according to IUCN Red List criteria.
Hazards