First published in Sp. Pl.: 680 (1753)
This species is accepted
The native range of this species is Central & SE. Europe to W. Türkiye. It is a perennial and grows primarily in the temperate biome. 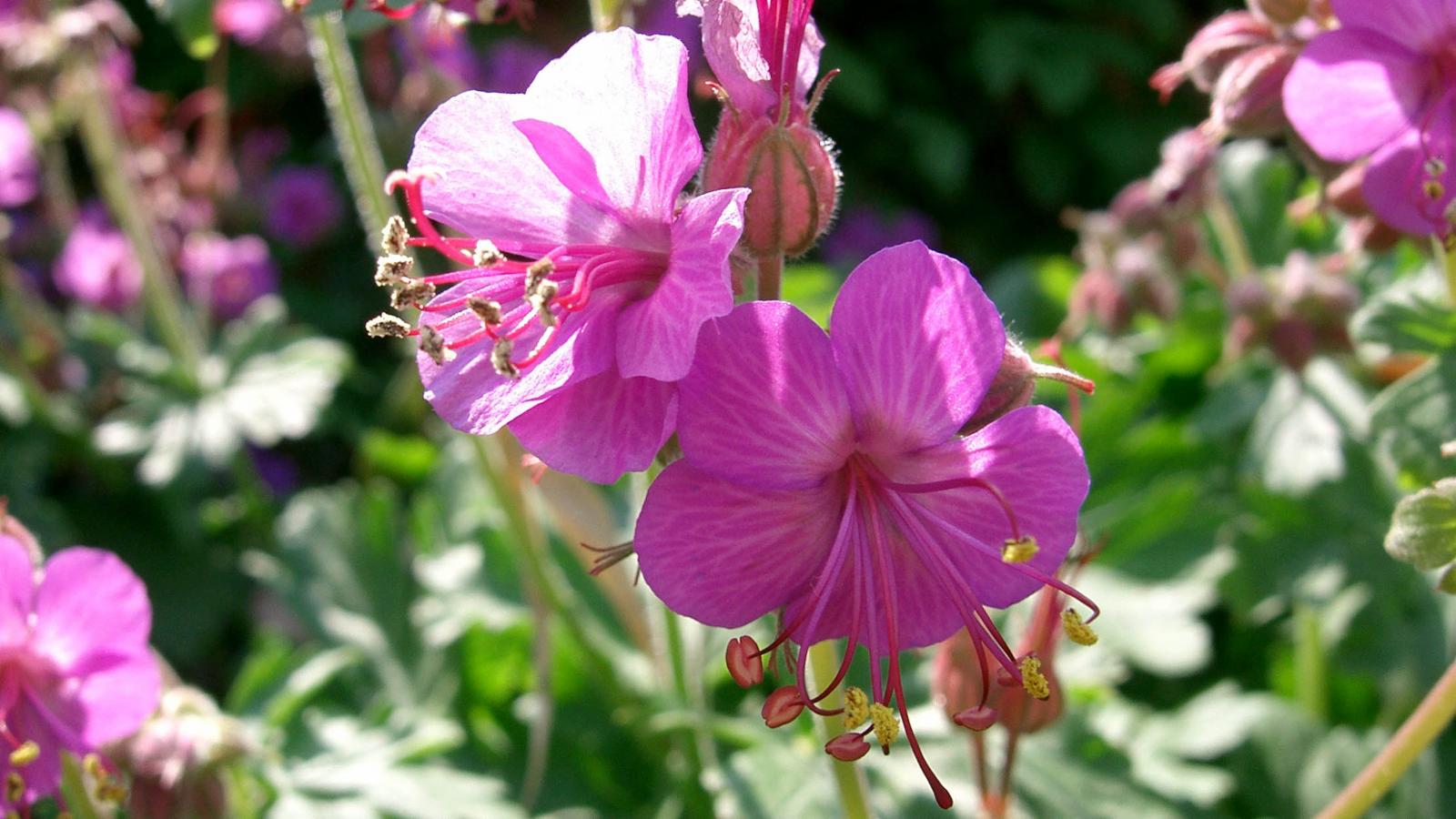 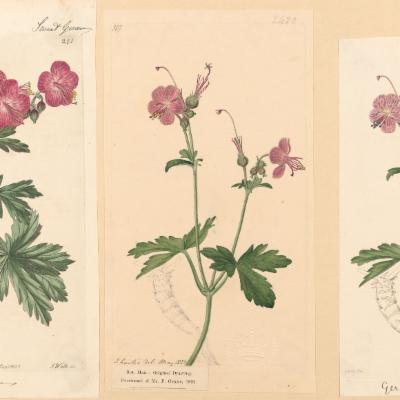 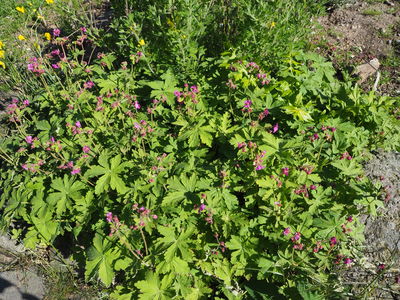 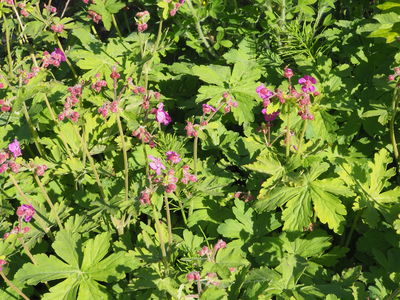 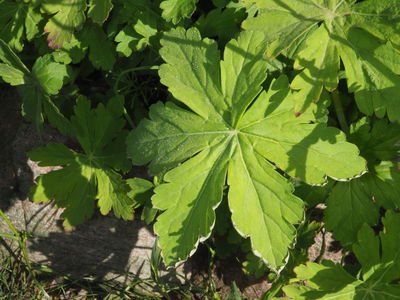 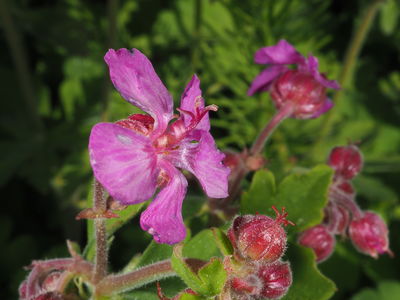 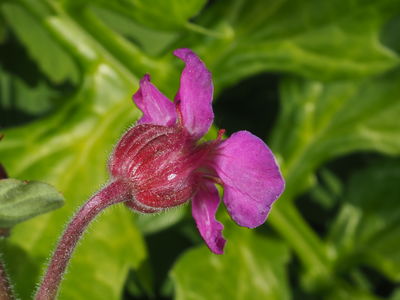 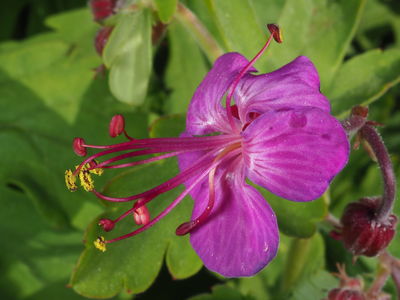 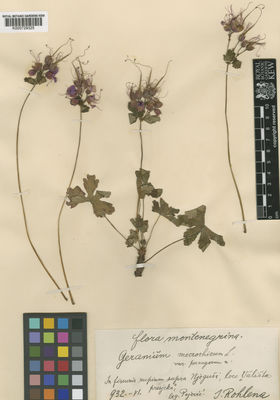 Geranium macrorrhizum has a thick, succulent rhizome (underground stem) and soft, deeply divided, aromatic leaves. The flowers are produced in the spring and summer, and have a reddish calyx and pink, reddish-purple or rarely white petals. The specific epithet macrorrhizum refers to its large rhizome.

Native to Europe (from France to Greece and Romania), where it is found in the southern Alps, Apennines, Balkan Peninsula and Carpathians. It is occasionally found as a garden escape in Great Britain and elsewhere.

The rhizome (underground stem) is thick and fleshy, and creeping when reaching the surface. The leaves are aromatic, soft and minutely velvety, around 7 cm across, deeply divided into 5-7 lobes and are borne on stalks of around 10 cm long. The leaves become reddish in the autumn. The flowers are borne on branching stems of up to 30 cm tall. Each flower is 1.5-2 cm across, with five rounded, pinkish-purple, pink or rarely white petals and a reddish calyx.

The cultivar Geranium macrorrhizum 'Album' has white flowers with a reddish calyx. It was first found in the Rhodope Mountains in Bulgaria, but is now naturalised elsewhere (including in Great Britain), having escaped from cultivation. G. macrorrhizum 'Bevan's Variety' has large, bright reddish flowers, while G. macrorrhizum 'Variegatum' has irregular cream markings on the leaves. There is also a variety called 'White-Ness', sometimes cultivated, with a green calyx and white petals.

Geranium macrorrhizum is common in rocky woods in mountains, and is not considered to be threatened.

A very useful ornamental for ground cover under shrubs, or for other dry, shady places where little else will survive. Geranium macrorrhizum thrives in dry or moist places, in sun or shade, and is excellent for attracting bees. It can become slightly invasive in some gardens, but is easily kept in check by cutting through the rhizomes using a spade.

In Bulgaria, G. macrorrhizum is widely grown as a cultural symbol associated with health and good luck.

It is the source of Zdravetz oil, which is used in traditional medicine as both a stimulant and as a carminative, and is also used as a fixative in perfumery. Zdravetz is a Bulgarian word meaning 'health'. The essential oils found in both the aerial parts and rhizomes have been shown to have antibacterial activity.

Easily grown in dry locations in partial shade. In cooler parts of northern Europe it performs best in full sun. Geranium macrorrhizum can be propagated easily by dividing and replanting the rhizomes in autumn or spring.

Geranium macrorrhizum can be seen growing alongside the Rock Garden and in the Queen's Garden (adjacent to Kew Palace).

There were several Geranium species - and cultivars of Geranium species - featuring in Kew's garden at Chelsea, which was awarded a Silver Medal. A cultivar is a cultivated variant of a species, which is often called a 'variety' in the horticultural trade. Cultivars usually have characteristics that make them more desirable to growers, for example a carrot that is sweeter than its wild relative or a rose with less thorns than its wild counterpart.

Ecology
Rocky places on limestone, often in shade.
Conservation
Not considered to be threatened, but not yet evaluated according to IUCN Red List criteria.
Hazards