Xanthorrhoea preissii was first described as new to science by the Austrian botanist Stephan Endlicher in the 1846 volume of Plantae Preissianae, but has been known to the Aboriginal people of Western Australia for millennia. Members of the genus Xanthorrhoea are commonly referred to as grasstrees, alluding to their tree-like appearance, with stout trunks and grass-like leaves fanning out from the crown. The dense flowering spikes of X. preissii can reach an impressive 3 m in length and are a prominent feature of the landscape in south-west Australia. 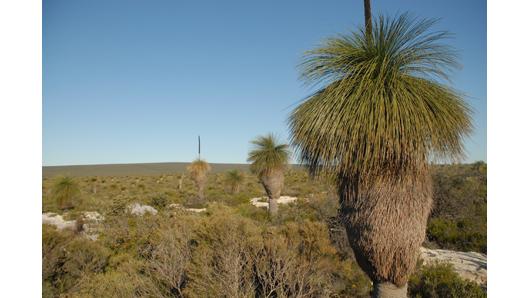 General Description
A prominent species of the coastal plains and adjacent forests of south-west Western Australia, the tall, thin flowering spikes of Xanthorrhoea preissii emerge from a crown of grass-like leaves on a sturdy trunk, giving it an unusual profile.

Xanthorrhoea preissii was first described as new to science by the Austrian botanist Stephan Endlicher in the 1846 volume of Plantae Preissianae, but has been known to the Aboriginal people of Western Australia for millennia. Members of the genus Xanthorrhoea are commonly referred to as grasstrees, alluding to their tree-like appearance, with stout trunks and grass-like leaves fanning out from the crown. The dense flowering spikes of X. preissii can reach an impressive 3 m in length and are a prominent feature of the landscape in south-west Australia.

The plants are resistant to fire, which can stimulate prolific flowering, and the blackened trunks can re-sprout within a few months of a fire passing. Coloured bands caused by melting resin along the stems of grasstrees can be used to age plants and also to estimate the frequency of past fires affecting individual plants; this includes natural fires and those initiated by Noongar Aboriginal people as part of their land management. Some researchers have extrapolated the fire frequency data from individual balgas to whole landscapes in which they occur, and concluded that burning of the vegetation by Noongar Aboriginal people was frequent, leading to the initiation of inappropriate modern fire management to try to emulate past conditions. However, more recent research indicates that historical Noongar burns across landscapes were actually less frequent than supposed, and that the vegetation was allowed to recover for longer periods, even where individual balgas were burnt more frequently for cultural purposes.

Xanthorrhoea preissii is restricted to south-west Western Australia, where it is widespread.

A tree-like monocot (plant with a single seed-leaf) up to 5 m in height, with contractile roots that shrink vertically in seasonal drought conditions, and a trunk up to a height of more than 3 m. The stem is simple or branched and bears one to several uneven crowns. The thick, green leaves are up to 2.8 mm wide and 2.4 mm thick (but are very variable) and are diamond-shaped in cross-section. The scape (leafless flower stalk) is 60-100 cm long and 20-30 mm in diameter. The flowering spike is 150-250 cm long (about 2-3 times longer than the scape), and 30-60 mm wide.

The white or cream flowers are in spirals; the petals are recurved with a proboscis (elongated projection). The  flowers are insect-pollinated. Flowering occurs all year round, but the main season is from June to December. Prolific flowering is stimulated by fire. Arborescent (tree-like) monocots grow very slowly, grasstrees only increasing their stem height by approximately 1-2 cm per year. Recent attempts to age specimens of Xanthorrhoea preissii have given maximum age estimates ranging from 350 to 600 years.

Xanthorrhoea preissii is not a threatened species but it does form part of an endangered ecological community, the Corymbia calophylla - Xanthorrhoea preissii woodlands and shrublands of the Swan Coastal Plain. This community occurs in only one small part of the species' range, on drier soils on the eastern part of the Swan Coastal Plain. There are approximately 41 hectares of this community remaining in south-west Australia and of these, only 0.3 hectares are formally protected in state Nature Reserves. Those areas not under protection are threatened by clearing, invasive weeds and changes in hydrology due to clearing and draining. The community is also susceptible to an excessive frequency of fires and to the fungal root pathogen Phytophthora cinnamomi .

The Aboriginal Noongar people of south-west Western Australia use the resin from Xanthorrhoea species as a reusable thermoplastic. Globules of resin are collected from the bases of old leaves close to the trunk, ground to powder, mixed with charcoal powder and plant fibre or kangaroo dung, heated and added to the handle of the implement under construction. Small bits are then reheated and used as required, for example to fix or replace stone knife blades (taap) and axe heads onto their wooden shafts.

The plants also provide a source of materials for hut (mia) construction and individual plant parts have a variety of other uses. The flowering stems can be used as fish spears and can also be rubbed together to make fire. The dried flower heads and old withered flowers are used as kindling, the leaves are used for torches, and young shoots are used for medicinal purposes to promote healing from wounds.

Flowering begins on the warm (north) side of plants so X. preissii can also act as a compass plant. Dead plants are also useful, and are owned by individuals as a source of highly nutritious bardi grubs (larvae of the beetle Bardistus cibarius ). Xanthorrhoea preissii is also used in the restoration of vegetation on the sites of abandoned bauxite mines, and are planted widely in gardens and streetscaping.

Germination testing : 87% germination was achieved on moist filter paper medium, at a temperature of 23 °C, on a cycle of 12 hours daylight / 12 hours darkness.

Specimens of wood, trunk and resin from X. preissii are held in the Economic Botany Collection, and are available to researchers by appointment.

Xanthorrhoea preissii (balga) was one of 12 star plants featured in the Landscape, which took you on a journey across a whole continent, from eastern Australia's coastal habitat, through the arid red centre, to the western Australian granite outcrop featuring unique and highly endangered plants.

None known, although several other species of Xanthorrhoea are poisonous to cattle and it is thought likely that most species in the genus are poisonous. 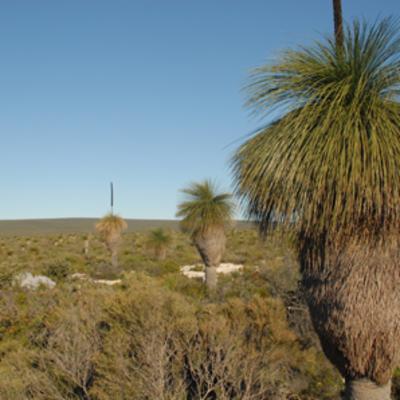 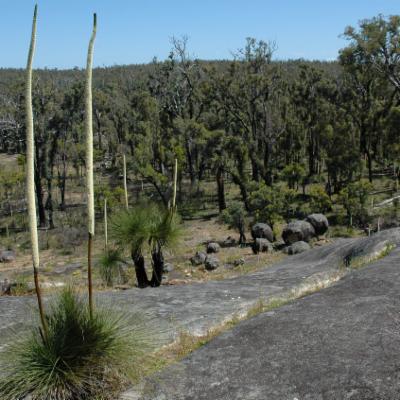 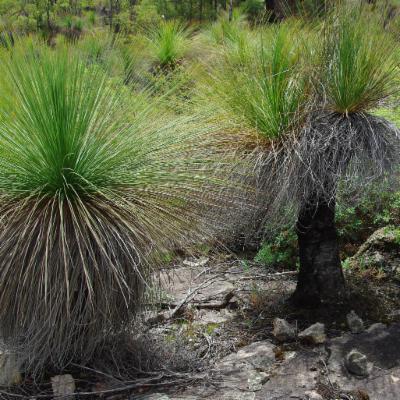 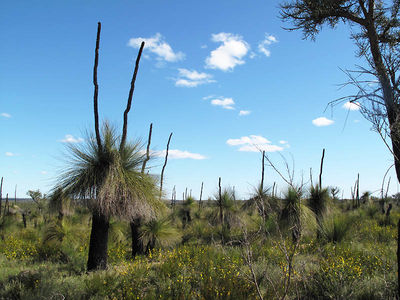 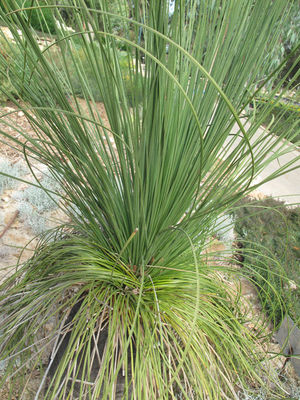 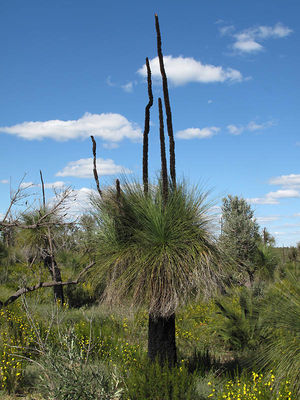