Cootamundra wattle was first described from a tree growing in Bowen's Park, Brisbane, when material from this specimen was sent by Mr F.M. Bailey to the veteran German-Australian botanist, Ferdinand von Mueller. He named it in 1888 in honour of the sender, so commemorating F.M. Bailey's pioneering work on the Flora of Queensland. 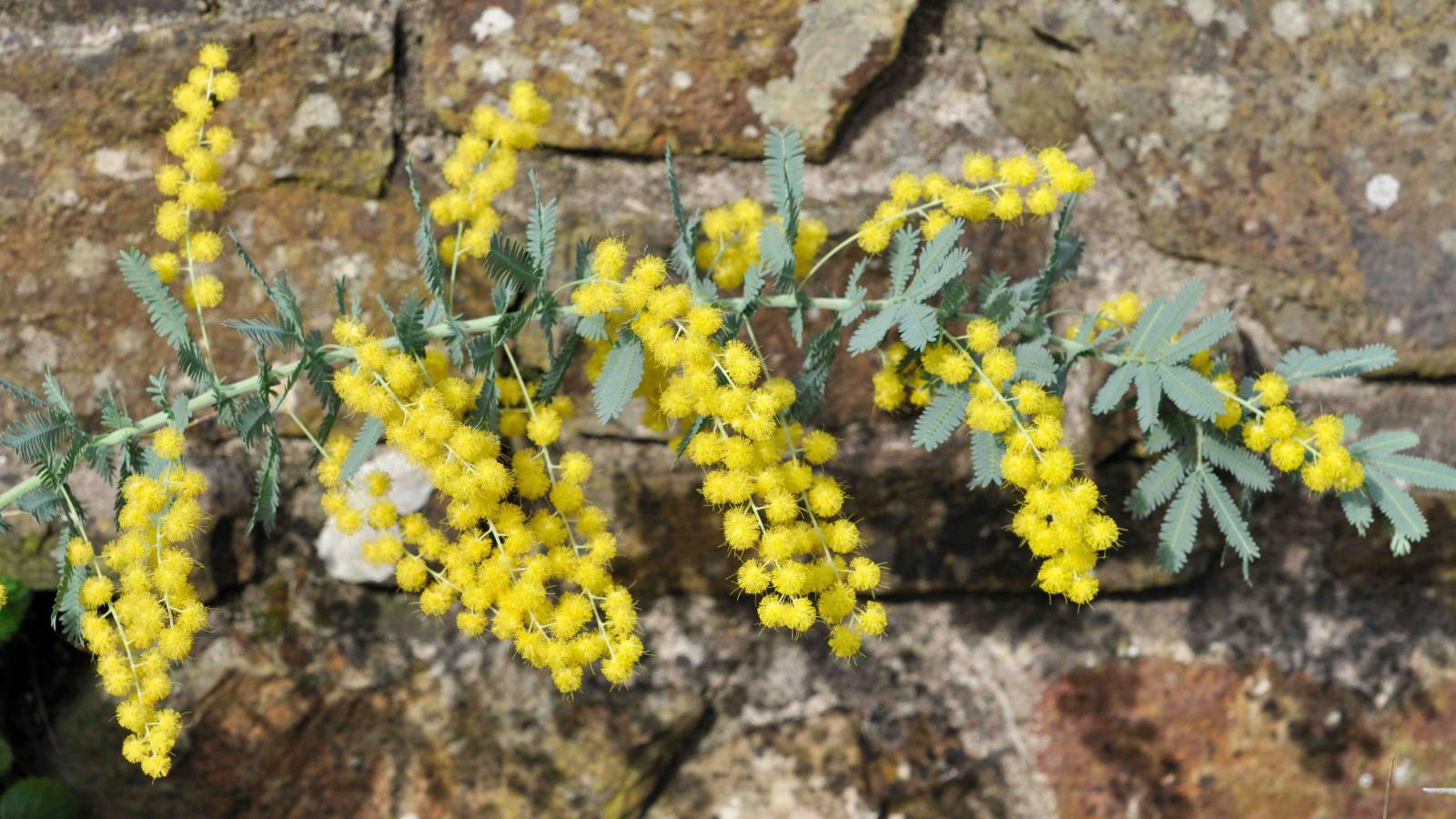 General Description
Cootamundra wattle is a graceful tree with beautiful fern-like foliage and bright golden-yellow flower heads, and is widely cultivated as an ornamental.

Cootamundra wattle was first described from a tree growing in Bowen's Park, Brisbane, when material from this specimen was sent by Mr F.M. Bailey to the veteran German-Australian botanist, Ferdinand von Mueller. He named it in 1888 in honour of the sender, so commemorating F.M. Bailey's pioneering work on the Flora of Queensland.

The first record of Acacia baileyana being cultivated in the UK is in the Gardeners' Chronicle for 1894, where it was illustrated from a specimen grown at the Cambridge Botanic Garden. Following that, it became a firmly established favourite for the decoration of winter gardens and large conservatories. Its habit of flowering in the winter (December-March), at a time when other trees and shrubs lack flowers, enhances its value in the Northern Hemisphere.

Cootamundra wattle received an Award of Merit from the Royal Horticultural Society for specimens exhibited by Mr Cecil Hanbury of La Mortola on 27 January 1927.

Native to southern New South Wales (around Cootamundra and Wagga Wagga at the sources of the Murrumbidgee River and on some of the southern tributaries of the Lachlan River), Australia. Cultivated and naturalised in other parts of Australia and elsewhere in other tropical areas around the world.

Overview: A shrub or small tree up to 8 m high, with dense, arching branches covered with a grey or slate-coloured bark. The twigs are covered with fine, soft hairs when young.

Leaves: The leaves are bipinnate, with three or four pairs of pinnae. The petiole (leaf stalk) is very short, about 1-2 mm long. Circular cushion-like glands are present where the pinnae join the slender rachis (main axis). The leaflets are bright glaucous-green, hairless and 3-6 mm long.

Flowers: The inflorescences are borne in dense racemes at the ends of branches. The globose flower heads are bright golden-yellow and about 5 mm in diameter, each containing about 10-20 flowers.

Fruits: The fruit is a narrow, oblong pod, 4-8 cm long and about 1 cm wide, with almost parallel edges. The seeds are ellipsoid and laterally compressed, 6 mm long, black and shiny, with a boat-shaped arillar appendage.

Acacia baileyana is native to a very restricted area of New South Wales. Samples of seed have been stored in Kew's Millennium Seed Bank as an ex situ conservation measure.

Outside its native area, Cootamundra wattle has sometimes spread from garden plantings to become an environmental weed. Invasive populations occur in several Australian states. It has also become naturalized in New Zealand and California, while in South Africa it is a Declared Weed and Alien Invader.

Acacia baileyana is grown as an ornamental, for its attractive flower heads and foliage, in New Zealand, South America, South Africa and southern Europe. It produces abundant pollen and is used as a bee plant in the production of honey. It is also used in the dyeing of wool.

Number of seed collections stored in the Millennium Seed Bank: One.

Seed storage behaviour: Orthodox? (the seeds of this plant survive drying without significant reduction in their viability, and are therefore amenable to long-term frozen storage such as at the MSB)

Germination testing: 87% germination was achieved with a pre-sowing treatment (seed scarified - chipped with scalpel) on a germination medium of 0.7% agar, at a temperature of 20°C, on a cycle of 12 hours daylight/12 hours darkness.

Acacia baileyana is one of the hardiest of acacias and can be grown in the open in the UK in sheltered places, although is not likely to survive periods of very severe frost.

Cootamundra wattle can be seen growing in the Temperate House at Kew. Samples of wood and bark from Acacia baileyana are held in the Economic Botany Collection in the Sir Joseph Banks Building and are available for study byresearchers by appointment.

Acacia baileyana (Cootamundra wattle) was one of 12 star plants featured in the Landscape, which took you on a journey across a whole continent, from eastern Australia's coastal habitat, through the arid red centre, to the western Australian granite outcrop featuring unique and highly endangered plants.

Distribution
Australia
Ecology
Open woodland, in stony, hilly country; on clay or clay loams derived from granites and porphyries (igneous rocks).
Conservation
Not evaluated according to IUCN Red List criteria, but not considered to be at risk in the wild.
Hazards 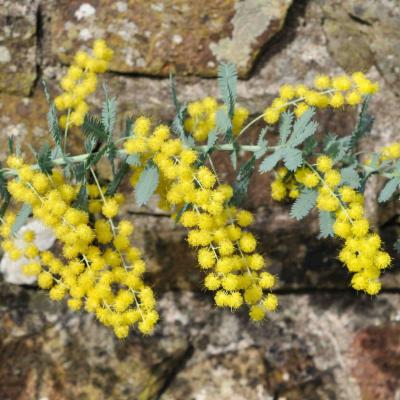 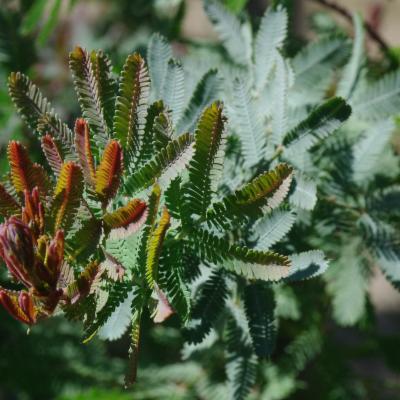 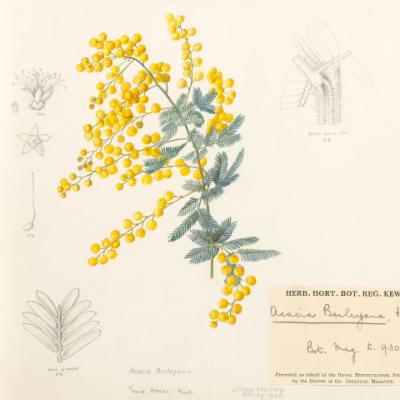 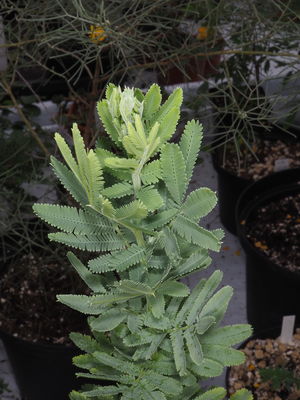 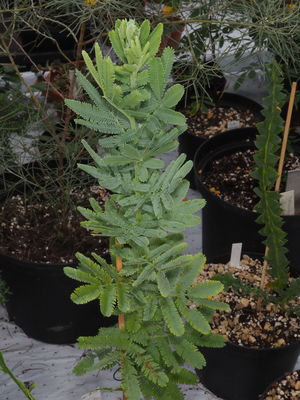 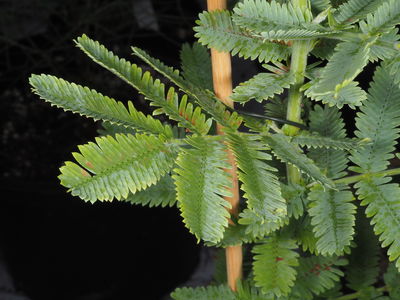 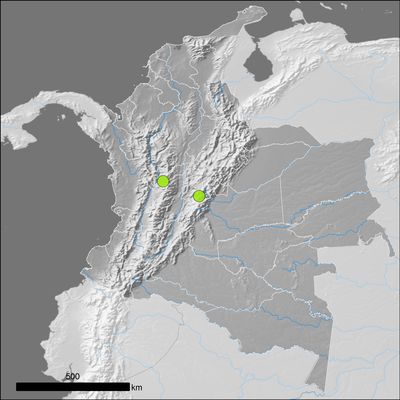