A member of the pea and bean family (Leguminosae/Fabaceae), Cicer arietinum is one of 43 species in the genus Cicer. Cicer is Latin for chickpea and is thought to be the origin of the surname Cicero (as in the Roman philosopher Marcus Tullius Cicero, 106-43 BC). 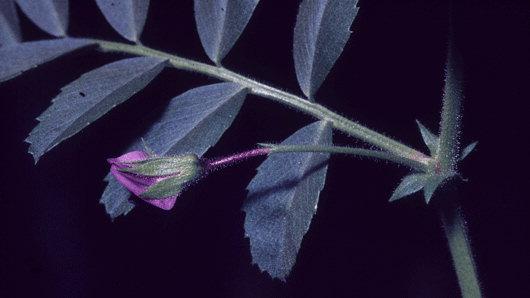 A member of the pea and bean family (Leguminosae/Fabaceae), Cicer arietinum is one of 43 species in the genus Cicer. Cicer is Latin for chickpea and is thought to be the origin of the surname Cicero (as in the Roman philosopher Marcus Tullius Cicero, 106-43 BC).

Chickpea is the third most important pulse in the world (after beans and peas). Its seeds have been eaten by humans since around 7,000 BC. It is widely cultivated for its nutritious seeds, which are harvested when immature and eaten raw, roasted, or boiled or when mature and dry processed into flour. Chickpea is a major protein source for poor communities in many parts of the semi-arid tropical areas of Africa and Asia.

Cicer arietinum is not known as a wild plant but is believed to have originated in the central part of the Fertile Crescent (in modern Turkey, Syria and Iran).

Evidence suggests that C. reticulatum (sometimes treated as C. arietinum subspecies reticulatum ) from southeastern Turkey might be the wild progenitor of the domesticated plant.

Chickpea is cultivated in tropical, subtropical and warm temperate zones, including the Mediterranean, the Canary Islands, western and central Asia and northeastern tropical Africa, including Madagascar. It is grown up to 2,500 m above sea level.

It is not suited to the humid and hot lowland tropics where it fails to flower.

Overview: A slender, erect annual growing up to 100 cm tall, with simple or branched stems.

Leaves: Divided into 5-7 pairs of leaflets. Leaflets up to 16 mm long and 14 mm wide with toothed margins and weak, spreading, glandular hairs. Triangular stipules (leaf-like appendages) are borne at the leaf base.

Fruits: A small, inflated and rounded pod, up to 3 cm long and 1.5 cm wide, with glandular hairs.

Seeds: Roughly spherical, with smooth or rough surface, up to 14 mm in diameter. Variable in colour, usually creamy-whitish when dried. One or two seeds per pod.

Many cultivars of chickpea have been described. There are two main groups in cultivation:

Desi (microsperma) cultivars - producing small, angular seeds with rough, yellow-brown coats. The desi forms predominate in the Indian subcontinent, Ethiopia, Mexico and Iran. They are often used for split peas (dahl) or flour after the hulls are removed.Kabuli (macrosperma) cultivars - producing relatively large, plump seeds with a smooth, cream-coloured coat. The kabuli forms predominate in Afghanistan through western Asia to North Africa and in southern Europe and America (excluding Mexico). They are usually sold whole. Threats and conservation

Many Cicer species from central Asia (most of which are perennial) are not yet represented in seed collections.

Chickpea is a major pulse crop with world production of well over 9 million tonnes. India is the world's main producer and consumer of chickpea. Other major producers include Turkey, Pakistan and Iran. It is also a significant export crop in Australia, New Zealand and Canada.

The earliest remains of chickpea seed have been found in Syria & Turkey and date back to around 7,000 BC. Chickpea was gradually introduced to the western Mediterranean region and Asia and had reached the Indian subcontinent by 2,000 BC.

Chickpea seeds are an excellent source of protein and contain a wide range of amino acids. They are high in fibre, low in fat and contain phosphorus, calcium and iron.

Immature seeds are consumed fresh, boiled or roasted and salted as snacks. Canned chickpea seeds are popular in the United States and Europe. In the Indian subcontinent, most chickpeas are processed into flour (Bengal gram, besan flour) for cooking bhajis, pakoras and breads. Chickpea flour can also be used to make gluten-free cakes.

Dhal is a dish made from split chickpeas with the seed coats removed. The seeds are often dried and then cooked to make a thick soup or ground into flour for snacks and sweetmeats.

Hummus is a dip or spread made using cooked and mashed chickpea seeds (mixed with tahini (sesame seed paste), olive oil, lemon juice, garlic and salt) and is a traditional dish in the Middle East, Turkey and North Africa.

Roasted chickpea roots have been used as a coffee substitute.

Chickpea plants are used as fodder in many developing countries. Seed husks and green or dried stems and leaves are used for stock feed, but they contain appreciable quantities of oxalic acid and are not good as forage. Whole seeds are sometimes milled for animal feed. Cicer hay has been reported as being toxic to horses.

Glandular secretions of the leaves, stems and pods of chickpea include malic and oxalic acids. These sour-tasting acid exudates can be applied medicinally or used as vinegar. In India these acids used to be harvested by spreading thin muslin over the crop during the night. In the morning the soaked cloth was wrung out and the liquid collected in bottles.

Chickpea acid exudates have been used to treat bronchitis, catarrh, cholera, constipation, diarrhoea, dyspepsia, flatulence, snakebite, sunstroke and warts. They have also been used as an aphrodisiac and to lower blood cholesterol levels. Germinated chickpea has been reported to be effective in controlling cholesterol level in rats.

In Chile, a cooked chickpea-milk mixture has been fed to infants, effectively controlling diarrhoea.Chickpea seeds are considered to be anti-bilious (to combat nausea, abdominal discomfort, headache, constipation and gas caused by an excessive secretion of bile).

Chickpeas can be used to make an adhesive that is suitable for plywood, although it is not water-resistant.

Chickpea is a major protein source for poor communities in many parts of the semi-arid tropical areas of Africa and Asia. Chickpea crops can be totally destroyed by insects and diseases. Their wild relatives, however, are often resistant to these pests and pathogens.

Kew scientists have identified compounds in these wild species that confer this resistance and therefore traditional breeding methods could use these as markers to help introduce resistance into commercial varieties.

Chickpea thrives in a sunny site in a cool, dry climate on well-drained soils. It is generally grown on heavy black or red soils with a pH of 5.5-8.6. Frost, hailstones and excessive rain can damage the crop. Some cultivars can tolerate temperatures as low as -9.5°C in the early stages or under snow cover.

The most important chickpea disease worldwide is ascochyta blight caused by the seed-borne fungus Ascochyta rabiei . Chickpea roots can be affected by the nematode worm Meloidogyne javanica (root-knot).

Pods can be damaged by moth larvae such as Helicoverpa armigera and the cutworm Agrotis ipsilon . Integrated pest management practices, including the selection of tolerant cultivars, pest population monitoring and the use of bio-pesticides and natural enemies, have been developed to reduce reliance on chemical insecticides.

Specimens of chickpea fruits and seeds, as well as necklaces made from strung chickpea seeds, are held in Kew's Economic Botany Collection, where they are available to researchers by appointment.

Use Animal Food
Used as animal food.
Use Gene Sources
Used as gene sources.
Use Food
Used for food.
Use Materials
Used as material.
Use Medicines
Medical uses. 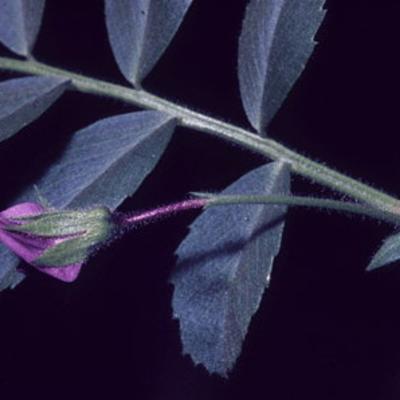 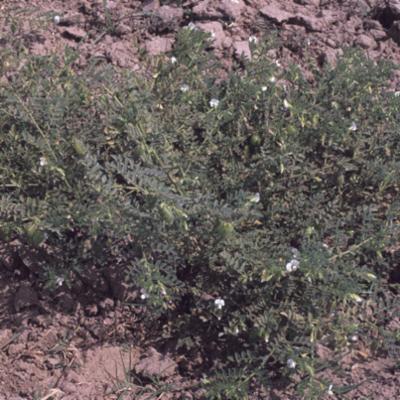 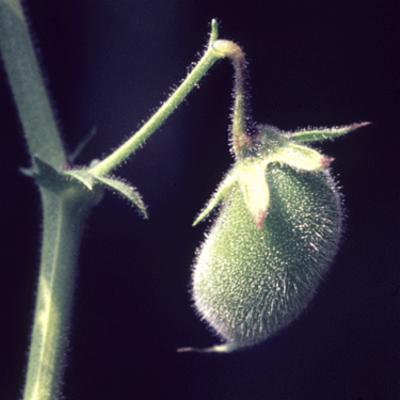 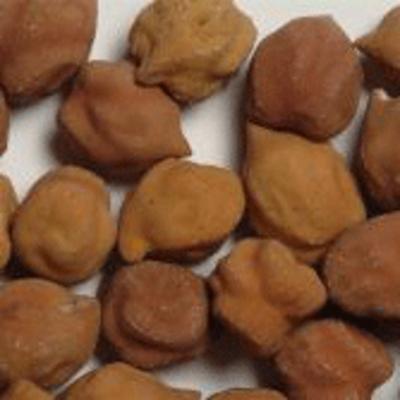 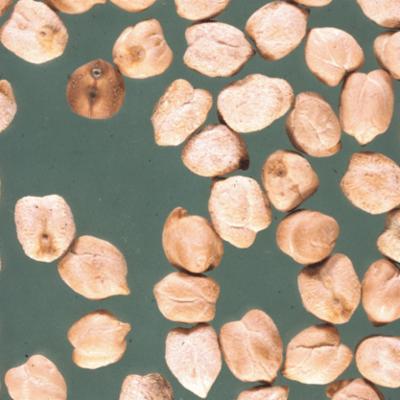 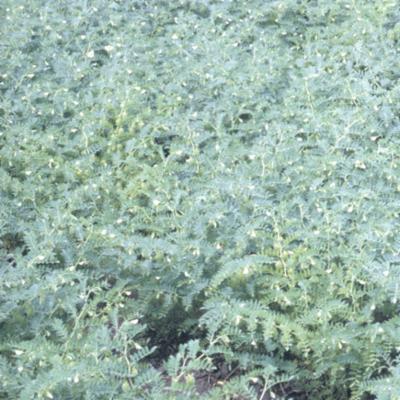 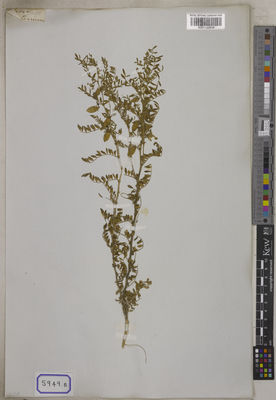 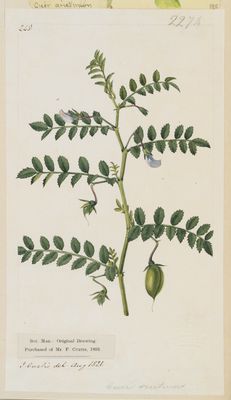 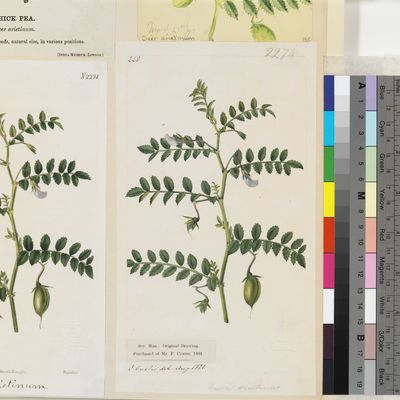 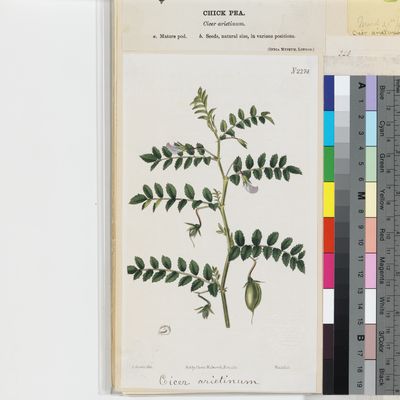