A member of the pea and bean family (Leguminosae/Fabaceae), Glycyrrhiza glabra is best known for its use in making liquorice-flavoured confectionery. Its scientific name is taken from the Greek for sweet root (glykys, meaning sweet, and rhiza, meaning root). It is cultivated for its rhizomes (underground stems) that contain the compound glycyrrhizin, which is 50 times sweeter than sugar. 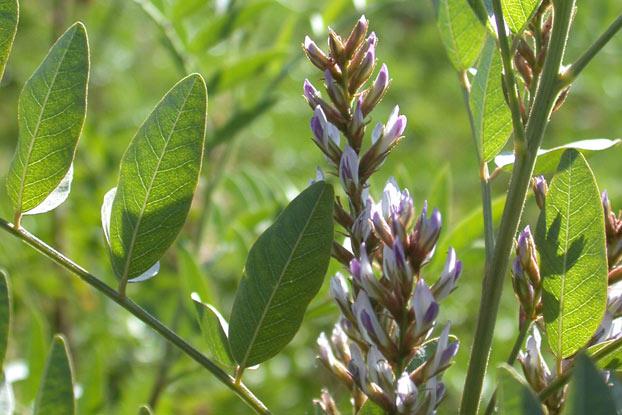 A member of the pea and bean family (Leguminosae/Fabaceae), Glycyrrhiza glabra is best known for its use in making liquorice-flavoured confectionery. Its scientific name is taken from the Greek for sweet root (glykys, meaning sweet, and rhiza, meaning root). It is cultivated for its rhizomes (underground stems) that contain the compound glycyrrhizin, which is 50 times sweeter than sugar.

Also well-known as a medicinal plant, G. glabra is used in the production of cough mixtures and throat lozenges, as well as an ingredient to mask the unpleasant taste of some medicines. There are about 20 species in the genus Glycyrrhiza, and many of these are used locally to make liquorice confectionery.

Used as an ingredient in cough mixtures and throat lozenges, Glycyrrhiza glabra has been used to treat sore throats, mouth ulcers, stomach ulcers, inflammatory stomach conditions and indigestion. It is also used to combat food poisoning in modern Chinese herbalism. Liquorice rhizomes can be chewed or made into tea, which with other anti-spasmodic herbs is often taken for menstrual cramps. Liquorice is also used as filler in capsules and added to medicines as a sweetener to mask the unpleasant taste of other ingredients

Glycyrrhiza glabra is native to Eurasia, northern Africa and western Asia, where it grows up to 1,200 m above sea level. It has also been introduced to many countries, for example the USA where it is a weed of moist roadside sites. Liquorice is also cultivated as a crop plant, particularly in Russia, Spain and the Middle East.

Overview: A sticky, perennial herb with underground stems (rhizomes). The hairy stems are upright, growing to about 1 m tall

Leaves: Divided into 9-17 leaflets, held on a leaf stalk 10-20 cm long. The leaflets are arranged in pairs along a central axis, with a single leaflet pointing outwards at the end. The leaflets are 2-4 cm long and bear dotted glands on the surface.

Flowers: Light blue to violet (rarely white), 1.0-1.5 cm long and resembling sweet pea flowers in shape. The flowers are held in loose, conical spires, almost as long as the leaves, each consisting of 10 or more individual flowers.

Widely distributed in Eurasia, Glycyrrhiza glabra is not considered to be threatened. Where it is cultivated as a crop, it is normally harvested in a sustainable manner, although there are some concerns that the commercial harvest of rhizomes can be destructive to naturally occurring populations and their habitats.

Glycyrrhiza glabra contains the compound glycyrrhizin, which is 50 times sweeter than sugar. It was well known by the ancient Greeks and Romans for its sweetness and is still a popular flavouring for confectionery today. Cultivated as a crop plant, the underground stems (rhizomes) of G. glabra are harvested and the juice extracted before being concentrated by boiling. The solid extract is used in confectionery, such as traditional liquorice sticks and wheels.

Pontefract cakes, or pomfrets, were originally made for their medicinal properties, but later became popular as confectionery; they were produced in Pontefract (Yorkshire, UK) from about 1660 to 1960. Anethole, a compound from the anise plant ( Pimpinella anisum ), is often used as flavouring for confectionery in place of, or in addition to, G. glabra extract.

Liquorice is used in the production of drinks, for example as an ingredient in many root beers, and some brewers use it to colour stout (a dark beer made using roasted malt or barley).

It is also used in plug tobacco (a form of chewing tobacco), shoe polish and soap and as a fibre for the production of plastics and fibreboard. Spent liquorice rhizomes (underground stems) are used in fire-extinguishing agents and as compost for growing mushrooms.

Six collections of Glycyrrhiza glabra seeds are held in Kew's Millennium Seed Bank based at Wakehurst in West Sussex.

Liquorice can be propagated by the division of rhizomes (underground stems) in early spring. Care should be taken to ensure each piece of rhizome contains a bud.

Propagation can also be carried out by sowing seed. Seeds should be pre-soaked in water and sown in the autumn in a greenhouse. In late spring, plants can be planted out in the open, but care should be taken to protect the new shoots from slugs. Alkaline, sandy but moist soil is preferable. Plant growth is initially slow, but once established the species can become weedy and difficult to remove if not kept under control by regular harvesting.

In commercial situations, the whole plant is dug up after three to five years to harvest the rhizomes, which are cleaned, trimmed, sorted and dried before being pressed into bales for shipping.

Specimens of liquorice roots and stems are held in Kew's Economic Botany Collection in the Sir Joseph Banks Building, where they are available to researchers by appointment.

Ecology
Dry, open scrubland, damp ditches or near streams; often in soils with high nitrogen content.
Conservation
Not assessed according to IUCN Red List criteria, but not considered to be threatened.
Hazards

It has been reported that excessive liquorice consumption can lead to cardiac dysfunction and severe hypertension. 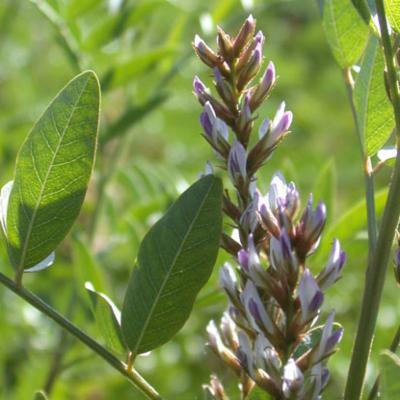 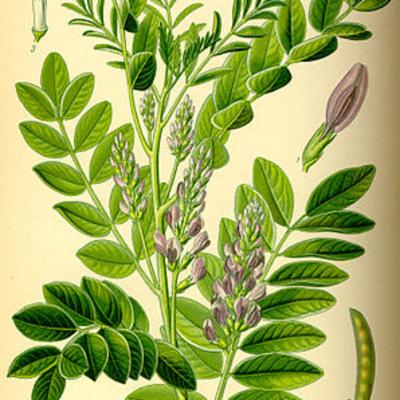 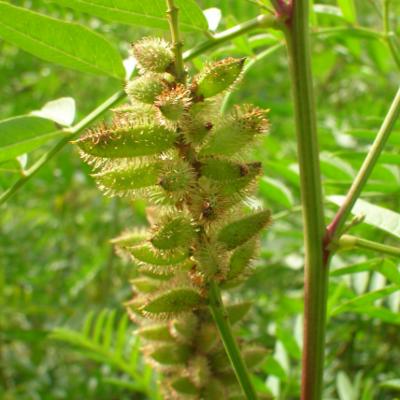 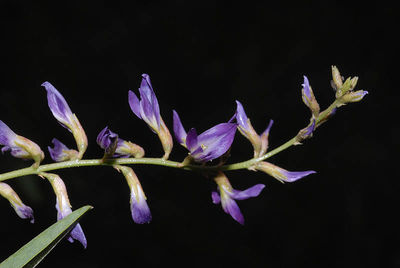 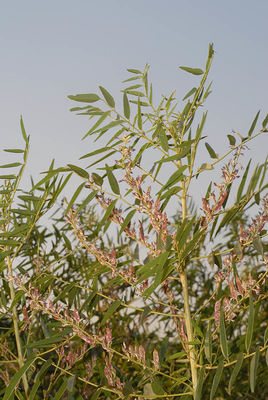 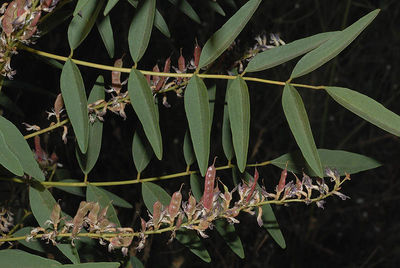 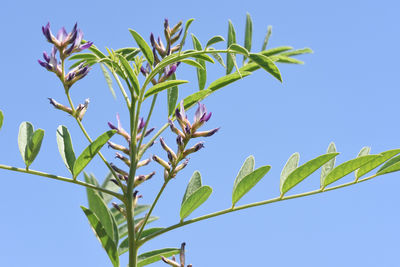 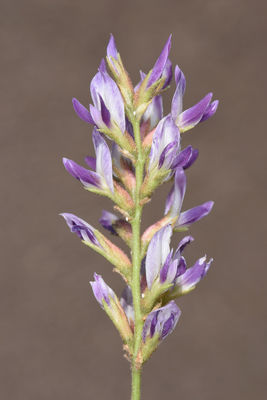 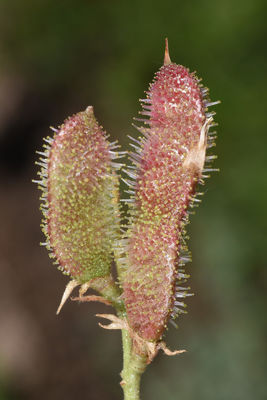 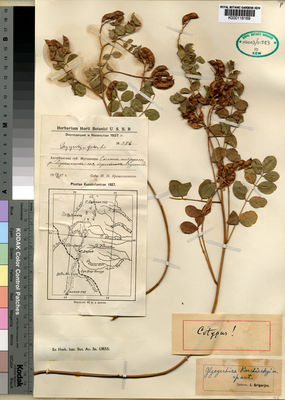 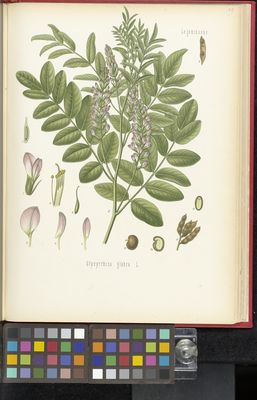 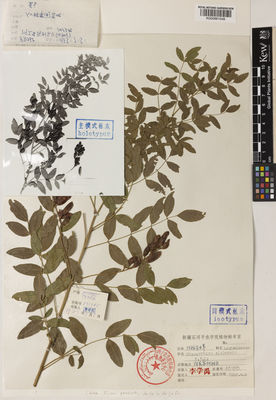