First published in Fl. Seneg. Tent.: 228 (1832)
This species is accepted
The native range of this species is Tropical & S. Africa. It is a shrub or tree and grows primarily in the seasonally dry tropical biome. 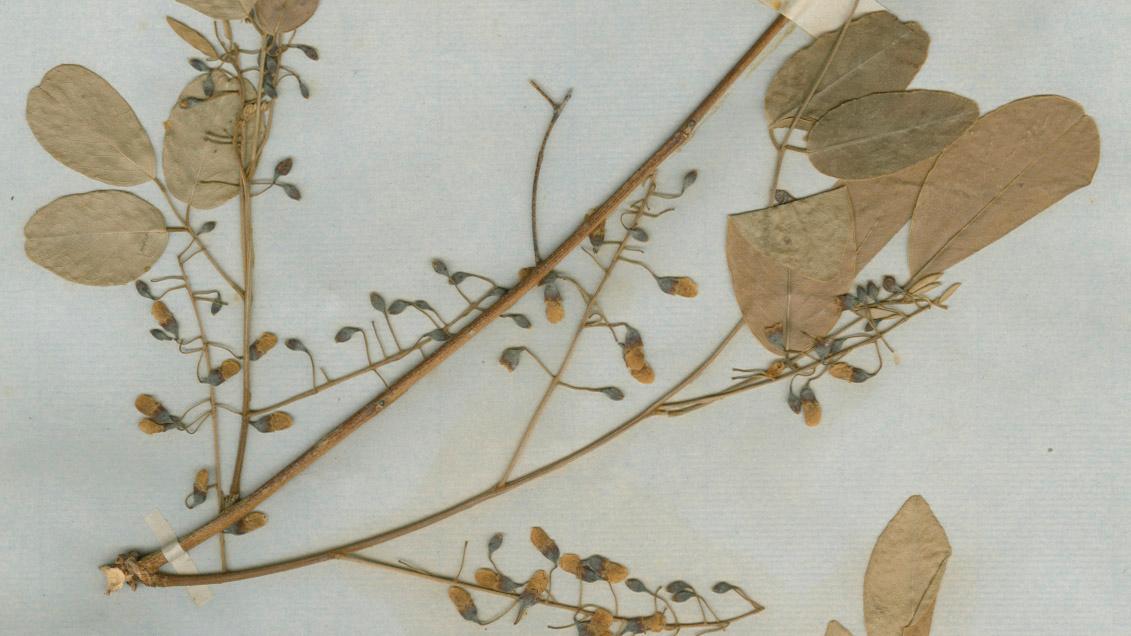 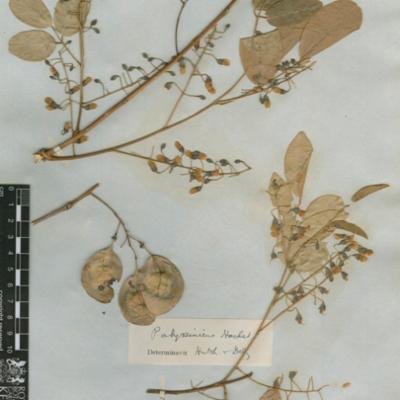 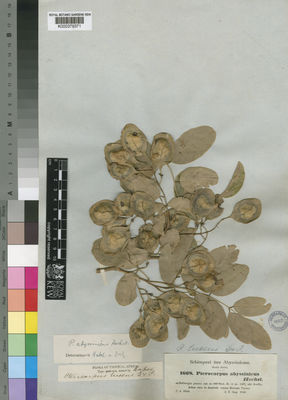 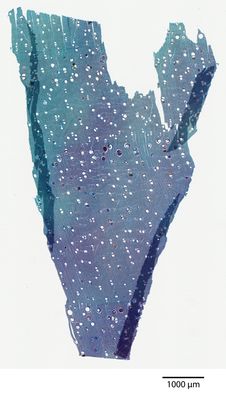 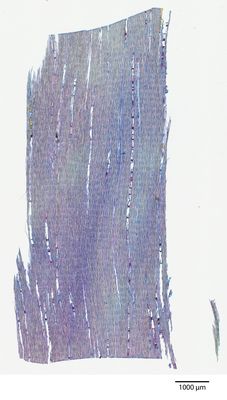 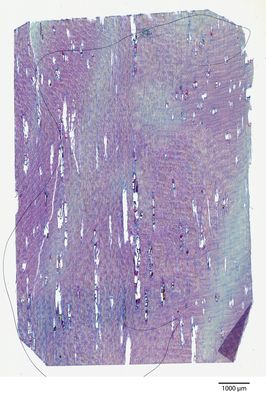 General Description
Small-leaved bloodwood is an African shrub or tree with many uses, and is considered threatened in northern Burkina Faso.

The generic name Pterocarpus comes from the Greek for 'winged fruit' and refers to the shape of the circular, winged, single-seeded fruits which are characteristic of most Pterocarpus species. The specific epithet lucens comes from the Latin for 'shining light', and it probably refers to the bright yellow appearance of these trees when seen from a distance in the flowering season.

Small-leaved bloodwood belongs to the pea and bean family (Leguminosae) and is found extensively throughout the semi-arid regions of tropical Africa. It provides a beautiful yellow, sweetly-scented display when flowering in the dry season, just before leaf-set or whilst bearing young leaves. Flowering often lasts only a few days and typically occurs in November and December. The fruits normally develop between January and May. The wind-dispersed, winged fruits remain on the tree for a long time after maturity.

Widely distributed in dry, tropical Africa from the Sahel (Senegal and Mali, to Nigeria and Cameroon) in the west to Sudan, Ethiopia and Uganda in eastern Africa, and, after a gap, again in southern Angola, Namibia and Mozambique.

It is found growing from 550-1,520 m above sea level. It sometimes forms thickets and can form pure stands of tall trees in lowland sites on well-drained, deep, sandy soils. At higher elevations, or on stony, rocky or lateritic soils, it grows as a low, branching shrub.

Overview:  Pterocarpus lucens varies from being a low-branching, deciduous shrub, to a full tree up to 18 m tall, with a trunk diameter up to 80 cm. The bark is dark grey-brown and fissured or flaky, and exudes a red, sticky resin when cut.

Leaves:  The leaves are compound, 10-28 cm long, with up to 11 (usually five or seven) leaflets. The leaflets are orbicular, elliptic or ovate, 3-8 cm long and 1.5-5 cm wide. The leaflets are fresh grassy green, glossy above, but much paler (and with a covering of fine hairs) below. The stipules (appendages at the base of leaf stalks) are linear, 2-3 mm long and fall off early. The spindly, hairless petiole (leaf stalk) is 10-20 cm long.

Flowers:  The inflorescences are produced on leafy branches and are composed of light yellow, sweetly-scented flowers on long stalks (8-15 mm). The flowers are the shape of pea-flowers, with a five-toothed calyx (4-8 mm long) and a corolla (10-15 mm long) with five crinkly petals.

Fruits:  The ovate, flattened fruits are pale creamy-brown with a wing surrounding the seed chamber, which holds one, rarely two seeds. The fruits are 4.5-6.5 cm long and 2-3 cm wide, including the wing. The central, seed-bearing portion has a hard, thick wall that protects the seeds from desiccation. The fruits remain attached to the tree for a long time.

Pterocarpus lucens is, like all other Pterocarpus species, pollinated by bees, which are attracted by the yellow display of sweetly-scented flowers. The flattened, winged, one-seeded fruits are an adaptation to wind dispersal in the rainy season.

A recent Kew study by Saslis-Lagoudakis and collaborators, examined the relationship between the two subspecies and confirmed classification.

Pterocarpus lucens was recently included in a molecular study of the evolutionary relationships between all known Pterocarpus species. The research, by Saslis-Lagoudakis and collaborators, showed P. lucens to be most closely related to P. brenanii and P. rotundifolius , which are both southern African species.

Pterocarpus lucens was recently assessed as of Least Concern (LC) on a global basis, according to IUCN Red List criteria. Yet, it is considered by some to be seriously threatened locally, for example in northern Burkina Faso. Small-leaved bloodwood is widely used for timber, and parts are also removed for medicinal and edible purposes. It is not thought to regenerate well.

Locally, there is high pressure on populations of P. lucens because of the popularity of its wood for house construction, increasing demand for fuelwood and frequent harvesting of the leaves for fodder. Prolonged dry seasons can lead to trees dying as they have a relatively poorly-developed root system that is often damaged by termites, and also because they are often weakened by regular harvesting of leaves for fodder.

Some conservation measures are in place. Small-leaved bloodwood is known to occur within the protected areas network, and seeds have been collected by the Millennium Seed Bank Partnership as a method of ex-situ conservation. It has been recommended that a monitoring program is put into place to ensure that Pterocarpus lucens does not suffer a population decline due to over-exploitation.

Conservation assessments carried out by Kew

Pterocarpus lucens is being monitored as part of the 'Sampled Red List Index Project', which aims to produce conservation assessments for a representative sample of the world's plant species. This information will then be used to monitor trends in extinction risk and help focus conservation efforts where they are needed most.

The whitish timber of small-leaved bloodwood is medium-hard and easy to work. It is used locally for joinery, flooring, furniture, shipbuilding, vehicle bodies and railway sleepers, for example. It is also used as firewood as it gives a hot flame and produces little smoke.

The resinous bark is used for tanning leather, and also medicinally in the treatment of dysentery and as a powerful astringent. The roots, leaves and bark are also variously used to treat headaches, diarrhoea and tapeworms, and the leaves are used to heal wounds.

The leaves and fruits are harvested and sold as animal fodder, and cooked young leaves are eaten as a vegetable, serving as an appetiser.

Seed storage behaviour: Orthodox (the seeds of this plant survive drying without significant reduction in their viability, and are therefore amenable to long-term frozen storage such as at the MSB)

Germination testing: 100% germination was achieved with a pre-sowing treatment (seed scarified = chipped with scalpel), on a 1% agar medium, at a temperature of 26°C, and a cycle of 12 hours daylight/12 hours darkness.

Pressed and dried specimens of Pterocarpus lucens are held in Kew's Herbarium, where they are available to researchers from around the world, by appointment. The details, including images, of some of these specimens can be seen online in the Herbarium Catalogue.

Specimens of bark and gum from P. lucens are held in Kew's Economic Botany Collection.