First published in N.L.Britton & P.Wilson, Sci. Surv. Porto Rico & Virgin Islands 6: 538 (1930)
This species is accepted
The native range of this species is Tropical & S. Africa to India. It is a shrub or tree and grows primarily in the desert or dry shrubland biome. 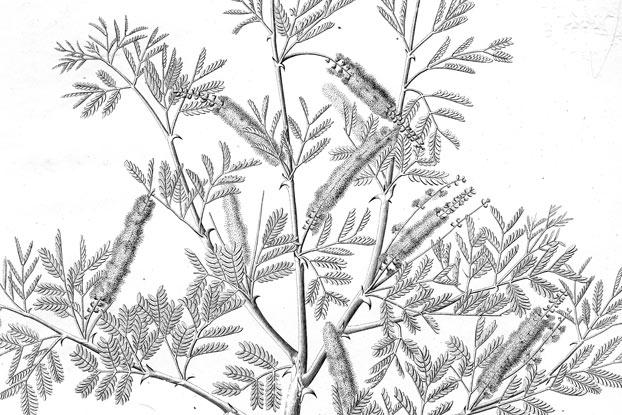 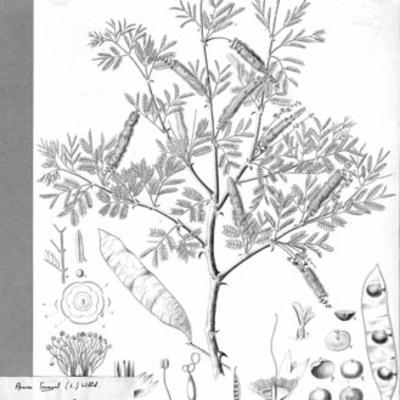 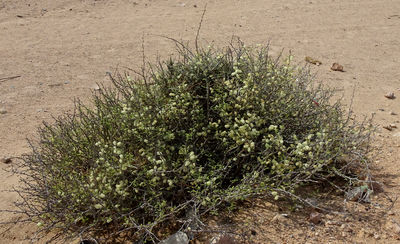 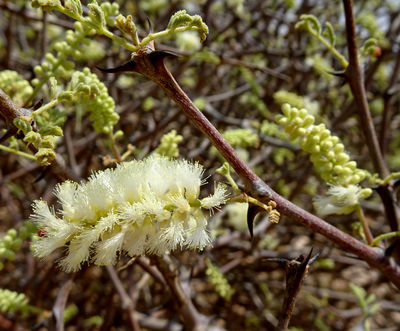 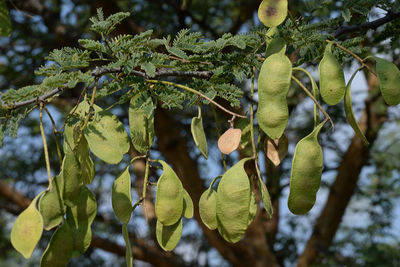 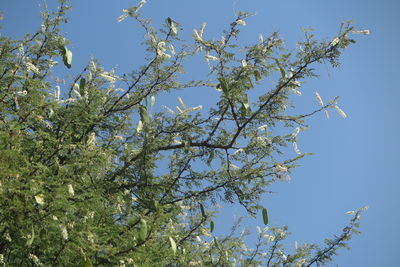 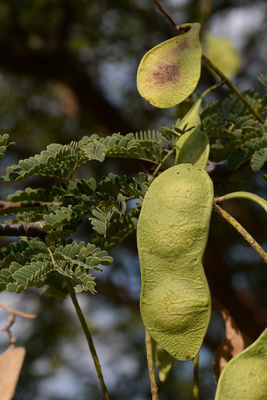 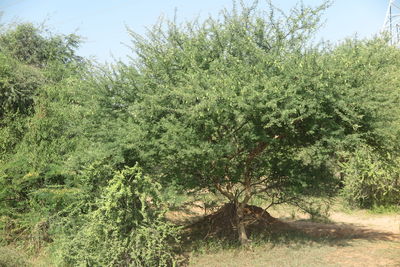 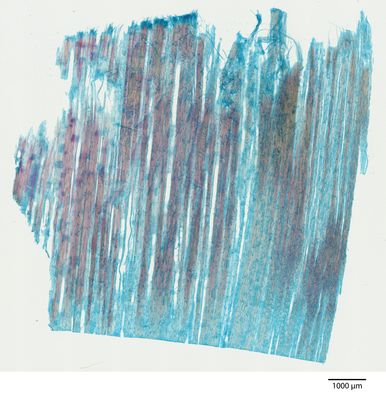 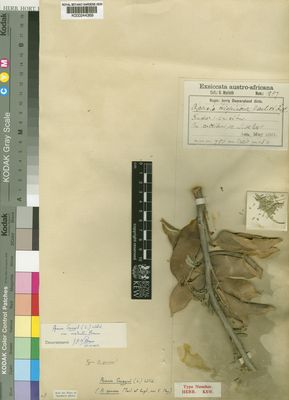 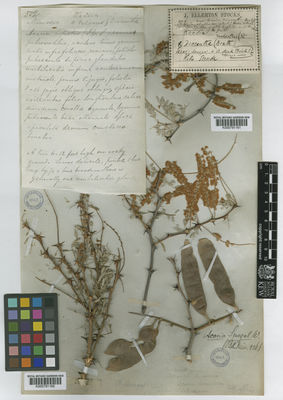 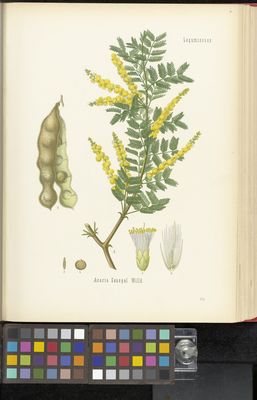 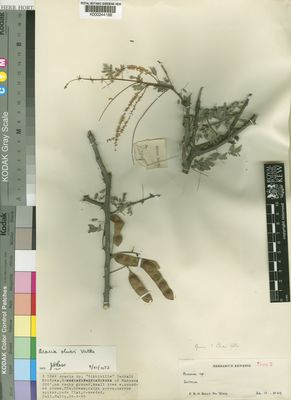 General Description
Gum arabic has been used for at least 4,000 years in the preparation of food, in human and veterinary medicine, in crafts and as a cosmetic.

Harvested from Senegalia senegal, gum arabic has superior properties over other 'acacias', and hence it is this gum that has dominated international trade. Currently the biggest markets for Senegalia senegal gum are the European Union, North America (mainly the USA) and the Indian Subcontinent (mainly India). The UK imported 1,253 tonnes in 1998. Sudan, Nigeria and Chad are the three biggest sources of this gum.

Gum arabic is traded in large quantities, and is grouped into three grades. Grade 1 (the best) is in large, round or worm-shaped pieces and is white/pale or brownish yellow. Grade 2 gum is in rounded, worm-shaped or branched pieces, and is smaller in size and generally darker in colour than the top quality. The poorest grade gum (Grade 3) is in the form of small brown grains.

This species can grow on light sandy soil, slightly loamy sand and skeletal soils (lithosols) but it prefers coarse-texture soils such as fossil dunes, with a 300 to 400 (maximum 700) mm annual rainfall. It can also grow in areas that receive 100 to 950 mm annual rainfall, but these extremes reduce the production of gum. It can tolerate five to eleven months of drought. It can survive temperatures of 45˚C, dry wind and sandstorms, but cannot withstand frost. The best sites for the species have a pH of 5 to 8. The altitude ranges from 100 to 1,700 m above sea level in the Sudan to 1,950 m around Nakuru in Kenya.

Overview: A low branching shrub or small tree to 7 m high (maximum 15 m). The tree flowers during the rainy season and loses its leaves during the dry season. When water is only available at great depth, deeply penetrating tap roots can develop, and the tree will grow considerably larger than normal.

The bark of Acacia senegal is yellow to brown and smooth in young trees, becoming dark grey, gnarled and cracked on older trees. It is armed with recurved prickles just below the nodes, in pairs or in groups of three.

Flowers: The flowers are borne on spikes 3 to 8.5 cm long.

There are four varieties of A. senegal . These differ in the presence or absence of hair on the axis of the flower spike, colour of the axis, shape of pod tips, number of pinnae pairs, trunk branched or not branched from the base and shape of the crown, as well as their geographical distribution.

The germination of seed is slow and young plants usually have to contend with competition from grass and browsing stock. Those which survive will begin to yield gum at three to four years of age. The best yields in West Africa come from trees 12 to 15 years old and up to 20 cm diameter. In Kordofan trees aged four years are opened for tapping, which continues to the age of 20 or older, but elsewhere in Sudan six to 18 years is usual. The best yields come from trees in areas with an annual rainfall of only 250 to 300 mm. Trees die at an age of 25 to 30 years, by which time they will have succumbed to borers and termites.

Other than in the case of Sudan, where pressure for cultivated land, droughts and fuelwood collecting is a threat, Acacia senegal is generally well managed as its cultivation is very important. There are a number of pests that may damage it however. The buffalo treehopper ( Stictocephala bubalus ) may destroy seed crops. Spiders ( Cyclops sp.) can smother young growing tips. The larval stages of beetles ( Coleoptera - bruchids), moths and butterflies, and bees and wasps ( Hymenoptera ) can damage the seeds. Locusts ( Acridium melanorhodon ) can defoliate vast areas overnight.

Locusts and browsing goats and camels are major enemies. Herdsmen lopping off branches to make cattle enclosures can also be a threat

The use of gum arabic (or gum acacia), which is derived from an exudate from the bark, dates from the first Egyptian Dynasty (3400 B.C.). It was used in the production of ink, which was made from a mix of carbon, gum and water. Inscriptions from the 18th Dynasty refer to gum as 'komi' or 'komme'. Gum arabic has been used for at least 4,000 years by local people for the preparation of food, in human and veterinary medicine, in crafts, and as a cosmetic. Acacia senegal produces the only acacia gum evaluated toxicologically as a safe food additive.

Nowadays the gum is present in a wide range of everyday products. 60-75% of the world production of gum arabic is used in the food industry and in human and animal medicine.

In the food industry gum arabic is used as a flavour fixative and emulsifier, to prevent crystallisation of sugar in confectionery, as a stabiliser in frozen dairy products, for its viscosity and adhesive properties in bakery products, and as a foam stabiliser and clouding agent in beer.

The dried and preserved seeds of  A. senegal  are used as vegetables. The leaves and pods are browsed by sheep, goats, camels, impala and giraffe. The seeds are sometimes eaten as a vegetable in India.

The flowers are a good source of honey, an important source of nutrition and income generation to support rural livelihoods in marginal lands.

In pharmaceuticals, it is used as a stabiliser for emulsions, a binder and coating for tablets, and as an ingredient in cough drops and syrups. A soothing and softening agent, gum arabic is extensively employed in folk medicines. Among many other uses, it is used internally for coughs, diarrhoea, dysentery, haemorrhage, and externally to cover inflamed areas.

Gum arabic is used in cosmetics as an adhesive for face masks and powders, and to give a smooth feel to lotions.

Acacia senegal wood is locally valued for fuel wood and charcoal, although biomass yield per unit of land area is not sufficient to plant it for this.

Industrially, gum arabic is applied as an adhesive, as a protective colloid and safeguarding agent for inks, sensitiser for lithographic plates, coating for special papers, sizing agent for cloth to give body to certain fabrics, and coating to prevent metal corrosion. Gum arabic is also used in the manufacture of matches and ceramic pottery.

In construction the wood is used locally for poles and fence-posts, the light-coloured wood for tool handles and dark heartwood for weaver's shuttles. Strong ropes are made from the bark fibres of the long surface roots. Where the trees are large (for example near the River Niger) they are cut into planks at least 12 cm thick for making canoes for hunting hippopotamuses. The wood is hard and heavy and takes a beautiful polish, with the sapwood being yellowish white and the heartwood nearly black and irregular. The wood is made into throwing-sticks which, in contrast to the Australian boomerang, can be made to fly straight and used for hunting and pageantry.

Acacia senegal can help prevent desertification, through sand dune stabilisation and by acting as a wind break.

A collection of Acacia senegal seeds is held in Kew's Millennium Seed Bank based at Wakehurst in West Sussex.

Gum arabic reaches 4 to 7 m tall with a taproot up to 30 m in depth. It grows on sandy soils and requires strong light. It is drought and heat resistant, but sensitive to waterlogging. The tree is able to fix nitrogen from the air.

When propagating this species by seed it is important to note that the seeds are hard coated and must be scarified (subjected to mechanical abrasion or hot water treatment) before sowing.

In agroforestry the seed should be harvested before pods have dried for easy collection and to avoid insect attack. Seed is easily extracted by hand. Freshly extracted seed should immediately be dusted with an insecticide. Seed will remain viable for three to four years if kept in opaque, airtight containers. There are 10,000 to 30,000 seeds per kg. Fresh seed requires no pre-treatment if sown immediately after harvest. Seed collected in previous seasons, however, requires pre-treatment to break seed dormancy. Soaking seed in water for 12 to 24 hours gives good results and is simple to apply. Seeds can also be nicked (a small cut made into them).

Acacia senegal is raised in plant nurseries in polyethylene pots, two to four seeds per pot, thinned to one seedling after four to six weeks. Direct seeding (five to eight seeds in 30 x 30 x 30 cm pits or larger) can also be used. Strict protection from fire and livestock grazing, and efficient control of weed competition during at least the first two years is important for seedling survival. Minimum spacing for block planting is 4 x 4 m. At 10 x 10 m spacing, agricultural intercropping is possible, for example, inter-planting with millet, beans, or groundnuts.

When trees are near well watered locations, they grow taller but they do not produce any gum. The tree has to be under stress, diseased, ill-nourished and cut off from water before it will produce gum.

None. Senegalia senegal produces the only acacia gum evaluated toxicologically as a safe food additive.