Vicia faba, commonly known as faba bean or broad bean, is widely cultivated for its nutritious seeds and pods which are consumed by millions of people throughout the world. It belongs to the legume family, Leguminosae (also known as Fabaceae) and like many legumes it is high in protein due to its ability to fix nitrogen from the air through a symbiotic relationship with bacteria housed in root nodules. 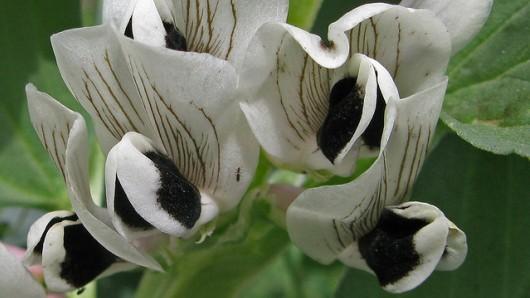 Vicia faba, commonly known as faba bean or broad bean, is widely cultivated for its nutritious seeds and pods which are consumed by millions of people throughout the world. It belongs to the legume family, Leguminosae (also known as Fabaceae) and like many legumes it is high in protein due to its ability to fix nitrogen from the air through a symbiotic relationship with bacteria housed in root nodules.

Faba bean is an ancient crop which is thought to have originated in Western Asia as early as 7,000 - 4,000 BC. From there it was spread by humans to Europe, Africa and central Asia.

Today, faba bean is only known in cultivation and is grown in temperate and subtropical regions of the world and at higher altitudes in the tropics.

Overview: Vicia faba is an erect, robust annual herb growing up to 2 metres tall. It has a stout, square stem, which is hollow and has additional basal branches. The plant has a well-developed  taproot with strong lateral roots.

Leaves: The leaves are arranged alternately along the stem; each leaf is paripinnate (terminating in a leaflet pair), composed of 2-6 leaflets. Faba bean has conspicuous stipules (appendages at the base of the leaf) which are toothed at the margins and vary widely in shape. The leaflets are ovate to elliptical and are up to 10 x 4 cm in size.

Flowers: The stalked flowers are arranged on an unbranched axis (a raceme). The racemes are short, 1-6 flowered and axillary (arising from the point between the main stem and a leaf). The flowers are fragrant, the petals white, the outermost petal (the standard) marked with a central, basal, dark brown or black blotch, and are papilionaceous resembling, for example, the pea ( Pisum sativum ) flower. Each flower has 10 stamens, nine of which are fused into a partial tube, with the tenth stamen free. The ovary is positioned above the sepals, petals and stamens. The style is approximately 3mm long and is abruptly upturned, with a tuft of hairs near the stigma.

Fruit : The fruit is a narrowly oblong, cylindrical to a laterally flattened pod up to 30 cm long containing up to 6 seeds. The seeds are 1-3 cm in diameter and are ovoid to oblong in shape and compressed. The colours of the seeds range from brown to reddish or green.

Faba bean is widely grown for its nutritious seeds and pods which are consumed by millions of people throughout the world.

The dry, mature seeds are popular in dishes throughout the Middle East, Mediterranean countries, China and Ethiopia and in many other countries the green immature seeds and pods are eaten as a vegetable.

In countries such as Ethiopia and Eritrea the hulled seeds are ground and made into a sauce (a dish called 'shiro wot') or spiced and minced with butter to make 'ful'. The fresh green seeds, either raw or roasted make a delicious snack, popular in many African countries. 'Ful medames' is a breakfast dish, common in the Arab world, which is made from faba bean seeds which are minced and cooked with onion, garlic and herbs. Some people make a paste from the seeds and use it as a sandwich filling. In India the roasted seeds are eaten like peanuts.

As well as being an important food source for humans, the high protein content of faba bean means that it is used in animal feed for pigs, horses, poultry and pigeons.

In some places faba straw is used to make bricks and in Ethiopia and Sudan used as fuel for cooking.

Faba bean can be grown as a cold season cover crop to prevent erosion and to fortify the soil with nitrogen, and in China the stems and leaves are used as green manure.

Faba bean has a number of medicinal uses, especially in traditional Chinese medicine and it is said to be used as a diuretic, expectorant and tonic. In Europe, the green pods of faba bean can be rubbed onto warts to remove them.

The Millennium Seed Bank and the Global Crop Diversity Trust are engaged in a ten-year project, called 'Adapting Agriculture to Climate Change'. The project aims to protect, collect and prepare the wild relatives of 29 key food crops, including faba bean, so that they are available to pre-breeders for the development of new varieties that are more resilient to the effects of climate change.

Seed storage behaviour: Orthodox (the seeds of this plant can be dried to a low moisture content without significantly reducing their viability. This means they are suitable for long-term frozen storage such as at the MSB)

Ecology
Faba bean prefers cooler temperatures. It grows best in well-drained soils with a neutral pH of around 6.5-7.5 and is fairly intolerant to waterlogging or drought.
Conservation
Not threatened due to its wide cultivation.
Hazards

Inhalation of the pollen or ingestion of the seeds may cause favism. This only occurs in cases of excessive consumption of the raw seed and when the person has a genetic disposition towards the disease.

Use
Food and Drink, Forage 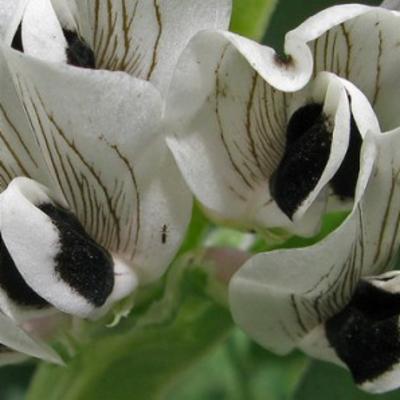 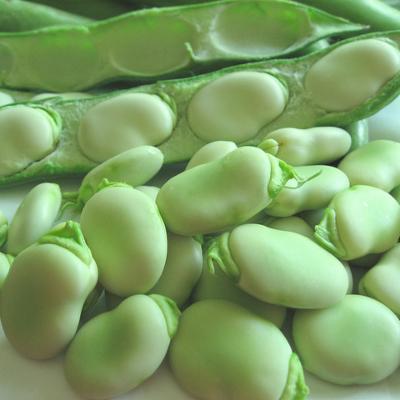 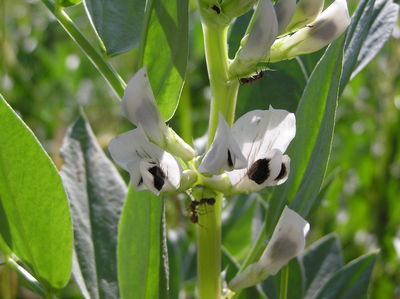 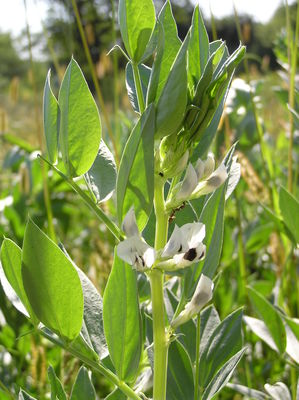 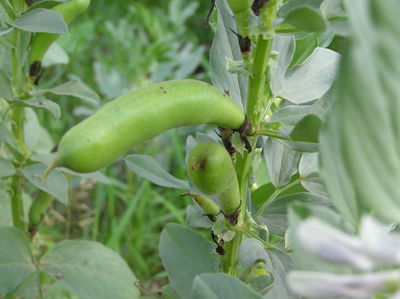 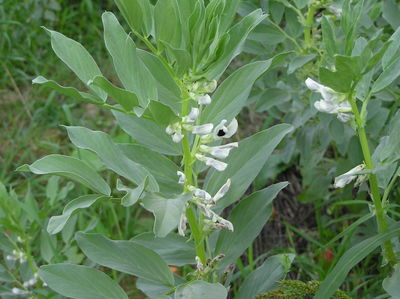 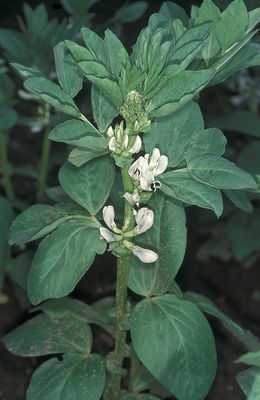 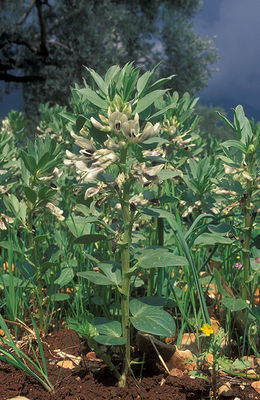 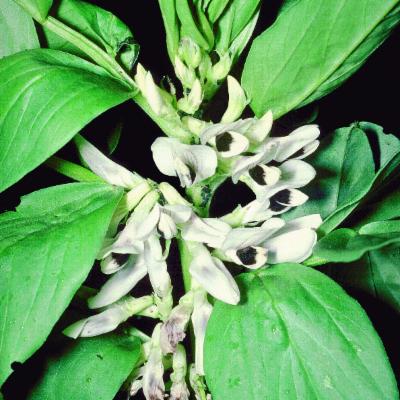 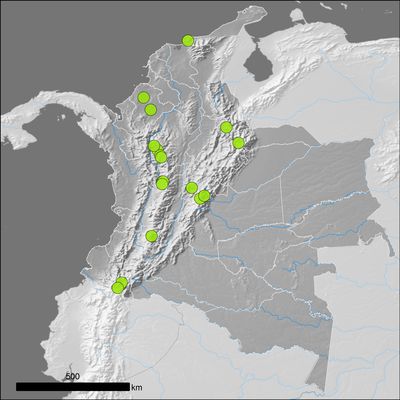 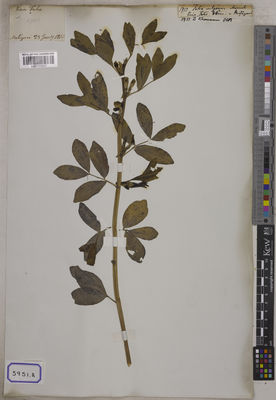