Kniphofia caulescens occurs in marshes on high-altitude mountain slopes in South Africa. The flowers are pollinated by birds. 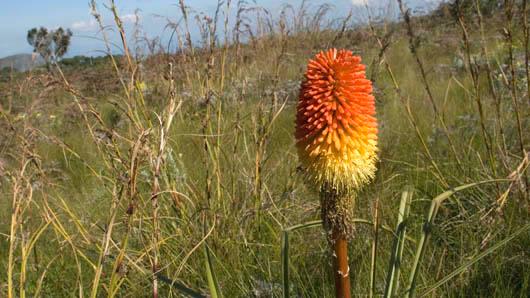 General Description
In the uplands of South Africa, the brightly-coloured flower spikes of the Lesotho red hot poker can be seen from a distance.

Kniphofia caulescens occurs in marshes on high-altitude mountain slopes in South Africa. The flowers are pollinated by birds.

Lesotho red hot poker is restricted to South Africa and Lesotho. It is also found elsewhere in cultivation.

Overview: Kniphofia caulescens usually has several stems and grows to about 60 cm tall. Each stem has a crown of narrow, grey-green leaves.

Leaves: Each leaf is v-shaped in cross-section, with fine teeth along its edge, and can be up to 70 cm long.

Flowers: The flower spike usually rises above the leaves. The tubular flowers are densely clustered at the top of the spike and are initially red before fading to yellow. The lower flowers change to yellow first, resulting in the characteristic bicoloured flower spike with red flowers at the top and yellow ones below. The flowers are about 2 cm long and when they open, the stamens protrude from them.

This species forms very localised populations, which places it at greater risk from habitat destruction than species that form extensive ones.

Lesotho red hot poker has been considered by the Basutos to be a charm against lightning, and hence in the past was cultivated near their huts.

Lesotho red hot poker is grown as part of the Living Collection at both Kew Gardens and Wakehurst.

Dried and alcohol-preserved specimens are held in the Herbarium, one of the behind-the-scenes areas of Kew. Details of some specimens of Lesotho red hot poker can be seen in the online Herbarium Catalogue.

Between April and October 2010, Kew and the British Museum brought a small corner of South Africa to the heart of London. The South Africa Landscape celebrated a shared vision to strengthen cultural understanding and support biodiversity conservation across the world.

Kniphofia caulescens (Lesotho red hot poker) was one of the star plants featured in the Landscape.

Use
Local charm against lightening, ornamental. 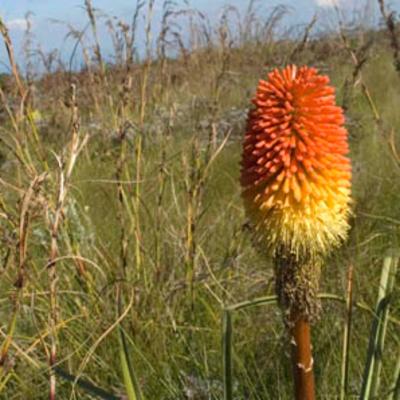 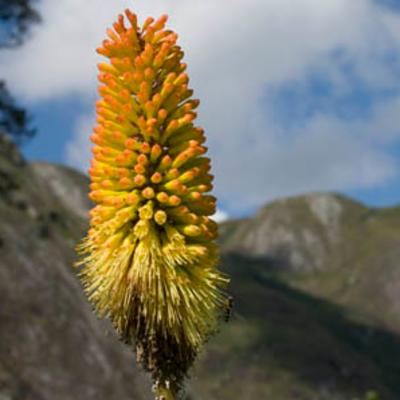 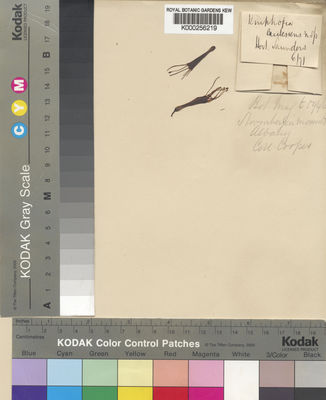 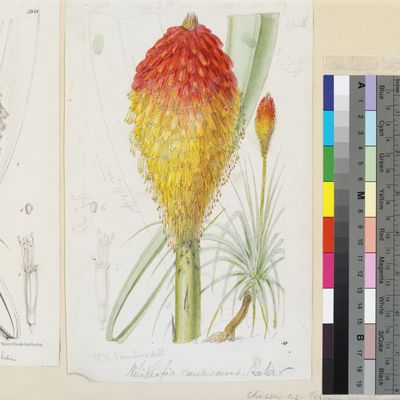 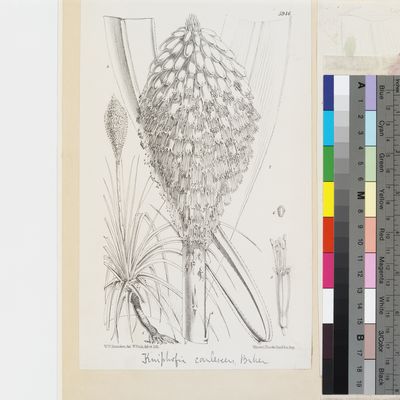