Thunbergia laurifolia is a vigorous climber from Asia. The generic name Thunbergia commemorates Swedish physician and botanist Carl Peter Thunberg (1743-1828), who was a protégé of the great Swedish naturalist Carl Linnaeus. The specific epithet laurifolia refers to its laurel-shaped leaves. 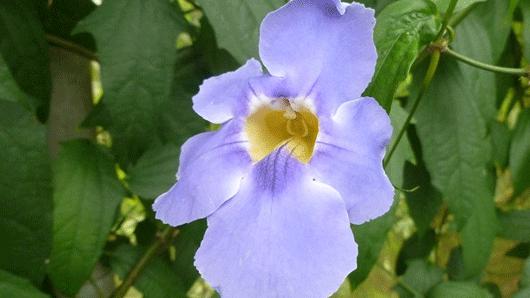 Thunbergia laurifolia is a vigorous climber from Asia. The generic name Thunbergia commemorates Swedish physician and botanist Carl Peter Thunberg (1743-1828), who was a protégé of the great Swedish naturalist Carl Linnaeus. The specific epithet laurifolia refers to its laurel-shaped leaves.

It is cultivated as an ornamental in gardens in tropical regions and in heated glasshouses in temperate regions. It is used medicinally in Thailand and Malaysia, although it is considered an invasive in other tropical regions.

Thunbergia laurifolia leaves are reported to have detoxifying effects, and in Thailand they are used as an antidote for poisons and in the treatment of drug addiction. Herbal teas and capsules containing T. laurifolia are sold in Thailand, where they are known as rang jeud.

A Thai study published in 2012 suggested that laurel clock vine has antioxidant and anti-inflammatory properties. It concluded that it may be effective in treating inflammations caused by Opisthorchis viverrinia (southeast Asian liver fluke), a parasite that attacks the liver and is endemic in northern areas of Thailand, Vietnam, Cambodia and Laos.

Thunbergia laurifolia is native to India, Burma and Malaysia. It grows in moist areas at low elevations and requires a frost-free environment.

It has been introduced to many tropical regions as an ornamental, but in countries such as Australia it is now considered an invasive weed (along with its close relative Thunbergia grandiflora ). It smothers native vegetation and is therefore considered a threat to Australia's biodiversity in several areas including remnant tropical rainforests across northern Australia.

Overview: A vigorous, hairless, woody vine with tuberous roots, climbing by twining stems and reaching a length of 12 m or more in one season.

Leaves: In opposite pairs. Hairless, usually two to four times as long as they are wide. Lower half of the leaf sometimes irregularly lobed.

Flowers: Petals joined at base to form a short, broad tube with a yellowish throat, opening out into five rounded, lavender to blue (occasionally white in the wild) petals. Calyx (whorl of sepals) with glands at the edge only.

Flowers are borne on hanging racemes (bearing four or more individual flowers) that can grow up to 1.8 m long.

Laurel clock vine is similar in appearance to Thunbergia grandiflora , but has longer, thinner leaves; its young stems and leaves are hairless.

Laurel clock vine is a popular ornamental in the tropics, where it is grown for its attractive flowers and foliage.

In Thailand and Malaysia, the leaves are dried and crushed and drunk as a tea.

In tropical regions, laurel clock vine can be cultivated outdoors and is often grown on a trellis as a screen or over a pergola. This vigorous climber requires hard pruning each year to contain it. A slightly acidic soil is required, which should be fertile and freely draining.

In temperate climates, laurel clock vine should be grown in a heated glasshouse because it is frost-tender. When cultivated in this way, it enjoys a long and prolific flowering period (Kew's glasshouse specimens flower from March to November). Although still a vigorous climber in a glasshouse environment, its maximum size is significantly less than when it grows in the wild.

It can be propagated by seed or by using stem or root cuttings.

Laurel clock vine can be seen in the tropical section (zone 1) of Kew's Princess of Wales Conservatory. This specimen was planted in 2012, and the adjacent image shows just one year's growth!

The cultivar Thunbergia laurifolia 'Augustas Blue' can be seen in Kew's Palm House.

Pressed and dried specimens of Thunbergia laurifolia are held in Kew's Herbarium, where they are available to researchers by appointment. The details of some of these specimens, including images, can be seen online in Kew's Herbarium Catalogue.

A specimen of Thunbergia laurifolia wood is held in Kew's Economic Botany Collection in the Sir Joseph Banks Building, where it is available to researchers by appointment. 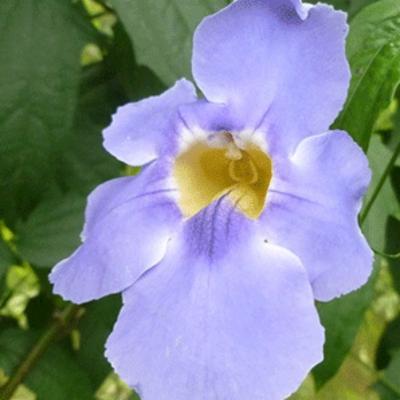 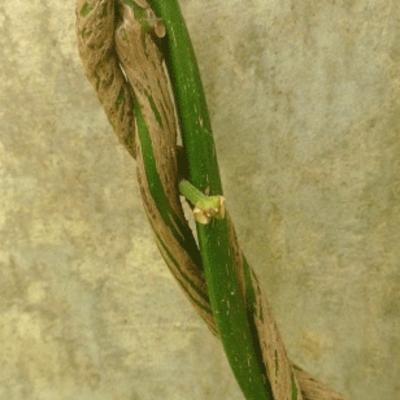 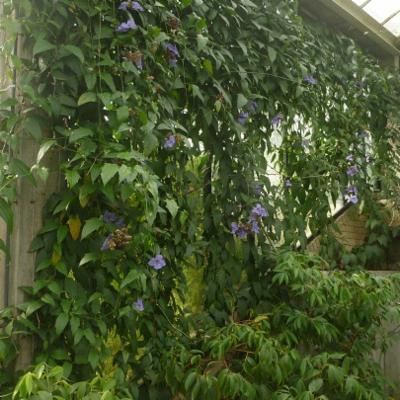 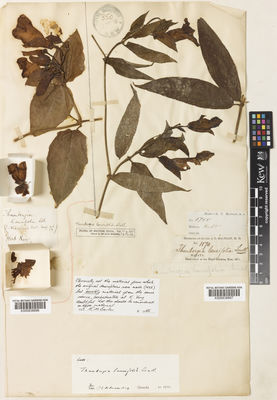