Although quite similar at first glance, Aesculus indica is usually a slightly smaller tree than the common horse chestnut (A. hippocastanum), and differs in having smooth, flaky, grey-green (rather than red-brown) bark. It also flowers later, its pinkish-white flowers appearing in strikingly beautiful spikes in July, making it a really handsome tree for a medium to large garden (it can grow to 20-30 m tall, so is not suitable for a small space). 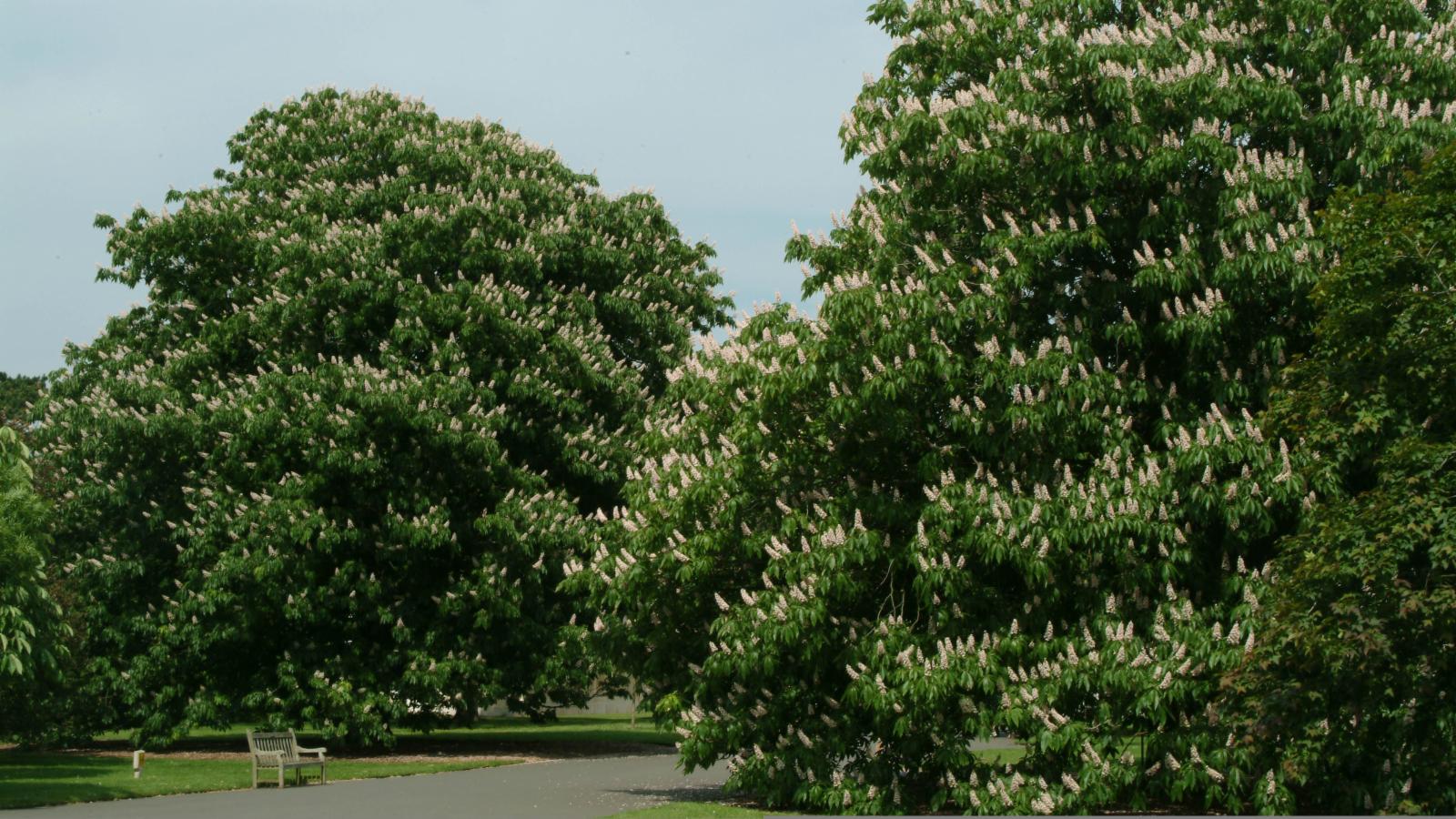 Although quite similar at first glance, Aesculus indica is usually a slightly smaller tree than the common horse chestnut (A. hippocastanum), and differs in having smooth, flaky, grey-green (rather than red-brown) bark. It also flowers later, its pinkish-white flowers appearing in strikingly beautiful spikes in July, making it a really handsome tree for a medium to large garden (it can grow to 20-30 m tall, so is not suitable for a small space).

Aesculus indica is native to the lower slopes of the north-west Himalaya, from Afghanistan and Pakistan to western Nepal. In the Himalaya it is one of the dominant trees of deciduous forests, growing alongside oaks, maples, birches and laurels. It was introduced to Britain in 1851 by Colonel Henry Bunbury (a friend of Sir Joseph Hooker, Director of Kew from 1865-1885), who planted seeds in his family's Suffolk garden.

Native to the north-west Himalaya, from north-east Afghanistan, western Pakistan and Kashmir to Nepal, where it is found up to about 3,000 m above sea level.

Leaves: The leaves have 5-9 thin, finger-like leaflets on each leaf-stalk. The central leaflets are longer than the outer ones, and grow up to 30 cm long. Young leaves are reddish-bronze, turning glossy dark green, and finally golden in the autumn.

Flowers:  The flowers appear in July and are carried in upright spikes, up to 30 cm high or more. Individual flowers have four petals, the upper pair being mainly white, with a yellow blotch at the base turning red, while the lower two petals are tinged with pink.

Fruits: The fruits are smooth and spineless, and contain a shiny seed ('conker') which is wrinkled, and is darker and smaller than that of A. hippocastanum .

Although Indian horse chestnut is widely distributed in the north-west Himalaya, in Nepal its relatively limited distribution, and the collection of its fruits for sale, are causes for concern there.

Indian horse chestnut is a handsome tree which is widely cultivated as an ornamental in temperate regions. Flowering occurs some six weeks later than other chestnuts, making this species a popular addition to parks and roadsides, since it extends the flowering season. The insect-pollinated flowers appear during a relatively barren period between the spring and summer blooms of other shrubs and trees, making this tree a particularly valuable resource for bees.

The wood is close-grained and easily worked. In India it is carved and used to make pots, boxes, spoons, and the like. Aesculin (or esculin), the toxin found in the seeds, is used in microbiology to aid in the identification of some species of bacteria (such as Listeria and Enterococcus species). It is a natural pH indicator that, when extracted, changes from colourless to a fluorescent blue (viewed under UV light) when in an acidic pH range.

All species in the genus Aesculus contain a saponin-class toxin called aesculin. The young leaves and flowers are usually considered the most toxic parts, but the bark and seeds (nuts) also contain aesculin. This is poisonous to many animals, including humans, because it destroys red blood cells. However, some animals appear to be unaffected - for example deer and squirrels eat the seeds. In India and Nepal the seeds of Aesculus indica are eaten by cattle, and the leaves and twigs are lopped and given as fodder. The seeds are also eaten by humans in India and Nepal during times of food scarcity. The seeds are steeped in water first to remove the toxin and then ground into a flour and roasted.

Indian horse chestnut grows well in any good, moist, garden soil and will tolerate chalk. It performs best in light shade. It is resistant to the horse chestnut leaf-mining moth ( Cameraria ohridella ), the caterpillars of which attack the leaves of common horse chestnuts, leaving them brown and blotchy.

In the Arboretum Nursery at Kew, Aesculus indica is propagated by seed and by grafting. The mature trees produce abundant fruit, resulting in many seedlings, which can be seen beneath the trees in late spring. The seeds quickly lose viability and must not be allowed to dry out before sowing. To maximise their chances of survival, some seeds are sown under glass in pots and others outside in the Arboretum Nursery field. The seeds sown in the field have to be protected from mice and squirrels. The seeds sown under glass are placed in air pots filled with an open, gritty mixed substrate. These seeds germinate faster than those sown outside and will have a higher germination success rate. The seeds sown in the field usually germinate in spring, about five months after sowing. It is easy to over-water the seeds, and cause rot before germination takes place. Some of the plants grown under glass are planted out the following spring. Others are grown on, in successively larger pots. The plants are usually moved out into their final position in the Gardens at about three years of age. All the young trees are protected by netting, which is left in place until the trees are established, which takes up to 10 years.

Both Kew and Wakehurst have fine specimens of Indian horse chestnut, but the best example is probably that on the lawn in front of the Nash Conservatory at Kew. This tree is a particularly good flowering form selected in 1935 by Sydney Pearce, a former Assistant Curator of the Arboretum at Kew. Grafted plants from this tree are sold as the cultivar Aesculus indica 'Sydney Pearce'. Other Indian horse chestnut trees can also be found along Little Broad Walk, inside Elizabeth Gate.Dried and alcohol-preserved specimens of Aesculus indica are held in Kew's Herbarium, where they are available to researchers from around the world, by appointment. The details of some of these specimens, including images, can be seen online in the Herbarium Catalogue.

Specimens of fruits, seeds, wood and wooden articles (including spoons, pots and bowls) from Indian horse chestnut are held in the behind-the-scenes Economic Botany Collection.

Distribution
India
Ecology
Deciduous forest on mountain slopes, and in moist, shady valleys.
Conservation
Not yet assessed according to IUCN Red List criteria. In Nepal, its limited distribution potentially places it at risk from deforestation, and the collection of fruits for sale is a further cause for concern.
Hazards

The seeds (nuts) of the Indian horse chestnut contain a toxin called aesculin, which is poisonous to humans and many other animals. 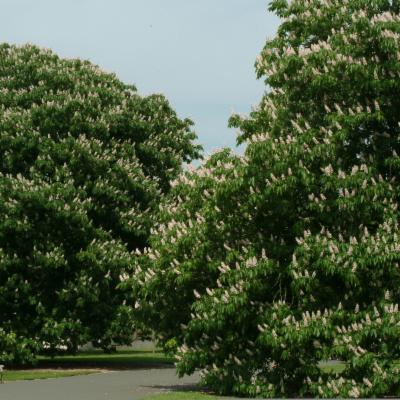 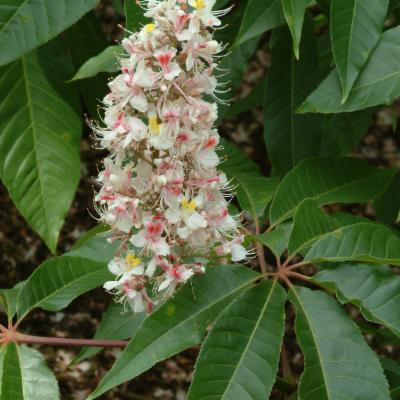 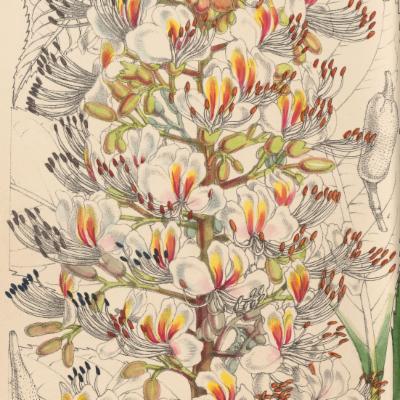 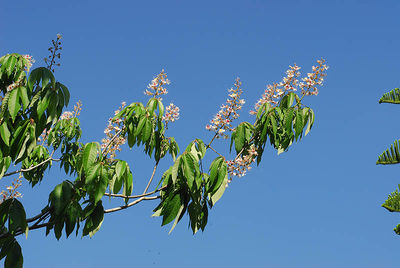 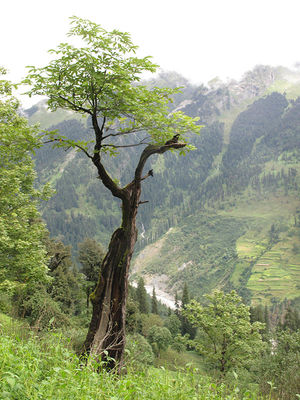 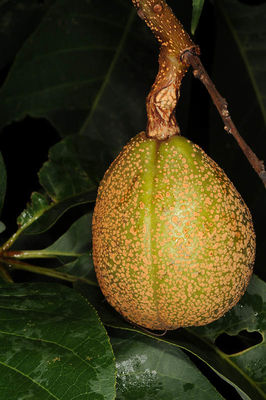 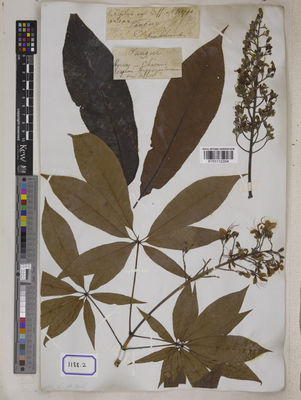 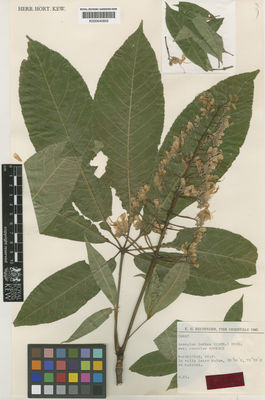