Several bulbs of Crinum woodrowii were sent to Kew by the botanist G.M. Woodrow in January 1897. At the time they were thought to be of C. brachynema, but when they flowered at Kew in July 1897, the plants proved to be of a new species. In 1898 the British botanist (and Keeper of Kew's Herbarium, 1890-1899) John Gilbert Baker described them as C. woodrowii. 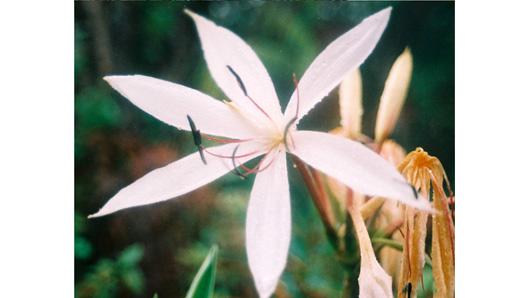 General Description
Woodrow's crinum lily is a Critically Endangered bulbous plant with great potential as an ornamental, and is restricted to Maharashtra State in western India.

Several bulbs of Crinum woodrowii were sent to Kew by the botanist G.M. Woodrow in January 1897. At the time they were thought to be of C. brachynema, but when they flowered at Kew in July 1897, the plants proved to be of a new species. In 1898 the British botanist (and Keeper of Kew's Herbarium, 1890-1899) John Gilbert Baker described them as C. woodrowii.

For a long time only a single herbarium specimen of this species existed (collected by G.M. Woodrow in 'Bombay' in May 1899), and C. woodrowii was considered 'possibly extinct' until it was re-discovered a century later during fieldwork in 2001-2004. It has now been assessed as Critically Endangered due to its narrow range of distribution and extreme rarity.

Restricted to the North Western Ghats of Maharashtra State in western India, where it has been found at Kate's Point, Mahabaleshwar, growing on hill slopes and in valleys, on the margins of semi-evergreen forest at 1,250-1,300 m above sea level.

Overview: A tall herb with a bulb 8.6-16.2 cm across. The bulb is globose and the outer tunics are brown and membranous.

Leaves: The leaves are present at the same time as the flowers, or sometimes appear after flowering. There are 8-17 sword-shaped leaves, which are flat, bright green, and slightly glaucous beneath. They are hairless, with a sharply-pointed apex,and are white waxy, scabrous (rough) along the margin and 45.5-80 x 4.5-14 cm long. The leaf sheaths form a pseudostem.

Flower stalk: A single scape (leafless flower stalk), rarely two, rises from the bulb outside the tuft of leaves. It is stout and compressed, 53.5-82.5 x 1-3 cm long, and green at the base and apex, purple in the middle and faintly channelled. Some 10-20 fragrant flowers are borne in an umbel.

Flowers: The pedicels (individual flower stalks) are 1-3 cm long and green with a purple tinge. Two spathe valves (involucral bracts), 8.7-10 x 2.7-3.9 cm long, are borne opposite each other. They are deltoid, obtuse or acute at the apex, with an inflexed margin, and are often green, tinged with purple, veined and leathery. There are many bracteoles, 3-8 cm long, filiform and pale yellow or green. The perianth (whorls of sepals and petals) is hypocrateriform (salver-shaped) with a tube 4-8 cm long, which is circular in cross-section, curved, green with a purple tinge when in flower, and purple when in bud. The segments spread equally, and are white, lanceolate, acute at the apex, longer than perianth tube, 8.6-10 x 1-1.8 cm, tinged with purple on the dorsal median line and shiny. There are six stamens with filaments 6-7.2 cm long, white in the lower half and at the tip, red in the upper half and shorter than the perianth lobes. The anther lobes are versatile, linear, crescent-shaped, 1.2-1.5 cm long, and yellow, or grey when wet. The pollen grains are mono-aperturate (have a single opening), depressed globose, 58.82 x 64.70 µm. The exine (outer wall) is micro-verrucate (warty) with echinulate excrescences (small, spiny outgrowths). The oblong ovary is 8-10 x 3-4 mm and three-celled, with numerous ovules in axile placentation. The ovules are sessile and the style is circular in cross-section, filiform, overtops the stamens, and is 15-15.6 cm long, white in the lower half and red in the upper half. The stigma is lobed.

Fruits: The fruits are irregular in shape, 3-7 cm across, and trilocular (three-chambered), with a peduncle about 3 cm long. There are about three seeds per fruit. The seeds are large and rounded, with a thick testa and copious albumen (storage tissues) and burst from the fruit when ripe.

Flowering begins in May and June and fruiting takes place from July onwards. Stingless bees ( Trigona species) and jewel beetles forage on Crinum woodrowii and probably act as pollinators. However, detailed pollination studies are urgently needed.

The dispersal of seeds is by atelechory (dispersal over a short distance, in this case aided by rain-wash). The Mahabaleshwar area receives a significant annual rainfall of about 6,000 mm during the south-west monsoon (June - August).

Only one population, of around 150 individuals, of Crinum woodrowii is known. Threats include harvesting of bulbs from the wild for sale in local markets for medicinal and ornamental purposes, repeated forest fires and depletion of the potential habitat of this dwindling species.

Crinum woodrowii is also endangered by natural pests, such as the caterpillars of Polytela species (a moth), which feed on the scapes, flowers and fruits, posing a severe threat to the remaining population, feeding as they do on the reproductive parts of the plant.

Although Critically Endangered in the wild, Crinum woodrowii can be propagated from seed under nursery conditions. There is an urgent need to harvest seeds from the wild and germinate them under nursery conditions, for subsequent cultivation in glasshouses and gardens, and eventual re-introduction of the species to suitable habitats.

Crinum woodrowii has beautiful flowers, and merits wider use as an ornamental.

The attractive, fragrant flowers could be used commercially in the pharmaceutical and perfume industries.

Crinum woodrowii is not currently grown at Kew, but other species of Crinum can be seen growing in the Palm House and Temperate House.

Pressed and dried specimens of Crinum woodrowii are held in Kew's Herbarium, where they are available to researchers, by appointment. The details of some specimens of other Crinum species can be seen online in the Herbarium Catalogue.

None known, although the bulbs of some other Crinum species, including some from India, are poisonous to both humans and livestock. 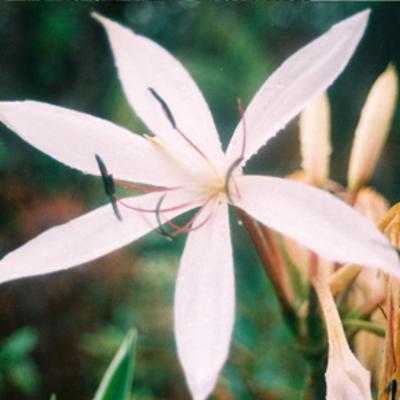 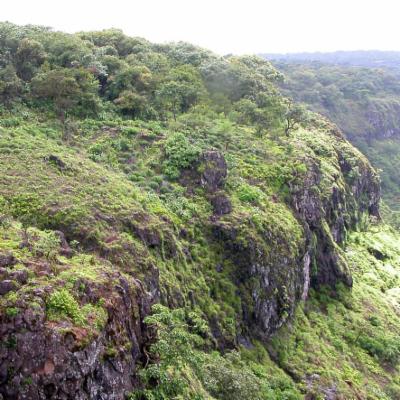 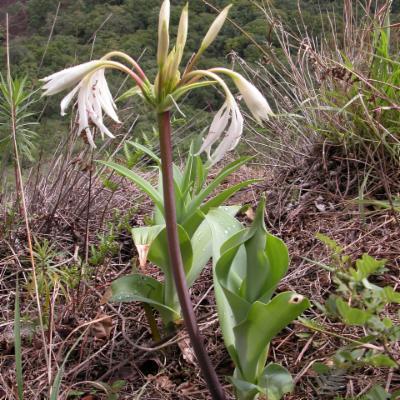 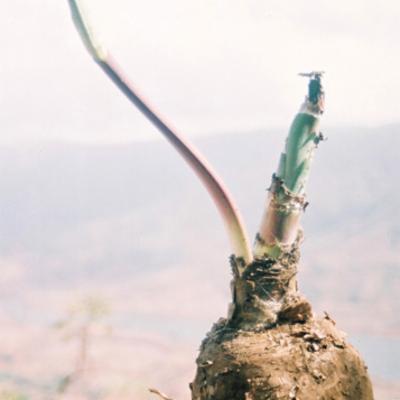 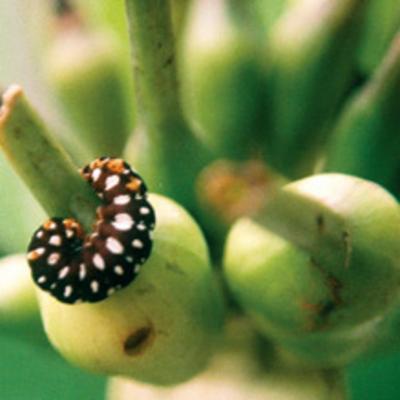