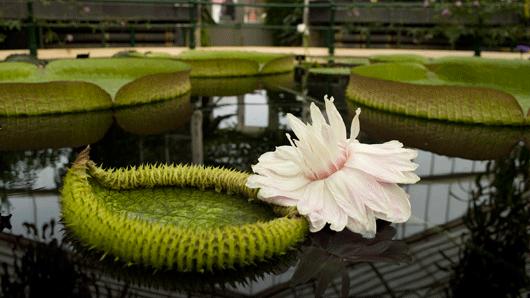 The genus Victoria was named in honour of the UK's Queen Victoria (1819-1901). The specific epithet cruziana was given in honour of Andrés de Santa Cruz (1792-1865), President of Peru and Bolivia, who sponsored an expedition to Bolivia in which the first specimens of this species were collected.

Victoria cruziana is one of two species within the genus Victoria, the other being Victoria amazonica. These giant waterlilies attracted great attention in the UK when they were first cultivated at Kew during the reign of Queen Victoria.

Santa Cruz waterlily is native to subtropical South America, where it is found in Argentina, Paraguay and Bolivia.

Overview: A rooted aquatic herb, prickly with the exception of the upper surface of leaves and most surfaces of the flowers.

Leaves: Bright green lily pads (leaf blades) up to 2 m wide, with thick rims (upturned leaf margins) up to 20 cm high, which distinguish it from its close relative Victoria amazonica .

Lily pads have a waxy surface, which helps repel water. Leaves green on both sides (underside sometimes reddish), smooth above but with abundant sharp spines beneath, which are possibly a defence against herbivorous fish and manatees. Underside of lily pad bears a network of prominent veins.

The floating leaf blade is attached to the rhizome by a long, flexible petiole (leaf stalk).

Flowers: Large, floating, creamy-white on opening, becoming light pink on the second night (after pollination). Anchored by long flower stalks arising from an underground rhizome buried in the mud of the river-bottom. Flower buds are only prickly at the base (in contrast to those of V. amazonica , which are prickly all over).

Pollination is carried out by a beetle ( Cylocephata castaneal ), which is attracted by the floral scent.

Victoria cruziana requires a specific habitat (slowly moving, shallow waterways), which may be threatened by climate change and associated increase in flooding. Deforestation (removal of rainforest from areas around its habitat) is also a possible threat, as it can lead to a reduction in water quality.

Victoria cruziana is cultivated as an ornamental. It is grown under glass as an annual in temperate regions.

Waterlily seeds have been used as a food-source in Central America, and V. cruziana was once known as 'water corn' in Paraguay, because of its large seeds that were used to make flour.

Kew's original plants and seeds of  Victoria cruziana  were lost during World War II, but ironically  V. cruziana  survived in the bomb-damaged conservatory at the botanical garden of the University of Helsinki.

After the war, Helsinki re-distributed material to many botanical gardens, providing a good example of the importance of sharing material among such institutions. This variety of  V. cruziana  is still the one grown in most botanical gardens around the world. It is a self-compatible clone; seeds are produced by spontaneous self-pollination.

Santa Cruz waterlily is a short-lived perennial, but at Kew it is raised as an annual, from seed planted each January.

Flowers are hand-pollinated during the summer and then sealed in a bag. This enables easy collection of the resulting seed in the autumn.

The seeds must be kept moist, preferably in water, at all times. To prevent premature germination or death, they are kept at a constant temperature of 15°C.

It is sometimes necessary to nick the seed with a scalpel to initiate germination, which usually occurs ten days later. In January, the newly germinated seed is moved into a tiny pot that is kept in water.

As the plant grows, it is moved into larger pots until it occupies a one-ton pot. Loam is used as a substrate because it does not float, and this is rich in nutrients and has the capacity to hold the fertiliser contained in the 'feed bombs' given to the plant.

Victoria cruziana can be seen in Kew's Waterlily House during the summer.

It is grown in Kew's behind-the-scenes Tropical Nursery until March or April, when plants have five or six leaves, at which point some are put on display in the Waterlily House.

Kew also raises juvenile Victoria plants to donate to other institutions, which do not have the facilities to raise them from seed.

Leaves and other plant parts bear sharp spines, which can be hazardous. 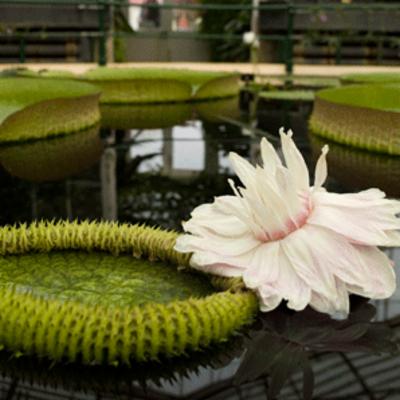 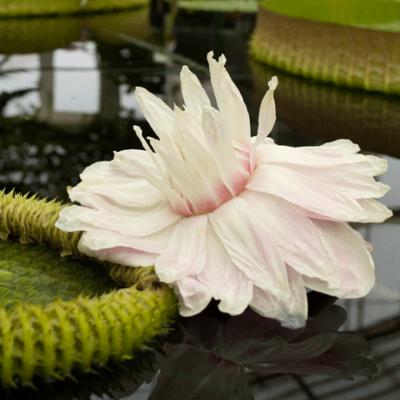 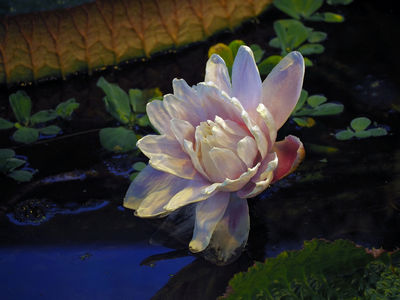 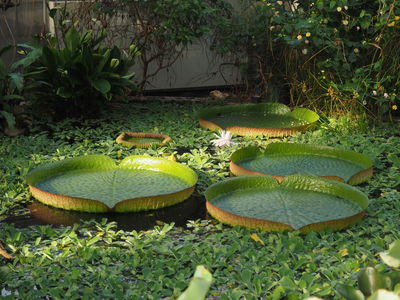 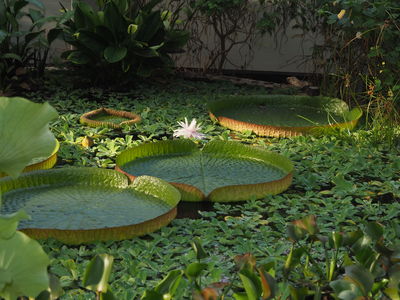 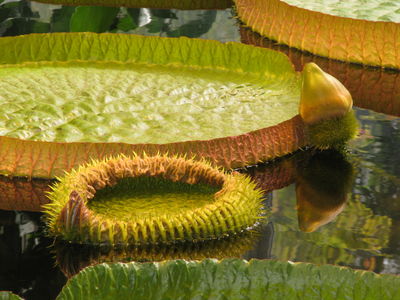 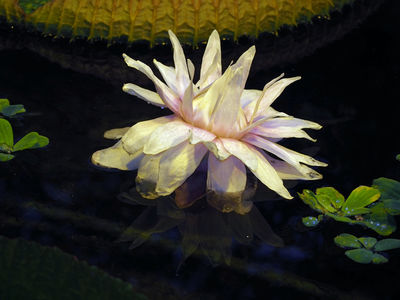