This attractive, but variable, shrub is native to China and has been cultivated in China and Japan for a considerable time. Sir William J. Hooker, writing in Curtis's Botanical Magazine in 1857, described it as a 'rare and handsome plant', and noted with some surprise that it had 'flourished unharmed in the open ground' at the nurseries of Messrs Veitch and Son (of the Exeter and Chelsea Nurseries). 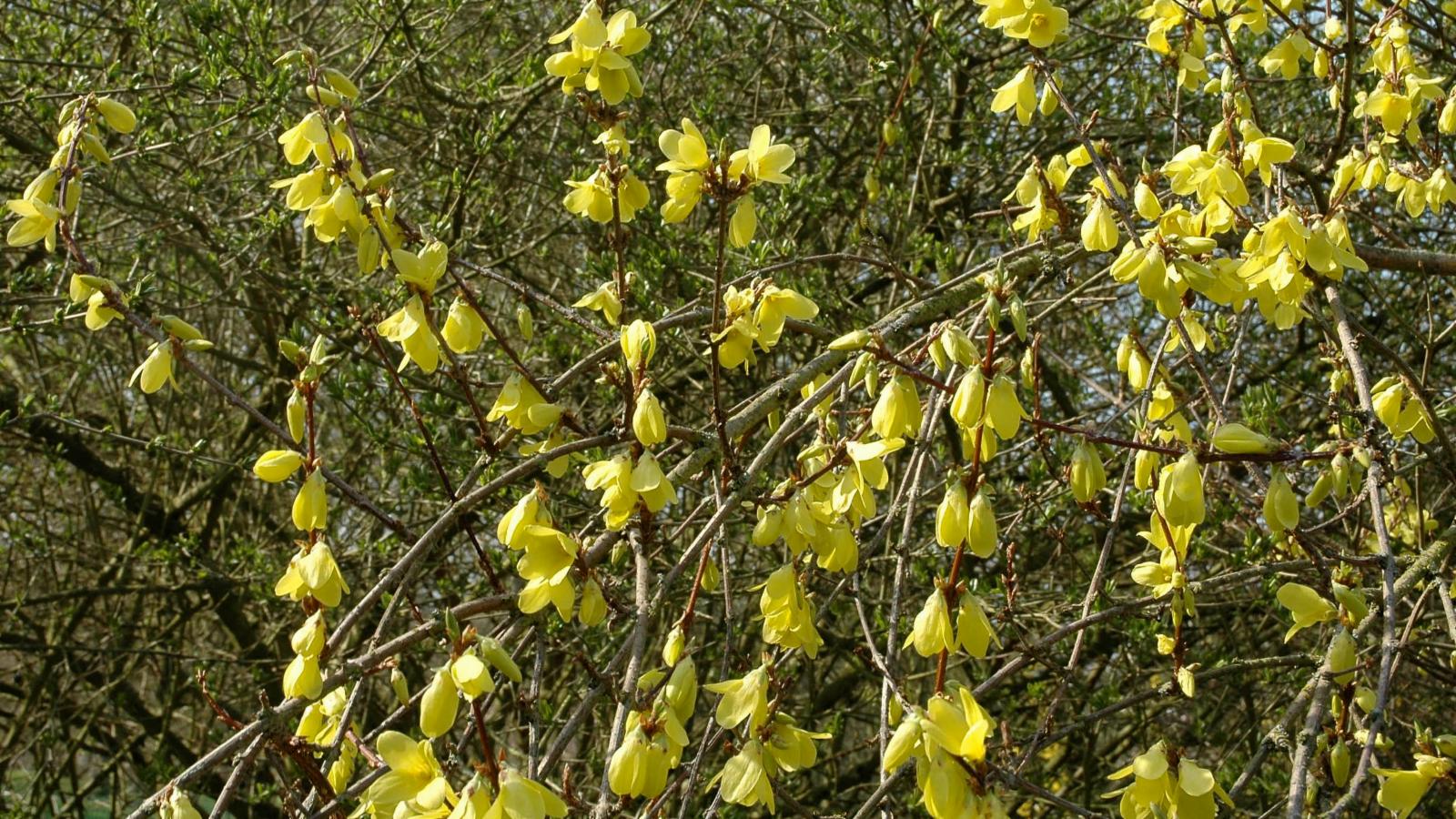 General Description
Weeping forsythia is an elegant, hardy shrub, which is a welcome sight in spring, thanks to its abundance of bright golden-yellow flowers on bare branches.

This attractive, but variable, shrub is native to China and has been cultivated in China and Japan for a considerable time. Sir William J. Hooker, writing in Curtis's Botanical Magazine in 1857, described it as a 'rare and handsome plant', and noted with some surprise that it had 'flourished unharmed in the open ground' at the nurseries of Messrs Veitch and Son (of the Exeter and Chelsea Nurseries).

Weeping forsythia was taken for a lilac by Carl Thunberg, who was a pupil of the Swedish botanist Carl Linnaeus and visited Japan in 1775-1776. He therefore named it Syringa suspensa. Professor Martin Vahl (1749-1804), realising that the plant was not a lilac, later renamed it Forsythia, after William Forsyth (1737-1804), the then Superintendent of the Royal Gardens at Kensington and St James's Palaces, and one of the founding members of the Royal Horticultural Society. Forsythia suspensa was apparently introduced to Holland by Arnold Verkerk Pistorius, in 1833. However, it arrived in England only in the 1850s.

Native to China, where it occurs in Anhui, Hebei, Henan, Hubei, Shaanxi, Shandong, Shanxi and Sichuan provinces, at 300-2,200 m above sea level. It has long been cultivated in China and Japan.

A straggling, deciduous shrub, with many spreading, pendulous, branches. Weeping forsythia grows to around 3 m high as a free-standing shrub, and higher if trained against a wall. The golden-yellow flowers are about 3 cm across, and appear before the leaves, singly, or in small groups, in March to April. The opposite, broadly ovate, green leaves are usually simple (undivided), but are occasionally three-lobed, and have toothed margins, except at the base. They measure about 4-8 cm in length and about 3-5 cm in diameter. The narrow capsules (fruits) appear from July to September.

Forsythia suspensa has not yet been evaluated according to IUCN criteria, but it is not known to be threatened in its native range. It has, however, been introduced to a number of temperate countries and has escaped from cultivation and invaded native forests in some parts of the United States.

Weeping forsythia is the source of the Traditional Chinese Medicine (TCM) 'Lián Qiáo', and is mentioned in some of the earliest Chinese medical texts dating back at least 4,000 years. It is often prescribed in combination with other plants in TCM, and has various uses there and in herbal medicine generally. A decoction of the fruit is used to treat boils and other skin infections, to treat intestinal worms, and to control menstruation. The roots are used to treat colds, fever and jaundice, and a decoction of the leaves and twigs is used to treat breast cancer. Laboratory studies have confirmed its anti-tumour, anti-bacterial and anti-inflammatory activities.

Since the early 1990s there has been a large increase in the diversity of plant-based products traded around the world for making cosmetics, herbal medicines (especially Traditional Chinese Medicines), health foods, potpourri, colouring agents and pet products. Kew is researching these using a range of morphological, chemical, and DNA fingerprinting methods to identify the species of plants being traded, and to study whether plant-derived products contain the appropriate range of compounds associated with their proposed use.

Over 1,000 species and over 1,500 plant extracts have been studied so far. Although in most cases the correct species has been traded, we have encountered a few incidents when incorrect species or poor-quality substitutes have been used. Other issues relate to the over-exploitation of some species, especially those that are harvested from the wild, and where there is a need to develop sustainable harvesting practices.

Weeping forsythia is hardy in Britain, where it is appreciated in gardens for its elegant habit and ease of cultivation. It can tolerate partial shade, but flowers best in full sun. Flowers are borne on the previous year's wood, so any pruning should be done immediately after flowering to ensure blooms are produced the following year. Older plants, that may have become untidy, can be cut back to one-third to promote young growth (rejuvenation).

Forsythia suspensa can be seen growing to the west of the Waterlily House and north of the Princess of Wales Conservatory at Kew, and in Westwood Valley at Wakehurst.

Distribution
China
Ecology
Thickets or grassy areas on slopes, in valleys and gullies.
Conservation
Not known to be threatened.
Hazards 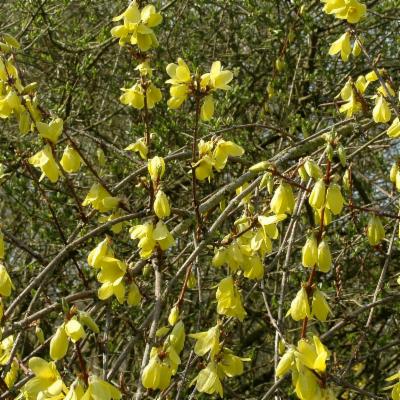 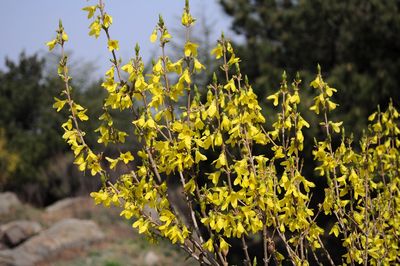 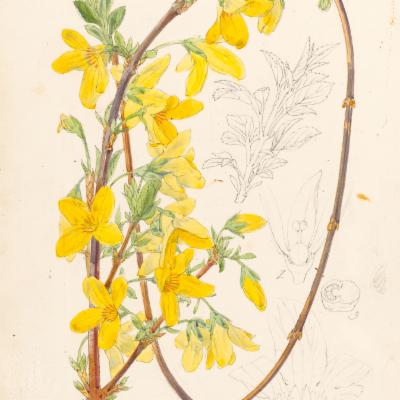 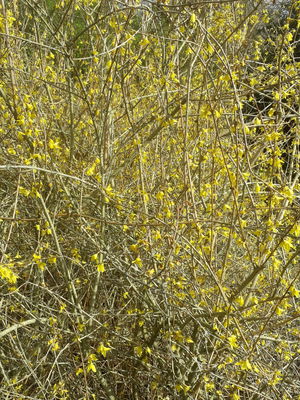 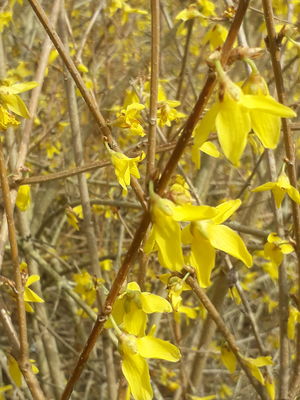 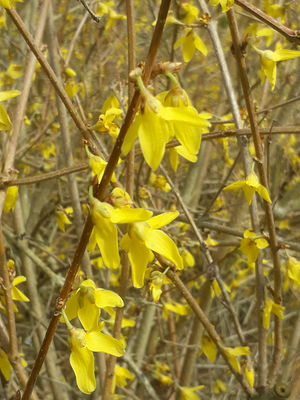 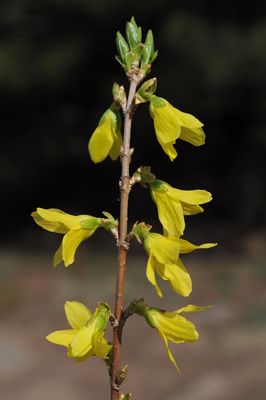 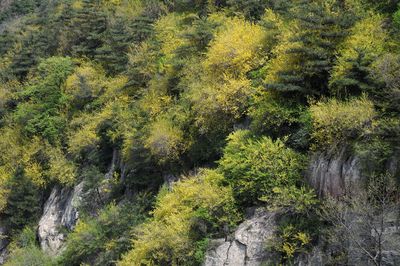 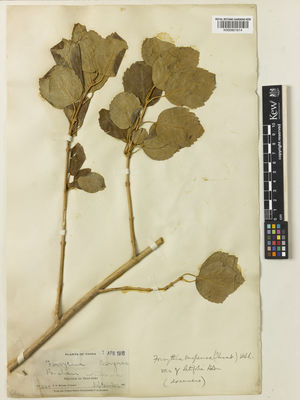