Dendrobium aphyllum is an orchid found in almost every botanical garden and many amateur collections. It is attractive and easily cultivated with long, pendulous stems that become leafless in the resting period and, for a few weeks during the spring, carry numerous, pinkish violet, fragrant flowers with a pale yellow or whitish lip. Dendrobium is among the largest orchid genera, with an estimated 1,500 species, and although many of these are prettier than D. aphyllum, few are as rewarding and persistent in cultivation. Dendrobium aphyllum flowers between February and July in the wild and in cultivation. 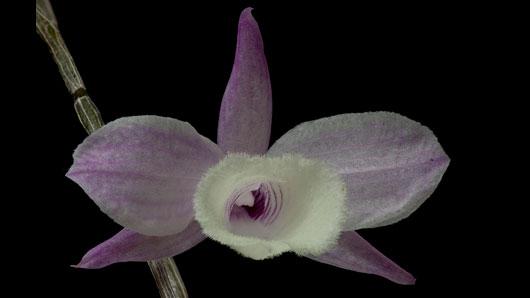 General Description
The proper scientific name of this commonly cultivated, tropical Asian orchid - most frequently known as Dendrobium aphyllum - is surrounded by much confusion.

Dendrobium aphyllum is an orchid found in almost every botanical garden and many amateur collections. It is attractive and easily cultivated with long, pendulous stems that become leafless in the resting period and, for a few weeks during the spring, carry numerous, pinkish violet, fragrant flowers with a pale yellow or whitish lip. Dendrobium is among the largest orchid genera, with an estimated 1,500 species, and although many of these are prettier than D. aphyllum, few are as rewarding and persistent in cultivation. Dendrobium aphyllum flowers between February and July in the wild and in cultivation.

From southern, central and north-eastern India, through Nepal, Bhutan, Burma (Myanmar), China, Thailand, Laos, Cambodia and Vietnam to Peninsular Malaysia. It grows in forests at 100-1,600 m and also on limestone cliffs.

An epiphytic orchid with clustered, cane-like, overhanging to pendulous stems from 20-200 cm long. The leaves are 3-10 cm long, 1-3 cm wide and deciduous after one growing season. The inflorescences are short, arising laterally from the leafless stems of the previous growing season. There are usually many inflorescences per plant, with one to three flowers on each. The flowers are 4-5 cm across and open widely with a pleasant fragrance. The sepals and petals are somewhat translucent, yellowish cream to whitish, more or less strongly suffused and marked with pinkish violet. The lip is trumpet-shaped, variable in width (from 2.0-3.7 cm wide when spread), pale yellow or less often white, whitish at the base, with dark violet branching veins inside the tube-shaped part, and densely covered with soft, short hairs on the exterior surface and along the margins, except in the basal part. The flowers are flimsy and short lived, lasting about a week.

History of the name

Dendrobium aphyllum was discovered by William Roxburgh in southern India and described in his book Plants of the Coast of Coromandel in 1795 under the name Limodorum aphyllum . Unfortunately, the illustration he provided was not accurate and led to disputes over this species true identity for the following two centuries. It did not help that the book in which Roxburgh published this orchid has always been rare and largely inaccessible, only to be found in a few of the world's best-stocked botanical libraries, such as that of the Royal Botanic Gardens, Kew.

During most of the nineteenth and twentieth centuries, Dendrobium aphyllum was best known as D. pierardii , perhaps because the latter had been much better illustrated by Sir William Hooker in 1822. Under this name, it became one of the most widely cultivated Dendrobium species, a status that it still enjoys. Another name for this species, D. cucullatum , was published in 1821 by Robert Brown, but until recently this had been almost forgotten. The correct name, D. aphyllum , only came into general use after 1985, when the influential Danish botanist Gunnar Seidenfaden confirmed, albeit with some reservations, that this was the same species that people were growing as D. pierardii . Gradually, the name D. aphyllum has come back into use.

Then, in 2003, orchid experts Eric Christenson and Howard Wood turned everything upside-down when they pronounced that D. aphyllum was not the same species as D. pierardii after all. They asserted that the plant William Roxburgh had illustrated back in the eighteenth century was a related but rather different species, which in 2003 was widely known as D. macrostachyum (never popular in horticulture due to its small, dully coloured flowers, but unusually widespread in the wild, from Sri Lanka to Australia and most areas in between). They also pointed out that the long-neglected name D. cucullatum was slightly older than D. pierardii . Therefore, according to the rules of botanical nomenclature, D. cucullatum was now the right name for D. pierardii .

Veteran orchid growers, who had changed their labels from D. pierardii to D. aphyllum , were now supposed to change D. aphyllum into D. cucullatum . If they happened to grow D. macrostachyum as well, they were expected to re-label it as D. aphyllum . A perfect recipe for confusion.

Unfortunately, or perhaps fortunately, Christenson and Wood were wrong. Their article suggested that they knew Roxburgh's plate of Limodorum aphyllum only from a reproduction and due to this had misjudged the size and colour of the flowers. In addition, they had overlooked an important distinguishing character (the relative size and shape of the mentum - a chin-like extension at the base of the flower) and did not appreciate that the plate almost certainly contained an error of perspective.

This mistaken identity has now been cleared up by Kew botanist André Schuiteman, with the result that the name D. aphyllum must be reinstated for the orchid formerly known as D. pierardii or D. cucullatum . Dendrobium macrostachyum should again be used for the smaller flowered species.

Dendrobium aphyllum is one of the most common Dendrobium species in tropical continental Asia. It may be locally threatened due to habitat destruction and excessive collecting.

In temperate countries, Dendrobium aphyllum is easy to cultivate in warm to intermediate greenhouse conditions under light shade. During the growing season, when the new leafy stems emerge and mature, the plant must be kept well watered in a humid atmosphere. During this period, generally from May to October, regular, low doses of fertiliser (appropriate for epiphytic orchids) can be given. In late autumn and winter, heavy watering and fertilisation should be stopped, although light misting can be continued to prevent too much drying out. The leaves will turn yellow and fall off. Lower temperatures (but not frost) and strong light during the leafless stage may stimulate flowering the following spring. Because of the pendulous stems and large size the plant may attain, it is best grown in a hanging basket. Any open, well drained orchid compost will do, as long as waterlogged conditions are avoided.

Dendrobium aphyllum is grown in the behind-the-scenes Tropical Nursery at Kew. It is occasionally also on display in the Princess of Wales Conservatory.

Dried and alcohol-preserved specimens of Dendrobium aphyllum are held in  Kew's Herbarium, where they are available to researchers from around the world, by appointment. The details of some of these can be seen online in the Herbarium Catalogue. 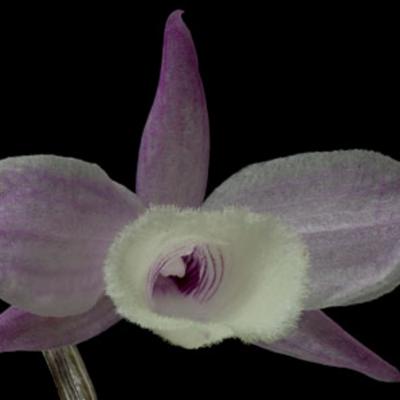 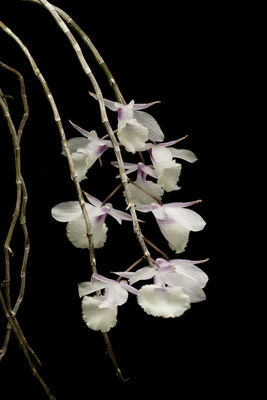 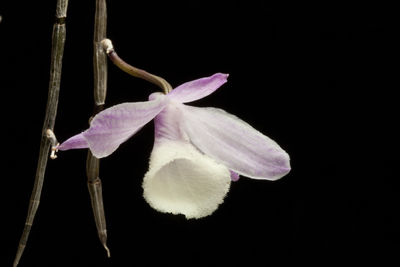 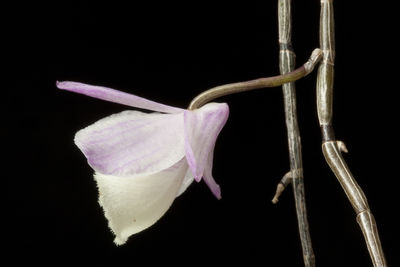 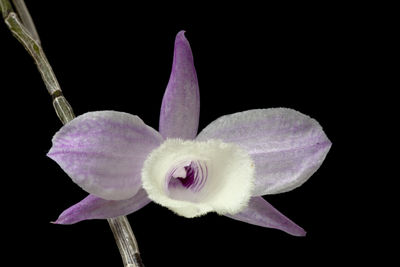 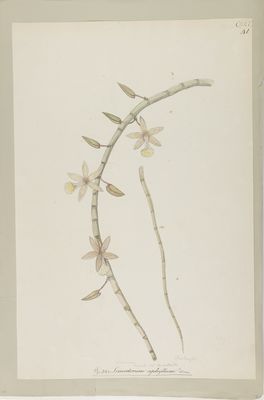 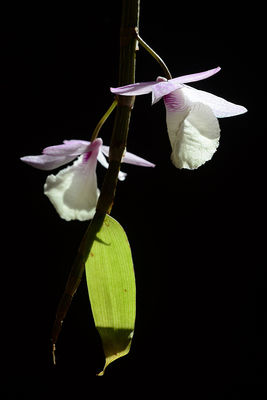 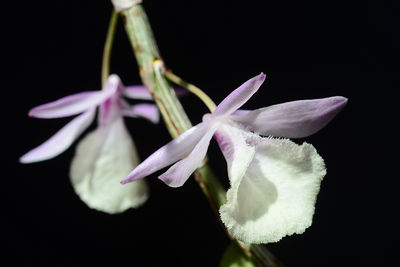 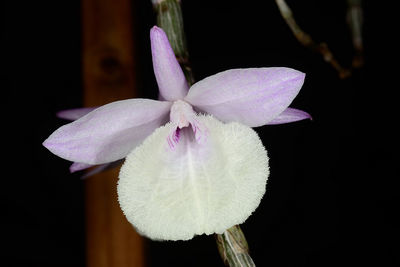 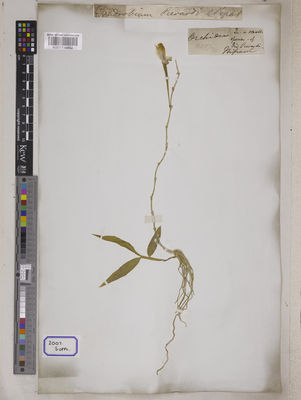 Recorded in error in: