Ophrys apifera is an attractive orchid with several small flowers, each of which has three large, pink, petal-like outer tepals, a large lip (labellum; modified inner tepal) resembling a bee, and two other inner tepals that look like antennae. The whole flower thus mimics an insect. In biology, the term 'mimicry' refers to cases where natural selection has favoured a resemblance between individuals of different species, and there are numerous examples of orchid flowers that resemble their insect pollinators. 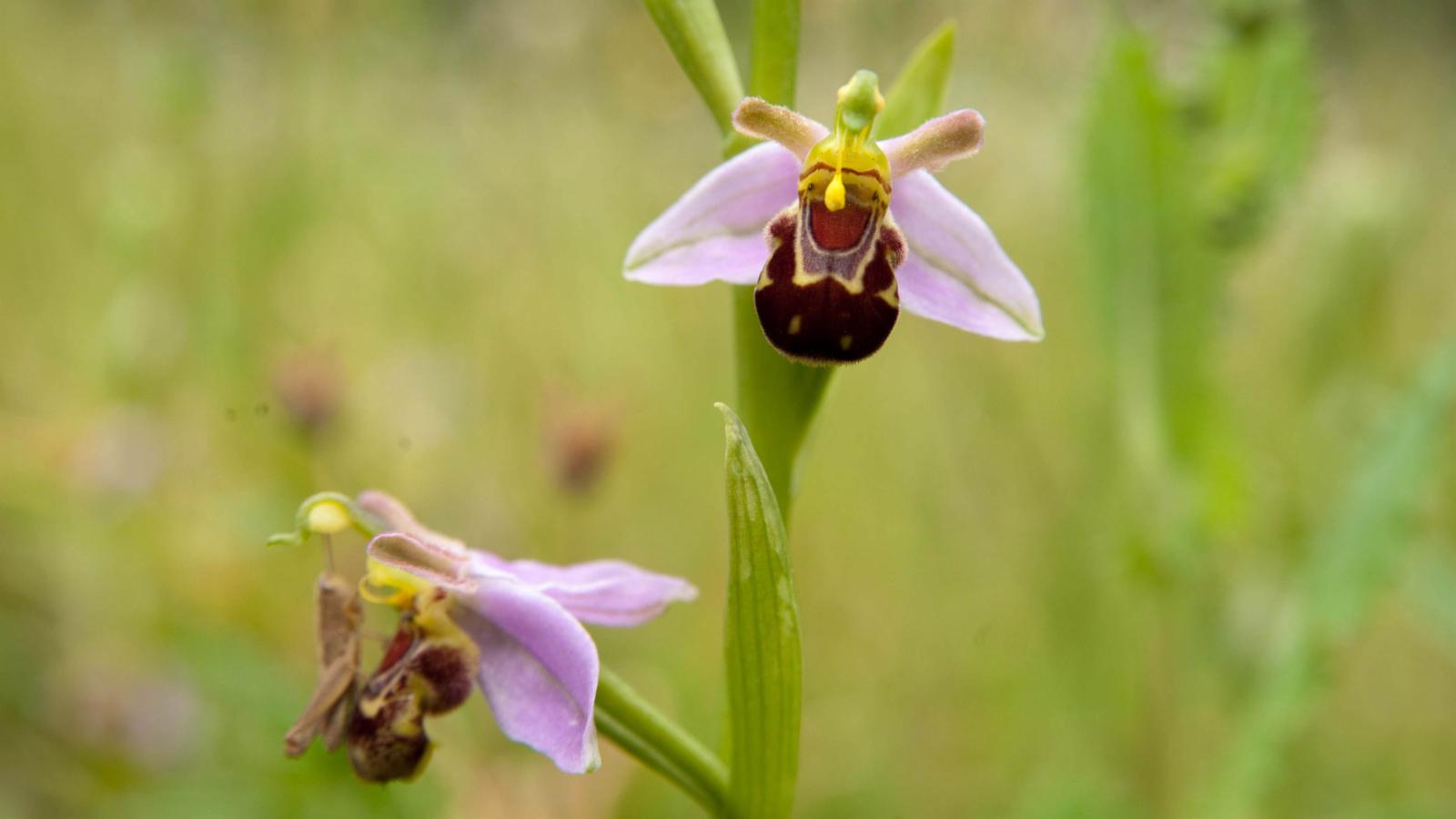 Ophrys apifera is an attractive orchid with several small flowers, each of which has three large, pink, petal-like outer tepals, a large lip (labellum; modified inner tepal) resembling a bee, and two other inner tepals that look like antennae. The whole flower thus mimics an insect. In biology, the term 'mimicry' refers to cases where natural selection has favoured a resemblance between individuals of different species, and there are numerous examples of orchid flowers that resemble their insect pollinators.

In other Ophrys species in the Mediterranean region, for example, male bees or wasps try to copulate with the lip of the flowers, which look and smell like the females of their own species. However, O. apifera is generally self-pollinated; the pollinia, which hang on a thread, are blown against the receptive surface of the stigma.

Native to Europe, where it occurs In Great Britain, Ireland and the Mediterranean eastwards to the Caucasus, across Turkey to northern Iran, the Middle East and North Africa. In Britain the bee orchid is found as far north as County Durham and Cumbria, but it is more abundant in the south and east. It is scattered throughout Ireland, but here it has declined since the 1930s as a result of the ploughing of grasslands.

The minute seeds are produced in thousands and can blow several kilometres, so bee orchids can appear unexpectedly, especially in exposed ground such as on road cuttings, quarries and other industrial sites, often on chalk or limestone soil (although not exclusively so).

The tubers are rounded. The leaves are mainly in a basal rosette, which appears in the autumn. The stems are up to 50 cm tall, with usually around six (but up to 14) flowers. The sepals are pink or whitish and are 12-16 mm long. The petals are narrow, green or purplish, velvety and 5 mm long. The lip is three-lobed. The lateral lobes form hairy cones. The middle lobe is pointed and bent backwards to form the rounded body of the 'bee', and is brown with a dark, angular u-shape outlined in yellow.

The number of species of bee orchids ( Ophrys species) that exist in Europe has been much-debated, and was the subject of a recent project funded by the John S. Lewis Foundation, involving Kew scientists Dion Devey and Mike Fay, working alongside partners Richard Bateman and Julie Hawkins (Reading University).

The team used a wide range of molecular and morphological techniques in their field study of bee orchid populations across the Mediterranean region. They could discriminate only ten species of Ophrys , even when they applied all the available diagnostic markers, and even then only six groups proved to be consistently recognisable. Morphological analyses also showed significant overlap between populations that had previously been assigned to different species.

The results of these studies will help scientists to prioritise populations more effectively for conservation.

Description of seeds: The tiny seeds are wind-dispersed.

Germination testing: 100 % germination was achieved on sterile Norstog media, at a temperature of 21 °C, on a cycle of 12 hours of daylight/12 hours darkness.

Bee orchids have been planted in long grass alongside the path leading southwards from Elizabeth Gate at Kew. Look out for Saxifraga granulata (meadow saxifrage) and Salvia verbenaca (wild clary) in this area too, both of which are native British grassland species which have declined in numbers in the wild since the Second World War as a result of land use changes.

Alcohol-preserved and pressed and dried specimens of Ophrys apifera are held in Kew's Herbarium, where they are available to researchers, by appointment.

An original painting of Ophrys apifera for Flora Londinensis (William Curtis, 1777), is held in the Library, Art and Archives at Kew.

Plant slender, (15-)20-50(-70) cm tall with (2-)3-12(-17) flowers in a (relatively) lax spike. Sepals violet to white, narrowly ovate to lanceolate-oblong, 11-17 × 5-9 mm; dorsal sepal boat-shaped, straight to slightly incurved, from the base reflexed. Petals yellowish green to rose-coloured, sometimes suffused with red, triangular (often auriculate) with recurved margins, 1-3(-7) × 1(-2) mm, shaggy, spreading. Lip with (dark) brown ground colour, straight with strongly recurved margin, deeply (to moderately) three-lobed close to the base, 8-14 × 10-16 mm, velvety to shaggy along the margin (otherwise nearly glabrous); side lobes converted into obliquely conical bulges; mid-lobe much longer than the side lobes, rounded, provided with a downward pointing, more or less rectangular to rhomboid appendage (often hidden under the strongly vaulted lip); mirror distinct (rarely obscure), consisting of a more or less H-shaped or often slightly more complicated figure, the basal arms of which are connected to the base of the lip (occasionally, there are also a few isolated markings towards the apex), dull greyish violet with a cream border. Column extended into a sigmoidly curved apex, not tapering towards the base (in side view); stigmatic cavity approximately as wide as long and approximately twice as wide as the anther, with dark, lateral, eye-like knobs at base; pollinia with flaccid stalks.

Dry to wet calcareous soil in full sunlight to light shade, from sea level to 1800 m altitude. Typical habitats include edges of woods, open deciduous forest and pine woods, garrigue and grassland as well as open reed swamps and stabilised coastal dunes. Additionally, it is frequently seen as a pioneer plant in places such as recently abandoned quarries, railway embankments and roadside verges.

Throughout the Mediterranean, including the Levant, and in Atlantic western Europe north to the British Isles, Holland and Denmark. 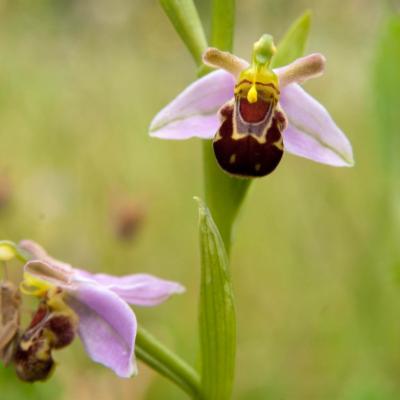 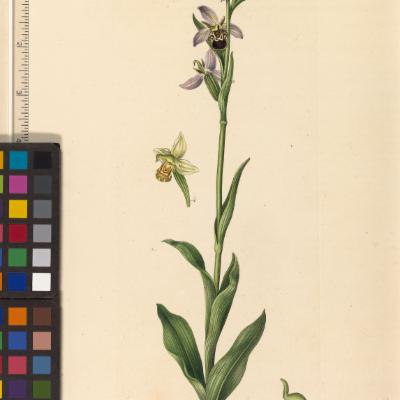 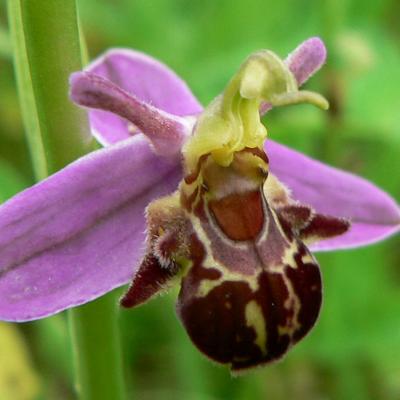 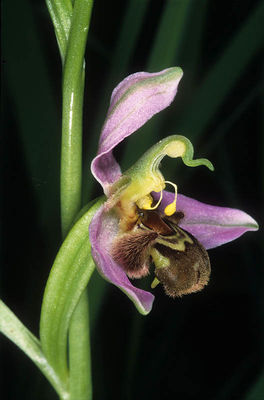 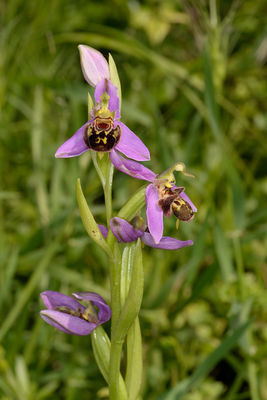 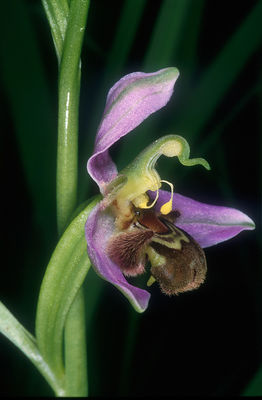 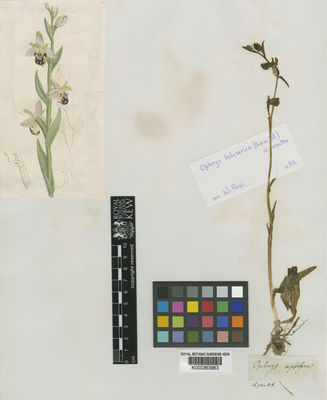 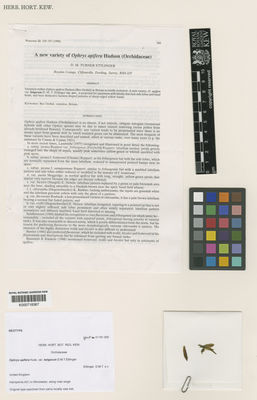 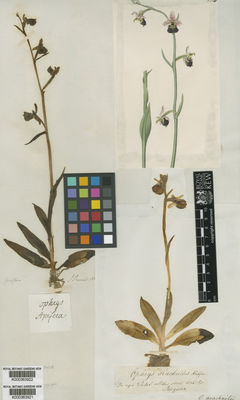