This species is accepted, and its native range is Hungary, Medit. to N. Iran. 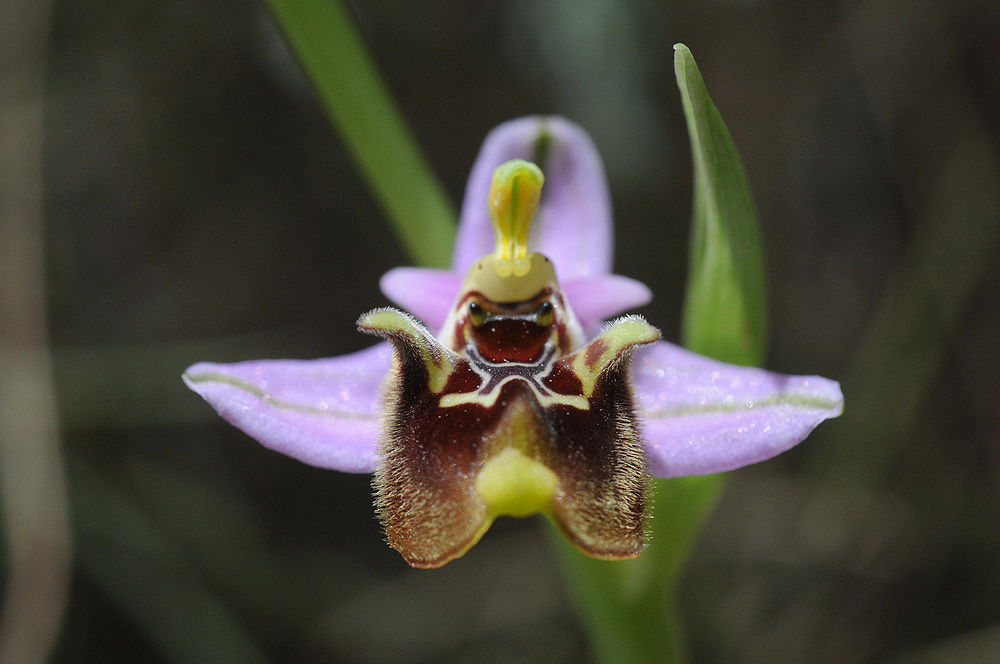 Throughout most of the Mediterranean and further east to the Crimea, Iran and the Caucasus. It seems absent from Cyprus and some other islands as well as from the Mediterranean coast of the Levant. In the northeast, it reaches Hungary and Rumania. [Aeg, Alb, Bal, Bul, Cor, Cre, Fra, Gre, Hun, Ita, Por, Rum, Sar, Sic, Spa, Tur, Ukr, Yug; Ana, Mor, Tun]

Dry as well as moist soil in full sunlight to light shade, from sea level to 2000 m altitude. Typical habitats include roadside slopes, garrigue, open pine and oak woods, grassland and olive groves that are run without application of fertiliser, pesticides and mechanical treatment of the soil.

Plant slender, 10-50(-90) cm tall with 2-15(-21) flowers in a lax spike. Sepals violet to white or green, (ob)ovate to elliptic (less frequently lanceolate-oblong), 7-16 × 3-10 mm; dorsal sepal flat to shallowly boatshaped, more or less incurved, from the base reflexed. Petals violet to rose-coloured or green, triangular to triangular-lanceolate or linear (sometimes auriculate) with reflexed margins, 1.5-8 × 0.8-4 mm, shaggy, spreading to slightly recurved. Lip with (reddish) brown to dark brown ground colour, straight with strongly recurved sides, deeply three-lobed close to the base, 6-16 × 6-20(-30) mm, brownish shaggy on the outer side of the side lobes and velvety along the margin of the mid-lobe (otherwise nearly glabrous); side lobes converted into obliquely conical to horn-like bulges; mid-lobe of varying length in relation to the side lobes, obtuse to rounded, provided with a broad and conspicuous, erect (to porrect), rectangular, rhomboid or (ob)triangular, often dentate appendage; mirror distinct, consisting of an H- or X-shaped to considerably more complicated (rarely simpler) figure, the basal arms of which are connected to the base of the lip, dull greyish blue to violet (rarely reddish brown) with an (often broad) cream border. Column acute to obtuse, not tapering towards the base (in side view); stigmatic cavity at least as wide as long and approximately twice as wide as the anther, with dark (rarely pale), lateral, eye-like knobs at base. 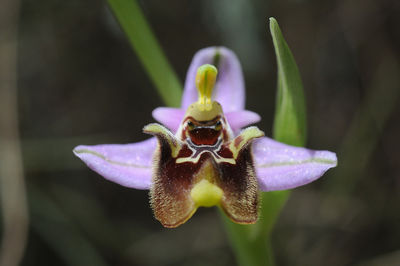 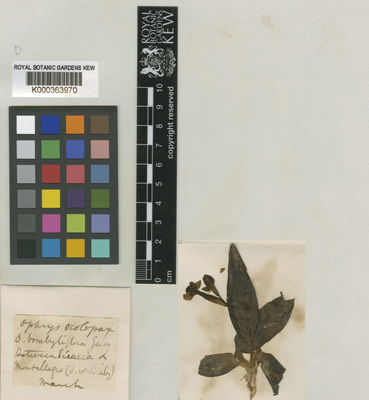