First published in J. Bot. (Schrader) 1799(2): 324 (1800), nom. cons.
This species is accepted
The native range of this species is Medit. It is a tuberous geophyte and grows primarily in the subtropical biome. 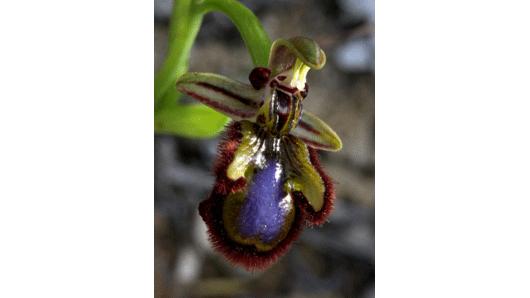 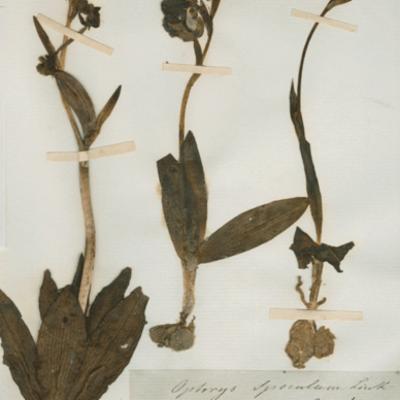 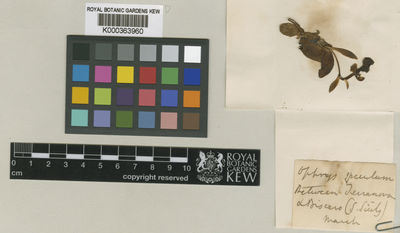 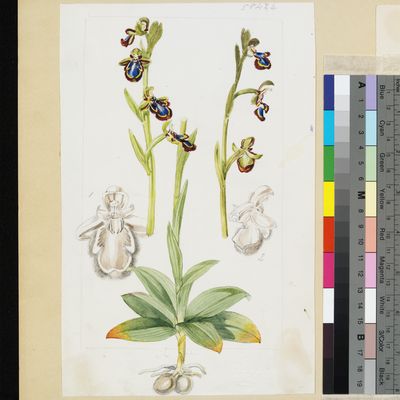 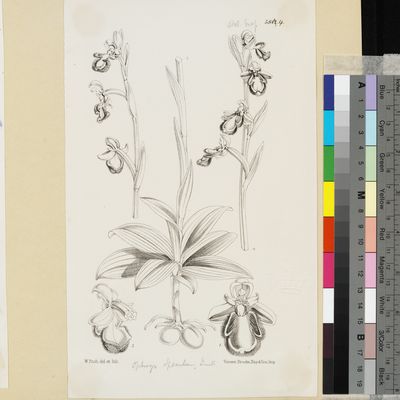 General Description
Ophrys speculum is a Mediterranean orchid that is pollinated exclusively by a single species of wasp.

Ophrys speculum is easy to recognise owing to its vivid blue, glossy, enamel-like lip, which is fringed with long, red-brown hairs. It is as if the flower reflects the sky of the Mediterranean, where this striking orchid is found; 'speculum' means mirror in Latin.

It is pollinated exclusively by the wasp Dasyscolia ciliata. Males are lured by the flower, which resembles the female wasp. The flower and wasp are both hairy and the blue patch on the lip appears to mimic the reflection of the sky on the wasp's wings. Moreover, the floral scent resembles the mating pheromones of the female wasps, and males become highly excited and try to copulate with the flowers, pollinating them in the process.

Ophrys speculum is widespread in the Mediterranean, from Portugal and Spain in the west to Turkey and Lebanon in the east and also in North Africa. However, it is absent from Cyprus and much of Italy, and is rare in France and Crete. It occurs up to 1,200 m above sea level.

Overview: A terrestrial orchid up to 25 cm tall.

Leaves: Rosette of leaves at the base of the inflorescence. Up to three sheathing leaves clasp the flowering stem.

Flowers: Each flowering stem bears 3-6 flowers (rarely up to 15). Sepals are up to 1 cm long, pale green and marked with reddish stripes. The much smaller petals are about 5 mm long, dark brown and bent backwards. The lip is three-lobed, 11-16 mm long, largely glossy mid-blue edged with yellow, and fringed with long, shaggy, red-brown hairs.

Mirror orchid usually flowers in March - April. It dies down during the summer and while dormant is present as an underground tuber. A new leaf rosette is formed in the autumn, and photosynthesis takes place during the winter months. As the flower stem emerges in the spring, the leaves begin to die.

Ophrys speculum is listed on Appendix II of CITES (Annex B within the European Union), which means that international trade is only allowed by special permit. Along with nearly all other orchids with distinct underground tubers, collection for salep production is the main threat.

The distinct underground tubers of many orchids, including Ophrys speculum , are collected for salep production in some eastern Mediterranean countries. Tubers are dried and ground to produce flour (salep), which is used to make desserts and drinks.

A collection of Ophrys speculum seeds is held in Kew's Millennium Seed Bank based at Wakehurst in West Sussex.

At Kew, mirror orchid is grown in an open polytunnel under indirect light. It is potted in a loam-based mix, to which Seramis (clay granules) and fine bark are added.

It is watered as needed to keep the compost damp when in growth, with watering reduced as the leaves and stem die back in the summer. It is kept dry during summer dormancy.

It is propagated using micropropagation (growing plants in a laboratory from seed or small pieces of tissue under sterile conditions, on specially selected media) but subsequent weaning (exposing plantlets to environmental conditions closer to those of their natural environment) is difficult. Ophrys speculum rarely multiplies vegetatively.

Mirror orchid is grown in the behind-the-scenes Tropical Nursery at Kew.

Dried and alcohol-preserved specimens of Ophrys speculum are held in Kew's Herbarium, where they are available to researchers from around the world by appointment. The details of some of these can be seen online in Kew's Herbarium Catalogue.

The number of species of bee orchids ( Ophrys species) that exist in Europe has been much-debated and was the subject of a recent project funded by the John S. Lewis Foundation, involving Kew scientists Dion Devey and Mike Fay, working alongside partners Richard Bateman (an independent scientist working mostly at Kew) and Julie Hawkins (Reading University).

The team used a wide range of molecular and morphological techniques in their field study of bee orchid populations across the Mediterranean region. They could discriminate only ten species of Ophrys , even when they applied all the available diagnostic markers, and even then only six groups proved to be consistently recognisable. Morphological analyses also showed significant overlap between populations that had previously been assigned to different species. The results of these studies will help scientists to more effectively prioritise populations for conservation.

Use
Food and drink.