First published in Sp. Pl.: 605 (1753)
This species is accepted
The native range of this species is Belgium to N. Spain and Central & S. Italy. It is a holoparasitic perennial and grows primarily in the temperate biome. 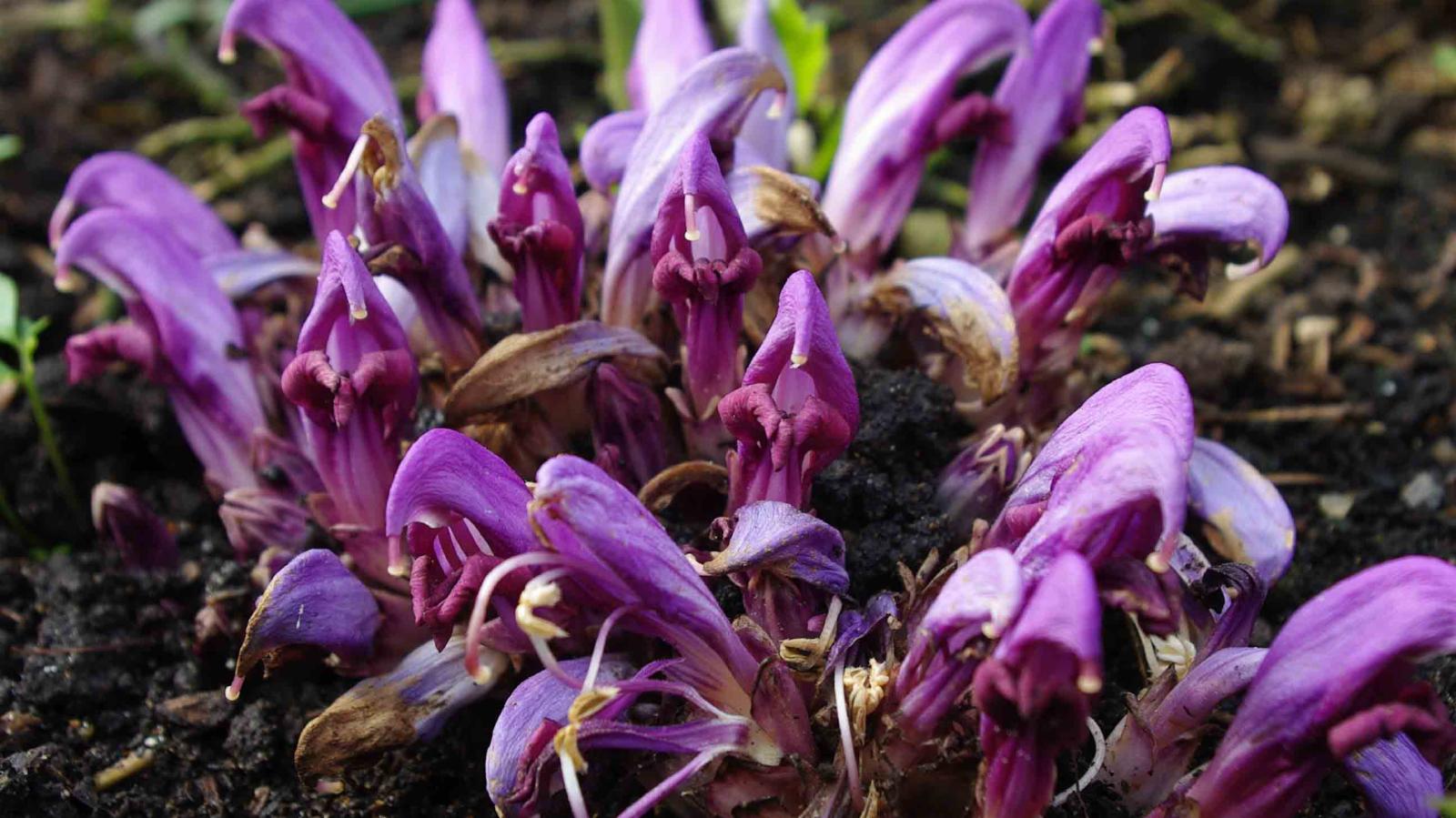 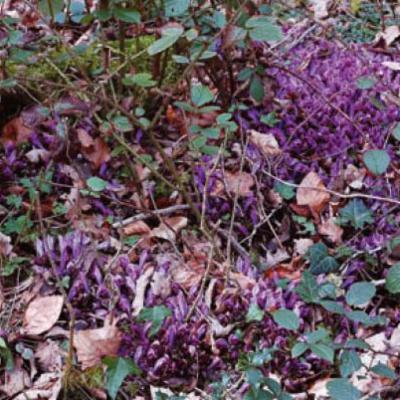 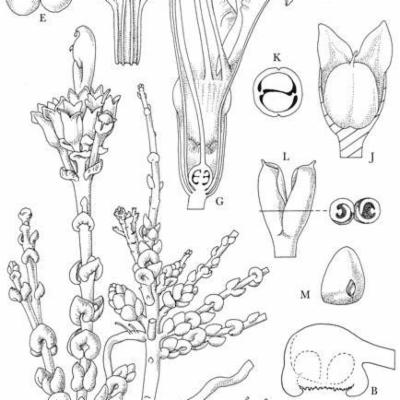 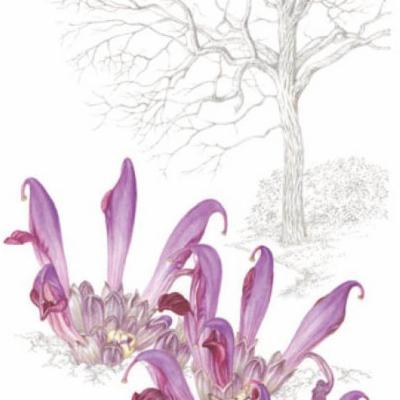 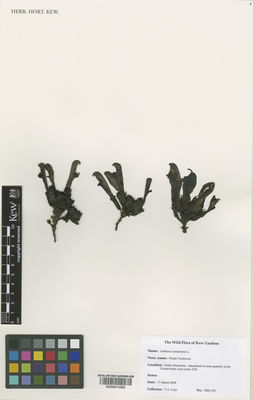 A root parasite found mainly on poplar (Populus) and willow (Salix), purple toothwort is also recorded as growing on a wide range of other plants in the wild and in cultivation, including Acer, Alnus, Buxus,Carpinus, Corylus, Juglans, Metasequoia, Rhododendron, Taxus and even Gunnera.

Lathraea clandestina is the only member of the broomrape family (Orobanchaceae) that is commonly cultivated as a garden plant. In addition to its decorative nature, being likened by some to purple crocuses, it is easier to cultivate than many related species, which are difficult to establish.

Purple toothwort is native to Belgium, France, Spain and Italy. It has been introduced and has become naturalised in a number of countries, including Britain and New Zealand. It was first reported from the wild in England in 1908 at Coe Fen (Cambridgeshire), where it still survives. By 2002, it had been recorded from numerous parts of England, Wales, southern Scotland and Ireland, often near stream and river margins where dispersal may be effected by flood water.

Lathraea clandestina is a perennial root parasite that lacks chlorophyll (the green pigment that allows plants to obtain energy from light). Its roots are yellow and tend to grow ahead of the rhizome (underground stem) at a gentle downward angle. The haustoria (suckers) at the tips of the roots attach to roots of the host plants, generally on the upper side, after which the parasite root continues to grow and connects to a number of host roots. The rhizome is cream-coloured with succulent scale leaves. There are no aerial stems. Scale leaves are borne on alternate sides of the stem and simple (not divided into leaflets), entire (have smooth margins), without stipules and sessile (borne directly on the stem with no leaf stalk). The flowers are bisexual and produce large amounts of alkaline nectar. The purple-violet petals are joined to form a tubular corolla of 40-50 mm, with upper and lower lips held nearly parallel to each other. The flowers contain four stamens and one style with two stigmas. The fruit is a two-valved, explosively dehiscing capsule with four to five seeds.

Several authors have alluded to unusual aspects of the biology of Lathraea clandestina . The French biologist Pierre Duchartre published a major study of the anatomy of L. clandestina in 1847, a copy of which he presented to William Hooker (the then Director of Kew), which is still in the Kew Library. Among other structures, Duchartre discussed in great detail the lacunae (cavities) found in the scale leaves, which he considered to show 'des pecularités fort remarquables' and which he thought could act as respiratory pockets, as had been suggested previously by the fern and moss enthusiast John Eddowes Bowman in 1833 for L. squamaria .

Others have suggested that these may facilitate carnivory, but this has been disputed by most subsequent authors.

The flowers are pollinated by bumblebees. The unusual chemistry of the nectar (highly alkaline, with a taste of ammonia) could be a defence mechanism that has evolved to deter marauding birds and ants, which could otherwise easily steal the nectar from the flowers at ground level without effecting pollination.

Purple toothwort grows best in semi-shade where the soil does not dry out completely and where roots of a likely host (for example poplar or willow) are present. It can be propagated from seeds scattered at the base of a suitable host tree or mixed with the soil as soon as the seeds are ripe. Alternatively, a small clump can be detached from the parent plant and placed near the roots of the chosen host by scraping away some soil and inserting the clump. Care should be taken as the roots can run deep and are extremely brittle. Scratching or lightly wounding the roots of the host may aid penetration by the haustoria. It should be mulched with leaf mould in autumn. Lathraea species are generally free from pests and diseases. Lathraea clandestina is fully hardy, but early flowers may be damaged by frost. It is not the plant of choice for instant effect in the garden as it is sometimes ten years before a flowering shoot emerges above the ground.

Purple toothwort was introduced to Kew Gardens in 1888. It can still be found growing at Kew Gardens as well as at Wakehurst. At Kew, it can be seen growing around the base of a large black walnut ( Juglans nigra ) at the south end of the Plant Family Beds, and also in the Conservation Area near Queen Charlotte's Cottage.

The related species, Lathraea squamaria (toothwort), was introduced to Kew even earlier (1834) and can be seen in several places in the Gardens, including at the base of a black walnut close to the Orangery.

Alcohol-preserved specimens of purple toothwort are held in the behind-the-scenes spirit collection in Kew's Herbarium. Details can be seen in the online Herbarium Catalogue. These specimens are made available to researchers from around the world by appointment.

Distribution
Belgium, France, Italy, Spain
Ecology
In moist places, parasitising the roots of a range of woody plants.
Conservation
Not considered to be threatened.
Hazards

None known, although the alkaline nectar has an unpleasant taste.