Khaosokia caricoides is a member of the sedge family (Cyperaceae) and was first discovered in 2001 in Khao Sok National Park, southern Thailand. It was initially overlooked, being mistaken for a common species in the genus Carex, until further collections were made in 2002. It was officially described as a new species (and a new genus) in 2005 by Kew botanist David Simpson, in collaboration with Kongkanda Chayamarit (Bangkok Forest Herbarium, Thailand) and John Parnell (Trinity College, Dublin, Ireland). 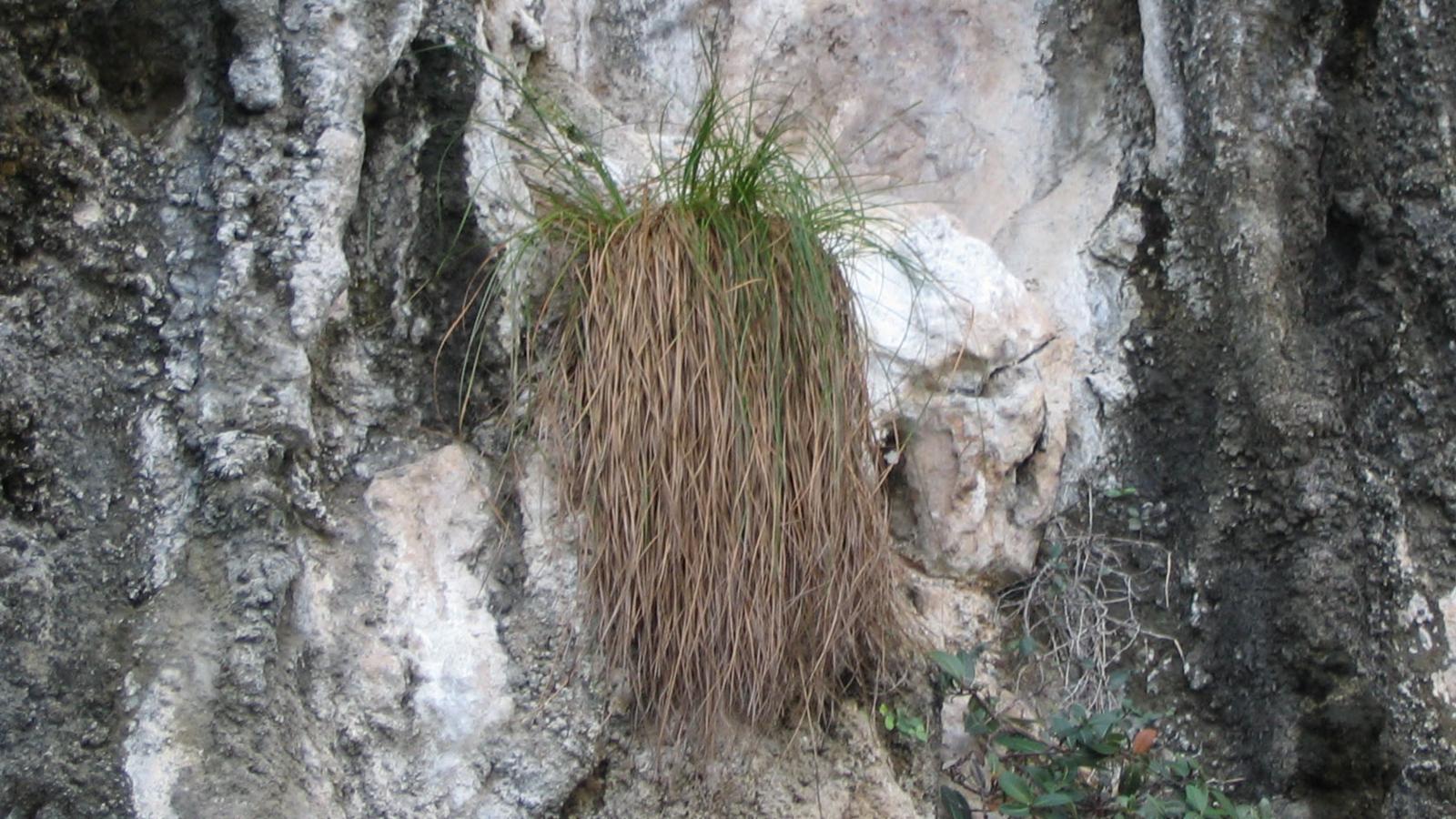 General Description
Khaosok sedge was discovered in 2001 on limestone cliffs, accessible only by boat, in southern Thailand.

Khaosokia caricoides is a member of the sedge family (Cyperaceae) and was first discovered in 2001 in Khao Sok National Park, southern Thailand. It was initially overlooked, being mistaken for a common species in the genus Carex, until further collections were made in 2002. It was officially described as a new species (and a new genus) in 2005 by Kew botanist David Simpson, in collaboration with Kongkanda Chayamarit (Bangkok Forest Herbarium, Thailand) and John Parnell (Trinity College, Dublin, Ireland).

The generic diversity of sedges in Asia is quite low so it was surprising to find a completely new genus in that part of the world. The area in which it occurs was flooded in the 1980s to form a reservoir. Ironically, although this resulted in the loss of many hectares of forest, it facilitated the discovery of K. caricoides. The flooding allowed access by boat to what were previously inaccessible cliffs, so effectively bringing the plant within reach of collectors.

Khaosok sedge is known from only one locality in Khao Sok National Park, southern Thailand. The plants were found scattered in crevices on sunny limestone cliffs, about 5 m above the water level of the reservoir, at about 60-80 m above sea level.

Khaosokia caricoides is a robust, tussocky, perennial with an underground stem (rhizome) and erect to drooping flowering stems. It has many crowded, drooping, narrow leaves.

The fruit is likely to be a minute nutlet (hardened, one-seeded fruit), but so far only immature fruits have been found.

Little is known about the biology of this plant. It is unusual in having either all male or all female inflorescences (dioecious), a rare condition in the sedge family (Cyperaceae). As with most sedges it is most likely to be wind-pollinated.

Relationships within the sedge family

Kew scientists David Simpson and Mark Chase are part of a team which has been looking into the phylogeny (evolutionary history) of the sedge family (Cyperaceae) based on genetic data.

DNA sequencing studies suggest Khaosok sedge is closely related to genera such as Carex (true sedges), Eriophorum (cotton grasses) and Trichophorum (deer grasses). It is also related to the North American genus Dulichium . The most recent study suggests that it is a sister-group to all these other genera.

There is no information about the abundance or distribution of Khaosokia caricoides beyond the one known locality in Khao Sok National Park. Its occurrence in a protected area, and its relative inaccessibility on limestone cliffs surrounded by water, may assist in its conservation. However, the plant has been seen in only small populations on only a few cliffs, despite the fact that the habitat appeared to be suitable on other cliffs in the vicinity. It could be present in similar habitats elsewhere in Thailand and Peninsular Malaysia but is so far inaccessible to collectors.

Such habitats are often threatened by human activity, especially limestone extraction. However, human activity is unlikely to threaten the known locality for Khaosok sedge, because the reservoir, and the locality's occurrence in a national park, offer protection. Other populations, if they exist, could be under pressure.

Khaosok sedge may also be vulnerable to climate change. Should the climate become drier, reduced rainfall could adversely affect this species. As far as is known, rain falling directly onto the cliffs, together with associated runoff, is the only source of water for this plant. Unfortunately we know very little about its ecological requirements and whether it can tolerate extended periods of drought.

Khaosokia caricoides comes from a part of Thailand that has yielded several new taxa in recent years, including the palm Maxburretia furtadoana and the bamboo genus Temochloa . All have been found growing in a similar habitat to Khaosokia , emphasising the species richness of these limestone areas.

Pressed and dried specimens of Khaosokia caricoides are held in the behind-the-scenes Herbarium at Kew, where they are made available to researchers from around the world, by appointment. The details, including images, of some of these specimens can be seen online in the Herbarium Catalogue. 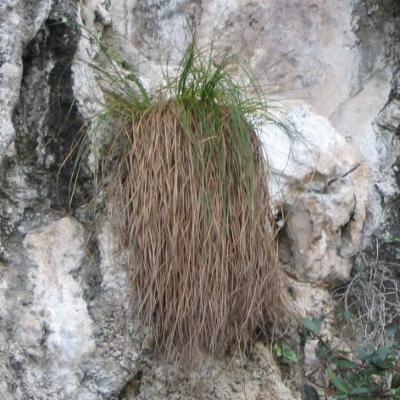 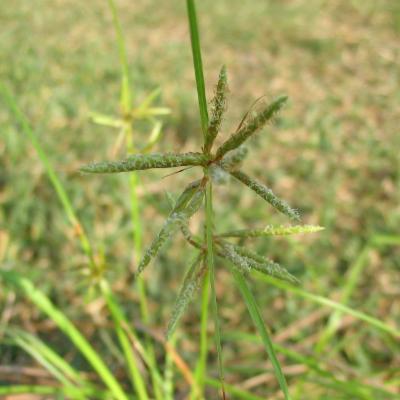 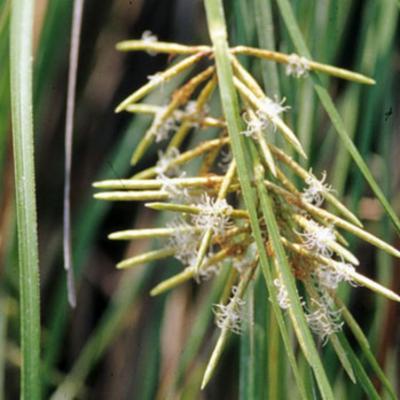 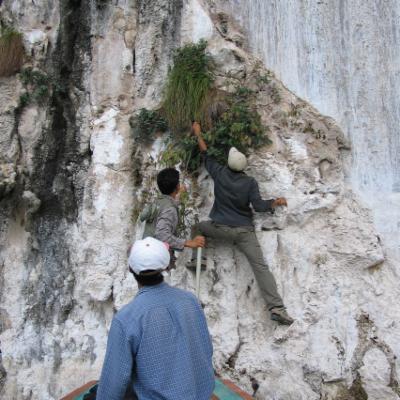 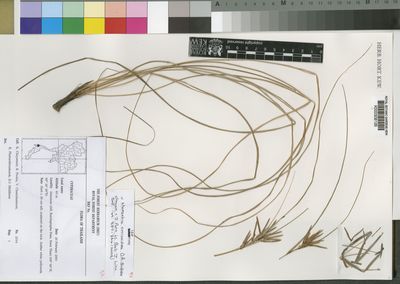