Vachellia nilotica has been used since early Egyptian dynasties. Disocorides (the Greek philosopher, physician and 'father of botany' c.40 to 90 A.D.) described in his Materia Medica a preparation extracted from the leaves and fruit pods. He called this 'akakia', and it is from this word that the modern name is derived. The origin of the previous name for the genus was Acacia which means 'spiny' and is a typical feature of the species. 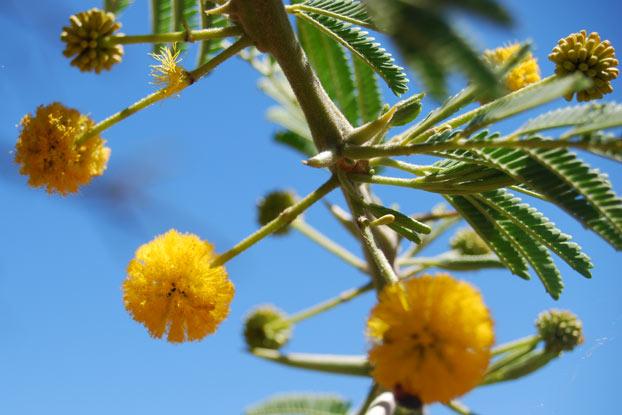 Vachellia nilotica has been used since early Egyptian dynasties. Disocorides (the Greek philosopher, physician and 'father of botany' c.40 to 90 A.D.) described in his Materia Medica a preparation extracted from the leaves and fruit pods.

He called this 'akakia', and it is from this word that the modern name is derived. The origin of the previous name for the genus was Acacia which means 'spiny' and is a typical feature of the species.

Acacia nilotica is widespread in subtropical and tropical Africa from Egypt to Mauritania southwards to South Africa, and in Asia eastwards to Pakistan and India.

It has been introduced in China, Australia (in Northern Territory and Queenslandwhere it is considered to be a pest plant of national importance), the Caribbean, Indian Ocean islands, Mauritius, the United States, Central America, South America and the Galápagos Islands. It has naturalized in several countries where it has been introduced as a medicinal, forage and fuelwood plant.

Some African subspecies occur in wooded grassland, savanna and dry shrub forest. Other subspecies are restricted to riverine habitats and seasonally flooded areas. The subspecies  nilotica  is adapted to periodic flooding followed by extended droughts. It grows at up to 1,500 m above sea level, although only to 500 m in the Himalaya mountains. It grows best in alluvium soil but also grows well on heavy clay soil with a pH range of 5 to 9.

There are nine subspecies of Acacia nilotica , which occur in Africa (two in southern Africa), India and Pakistan.

Overview: A small to medium tree, 7 to 13 m tall, with a stem diameter of 20 to 30 cm. The crown is low, spreading and almost symmetrical, and can be flattened or a rounded umbrella-shape (in free standing specimens). The bark is very dark brown to black with deep regular vertical grooves in older specimens. The thorns are almost straight, paired at the nodes of the stem and usually pointing slightly backwards.

Leaves: The leaves are bipinnate, 4.5 to 7 cm long, with 2 to 14 pairs of pinnae. The leaflets are 1.5 to 7 mm long. The trees generally lose their leaves during the dry season, though riverine subspecies can be almost evergreen.

Flowers: The flowers are bright yellow and borne on globe-shaped flower heads. The flowers are sweetly scented and appear near the beginning of the rainy season. Flowering is prolific, and can occur a number of times in a season. Often only about 0.1% of flowers set pods.

Fruits: The nutritious pods retain their seeds at maturity and are dispersed by animals. The pods are compressed, slightly curved, and vary from slightly constricted to almost rosary-like (like a string of beads). The pods are smooth or covered with fine hairs. A mature tree can produce 2,000 to 3,000 pods in a good fruiting season, each with eight to sixteen seeds, yielding 5,000 to 16,000 seeds per kg, depending on the subspecies.

Acacia nilotica is a pioneer species, easily regenerated from seed, and is not considered to be threatened. It can become a weed when introduced out of its native range, particularly in more humid zones. Thorniness can be a problem when introduced to areas where people do not traditionally use thorn trees.

A wide range of pests and diseases affect this species. The stem borer Cerostema scabrator is a pest of economic importance on young plantations in India. Euproctis lunata and E. subnotata occasionally defoliate patches of forest in Sukkur and Hyderabad. In Africa, bruchid beetles attack the seeds, destroying up to 70% of them. Buprestid beetles cause a dieback disease in Sudan. Fungal rots ( Fomes papianus and F. badius ) attack unhealthy trees, and powder-post beetles ( Sibixylon anale and Lyctus africanus ) attack the sapwood of felled timber. Many wild mammals feed on the seed pods and a large number of insect species attack the mature seeds.

Acacia nilotica has a wealth of medicinal uses. It is used for stomach upset and pain, the bark is chewed to protect against scurvy, an infusion is taken for dysentery and diarrhoea. In Nigeria it is one of the standard drugs for treating diarrhoea. It has also been used to eliminate stomach worms, as an antiseptic for open wounds and as an expectorant for treating coughs. The species has also been used in veterinary medicine, for example as a molluscicide to reduce liver-flukes in cattle.

Gum is present in the bark and tends to be dark in colour. This species may indeed have been the original source of true gum arabic which is now obtained commercially from Senegalia senegal . The Acacia nilotica gum, samogh or samuk (arabic) is sold in balls and is commercially of inferior quality. It has been used as an emulsifying agent and emollient. It is edible and is used to relieve throat and chest complaints.

The pods are desirable as fodder for cattle, and the leaves, young shoots and young pods are thought to aid milk production.

Acacia nilotica wood burns without too much smoke and provides good charcoal. The flowers provide pollen and nectar for bees. This species is suitable for live fencing, mine timber, railway sleepers, boat building, wheels, and water wells as its wood is durable and resistant to borers and termites.

The sap-wood and heart-wood was used in ancient Egypt for house beams, furniture, panelling and statues as it was regarded as impervious to insect and fungus attack. The bark contains tannins and has been used to preserve and soften leather. Phytochemical analysis has shown the presence of two types of tannin (gallotannins and catechins) which explain its therapeutic action as well as its use in tanning hides.

Babul (subspecies indica ) is a popular farm tree of the central plains of India. More recently, interest has centred on the fastigiate form (subspecies cupressiformis ). This subspecies makes an ideal windbreak to surround fields as its narrow crown shades less than other windbreak species.

In shamanism Acacia nilotica has been used to drive away evil spirits.

Kew's Millennium Seed Bank partnership aims to save plant life world wide, focusing on plants under threat and those of most use in the future. Seeds are dried, packaged and stored at a sub-zero temperature in our seed bank vault.

A collection of Acacia nilotica seeds is held in Kew's Millennium Seed Bank based at Wakehurst in West Sussex.

Subcircular in outline, 6-9 x 5-8 mm, the two faces of the seed with a U-shaped pleurogram surrounding an areole 5-7 x 4-7 mm. The seed is free of tannins, but contains mucilage and sugars. They also contain a dark yellow oil at a concentration of 5.46%.

Seed from natural populations of some subspecies are available from India and some Sahelian countries. A broader range of germplasm and Rhizobium inoculum , is available from the Oxford Forestry Institute (Oxford OX1 3RB UK) for field trials.

Acacia nilotica is a slow-growing species but is moderately long-lived. It is easily established from seed, but needs scarification (the hard seed coat must be subjected to mechanical abrasion or hot water treatment), especially if seeds are not fresh. Seeds generally germinate quickly (7-15 days). Seedlings need full exposure to sunlight and a free-draining soil.

This species will tolerate only light frost, but is extremely resistant to drought and heat. It is also tolerant of saline soil. Young trees coppice well, and this species can be propagated from truncheons, root suckers and cuttings. Some subspecies can be invasive (and can be extremely invasive in exotic habitats). The species can be direct seeded or established by seedlings. In the nursery long poly-tubes (20 x 7 cm) should be used so as not to restrict rapid tap root growth. Frequent root pruning is advised. Nursery grown seedlings are usually planted out after six months, but in some cases stay in the nursery for up to a year. Establishment varies depending on the site. Seedlings are shade intolerant.

In irrigated plantations in the Sind and Punjab, 10-15 seeds are spot sown at 2 x 3 m spacing on the tops of trenches. They are thinned to three to four seedlings after three to four months. Further thinning occurs at five year intervals. Rotations are 20-25 years. In the Thal desert, Pakistan (where there is 250 mm annual rainfall), promising growth resulted from irrigation at ten day intervals. Growth rates varied considerably depending on the sites, with maximum mean annual increment of 13 m3 /ha at 20 years old and 10.5 m3 /ha at 30 years recorded.

Preserved specimens of Acacia nilotica  seeds, flowers, fruits, gum, wood and bark are held in Kew's Economic Botany Collection, where they are available to researchers by appointment.

The leaves and fruits can be poisonous if eaten in large quantities. 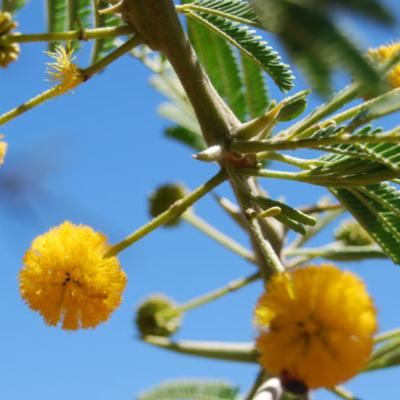 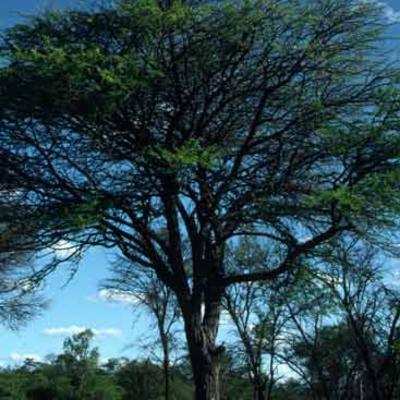 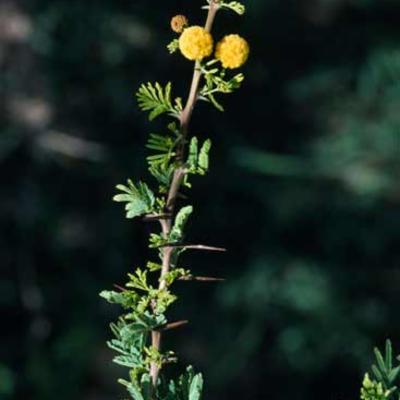 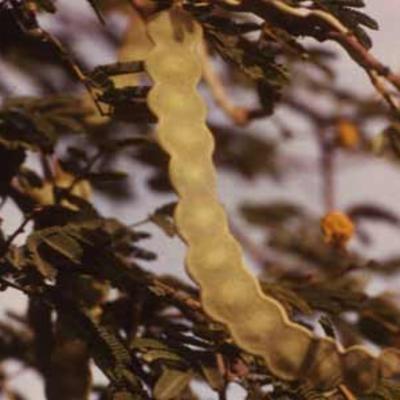 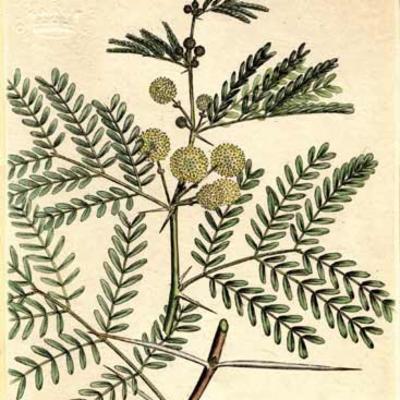 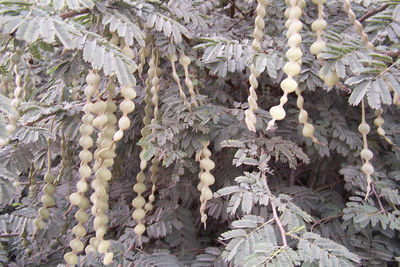 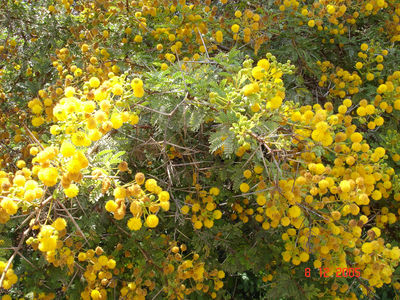 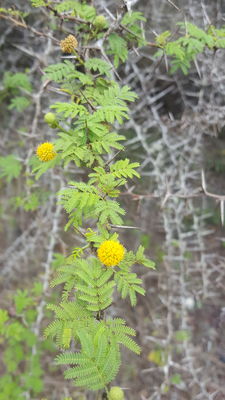 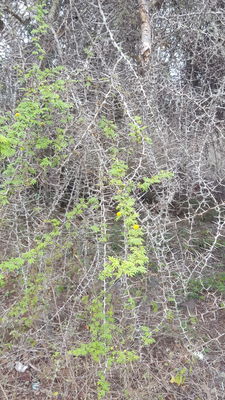 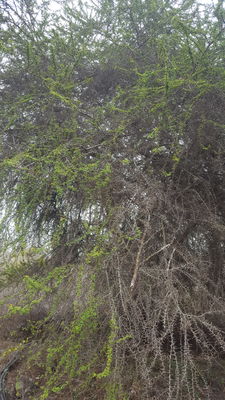 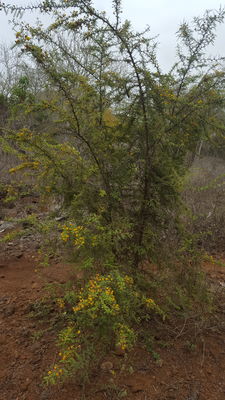 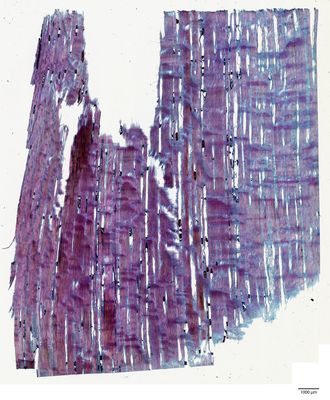 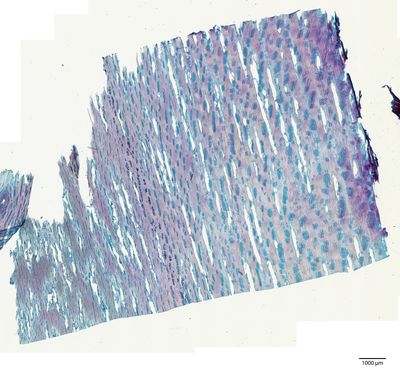