Despite having large tubers weighing up to 5.5 kg, distinctive vegetative and floral morphology and being an especially sought-after food plant, the yam species known as 'bako' in the Sakalava language has only just been formally described by botanists. 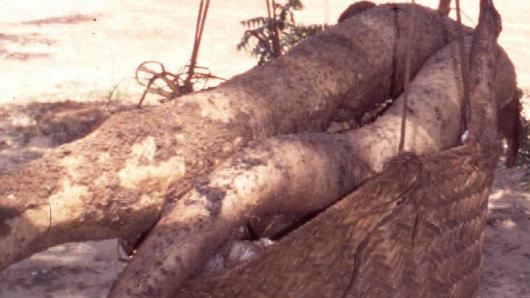 Despite having large tubers weighing up to 5.5 kg, distinctive vegetative and floral morphology and being an especially sought-after food plant, the yam species known as 'bako' in the Sakalava language has only just been formally described by botanists.

It was collated by Mamy Tiana Rajaonah, Vololoniaina Jeannoda and Kew's Paul Wilkin during work on the 'Yams of Madagascar' project, a collaborative research programme of the Département de Biologie et Ecologie Végétales, Université d'Antananarivo and Kew.

Its exploitation as a favoured starch source, coupled with its restricted distribution, place it under significant threat of extinction. Research is underway on the conservation of bako, ensuring that future use is sustainable, but the work needs more resources.

Dioscorea bako is restricted to deciduous forests near Morondava in western Madagascar.

Dioscorea bako is a stem-twining herbaceous vine with male and female flowers on separate plants (like most Dioscorea species) to 5 m in height. Its tubers can attain 1.5 m in length and 5.5 kg in weight.

Above ground, its leaf lower surface is greyish-green and the leaf margins usually shallowly and irregularly lobed. Its male inflorescences are borne on short specialised leafless shoots towards the stem base, and possess dense, overlapping hairy bracts for most of their length, giving a catkin-like appearance. The small and inconspicuous flowers are found between the bracts.

Female flowering plants have not yet been seen, but the capsular fruits are 3-winged and obovate (egg-shaped with the narrow end at the base) to narrowly obovate-oblong in outline, and contain basally winged seeds like most of the species' close relatives in Madagascar.

The conservation status of Dioscorea bako has been assessed as Endangered based on IUCN (International Union for Conservation of Nature) criteria.

Bako is a favoured starch source in the area around Morondava in western Madagascar where it occurs. The people of the region report that it is becoming harder to find, probably because it has been over-extracted. It is also threatened by habitat loss.

Efforts to conserve this species have begun, but the level of threat to this species is high. Like many of the edible wild yams of Madagascar, a biodiversity hotspot, it is found in just a small area of this large continental island but is of great local value and importance as a source of food.

At least 12 of the other 30 (approximately) edible yam species in Madagascar are threatened, highlighting the need for a country-wide yam conservation programme as a step towards food security.

The tuber is a source of starch; the constituents are cut into pieces, boiled, and eaten as a main meal or snack.

Dioscorea bako is known only from the wild, but cultivation experiments have been attempted in the last few years as a means of conservation.

Use
The tuber of Dioscorea bako is edible and, with D. maciba Jum. & H. Perr., is the favoured yam of people of the Morondava region (Jeannodaet al.2003, 2007; Rajaonah2004). The tubers, which reach maturity in April, are peeled, washed, and cut into c. 12 – 20 or 2 – 4 cm long pieces. These are boiled in water deep enough to cover them and served with either fish or honey as a main meal or alone as a snack. The larger pieces are called sambaiky in Sakalava when cooked, whereas the smaller, which have a softer consistency, are called katokato (Rajaonah2004). 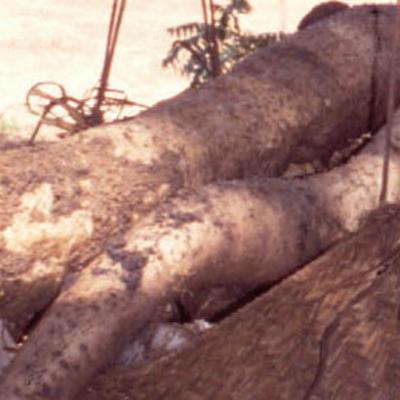 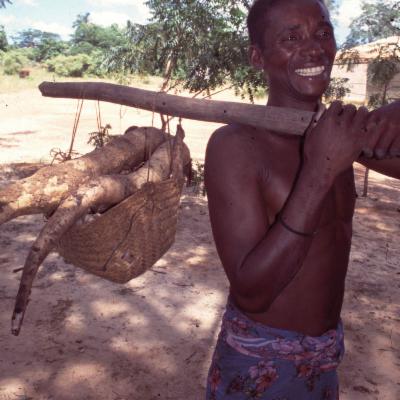 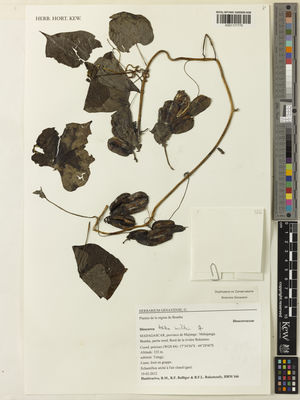