Callicarpa argentii was first collected in 1994 by George Argent, a botanist from the Royal Botanic Garden Edinburgh, during vegetation survey work in Kalimantan, the Indonesian part of the island of Borneo. 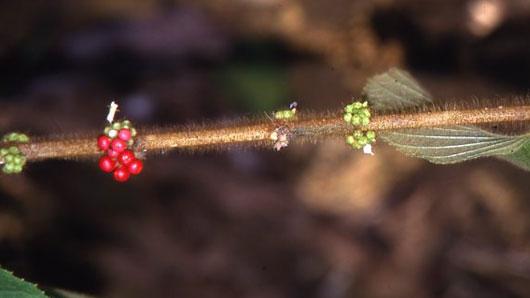 Callicarpa argentii is one of four new species of Callicarpa recently described from the island of Borneo.

It was only recognised as a new species when Callicarpa became the research focus of Dr Gemma Bramley, a botanist in Kew's Herbarium. Gemma studied the taxonomy of Callicarpa as part of the Flora Malesiana project, which aims to document and describe the flora of Indonesia, Malaysia, the Philippines, Papua New Guinea, Singapore and Brunei Darussalam. In 2009, she published a paper describing the 23 species of Callicarpa on Borneo, four of which were new to science.

Callicarpa is a genus in the mint family (Lamiaceae), but it is more closely related to the important timber tree teak (Tectona L.) than the culinary herbs such as mint and basil for which the family is so well known.

Callicarpa argentii is restricted to the province Kalimantan Tengah (Central Kalimantan), in the Indonesian part of the island of Borneo.

Overview: This rainforest species is a small tree, 3 to 10 m tall.

Leaves:  The twigs and leaves have patent red-brown hairs and red or yellow glands. The leaves are elliptical to obovate (egg-shaped with the narrow end at the base) with toothed margins.

Flowers: The flowers are white and tubular with four lobes, and the calyx has red-brown hairs. There are four stamens, which are shortly exserted from the flower.

Fruits: The fruit is fleshy and green when young, then red when mature, with eight one-seeded segments.

Callicarpa argentii is known from areas of forest in Central Kalimantan where logging is taking place, or had taken place at the time of collection. It was observed by George Argent (Royal Botanic Garden Edinburgh), the botanist after whom the species is named and the collector of the type specimen. He found this species regenerating in the secondary regrowth at the side of a logging road.

These habitats are very mobile and often transient so although it was abundant when he collected it, it could easily disappear with subsequent colonisation. It is for this reason, and because it is known from an area less than 5000 km² in size, that the IUCN conservation status for C. argentii is 'endangered'.

The genus Callicarpa at Kew

Several relatives of Callicarpa argentii , originating from Indochina, China and Japan, can be found growing in the Gardens.

If you are lucky enough to see these plants in the autumn, you will notice their striking bright purple fruits. With this in mind it is easy to see why the genus got its name, Callicarpa, which means 'beautiful fruit'. 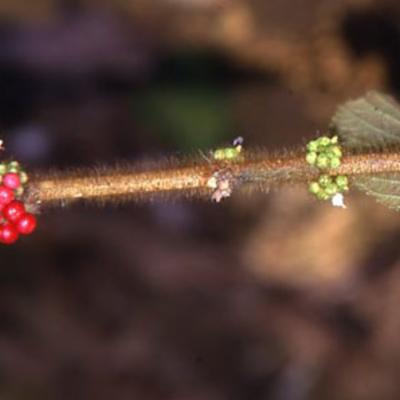 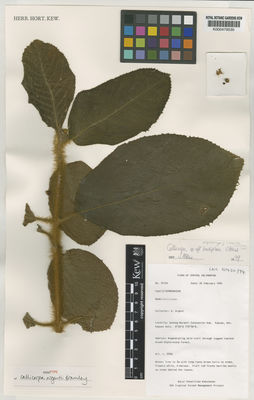