Encholirium agavoides is a silver-leaved bromeliad which occurs in a very specific habitat, within an area of less than 10 km². It resembles to Agave, with rosettes of spiny-edged leaves up to 12 cm wide. 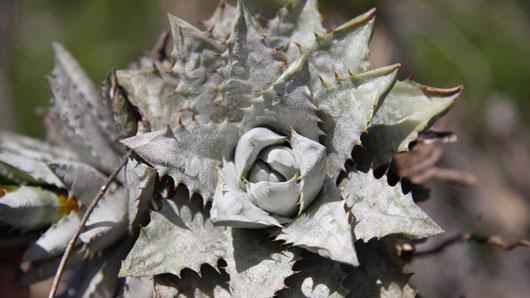 Encholirium agavoides is a silver-leaved bromeliad which occurs in a very specific habitat, within an area of less than 10 km². The population of this species is just 10 - 12 km away from another new species (E. ctenophyllum). These two species are separated by the steep descent to the gorge of the Rio das Pedras. This river divides the municipalities of Santana de Pirapama (where E. agavoides is found) and Santana do Riacho (where E. ctenophyllum occurs).

Encholirium agavoides is restricted to the state of Minas Gerais, Brazil. This species is a narrow endemic, occurring only in a very limited area on the west slope of the Serra do Cipó, at or around 1,500 metres above sea level. It is found forming large populations growing on top of flat to slightly inclined arenitic/quartzitic rocks.

Of the 23 species of Encholirium , nine are restricted to the 'campos rupestres' of the Cadeia do Espinhaço in Minas Gerais, and seven of these are narrow endemics in the region of Diamantina and Serra do Cipó. The discovery of more narrowly endemic species in this relatively well explored area of the Cadeia do Espinhaço highlights the complexity of the micro-habitats and the high plant diversity and endemism of the 'campos rupestres'.

This striking new silver-leaved species of bromeliad bears a resemblance to an agave. It has rosettes of leaves up to 12 cm wide, with silvery-white, triangular leaves that are spiny along the edges.

The green to yellowish flowers are borne in terminal spikes and are densely packed at the end of the inflorescence (flower-bearing structure).

The fruits are brown and capsular, with minute seeds. This species is thought to be pollinated by insects, and the seeds dispersed by the wind.

This plant is a narrow endemic (occurs only in a very limited area) and is hence vulnerable to climate change, fire and habitat destruction.

The leaves of this species are spiny at the edges. 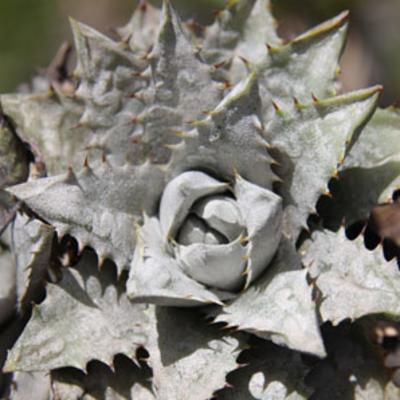 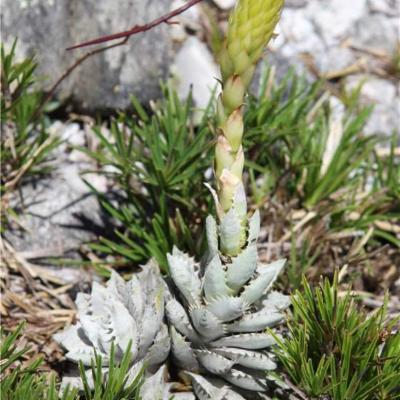 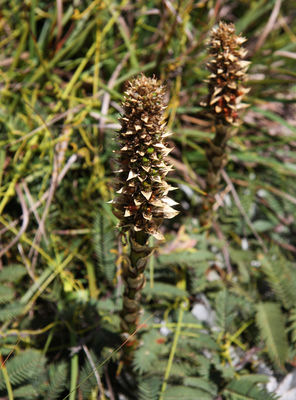 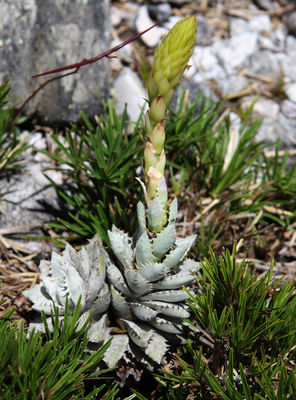 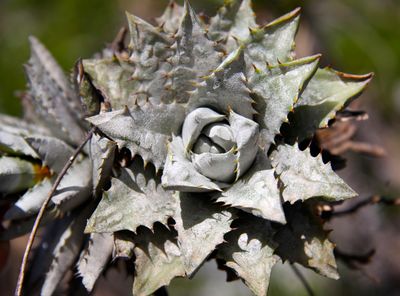 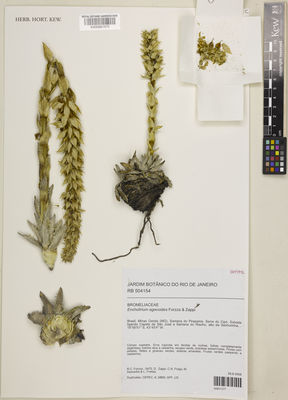