This species is accepted, and its native range is New Caledonia (Mt. Tchingou). 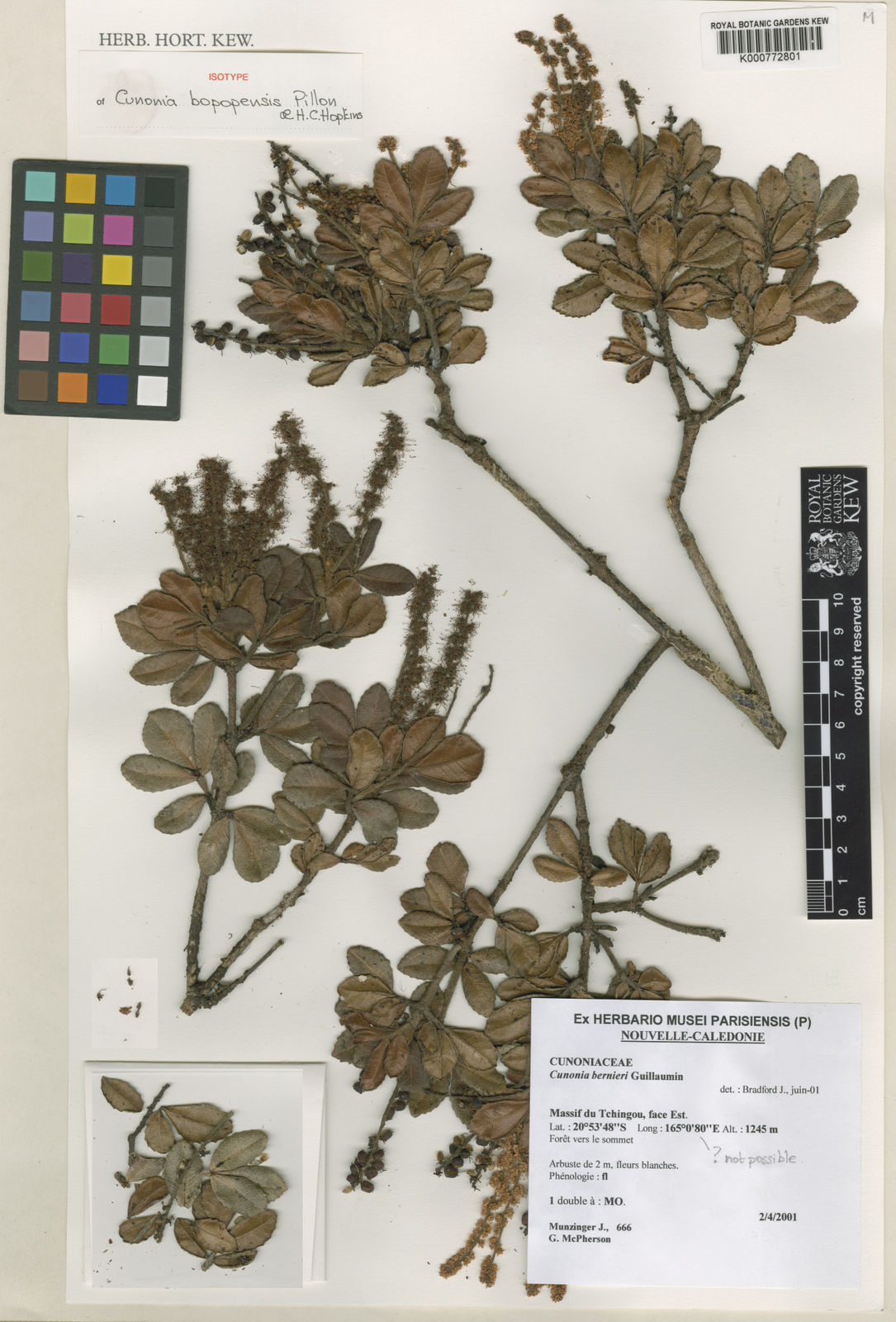 The ovary of Cunonia is usually illustrated and described as bilocular with axile placentation, i.e. 2-carpellate with the placentas connate (e.g. C. balansae Brongn. & Gris, fig. 130 and C. pterophylla, fig. 132, both in Dickison 1984; Hutchinson 1967). However, some flowers and fruits of C. bopopensis have a 3-carpellate ovary (Fig. 1M), a condition noted by Hoogland (unpublished) as absent or rare in most species of Cunonia, although found by him in C. rotundifolia Däniker and C. pulchella Brongn. & Gris. In addition, Hoogland noted flowers with four carpels in a few collections of C. pulchella and in a study of 20 collections he found that the percentage of flowers with two, three or four locules varied from 100/0/0 (McPherson 3171) to 20/74/6 (MacKee 21544); flowers with four carpels were also found in one collection of C. cerifera Hoogland (MacKee 35515).

Cunonia bopopensis has the distinctive combination of imparipinnate leaves with a winged rachis and normally five or seven leaflets, the terminal one broader than the laterals, and white flowers. It has a dense indumentum of wavy hairs on the young stems and stipules, sparser hairs on the leaves, and small hairs on the inflorescences.

Baillon (1874) noted that the expanded edges of the placentas in Cunonia can remain separate, in which case the ovary is unilocular with parietal placentation, but typically near the base the placentas are connate, although they may start to separate distally (Fig. 1J – L) (see also Brongniart & Gris 1873; Dickison 1975: fig. 22a – d, C. vieillardii Brongn. & Gris).

To our knowledge, only two species have so far been reported as restricted to Mt Tchingou: Soulamea moratii Jaffré & Fambart (Simaroubaceae, Jaffré & Fambart 2002) and Rapanea tchingouensis M. Schmid (Primulaceae, previously Myrsinaceae, Schmid 2009). However, we are aware of species in several genera, including Acropogon (Malvaceae, formerly Sterculiaceae), Coronanthera (Gesneriaceae), Nothofagus (Nothofagaceae) and Pittosporum (Pittosporaceae), that have similar distributions and are awaiting description or are in the process of being described. Most collections from Mt Tchingou were made from the 1980s onwards so little material from this mountain was available for the earliest revisions published in the Flore de la Nouvelle-Calédonie et Dépendances, and this probably explains why few micro-endemics from this mountain have been described so far. The presence of micro-endemics on Mt Tchingou and the fact that the vegetation of its upper slopes has been little altered by humans suggest that this massif is an important area for the conservation of the New Caledonian flora.

The affinities of this new taxon are not clear but morphologically the closest species are probably Cunonia lenormandii and C. pterophylla. C. bopopensis has leaves quite similar to those of C. lenormandii, although the latter normally have only three leaflets, and the two differ in flower colour (red in C. lenormandii, white in C. bopopensis). Both occur on ultramafic substrates and C. lenormandii is widespread in New Caledonia, occurring in forest and maquis over a range of elevations (especially 400 – 1200 m). The indumentum and colour of the leaves in C. bopopensis are reminiscent of C. pterophylla but the leaflets of the latter are more numerous (nine or more per leaf) and smaller (< 2 cm long). C. pterophylla occurs in forest or occasionally maquis on ultramafic soils in southern Grande Terre, from 250 – 1350 m, and like C. bopopensis, it has white flowers.

The seeds of Cunonia bopopensis are flattened-ellipsoid with a somewhat irregular wing expanded at one end, small at the opposite end and narrow along one side (Fig. 1N), and similar seeds have been illustrated in other species (C. purpurea Brongn. & Gris, fig. 44, and C. macrophylla Brongn. & Gris, fig. 46, both in Dickison 1984; C. koghicola H. C. Hopkins, J. Bradford & Pillon, fig. 4 K, in Pillon et al. 2008). However, sometimes seeds in Cunonia are more angular, with the wing not or only slightly developed (Brongniart & Gris 1873); such seeds are not necessarily non-viable, although their ability to disperse is likely to be reduced (B. Fogliani pers. comm.).

Endemics restricted to Mt Tchingou are expected for two reasons. First, it is the highest mountain in this part of north-central New Caledonia and it is relatively distant from the Panié range (maximum elevation 1629 m) and higher than both the Ton-Non massif, which includes Roche Ouaïème (986 m), and the closer Massif des Lèvres (1076 m). Second, like Oua-Tilou to the north-west and Mt Grandié to the south-east, the upper part of Mt Tchingou has ultramafic soils, whereas most of the surrounding mountainous areas, including the Massif des Lèvres to the north-east, have non-ultramafic substrates, derived from metamorphic or sedimentary rocks. Mt Tchingou is thus somewhat comparable to an inselberg, because although this massif does not arise from a flat plain, at high elevation it offers ecological conditions that are markedly different from those of its surroundings.

Cunonia bopopensis is one of a handful of species in this genus in New Caledonia that is restricted to no more than a few mountain tops, and this type of distribution is also seen in the closely related genus Pancheria (Bradford & Jaffré 2004; Hopkins et al. 2009), as well as in Beauprea (Proteaceae, Virot 1968), Dracophyllum (Ericaceae, Virot 1975) and Metrosideros (Myrtaceae, Dawson 1992). All five genera have, for example, rare montane micro-endemics on northern, non-ultramafic mountains (Panié range, Roche Ouaïème, Massif des Lèvres, see Bradford & Jaffré 2004) and on southern, ultramafic mountains (Mt Humboldt, Mt Kouakoué, Montagne des Sources, see Munzinger et al. 2008). 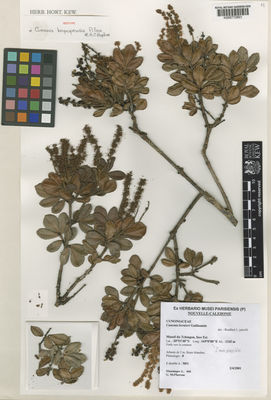