Nepenthes robcantleyi was described as a new species by Kew scientist Martin Cheek in 2011, after he was presented with material from a plant known as Nepenthes 'Queen of Hearts', which had been displayed at the Royal Horticultural Society Chelsea Flower Show. Cheek named the species in honour of Robert Cantley of Borneo Exotics, who first discovered it in the wild, grew plants to maturity from seed, and multiplied them for distribution and future re-introduction to the wild. A carnivorous plant, Nepenthes robcantleyi has large pitchers (about 30 cm long) that trap invertebrates and possibly small mammals and reptiles, which are then digested in the acidic fluid, providing nutrients for the plant. 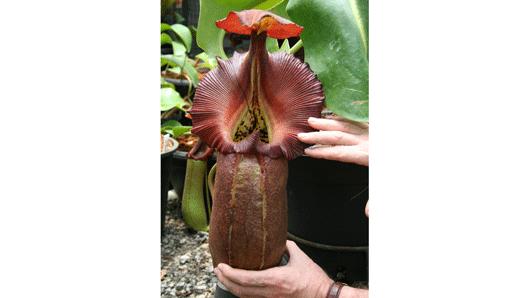 Nepenthes robcantleyi was described as a new species by Kew scientist Martin Cheek in 2011, after he was presented with material from a plant known as Nepenthes 'Queen of Hearts', which had been displayed at the Royal Horticultural Society Chelsea Flower Show. Cheek named the species in honour of Robert Cantley of Borneo Exotics, who first discovered it in the wild, grew plants to maturity from seed, and multiplied them for distribution and future re-introduction to the wild. A carnivorous plant, Nepenthes robcantleyi has large pitchers (about 30 cm long) that trap invertebrates and possibly small mammals and reptiles, which are then digested in the acidic fluid, providing nutrients for the plant.

Nepenthes robcantleyi has only been recorded in a single location in submontane evergreen forest, in Mindanao, Philippines, at about 1,800 metres above sea level.

Unusual discovery of a new species

Unlike many plants that are first discovered by a botanist carefully exploring new territory, Nepenthes robcantleyi had been seen and photographed by thousands of people before it was determined to be a new species.

In January 1997, Robert Cantley of Borneo Exotics plant nursery obtained permission to collect seeds in a logging concession in Mindanao, Philippines. There he came across two plants that he thought to be unusual forms of Nepenthes truncata and managed to collect a few of their seeds.

Back in his nursery, Cantley raised nine seedlings, which at maturity were found to match the photographs he had taken of the wild parents. The pitchers were darker than those commonly found on N. truncata , and some had an almost black peristome (collar around the opening of pitcher). They were exhibited at flower shows as 'the black N. truncata ', and given the cultivar names Nepenthes 'King of Spades', Nepenthes 'King of Hearts' and Nepenthes 'Queen of Hearts'. These plants were part of Borneo Exotics displays that won gold medals at RHS Chelsea Flower Shows and were hence seen by hundreds of thousands of visitors.

When he realised that these plants differed significantly from N. truncata , Cantley presented material to Kew scientist Martin Cheek, who subsequently described it as a new species, Nepenthes robcantleyi , in 2011.

Overview: A terrestrial shrub up to 1 m tall, not known to climb. Stem circular in cross-section, about 2 cm in diameter.

Leaves: Leathery, up to about 28 × 26 cm, with winged petiole (leaf stalk), the wings rolled inwards, one over the other with 2-4 conspicuous longitudinal nerves on each side of the midrib.

Pitchers (modified parts of leaves): Broadly cylindrical, about 30 cm long and 9 cm wide, with two conspicuous fringed wings (always present in the largest pitchers). Peristome (collar around the opening) dark red, up to 9 cm wide at the rear of the pitcher, flattened, ribbed with toothed edges. Ribs wing-like in section, 1-2 mm apart. Lid about 9 cm in diameter, held more or less horizontally on a short stalk. Nectar glands thinly scattered across underside of lid with dense cluster around the basal appendage.

Insects are believed to be attracted to nectar produced by large glands covering the pitchers, especially on the lower surface of the pitcher lid. The ridged and toothed edge (peristome) of the pitcher makes it difficult for any animals that fall in to climb back out. They usually die inside the pitcher, drowning in the liquid secreted in its lower half, where they are then broken down by digestives enzymes into nutrients that become available for use by the plant.

Nepenthes robcantleyi has been independently assessed as Critically Endangered according to IUCN Red List criteria, as it is known from only a single location in the wild, where only two plants were seen. This area has been subject to commercial logging, and the species has not been seen since the first sighting, leading to fears that it could already be extinct in the wild.

Borneo Exotics plant nursery has cultivated nine mature individuals from the original wild-collected seed (of which they still hold six). Staff have hand-pollinated these to produce three thousand seedlings with a view to reintroducing some of these to the wild. The authorities in the Philippines have been contacted with regard to locating a suitable, safe, protected site for re-introduction.

Further botanical survey work is needed in Mindanao to discover whether more locations for this species exist, and if so, to gather basic population data.

Nepenthes species are listed on CITES Appendix II, meaning that trade in wild collected plants is subject to controls.

Nepenthes robcantleyi is cultivated in the Tropical Nursery (one of the behind-the-scenes areas) at Kew.

The Nepenthes collection is one of the few for which Kew still uses a small amount of peat. A coir-based mix has been tested but was not suitable and hence a perlite and peat mix is used. Kew is committed to reducing its use of peat even further and is trialling a range of alternatives from pure Seramis (expanded clay particles) to finely chipped bark.

Plants are kept at 20-24°C during the winter and vents are opened if the temperature reaches 26°C in the summer. They are misted daily (but only on sunny days during the winter), twice daily during the summer. Plants benefit from the strong light of a south-facing position and small weekly feeds of liquid fertiliser.

Nepenthes robcantleyi can be seen growing in the Tropical Carnivorous Zone of Kew's Princess of Wales Conservatory (Zone 8).

This newly redeveloped zone is home to many other species including Nepenthes truncata , N. rafflesiana , N. vietchii and the distinctively 'fanged' N. bicalcarata . Growing alongside these are Amorphophallus paeoniifolius and A. variabilis .

A pressed and dried specimen of Nepenthes robcantleyi is held in Kew's Herbarium, where it is available to researchers from around the world, by appointment.

Kew has a long tradition of work on Nepenthes . Joseph Hooker, a former Director of Kew, completed the first revision and described many of the world's most spectacular species.

Kew's micropropagation unit pioneered development of cultures from seed in the 1970s and 1980s. Species such as Nepenthes rajah , which had been highly threatened by the collection of plants from the wild, became widely available through subsequent tissue culture work carried out by various nurseries.

Small mammals and reptiles may drown and then be digested if they fall into the large pitchers of this species.

Use
Cultivated as an ornamental by carnivorous plant enthusiasts. 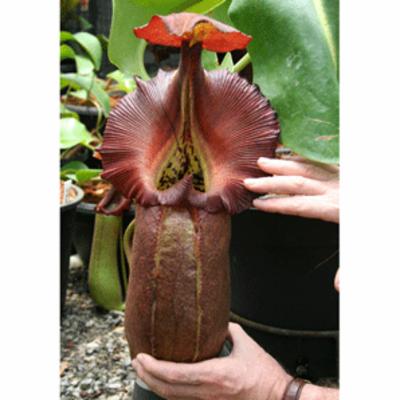 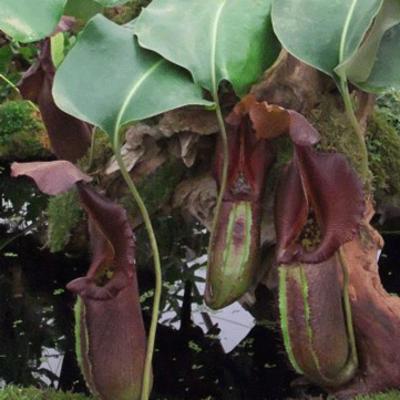 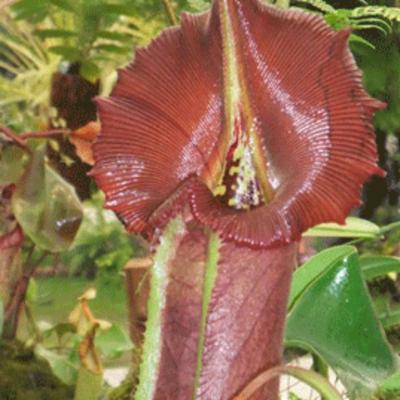 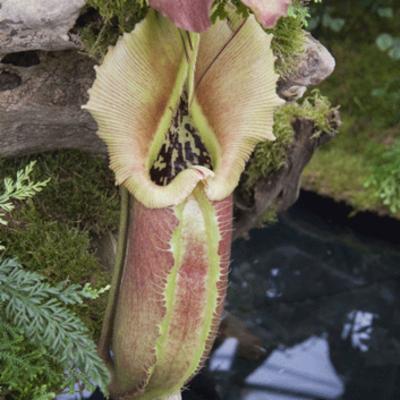