Aloidendron dichotoma, previously known as Aloe dichotoma, is named for its distinctive forked branching pattern (from the Greek dikhotomia, meaning 'a cutting in two'). 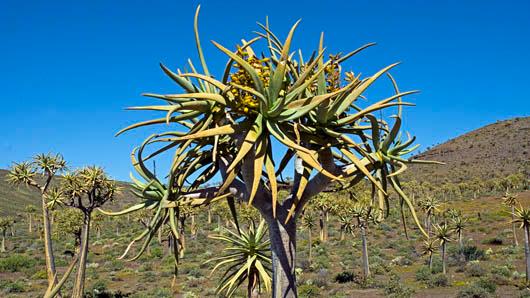 Aloidendron dichotoma, previously known as Aloe dichotoma, is named for its distinctive forked branching pattern (from the Greek dikhotomia, meaning 'a cutting in two').

This species occurs in South Africa and Namibia.

Aloe dichotoma is a tree aloe which grows up to 9 m tall. The trunk is stout with pale, flaking bark and a dense, rounded crown. The greyish leaves are succulent, about 30 cm long and narrow, with small teeth on the margins. The leaves are borne in rosettes. The flowers are bright yellow, tubular and about 3 cm long with orange stamens protruding from the mouth. The flowers are borne in racemes on a branched panicle about 30 cm tall.

Aloe dichotoma is threatened by the effects of climate change. Researchers in South Africa have shown that its distribution has shrunk during the last century and it has not yet been found in areas expected to become suitable with the changing climate.

The English common name for Aloe dichotoma - the quiver tree - refers to the San people's use of the hollowed branches to make quivers to hold their hunting arrows. The roots are used in traditional medicine for asthma and tuberculosis. The plant has been tested for bioactivity against the malaria parasite ( Plasmodium falciparum ) and inflammatory responses.

Aloe dichotoma is also cultivated as an ornamental.

Aloe dichotoma is a relatively easy species to grow, but is slightly more difficult to propagate. A well-drained gritty compost should be used. At Kew this species is grown in mixed glasshouses with a minimum temperature of 10 °C, although this species could tolerate a temperature slightly lower than this. Aloe dichotoma can be grown outside in a pot for summer. It is best to soak the compost in the growing season and allow it to dry out fully between waterings. It should be watered more lightly in winter.

The easiest way to grow this species is from seed, although taking truncheon cuttings could be tried. At Kew, the base of the cuttings is sealed with sealing wax to keep moisture in the cutting for as long as it takes for the truncheon to push out roots in a slightly damp medium. Seramis (clay granules) is used as the medium.

Aloe dichotoma is grown in the behind-the-scenes Tropical Nursery at Kew. A display of other Aloe species can be found in the Princess of Wales Conservatory.

Between April and October 2010, Kew and the British Museum brought a small corner of South Africa to the heart of London. The South Africa Landscape celebrated a shared vision to strengthen cultural understanding and support biodiversity conservation across the world.

Aloe dichotoma (quiver tree) was one of the star plants featured in the Landscape. 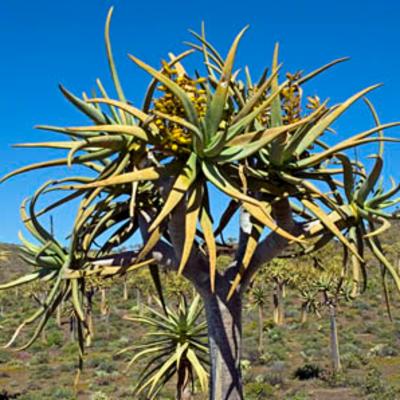 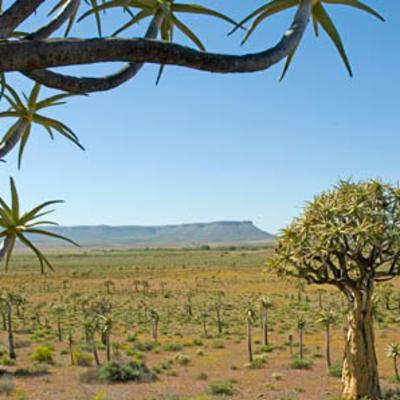 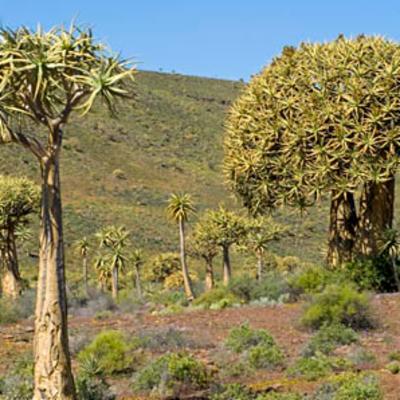 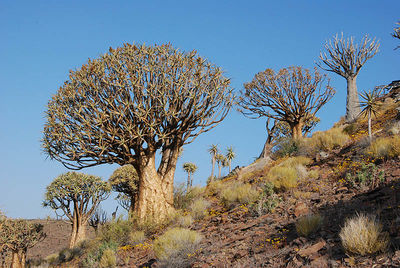 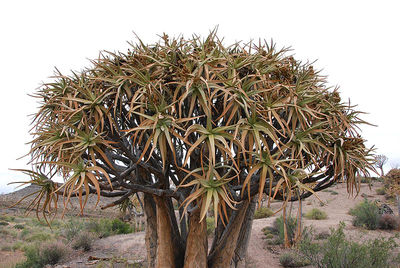 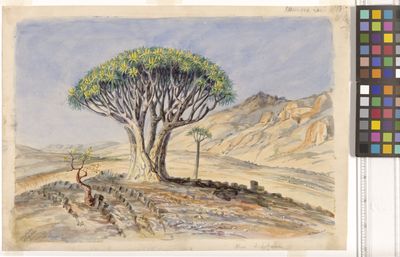 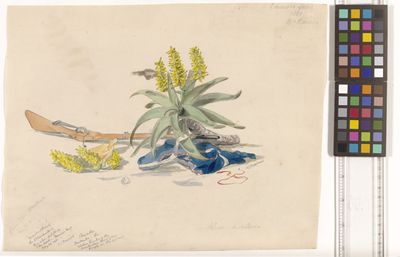