First published in Gen. Hist. 4: 95 (1837)
This species is accepted
The native range of this species is E. & S. Madagascar. It is a subshrub or shrub and grows primarily in the seasonally dry tropical biome. It is used as animal food, a poison and a medicine, has environmental uses and for food. 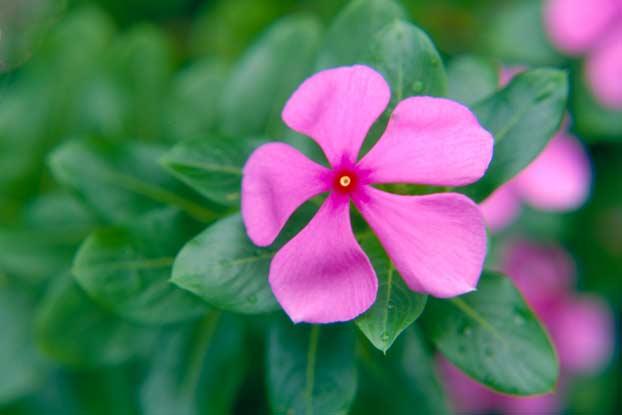 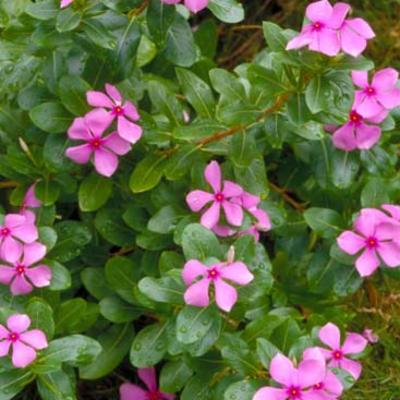 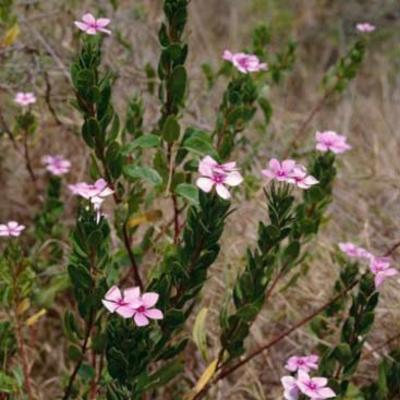 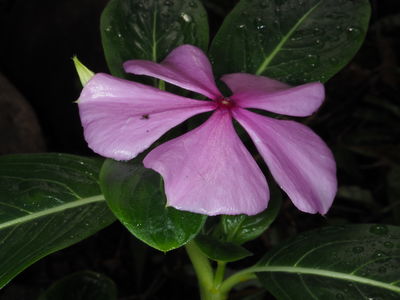 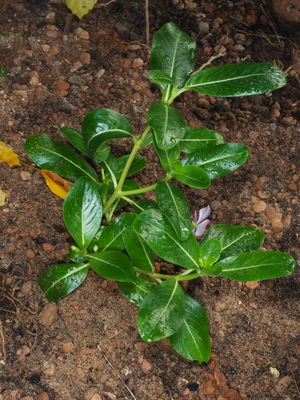 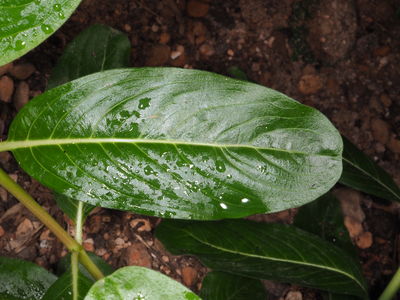 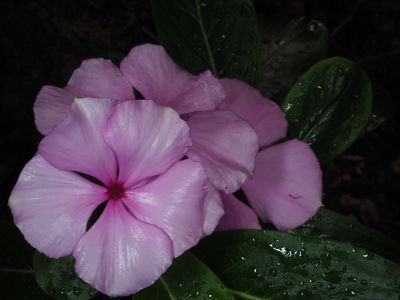 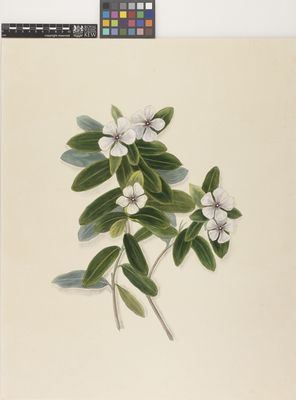 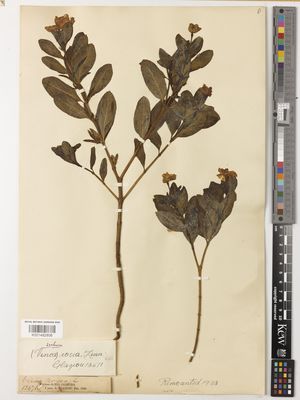 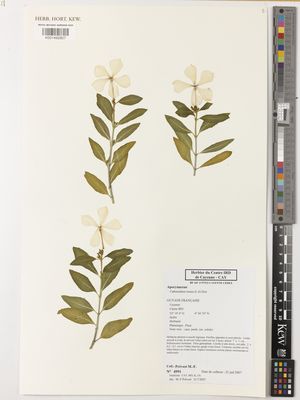 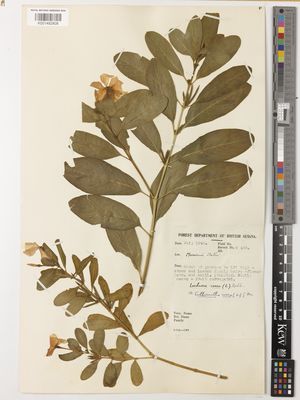 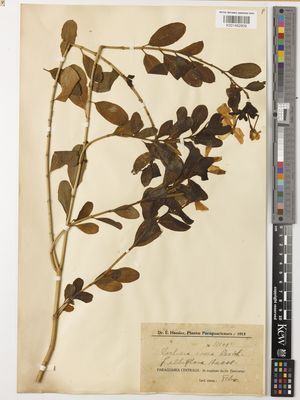 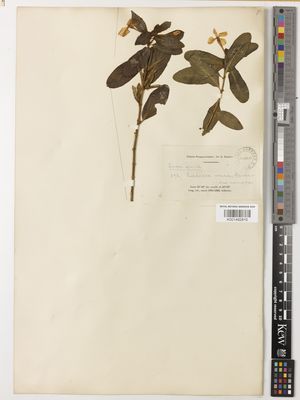 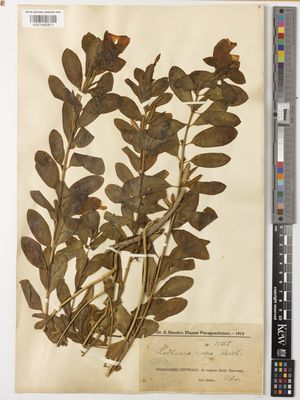 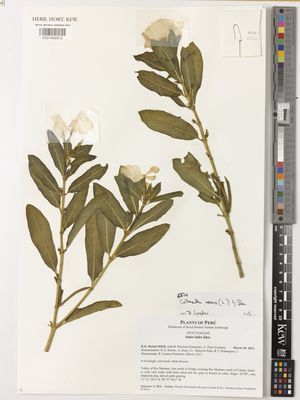 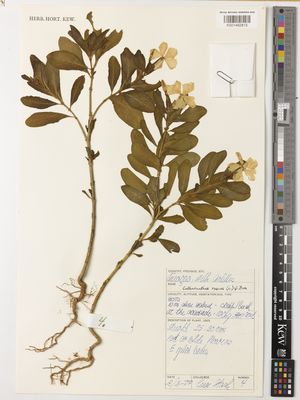 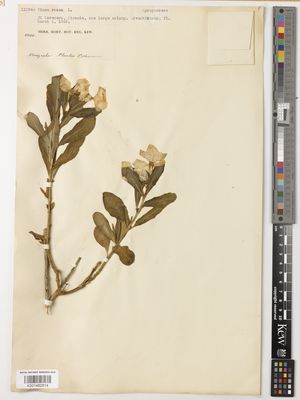 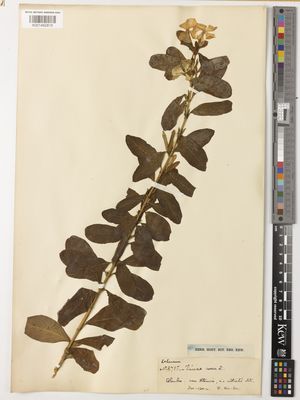 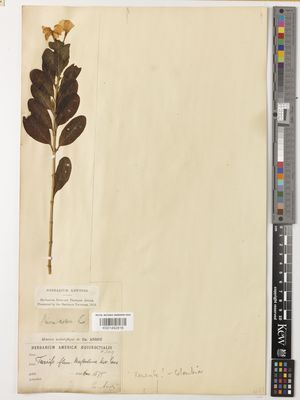 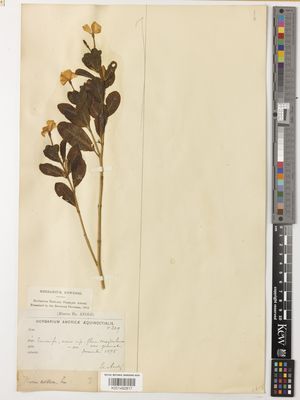 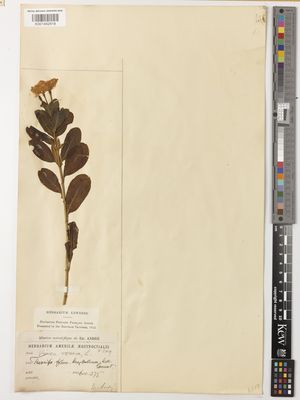 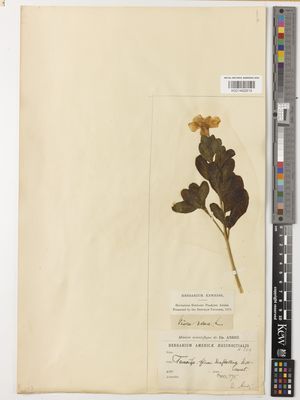 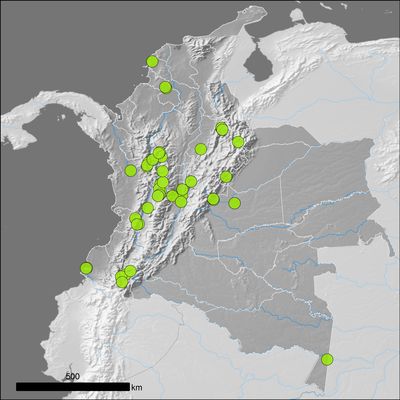 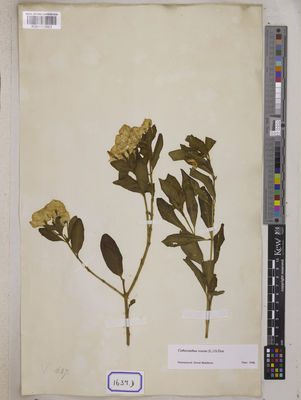 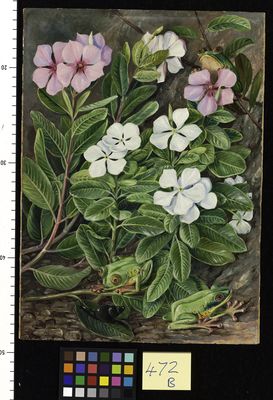 General Description
Madagascar periwinkle is a popular ornamental plant found in gardens and homes across the world, and is used in the treatment of cancer.

Madagascar periwinkle is a popular ornamental plant found in gardens and homes across the warmer parts of the world. It is also known as the source of chemical compounds used in the treatment of cancer. Their discovery led to one of the most important medical breakthroughs of the twentieth century.

The flowers are adapted to pollination by a long-tongued insect, such as a moth or butterfly. This species is also able to self-pollinate. Self-compatibility and a relatively high tolerance to disturbance have enabled the plant to spread from cultivation and to become naturalised in many parts of the world. As a consequence, Madagascar periwinkle is sometimes considered to be an invasive weed, although it does not normally proliferate sufficiently to eliminate native vegetation. Its seeds have been seen to be distributed by ants.

Madagascar periwinkle is indigenous to Madagascar, but is cultivated and naturalised throughout the tropics and parts of the subtropics.

Overview: A tender, perennial plant which grows as a herb or subshrub sprawling along the ground or standing erect (30 cm to 1 m in height).Like many other plants in the Apocynaceae family, the sap is a milky latex.

Leaves: The leathery, dark green leaves are arranged in opposite pairs.

Fruits: Each fruit is made up of two narrow, cylindrical follicles which house numerous grooved seeds.

In traditional medicine, Madagascar periwinkle has been used to treat a variety of ailments in Madagascar as well as in other parts of the world where the plant has naturalised.

Whilst researching the anti-diabetic properties of the plant in the 1950s, scientists discovered the presence of several highly toxic alkaloids in its tissues. These alkaloids are now used in the treatment of a number of different types of cancer, with one derived compound, called vincristine, having been credited with raising the survival rate in childhood leukaemia from less than 10% in 1960 to over 90% today. Powerful medicinal plants such as the Madagascar periwinkle remind us of the need to conserve and study the increasingly threatened plant habitats of the world.

Madagascar periwinkle is grown as a bedding plant in tropical regions and cultivated indoors as a house plant in temperate areas.

Madagascar's forests have been heavily impacted by human activity, but Madagascar periwinkle's ability to thrive in disturbed areas has enabled it to survive in its island home. Furthermore, it is widely established in the wild throughout tropical regions of the world, commonly cultivated in gardens and homes, and grown commercially for the pharmaceutical industry. Given the modern ubiquity of naturalised and cultivated populations of Madagascar periwinkle, direct conservation measures are a low priority for this species.

A rainforest cure for cancer?

Madagascar periwinkle was for many years grown simply as an attractive bedding plant in tropical areas. It comes in a range of pinks and reds that give rise to its other common name, rosy periwinkle. But today it has a more serious purpose; planted around the world during colonial times, it quickly became known at the same time as a useful folk medicine for diabetics. American and Canadian researchers during World War Two became aware that soldiers stationed in the Philippines were using it instead of insulin during shortages.

As a consequence, after the war, lab testing was done in earnest on Madagascar periwinkle. This revealed that the plant contained thirty alkaloids, strong plant chemicals that might be of use to humans. The leaves were found to contain two particularly valuable alkaloids, vinblastine and vincristine. These alkaloids work by disrupting part of cell division or 'mitosis', stopping the process when newly copied DNA is split into two identical parts to produce two identical new cells.

The drug company Eli Lilly tested the new chemicals on mice and found they helped to combat cancers, in particular those of the bone marrow such as childhood leukaemia and non-Hodgkin's Lymphoma. They developed an effective chemotherapy treatment, and today the prognosis for sufferers has changed from a one in ten chance of survival, to at least an eight out of ten chance of some remission.

Madagascar periwinkle shows how important it is to preserve areas of rich biodiversity, for there may be other 'miracle drugs' contained in plants just waiting to be discovered. But it also epitomises the issues involved in exploiting the riches of the plant world. In the 1960s, when these alkaloids were discovered, rich Western countries saw little need to reward the original homeland of the periwinkle, Madagascar, for the riches that had been earned from the plant.

Today at Kew we take a different view. We believe that Madagascar's people should have a say over how their plant resources are exploited: particularly where a plant is restricted to a single country. The Convention on Biological Diversity, of which the UK is a signatory, states that rights to exploit a discovery like that of the alkaloids in the periwinkle should be shared fairly.

In practice, this means that Kew has a legal team whose job is it to make sure that things are done equitably. Before a plant collecting team can even book flights, contracts are drawn up to ensure that the country being visited is happy with the arrangements being made. With such contracts in place, local people have much more incentive to look after their biodiversity. Now they know that if a profitable discovery is made, they will have a share in it.

A collection of  Catharanthus roseus  seeds is held in Kew's Millennium Seed Bank based at Wakehurst in West Sussex.

Madagascar periwinkle is easy to cultivate, and can be propagated by seed or by cuttings, but is sensitive to over-watering. A tender plant, it does not withstand frosts and is best grown indoors in temperate climates. It thrives in hot and humid environments, in full sun or partial shade and flowers all year round in hot climates.

Catharanthus roseus is easily propagated by apical semi-ripe cuttings in light, free-draining compost. The best results are obtained when bottom heat and high humidity are provided. Propagation can also be carried out by seed, which should be maintained at 22-25ºC and kept in the dark until the seeds germinate.

Madagascar periwinkle can be seen growing in the Palm House at Kew.

Preserved specimens of Catharanthus roseus are held in Kew's Herbarium and also the Economic Botany Collection, where they are available to researchers by appointment.

Distribution
Madagascar
Ecology
On sand and limestone soils in woodland, forest, grassland, and disturbed areas.
Conservation
Not yet assessed according to IUCN Red List criteria.
Hazards

As with other members of the Apocynaceae family, the sap is extremely toxic.

Use
Cultivated as an ornamental Some of the alkaloids of C. roseus are used for the treatment of leukaemia in children.