Toothbrush tree is a small, evergreen shrub or tree that grows in hot, dry conditions in parts of Africa, the Middle East and the Arabian Peninsula. It is valued as a medicinal plant by local people, since it contains a number of active compounds that promote good health. 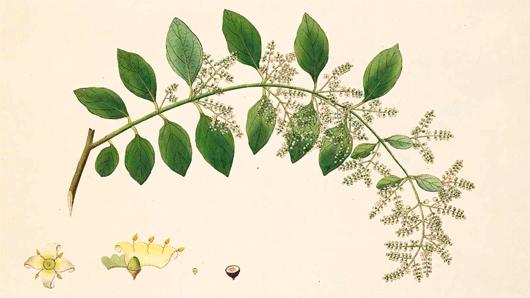 Morphology General Habit
Evergreen shrub with grey or whitish scrambling stems, or a small tree
Morphology Leaves
Leaves pale green or greyish-green, ± fleshy; petiole 3–13(–20) mm long; blade leathery, lanceolate to elliptic or round, 1.4–10.5 x 1.2–7.5 cm, cuneate to subcordate at the base, rounded to acute and sometimes mucronate at the apex
Morphology Reproductive morphology Flowers
Flowers greenish-white, in numerous axillary and terminal panicles
Morphology Reproductive morphology Fruits
Drupes red or dark purple when ripe, c. 5–7 mm in diam.
Vernacular
Cadey (Somali, plant), rumay (Somali, tooth brush); mustard tree (English).
Note
The species has been divided into a number of varieties, and except for the widespread type variety, three other varieties have been recorded in Somalia. These are no more than extreme forms within a continuous variation

Toothbrush tree is a small, evergreen shrub or tree that grows in hot, dry conditions in parts of Africa, the Middle East and the Arabian Peninsula. It is valued as a medicinal plant by local people, since it contains a number of active compounds that promote good health.

As the common name suggests, small stems and roots are used as chewing sticks or natural toothbrushes and have been shown to reduce tooth decay, plaque and gum disease.Although the flowers are small and inconspicuous, the fruits that follow can be eaten or made into a drink, and the seeds are a valuable source of oil.

Although it is drought tolerant, toothbrush tree is often found where there is some ground water. It is also salt tolerant, growing along coasts or on saline soils.

Overview: An evergreen shrub or small tree, reaching up to 7 m tall, with many drooping branches.

Leaves: Rounded to ovate, slightly fleshy, about 7 × 3 cm, arranged in opposite pairs.

Fruits: Fleshy berries about 1 cm in diameter, becoming red-scarlet when ripe. Each contains a single seed.

Although Salvadora persica has a wide distribution and tolerates harsh conditions, it is vulnerable to habitat loss and overgrazing.

Toothbrush tree fruit can be eaten fresh, cooked, dried and stored or made into a fermented drink. The leaves have a bitter, peppery taste and are eaten as a green vegetable or made into a sauce.

The most widespread use of toothbrush tree is for chewing sticks or natural toothbrushes. Small twigs (around 3-5 mm in diameter) are used and have both physical and anti-microbial action, helping to control plaque and prevent tooth decay.

Roots and stems contain numerous active compounds, including salvadorine and benzylisothiocyanate, which inhibit bacteria that cause tooth decay, and tannins, which reduce plaque and gum disease. Leaves can be made into a mouthwash with similar properties.

Chewing sticks have been used for dental hygiene as far back as the time of the Babylonians (around 7000 BC). Salvadora persica is mentioned in the Qur'an and the Bible (as 'mustard seed' or 'pepper bush'). Today, it is used as a natural toothbrush by millions of people.

Other parts of the toothbrush tree are used to treat a range of ailments, including stomach ache, rheumatism and sores.

When pressed, seeds yield oil that is rich in lauric and myristic acids and can replace coconut oil in production of soaps and detergents.

Being tough and resilient to harsh conditions, toothbrush tree is often planted as a windbreak and can be used to improve saline or impoverished soils.

Leaves of Salvadora persica are browsed by cattle, sheep, goats and camels, although they are said to make milk taste bad. The flowers are a useful source of nectar for honeybees.

Five collections of Salvadora persica seeds are held in Kew's Millennium Seed Bank based at Wakehurst in West Sussex.

Toothbrush tree is usually harvested from the wild rather than being cultivated. However, it germinates easily from seed once the flesh of the fruit is cleaned away and coppices well.

It tolerates extreme heat (up to about 45 ⁰C) and drought, but production is higher when it has some moisture around the roots.

Toothbrush tree can be seen growing in Kew'sPalm House, where it is located in the African section (bed 17).

Specimens of stems, roots, seeds, wood, bark and fruits of toothbrush tree, as well as chewing sticks and toothpaste made from it, are held in Kew's Economic Botany Collection in the Sir Joseph Banks Building, where they are available to researchers by appointment.

Toothpaste made from Salvadora persica is displayed in the Plants+People exhibition, in Kew's Museum No. 1.

Distribution
India, Saudi Arabia
Ecology
Thorny scrub or grassland, along river banks or on seasonal floodplains; also along the coast.
Conservation
Not assessed according to IUCN Red List criteria, but not considered to be threatened.
Hazards

Use
The fruits of S. persica are edible and have a pungent taste. Twigs and roots are widely used as tooth brush. E xtracts from S. persica are used also in some tooth pastes in Europe, and the contents of salt and resins are said to have a cleaning effect.

Use
Food and drink, medicine. 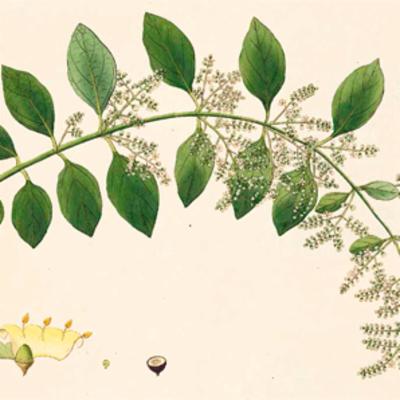 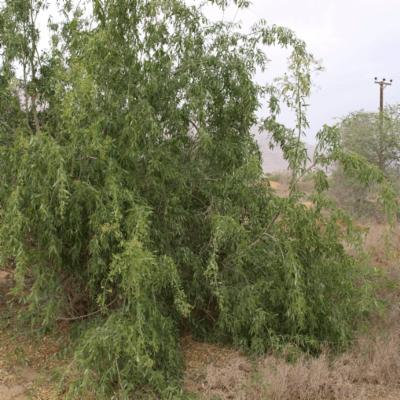 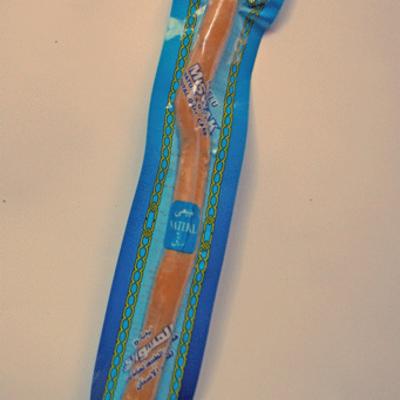 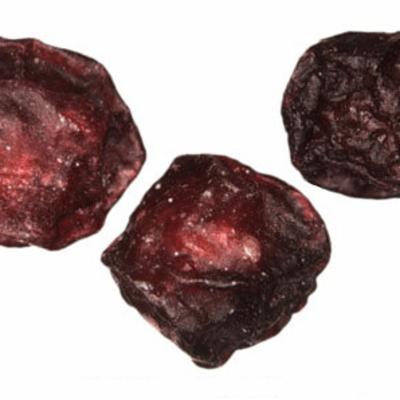 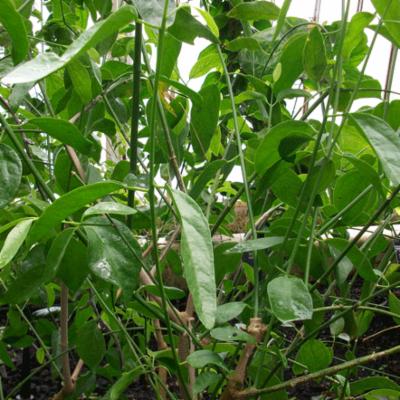 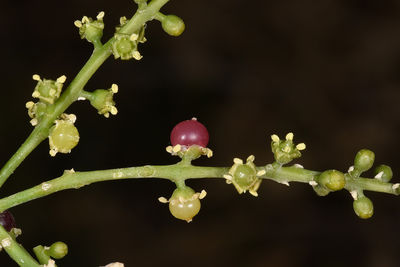 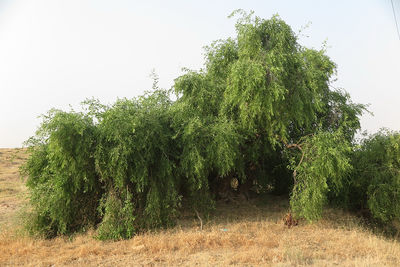 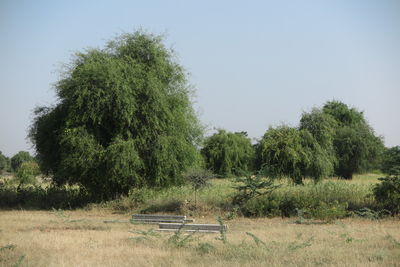 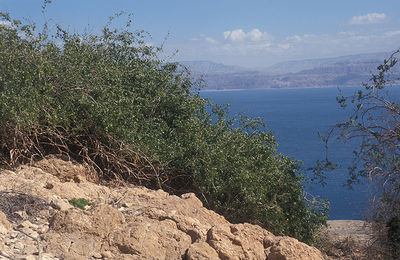 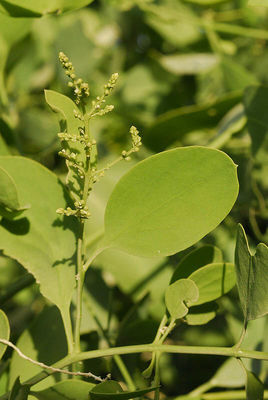 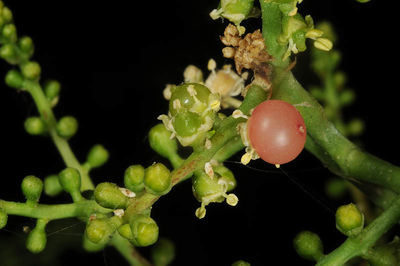 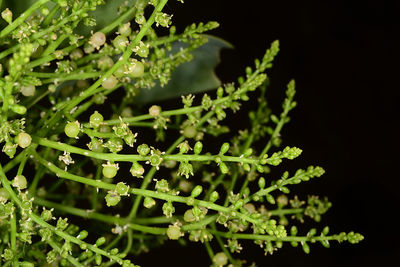 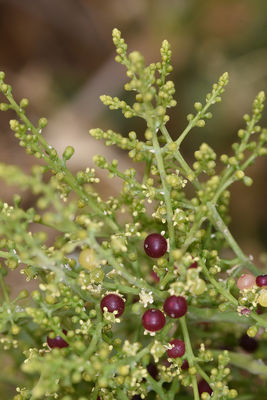 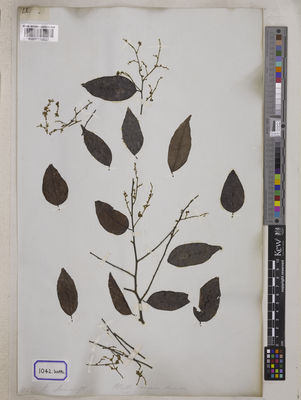 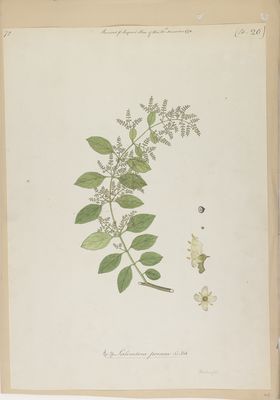