Musa acuminata is the wild ancestor of the cultivated banana. Thousands of years of domestication have produced a delicious edible fruit consumed by millions of people throughout the world. The yellow variety known as the Cavendish, which populates supermarket shelves, represents just a small proportion of global production. 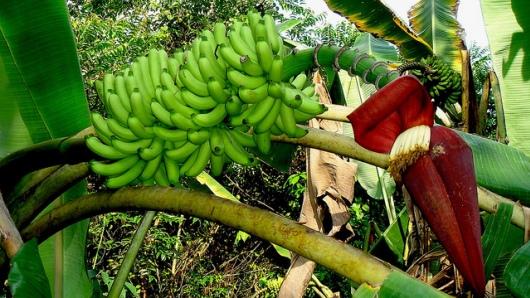 Musa acuminata is the wild ancestor of the cultivated banana. Thousands of years of domestication have produced a delicious edible fruit consumed by millions of people throughout the world. The yellow variety known as the Cavendish, which populates supermarket shelves, represents just a small proportion of global production.

The diversity within banana is huge ranging from sweet to savoury, bent to straight and varying in colour from green, yellow, pink, silvery or even striped and spotted. The fruits of the banana contain high levels of minerals such as phosphorus, calcium and potassium as well as vitamins A and C. Their high carbohydrate content makes them a favourite with sports people while the potassium they contain helps in avoiding muscle cramp.

The majority of dessert bananas eaten today derive from Musa acuminata and are mainly eaten raw. Plantains which are more starchy and less sweet are a hybrid between Musa acuminata and Musa balbisiana are usually cooked and eaten as a vegetable. Morphologically wild banana is very different to its cultivar.

The wild species contains seeds, while cultivated bananas are almost always seedless (parthenocarpic) and are therefore sterile and dependent on vegetative propagation by means of corms. For this reason, they lack genetic diversity and are therefore susceptible to pests and diseases.

Bananas are extremely versatile and beyond their use as food for humans, they provide shelter, building materials and fibre among other things, and are even used by some in rituals and religious ceremonies.

Edible bananas and plantains are thought to have originated in Southeast Asian and western Pacific regions where their inedible, seed-bearing, diploid (containing two sets of chromosomes) ancestors can still be found today. Edible banana first occurred through the natural crossing of various inedible diploid species of Musa acuminata resulting in sterile hybrids which were seedless (parthenocarpic) and triploid, containing three sets of chromosomes. Local people soon discovered that these hybrids had edible fruits and they began to propagate the plants vegetatively by suckers. Before long the crosses that produced the tastiest fruits were selected, cultivated, propagated and distributed as a food crop. Today Musa acuminata is distributed mainly on margins of tropical rainforests. The largest producer of banana today is India.

Overview: There is a huge amount of morphological variability in the cultivated banana. Musa spp. which include banana and plantain, are not trees but giant herbs with a pseudostem (formed from the bases of leaves rolled tightly around each other). Members of this genus can grow up to 15 m tall making them the largest perennial herb in the world.

Roots: Banana plants cultivated vegetatively do not have one main taproot; instead they have a root system that is fleshy and adventitious.

Leaves: Leaves are arranged spirally and are up to 2.7 metres long and 60 cm wide.

Flowers and fruits: Male flowers are borne at the tip of the inflorescence and, beneath them, separated by several sterile flowers, are the female flowers which develop into fruits. In the case of the cultivated banana the fruits develop parthenocarpically and are seedless. The fruits are arranged in hands, each formed of 10-20 bananas (fingers).

The cultivated banana is an important crop in the tropics and subtropics, providing energy and nutrient rich food for millions of people throughout the world. For many people living in the tropics, the banana is a staple crop, providing food from the fruit, bud and leaf as well as building materials, shelter, wrappings for food and other items, even burial shrouds. They are also commonly cultivated for ornamental purposes and for their fibres. Bananas have a spiritual significance for many people and they are used in fertility rituals and are planted in sacred precincts in India.

As a food, banana is used in a multitude of different ways:

The fruit can be simply peeled and eaten, or sliced and served in salads, cakes, custards and ice-cream.It is often baked with dough to make banana bread or topped with sugar and cinnamon and eaten on pancakes.In the South Pacific ripe bananas are mashed, mixed with coconut cream and scented with Citrus leaves to make a thick fragrant drink.Many infants throughout the world start their journey from milk to solid food with banana puree.The addition of ascorbic acid to prevent discoloration means that it can be successfully canned and sold in supermarkets.In Costa Rica the ripe bananas are peeled and boiled slowly for several hours to make a thick syrup called 'honey'.In Africa, ripe bananas are fermented into beer and wine.

In the tropics banana leaves are commonly used as plates and for wrapping and storing food. Holding a banana leaf by the petiole makes an effective umbrella. The peel of dried banana has a high tannin content and is used to blacken leather. The ash from the dried peel of the banana is rich in potash and is used in soap-making.

Banana has many medicinal uses. To list just a few:

the flowers are used to treat bronchitis and diabetesthe astringent plant sap is reputed to be effective in treating hysteria, epilepsy, fever, diarrhoea and can also relieve haemorrhoids and insect bites and stingsthe young leaves are used as poultices on burnsthe roots are used for digestive problemsthe peel and pulp of ripe bananas are found to have anti-fungal and antibiotic properties Crop wild relatives of banana

The Millennium Seed Bank and the Global Crop Diversity Trust are engaged in a ten-year project, called 'Adapting Agriculture to Climate Change'. The project aims to protect, collect and prepare the wild relatives of 29 key food crops, including banana, so that they are available to pre-breeders for the development of new varieties that are more resilient to the effects of climate change.

The importance of genetic diversity is highlighted by the tragedy of Panama disease in the 1950s. At that time, the commercially dominant banana, the Gros Michel, was virtually wiped out by a single fungus,  Fusarium oxysporum , which causes Panama Disease.

This seedless banana saw worldwide popularity in the 1940s and as the demand for this particular species grew, farmers of the Gros Michel banana began to produce this species almost exclusively. These bananas lacked the genetic diversity necessary to survive the disease because their self-pollinating style of reproduction meant that they were all genetically identical to each other.

The industry turned to the disease resistant Cavendish banana, which is the cultivar widely seen on supermarket shelves today. Although resistant to Panama Disease, the Cavendish, like the Gros Michel, is a monoculture. This lack of genetic diversity leaves the Cavendish vulnerable to being wiped out by another disease or even an evolved strain of Panama Disease.

Wild relatives and cultivars of the banana have a wealth of genetic diversity which can be used to transfer useful traits such as disease resistance to the crop. Research is ongoing to maintain and increase the importance of banana as a staple food and cash crop.

The  Millennium Seed Bank Partnership aims to save plants worldwide, focusing on those plants which are under threat and those which are of most use in the future. Once seeds have been collected they are dried, packaged and stored at -20°C in our seed bank vault.

Seed storage behaviour: Intermediate (meaning that the seeds are more tolerant of desiccation than recalcitrants, though that tolerance is much more limited than is the case with orthodox seeds).

Ecology
Banana grows well in warm, humid tropical and subtropical climates. It prefers well-drained, moist soil and can grow on a range of different soil types including sandy, loamy and clay soils.
Conservation
Widespread in cultivation.

Use Gene Sources
Crop wild relatives which may possess beneficial traits of value in breeding programmes (State of the World's Plants 2016).

Use Animal Food
Used as animal food.
Use Gene Sources
Used as gene sources.
Use Food
Used for food.
Use Materials
Used as material.
Use Medicines
Medical uses.
Use Social
Social uses. 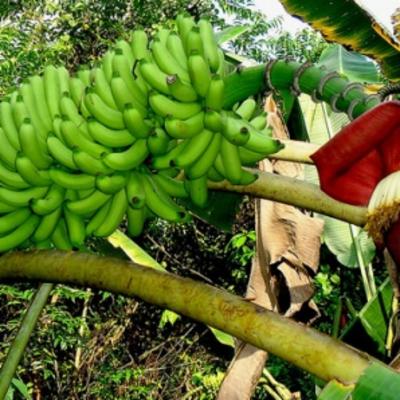 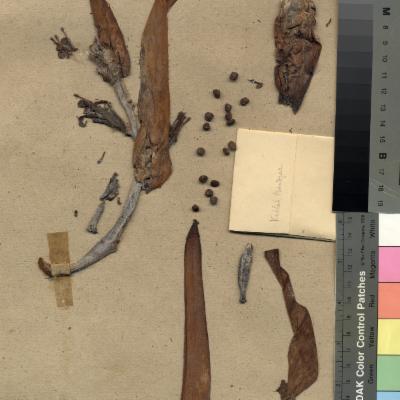 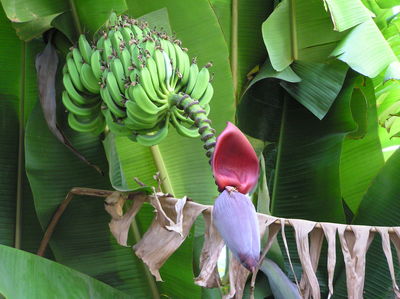 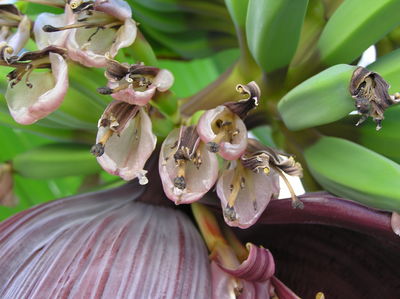 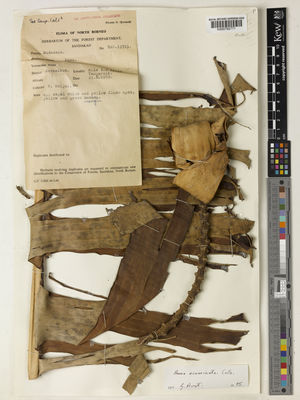 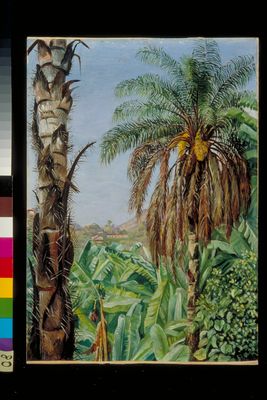 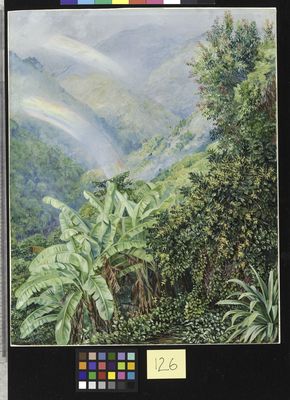 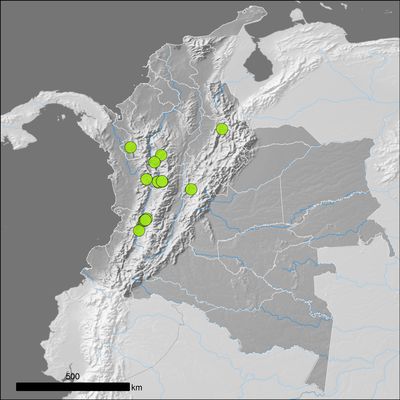