Digitalis purpurea was named by the Swedish botanist Carl Linnaeus in his pivotal publication Species Plantarum in 1753. The generic name Digitalis comes from the Latin for finger (digitus), referring to the shape of the flowers. The specific epithet purpurea refers to the colour of the flowers, which are frequently purple (although a white-flowered form is fairly common). Common foxglove is a popular ornamental, and many hybrids and cultivars are available. 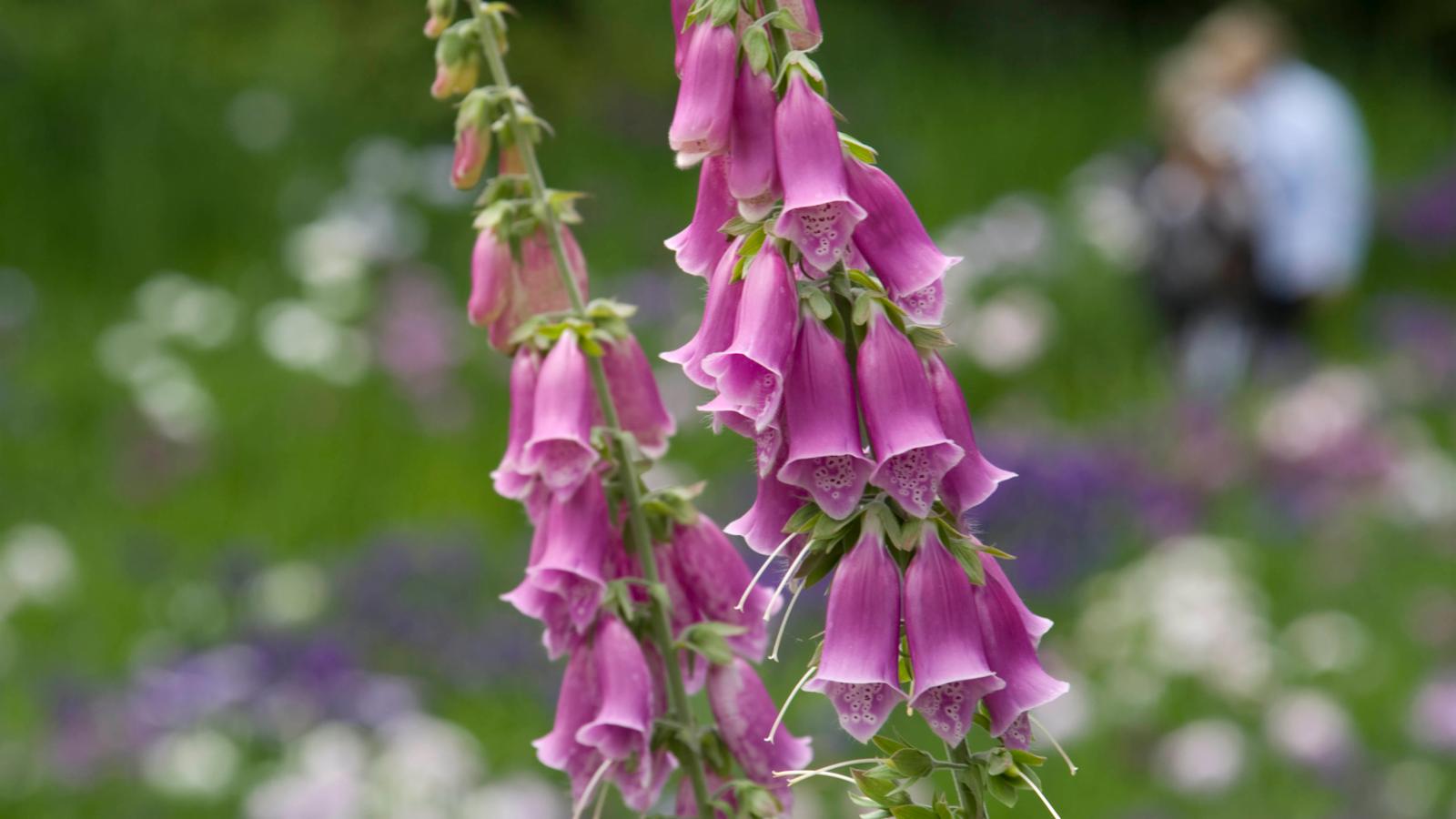 General Description
A popular ornamental, with tall spires of tapered, tubular, purple to pink or white flowers, common foxglove is also a source of digitoxin, used in the heart drug digitalis.

Digitalis purpurea was named by the Swedish botanist Carl Linnaeus in his pivotal publication Species Plantarum in 1753. The generic name Digitalis comes from the Latin for finger (digitus), referring to the shape of the flowers. The specific epithet purpurea refers to the colour of the flowers, which are frequently purple (although a white-flowered form is fairly common). Common foxglove is a popular ornamental, and many hybrids and cultivars are available.

Common foxglove is thought to be native to west, south-west and west central Europe, and to be widely naturalised further east.

Its exact status, whether truly native or naturalised, in each country is unknown, but it is possibly native in the following countries: Belgium, the Czech Republic, France, Germany, the United Kingdom, Ireland, Italy (Sardinia), Luxembourg, Norway, Portugal, Slovakia, Spain and Sweden (and perhaps also Austria, Denmark, Hungary, The Netherlands and Poland).

It is naturalised in North America, and is listed as an 'invasive and noxious weed' by the United States Department of Agriculture.

Description Overview:  An erect biennial (or short-lived perennial), growing up to 2 m tall, with a downy covering of hair.

Leaves: The basal leaves are ovate to lanceolate and are borne on a winged petiole (leaf stalk) of 3-12 cm long.

Flowers: The flowers are borne on a simple or sparsely branched raceme with un-stalked bracts; the upper bracts are sometimes minute. The pedicels (individual flower stalks) are 11-20 mm long and hairy. The corolla (petals) is purple to pale pink or white, 40-55 mm long, and is usually marked on the inside with dark purple spots edged with white.

Fruits: The fruit is an ovoid capsule of 11 x 7 mm, equal to or longer than the calyx (sepals). The brown, rectangular seeds are almost 1 mm long, with a network of ridges across the surface.

The flowers usually open between June and September and are pollinated by bumblebees.

Common foxglove is cultivated for its ornamental value, and many hybrids (with other Digitalis species) and cultivars are available. It is also grown to attract bumblebees to gardens. Its flowers provide food for larvae of the foxglove pug moth ( Eupithecia pulchellata ) and it is also a food plant for larvae of the frosted orange moth ( Gortyna flavago ).

Digitalis purpurea also contains loliolide, a potent ant-repellent which was once used as an insecticidal disinfectant for walls in the Forest of Dean, England.

Foxgloves are a source of digitoxin, a glycoside used in the drug digitalis, which has been used as a heart stimulant since 1785. It is also well-known for its toxicity, and ingestion of the leaves (usually as a result of misidentification for comfrey,  Symphytum officinale ) can result in severe poisoning.

Despite their toxicity, they have been widely used in folk-medicine. Foxglove tea (an infusion of the leaves) was taken for colds, fevers and catarrh, and compresses were used for ulcers, swellings and bruises. Its most common use was as a diuretic against dropsy (accumulation of fluid in the tissues), for which it was sometimes effective, but occasionally proved fatal.

William Withering, an 18th century botanist and physician, studied the medicinal use of foxgloves, in particular their use in the treatment of dropsy. He discovered that an infusion of the leaves could slow and strengthen the heartbeat, which in turn stimulated the kidneys to clear the body and lungs of excess fluid. He also showed that foxglove leaves could be used in the treatment of heart failure (but that high doses could stop the heart).

Withering's  An Account of the Foxglove and Some of its Medical Uses: with Practical Remarks on Dropsy, and Other Diseases  (1785) is a landmark publication, being the first English text in which the therapeutic effects of a drug are described, and is considered by some to mark the birth of modern pharmacology. Withering's work led to the eventual isolation and purification of digitoxin and digoxin (cardiac glycosides used in modern medicine as heart stimulants in the drug digitalis).

Today, digitalis is normally made using  Digitalis lanata  leaves (although during the Second World War  D. purpurea seeds were collected from the wild and grown to produce large quantities of leaves for medicinal use).

The main toxins in Digitalis species are cardiac glycosides, which are present in all parts of the plant. The flowers contain the lowest concentration of toxins, yet their ingestion can still result in gastrointestinal effects. The ingestion of leaves can cause oral and abdominal pain, nausea, vomiting and diarrhoea. In severe cases, symptoms can include visual and perceptual disturbances and heart and kidney problems. There have been many reported cases of poisoning, for example when foxglove leaves have been mistakenly collected by those wishing to make comfrey ( Symphytum officinale ) herbal tea.

Kew'sMillennium Seed Bank Partnership aims to save plant life world wide, focusing on plants under threat and those of most use in the future. Seeds are dried, packaged and stored at a sub-zero temperature in our seed bank vault.

A collection of  Digitalis purpurea  seeds is held in Kew's Millennium Seed Bank based at Wakehurst in West Sussex.

Digitalis purpurea can be seen growing wild in the grounds of Queen Charlotte's Cottage at Kew. It is also grown in the Queen's Garden (behind Kew Palace), the Secluded Garden, and the Woodland Garden around the Temple of Aeolus. Extensive areas of foxgloves can be seen in the woodlands at Wakehurst.

Dried and spirit-preserved specimens of common foxglove are held in Kew's Herbarium, where they are available to researchers by appointment. The details of some of these can be seen online in the Herbarium Catalogue.

Specimens of Digitalis purpurea leaves, seeds, roots, wood, prepared digitalis BP, a 'concentrated infusion of foxglove', and digoxin tablets are held in Kew's Economic Botany Collection in the Sir Joseph Banks Building, where they are available to researchers by appointment.

Ecology
Open places, especially woodland clearings, heaths and mountainsides and also waste ground (especially on disturbed sites and as a pioneer on burnt areas); on acid or calcareous soils; also as a garden escape.
Conservation
Not threatened. Not evaluated according to IUCN Red List criteria.
Hazards

All parts of the plant are poisonous if eaten. Contact with plant material can cause irritation. 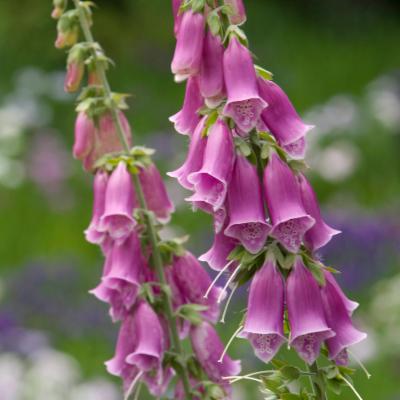 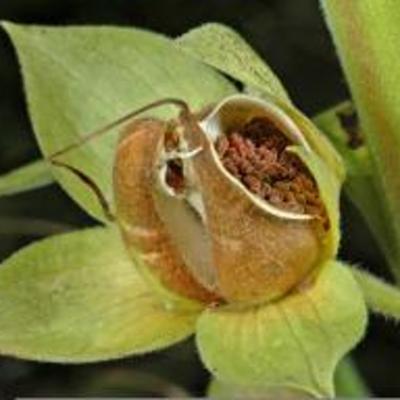 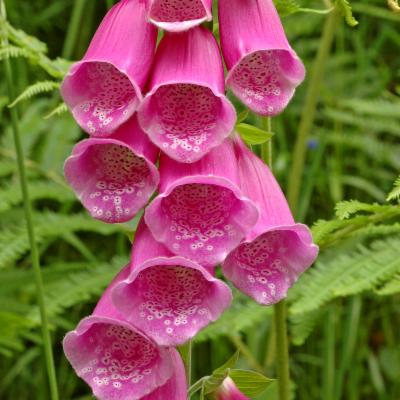 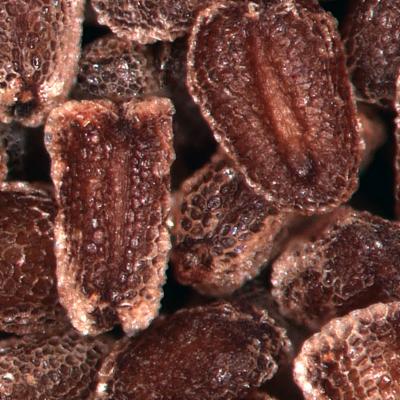 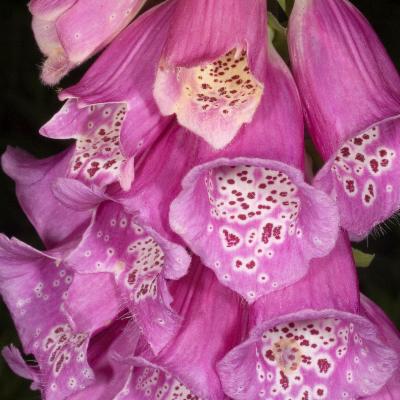 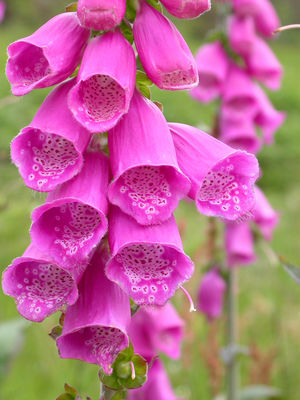 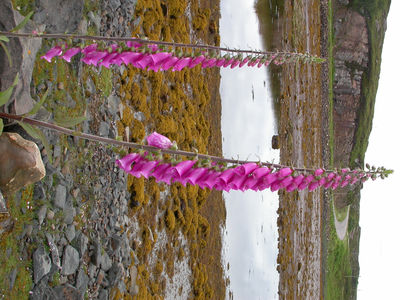 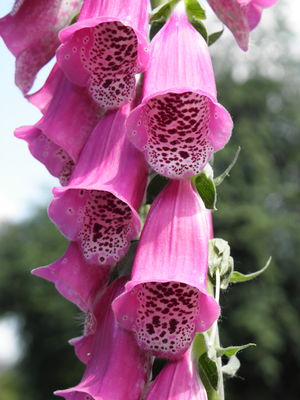 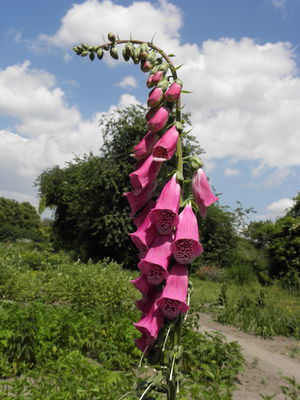 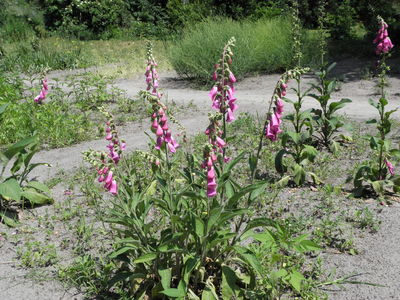 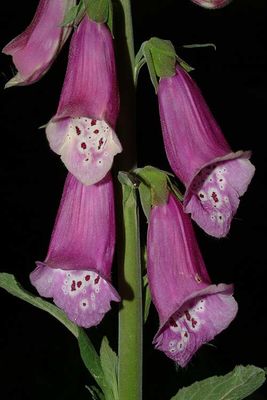 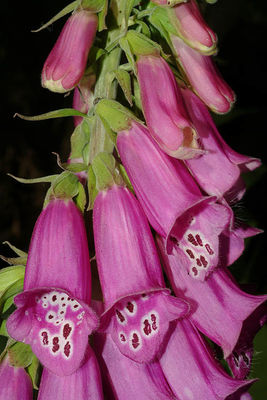 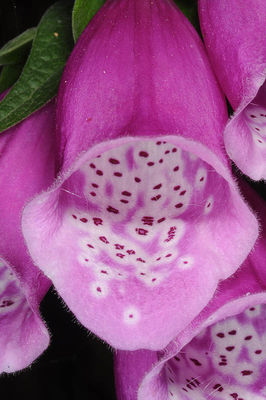 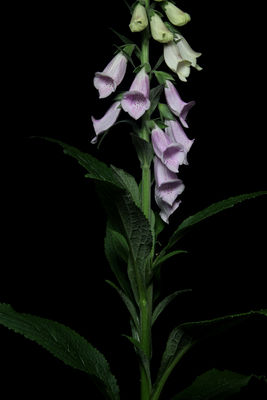 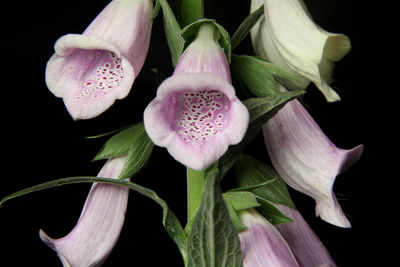 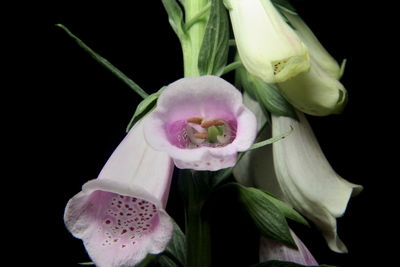 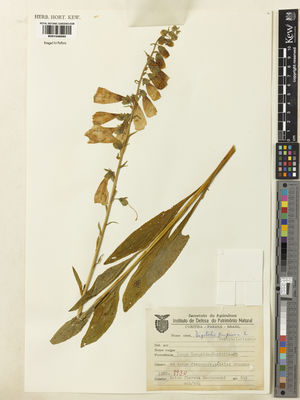 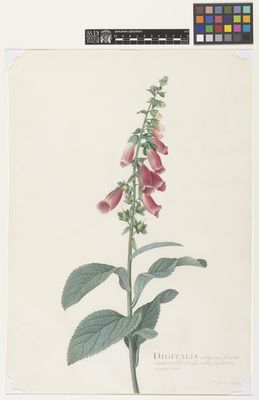 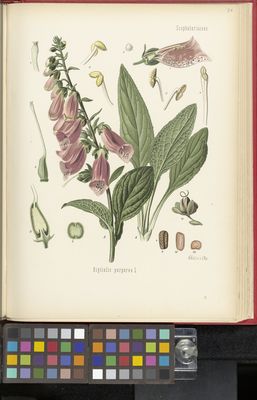 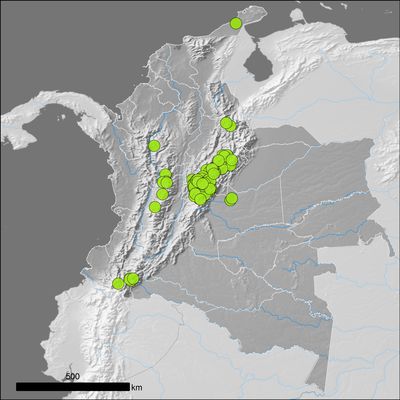