Tea is a shrub grown to produce a beverage made from its leaves. It is appreciated for its stimulant properties and health benefits, and as the centre of social rituals such as the Japanese tea ceremony and British teatime. Two varieties are recognised; Camellia sinensis var. sinensis (Chinese tea) and C. sinensis var. assamica (Assam tea, Indian tea). For centuries it was thought that black and green teas came from different plants. In fact they come from the same species, but black tea is fermented. 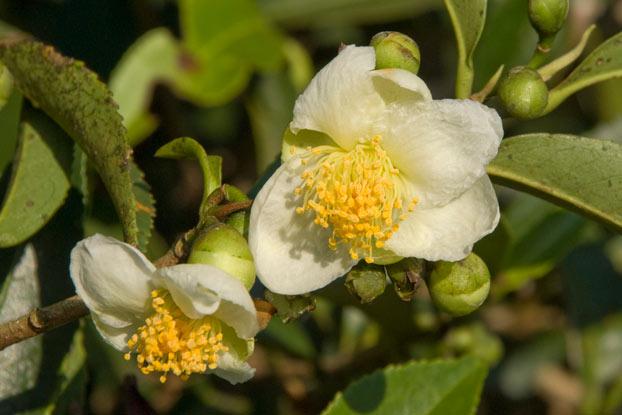 Tea is one of the most important non-alcoholic beverages in the world, and over three million tonnes are grown annually.

Tea is a shrub grown to produce a beverage made from its leaves. It is appreciated for its stimulant properties and health benefits, and as the centre of social rituals such as the Japanese tea ceremony and British teatime. Two varieties are recognised; Camellia sinensis var. sinensis (Chinese tea) and C. sinensis var. assamica (Assam tea, Indian tea). For centuries it was thought that black and green teas came from different plants. In fact they come from the same species, but black tea is fermented.

The origin of tea is not clear. Camellia sinensis var. sinensis is probably native to western Yunnan, while C. sinensis var. assamica is native to the warmer parts of Assam (India), Burma, Thailand, Laos, Cambodia, Vietnam and southern China. 'Wild' tea plants can be found growing in forests, but these may be relics of past cultivation.

Overview: An evergreen shrub, which can grow up to 17 m high. In cultivation, it is usually kept below 2 m high by pruning.

Flowers: Scented, occurring singly or in clusters of two to four.

Fruits: Brownish-green, containing one to four spherical or flattened seeds.

Camellia sinensis var. sinensis is hardier than Assam tea, and has relatively small and narrow leaves. Its leaves are used to produce green tea and China black tea.

C. sinensis var. assamica is much taller in its natural state (than when cultivated) and can grow into a loosely branched tree to a height of about 17 m. It is a less hardy variety with larger, rather droopy, leathery leaves, which are used to make Assam (Indian) black tea.

It is not clear whether a truly 'wild' Camellia sinensis plant still exists.

Camellia sinensis has been considered an invasive pest species in a nature reserve in Tanzania. There are also reports of it spreading into Madagascan forests where it may have detrimental effects on the regeneration of native forests which are important lemur habitats.

In China, tea has been used as a medicinal infusion, for chewing and as a pickle for over 4,000 years. There is written evidence from the T'ang dynasty in AD 650 that tea was being cultivated in most of the provinces of China and that the process of making tea was well established.

Tea was introduced into Japan in about 600 AD by Buddhist priests returning home after studying in China. During the 8th and 9th centuries its use was widespread in courtly and monastic circles and a tea culture developed. By the 1330s  onwards, all Japanese social classes drank tea.

It is has been suggested that tea spread so quickly, and was absorbed into so many different cultures, because of the way it is served - its preparation gives the chance for social interaction and the development of elaborate ceremonies. By the early 1800s, in the heyday of the East India Company, Britain was drinking its way through nine million cups of tea a year. Today, in Britain alone 165 million cups of tea are drunk a day, which equates to 62 billion cups a year; over three million tonnes of tea are produced annually, with India being the largest tea producing country, growing nearly 30% of the world's tea.

In China, the medicinal effects of tea have a history dating back almost 5,000 years. The use of tea in traditional Chinese medicine is well documented and it is suggested that it could be used as a cure for over 200 illnesses.

Tea is not an important medicine in the main medical traditions of South Asia. Medicinally, tea has been most used as a stimulant, as an astringent lotion which may be used as a gargle or injection, for some digestive problems and to reduce sweating in fevers. In Tamil Nadu, tea leaves have been used homeopathically for mania, paralysis, nervousness, neuralgia and sleeplessness.

Tea's stimulant effects are caused by xanthines such as caffeine. Caffeine is included in small doses in some over-the-counter medicines for its stimulant effect, and is often combined with medicines that treat pain, such as aspirin. An infusion of tea leaves was once used as a remedy for insect bites.

Excessive intake of caffeine can cause headaches and anxiety. Regular consumption of large amounts of caffeine, aminophylline or theophylline by breastfeeding mothers can cause irritability and poor sleeping patterns in the infant.

It has been reported that there may be some link between cancer of the oesophagus and excessive tea drinking and the resulting high consumption of condensed tannin compounds. Drinking tea may have diuretic effects, largely due to the caffeine, and tea may also inhibit the absorption of iron in the gut.

The last decade has seen huge interest in tea's medicinal properties. Tea contains the compound theophylline, which is used in a licensed medicine for the treatment of respiratory diseases such as asthma.

Tea also contains flavonoids, compounds reported to have anti-oxidant properties and which may be beneficial to health, such as in the prevention of heart disease and cancer. Tea flavonoids are also reported to reduce inflammation and to have antimicrobial effects.

Some studies suggest that tea may help prevent tooth decay. Tea is also used in some cosmetic products for its astringent effect. The chemical composition of tea may vary depending on a number of factors, such as the conditions in which the plant is grown and how the leaves are processed.

Two collections of Camellia sinensis seeds are held in Kew's Millennium Seed Bank based at Wakehurst in West Sussex.

Tea has been grown from seed at Kew, as well as being brought in as young plants. The tea bushes growing outside in the Woodland Glade were planted in 1992 and have proved to be hardy, surviving snow and winter temperatures of -8˚C.

Mulch is applied around the bushes to encourage healthy growth, and in the spring they are fed with a controlled-release fertiliser. The soil they are grown in has a low pH, which suits tea as it requires acid soil. The bushes are watered during long dry spells.

The plants are slow-growing and produce white flowers in the autumn.

Tea bushes can be seen growing in the Woodland Glade near the Rhizotron and Xstrata Treetop Walkway.

There are over 60 specimens of Camellia sinensis in Kew's Economic Botany Collection. These are available to researchers by appointment.

Tea contains caffeine, theophylline and aminophylline, which can cause undesirable side-effects if consumed in large quantities.

Use Gene Sources
Used as gene sources.
Use Food
Used for food.
Use Medicines
Medical uses.

Use
A major beverage which has given rise to a variety of social conventions in different parts of the world (such as tea ceremonies in Japan, and the concept of a 'tea break' in Britain); also used medicinally as a stimulant. 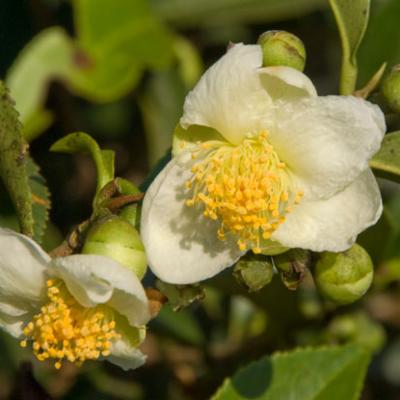 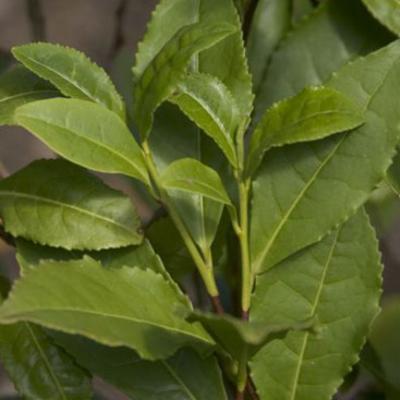 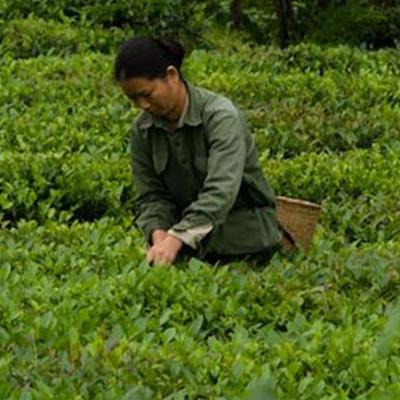 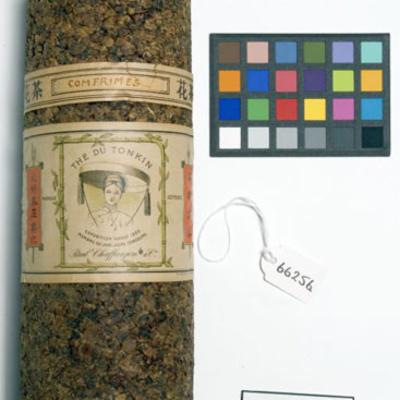 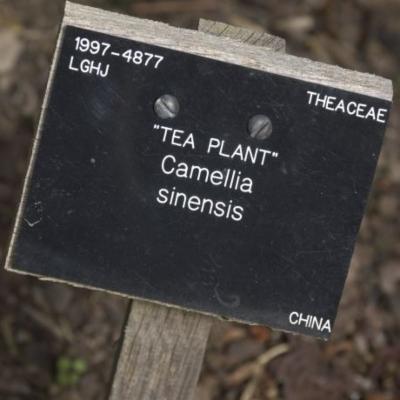 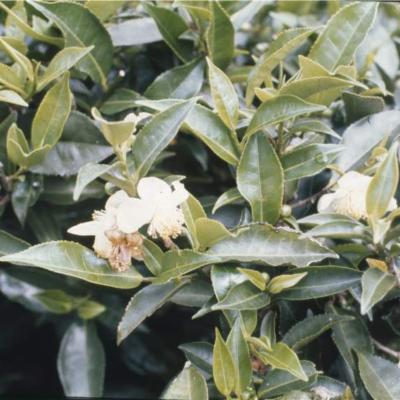 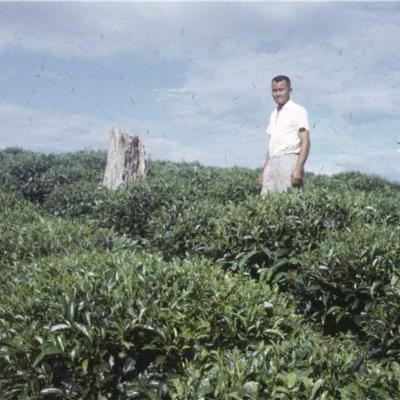 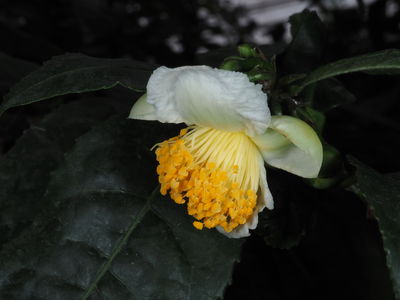 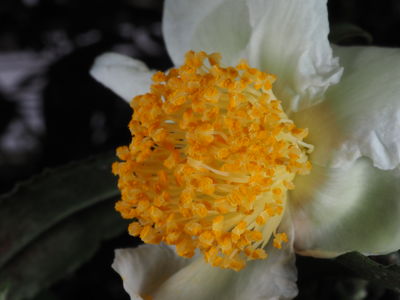 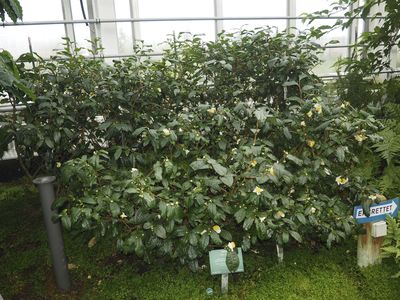 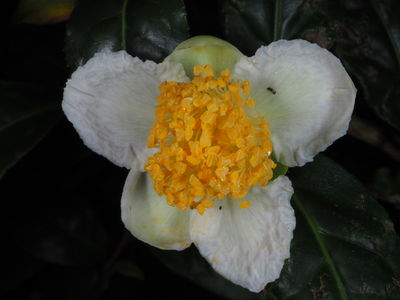 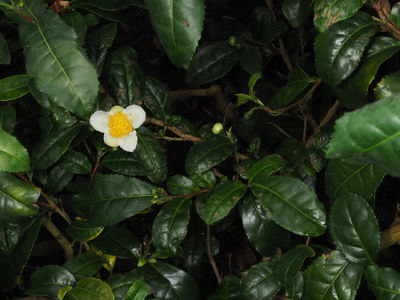 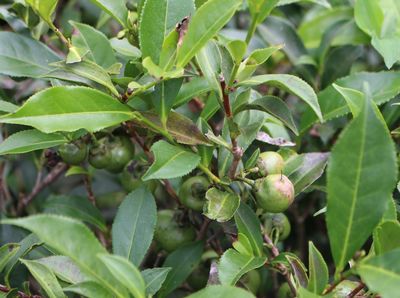 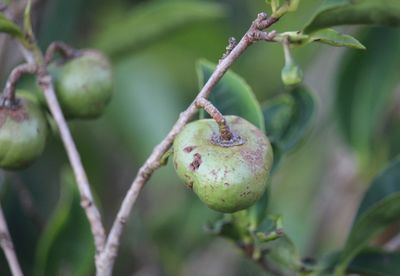 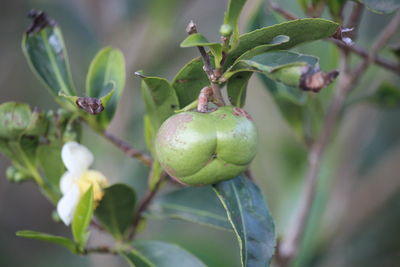 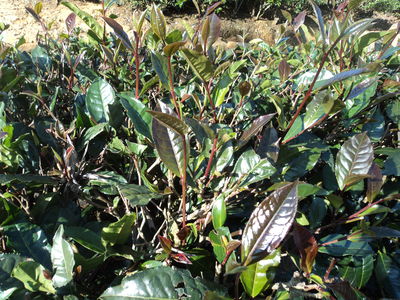 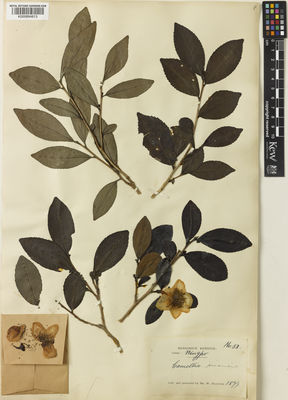 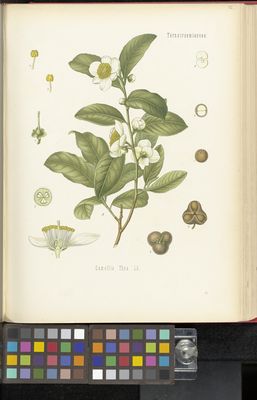 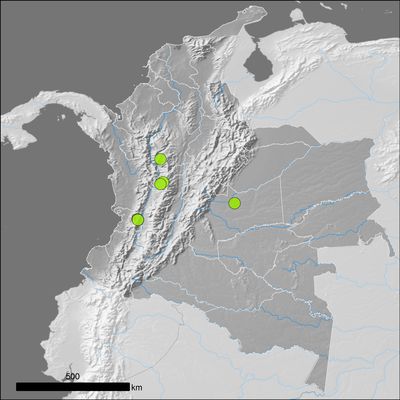 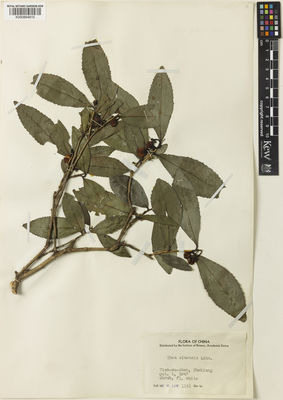