John Sims, a British taxonomist and editor of Curtis's Botanical Magazine, wrote rather brutally in 1822: 'The Paper-Mulberry tree is a shrub of but little beauty; but, both in Japan and in the South-Sea islands, is of the utmost importance for economic purposes'. Despite the comment by Sims, Broussonetia papyrifera has been appreciated by plant-lovers, and grown in Asian and European gardens for many years. Peter Collinson, a keen English amateur gardener, raised plants from seed sent from China as early as 1751, and distributed them among his friends. However, paper mulberry had already been cultivated in Asia and the islands of the Pacific Ocean for many centuries before this - primarily as a source of fibre, food and medicine. 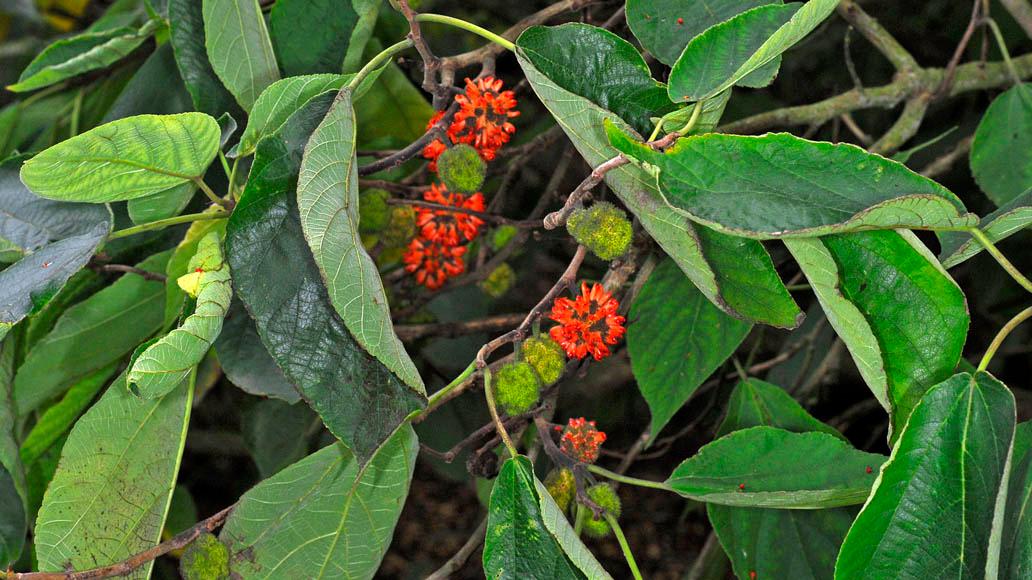 A shrub or tree, with mulberry-like leaves, paper mulberry is important as a source of fibre for cloth and paper.

John Sims, a British taxonomist and editor of Curtis's Botanical Magazine, wrote rather brutally in 1822: 'The Paper-Mulberry tree is a shrub of but little beauty; but, both in Japan and in the South-Sea islands, is of the utmost importance for economic purposes'. Despite the comment by Sims, Broussonetia papyrifera has been appreciated by plant-lovers, and grown in Asian and European gardens for many years. Peter Collinson, a keen English amateur gardener, raised plants from seed sent from China as early as 1751, and distributed them among his friends. However, paper mulberry had already been cultivated in Asia and the islands of the Pacific Ocean for many centuries before this - primarily as a source of fibre, food and medicine.

Native to China, Japan, Korea, Laos, Cambodia, Thailand, Burma and Assam (India), but cultivated extensively elsewhere in Asia and the Pacific, and naturalised in parts of southern Europe and the USA.

Leaves: The rough leaves (which are covered in soft hairs when young) are about 15 cm long, borne on a stalk, toothed at the margins, dark green on the upper side, and paler and woolly beneath. The leaf shape is variable. Some leaves are deeply lobed, while others (even on the same shoot) can be unlobed.

Flowers: The male and female flowers are borne on separate plants, the female flowers being greenish and held in round heads, the male plants bearing catkins (paper mulberry is wind-pollinated).

Fruits: The edible fruits are orange-red, round or pear-shaped, and split into three parts to reveal a spongy, white inner surface.

Broussonetia papyrifera was first thought by botanists to be a kind of mulberry ( Morus species), but was later placed in the genus Broussonetia , which was named after Pierre Broussonet (1761-1807), a French naturalist and Director and Professor of Botany at Le Jardin des Plantes de Montpellier (the botanic garden at Montpellier).

Paper mulberry played a significant role in the development of paper-making, and is one of the plants mentioned in the Chinese classic Shih Ching ('Book of Poetry'), which contains a collection of folk songs, odes and sacrificial psalms composed between 1,000 and 500 BC, and is said to have been edited by Confucius. For centuries, the fibre from the inner bark of paper mulberry has been used to make paper in Japan and textiles throughout the Pacific. In both cases the raw material is the soft, inner bark. For paper-making, the inner bark is pounded and mixed with water, and the resulting paste then spread evenly on a mesh to make 'washi' (Japanese handmade paper). Paper-making with paper mulberry fibre was established in China by around 100 AD, and reached Japan by about 600 AD.

In contrast, in the Pacific region textiles are made by beating together strips of inner bark. This tapa cloth is used for various items of clothing, such as sarongs, scarves and hats, as well as for making bags and other items such as bedding. Until relatively recently, tapa cloth was the main source of clothing worn on Pacific islands such as Fiji, Tonga and Tahiti. Tapa cloth is still worn on ceremonial occasions, during festivals and for traditional dances. The bark fibres (and indeed the roots) can also be made into rope and cord. The wood is light and easily worked, and is used for making cups, bowls and furniture.

The fruits of Broussonetia papyrifera are edible, as are the young leaves, when steamed. The leaves, fruit and bark have a variety of traditional medicinal uses. In China the leaves are fed to silk-worms.

Paper mulberry is a vigorous pioneer species, which can rapidly colonise forest clearings and abandoned farmland. Its ability to colonise degraded lands may make it suitable for reforestation programmes in some situations, although it can become invasive when both male and female trees are present, followed by pollination and seed set. Paper mulberry is frequently planted as a shade tree. It tolerates air pollution, making it suitable for planting along roadsides and in urban settings. It is also grown as an ornamental in parks and gardens. The tree is widely coppiced for tapa and paper production, with the young trees cut every 12-18 months.

Paper mulberry is a fast-growing tree, which often produces suckers from its roots. It is grown in many subtropical and warm temperate regions. It will grow on any well-drained soil, and performs best in a sheltered place in full sun. In England, paper mulberry usually grows into a large shrub or small tree, but can grow into a large tree in areas with long, hot summers. It can withstand temperatures down to at least -5°C. When grown for paper-making, it is coppiced (regularly cut at near ground level) to produce a shrubby bush. Propagation is by seed, cuttings or root suckers.

There is a small grove of paper mulberry trees to the north of King William's Temple at Kew; other specimens can be seen in Westwood Valley at Wakehurst.

Pressed and dried specimens of Broussonetia papyrifera are held in Kew's Herbarium, where they are available to researchers by appointment. The details of some of these specimens, including images, can be seen online in the Herbarium Catalogue.

Specimens of paper mulberry wood, bark, and paper and cloth products (including fans, envelopes, a bowl, kite, parasol, coat, cloak, hat, dresses and shoes) are held in Kew's Economic Botany Collection, where they are available to researchers, by appointment.

Items of particular importance are the paper products collected by Sir Harry Parkes in the 19th century and examples of tapa cloth from Polynesia (one of which was made by the wife of one of the mutineers of the HMS Bounty, the vessel captained by William Bligh in order to collect breadfruit plants, Artocarpus altilis , and take them to the Caribbean). Some of the garments made from paper mulberry are on public display in the Plants + People Exhibition in Museum No. 1.

Collections made by Sir Harry Parkes

Many of the items made from paper mulberry in the Economic Botany Collection were collected in Japan by Sir Harry Parkes (British Consul in Japan from 1865 to 1883, and pioneer of Anglo-Japanese relations). Parkes had been requested by the then Foreign Secretary, Earl Clarendon, to gather information on paper-making in Japan (after Prime Minister William Gladstone had heard of the exceptional quality of the paper products made there). It was hoped that British manufacturers could gain valuable knowledge from Japanese expertise. Kew's Director at the time, Sir William Hooker, also requested Parkes to collect specimens for scientific study, and over the next few years Parkes collected over 400 examples of paper and paper products. Some of the items in the Parkes' collection, including garments made from paper mulberry, are on public display in the Plants + People Exhibition in Museum No. 1.

Distribution
Cambodia, China, India, Japan, Laos, Myanmar, Thailand
Ecology
Mixed deciduous and evergreen woodland, forest margins and secondary vegetation; a pioneer of disturbed sites.
Conservation
Not known to be threatened; it has become an invasive weed in some areas of the USA.
Hazards

The pollen can cause allergic reactions.

Use
Cloth- and paper-making, medicinal, ornamental. 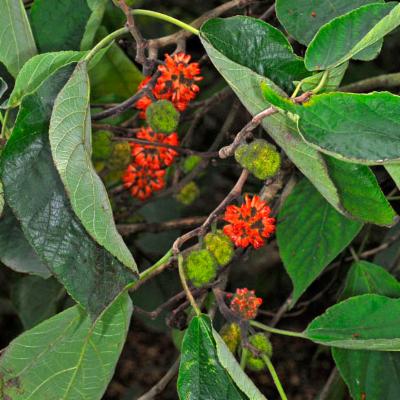 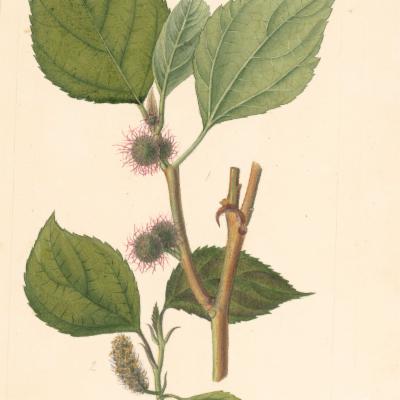 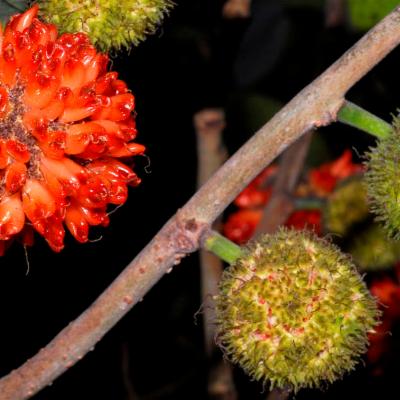 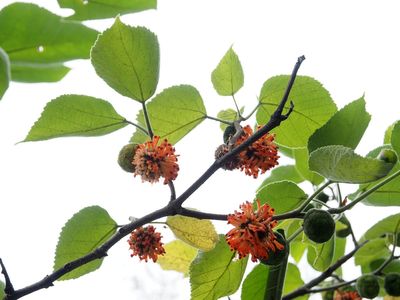 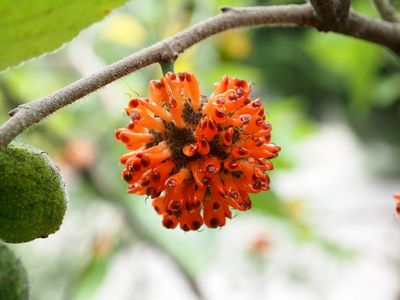 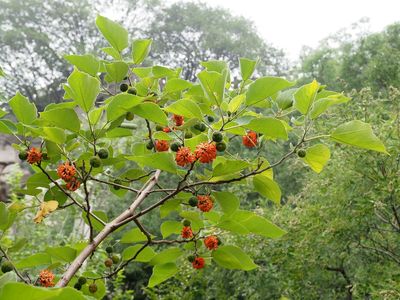 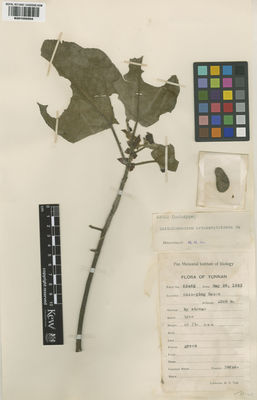