This 'thermal' waterlily, which grew around freshwater hot springs, was discovered in 1987 by German botanist Professor Eberhard Fischer of Koblenz-Landau University. It is known from just one location in Mashyuza, in southwest Rwanda. However, it disappeared from there about two years ago due to over-exploitation of the hot spring that fed this fragile habitat. Water was prevented from reaching the surface, resulting in the desiccation of the few square metres where this species grew, and no plant is known to have survived in the wild. 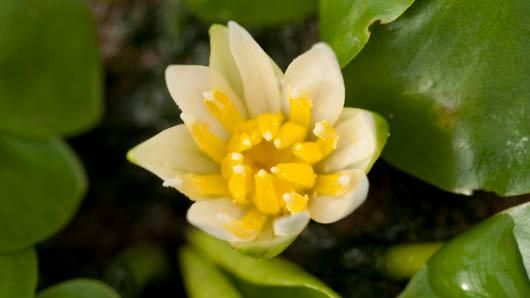 General Description
Nymphaea thermarum is the smallest waterlily in the world, and the only Nymphaea to grow in damp mud rather than water.

This 'thermal' waterlily, which grew around freshwater hot springs, was discovered in 1987 by German botanist Professor Eberhard Fischer of Koblenz-Landau University. It is known from just one location in Mashyuza, in southwest Rwanda. However, it disappeared from there about two years ago due to over-exploitation of the hot spring that fed this fragile habitat. Water was prevented from reaching the surface, resulting in the desiccation of the few square metres where this species grew, and no plant is known to have survived in the wild.

Before becoming extinct in the wild, Nymphaea thermarum occurred in Mashyuza, southwest Rwanda (Africa). At present all the extant plants are in cultivation at Kew and in Germany.

A tiny waterlily, forming rosettes 10-20 cm wide and comprising bright green lily pads (laminas) with short petioles. The lily pads can be as little as 1 cm in diameter. The central growing tip sinks in the wet mud, preventing the developing pads from drying out before unfurling.

The flowers are white with yellow stamens, and can be self-pollinating. Blooms open early in the morning and close in early afternoon. The flowers are held vertically, a few centimetres above the plant, but once they have finished their flowering cycle the petiole bends so that the fruit is in contact with the damp mud. Once it is mature, the fruit dissolves releasing the seeds. Reproduction is by seed only.

The only population of this species has died out as a consequence of over-exploitation of the aquifer that fed the hot spring that kept the plants moist and at a constant temperature.

However, since this species is now easily propagated and cultivated at Kew, and the spring water is still flowing (but sequestered before it reaches the surface), there could be an opportunity to restore the site and reintroduce Nymphaea thermarum to Rwanda.

This species has always been so rare that no uses have ever been known. However, Nymphaea thermarum could have potential as a parent for ornamental hybrids, with the benefit of producing tiny plants that do not need a pond to grow and bloom. Some other species of waterlily are used locally as a source of food, such as Euryale ferox seeds in Asia and some Australian species that are commonly consumed by Aboriginal populations. However, some of the approximately 50 species of waterlily are toxic if large quantities are eaten.

This is an unusual waterlily species, as it does not grow in deep water. A small plant pot should be filled to the top with fine loam, and then placed in a water-tight container which is wider and slightly higher than the pot. The container should then be filled with water to exactly the level of the top of the pot and soil. Once the soil is damp and has settled, it should be removed from the water-tight containers and then seeds can be thinly sprinkled on to the surface. The water level is crucial (it must not go down more than 2 mm or up more than 0.5 mm), and the seeds must remain wet but very close to the surface so that when they germinate they are exposed to the air. The seedlings should be kept at 22-26 ˚C and the first leaves will then soon be produced. Seedlings should be exposed to full sunlight. Seedlings should be pricked out into individual pots when they are large enough to handle (usually when there are five leaves of 5 mm in diameter). A few months later the flowers should appear.

There are over 50 Nymphaea thermarum plants in the Living Collection at Kew, which is the only place in the world where it is being propagated regularly and in large quantities.

Back from the brink of extinction

In 2010, Kew's top propagation 'code-breaker', horticulturist Carlos Magdalena, cracked the enigma of growing a rare species of African waterlily - believed to be the smallest waterlily in the world with pads as little as 1 cm in diameter.

Nymphaea thermarum , was discovered in 1987 by German botanist Professor Eberhard Fischer. It was restricted to just one known location in Mashyuza, Rwanda. However, it disappeared from this location about two years ago due to over-exploitation of the hot spring that fed this fragile habitat, and no plant is known to have survived in the wild.

Soon after its discovery, Professor Fischer realised that the species was in jeopardy and he transported a few plants to Bonn Botanic Gardens. At Bonn, horticulturists were very successful at growing these valuable specimens, and they lasted for more than a decade. However, the species proved extremely difficult to propagate.

As a result of a conservation plant exchange between Bonn and Kew, a handful of seeds and pre-germinated seedlings reached Kew in July 2009. The N. thermarum seedlings were initially grown submerged under water like any other waterlily. But, at both botanic gardens, this method was unsatisfactory; seedlings were barely clinging on to life and did not develop to adult stages.

Nymphaea seedlings. All Nymphaea other than N. thermarum are germinated totally under water.

Carlos, who has a track record of bringing the rarest and most difficult plants back from the brink, took on the challenge of propagating N. thermarum . He ran a series of trials involving a range of temperatures, water hardness, pH and depth. Plants grown in harder water at shallower depths seemed to develop further; however no plant reached maturity.

Carlos then decided to investigate ways to alter the concentration of gases in the water, and to gather information on the natural habitat. Returning to the original German description of the species supplied the final clue: 'it grows in damp mud caused by the overflow of a hot spring. Water reaches the surface at 50 °C but the plant colonizes an area where the water has cooled to a temperature of 25 °C'. This meant that, unlike all other known waterlily species, N. thermarum did not grow submerged in the deep waters of lakes, rivers or marshes. The revelation was that this small, extremely rare and unusual species, grows in the damp conditions at the edge of a thermal hot spring - and this was the vital clue needed to crack the code.

With this knowledge Carlos did one final trial. He placed seeds and seedlings in pots of loam within small containers filled with water, thus keeping the water at the same level as the surface of the compost, at a temperature of 25 °C. In this way, the last remaining individuals of the species could be exposed to the higher concentrations of carbon dioxide and oxygen in the air. And to his surprise and joy, soon the plants started to improve and after a few weeks, eight plants began to flourish, growing to maturity with thicker, greener and wider leaves. In November 2009, Kew's collection of N. thermarum flowered for the first time.

Distribution
Rwanda
Ecology
Damp mud created by the overflow of a freshwater hot spring, where the water has cooled to 25˚C.
Conservation
Classed by the IUCN Red List as Extinct in the Wild (EW).
Hazards

Use
This species has always been so rare that no uses have ever been known. 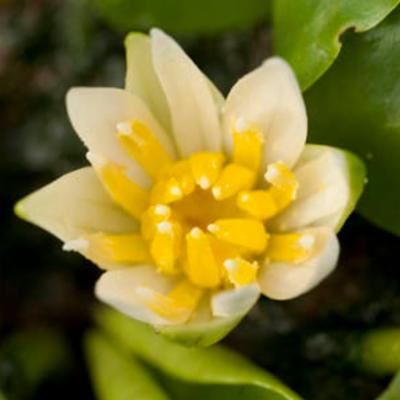 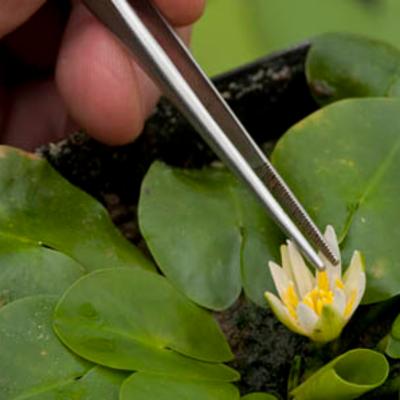 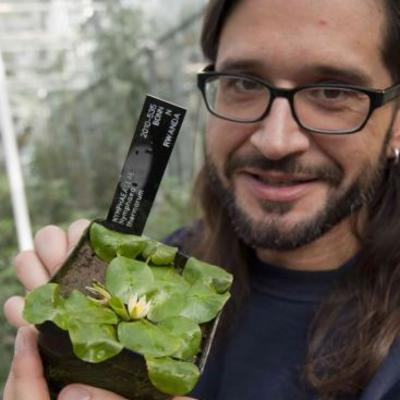 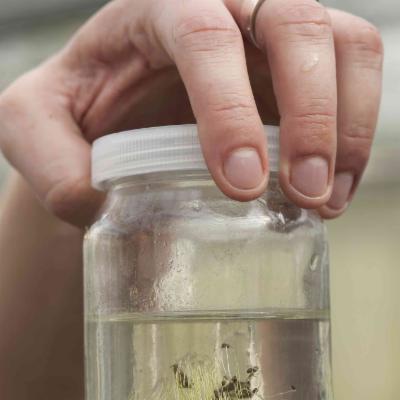